A Journey along the Cauvery

February 01, 2015
Taking a break from my regular posts, I am sharing today an article that was published in Rail Bandhu a while back, titled - A Hymn called the Cauvery 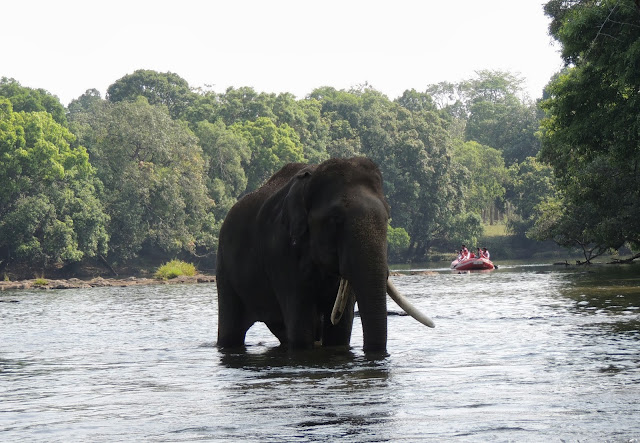 We stand atop the mountain, and peer into a tank. Around us are the lush green mountains of the Western Ghats, and, it seems apt that a river as holy as the Cauvery should originate here, in the Brahmagiri Ranges of Coorg, Karnataka. She bubbles forth as a spring, in this tank, during the monsoon months, and then flows down as a river from the foothills, giving the place its name -‘Talacauvery’. It is at these foothills, at Bhagamandala, that we first see her as a river, and this is also where she meets the first of her many sisters. Here, she merges with the mountain stream Kannike, and the invisible (and maybe mythical) Sujyothi, to form the Cauvery, as we know her. A temple at Bhagamandala enshrines both, Vishnu and Shiva, and the Cauvery, when she is in full flow, washes the steps of the temple, as if paying obeisance to them both.

The Cauvery is so inextricably linked with legends and myths that it is impossible to separate them. Long, long ago, it is said, the Sage Agasthya came here, a kamandalu in his hand. That was all he owned, and it was more precious to him than anything else, for the vessel contained the sacred Cauvery, without whom he couldn’t perform his daily prayers. Cauvery, on the other hand, yearned for freedom. She wished to be untamed like the river she was, flowing as she willed. The gods fulfilled her wish, and sent Ganesha in the form of a crow, to overturn the kamandalu, and set Cauvery free. Cauvery jumped at the chance, and flowed out of the vessel, and the land she touched came alive. Agasthya, realizing his selfishness, blessed Cauvery that she would be the most sacred among all the rivers here, and even the Ganga would come to her to cleanse herself.

We meet the Cauvery often, as we journey across Coorg, at Kushalnagar, Dubare, and through the forests of Nagarhole National Park. She divides herself into two at Srirangapatna, only to come together once more, as if garlanding the Lord whose abode this island is. Nearby, there are more islands, not home to Gods, but to birds. This is the Ranganathittu Bird Sanctuary , which hosts birds that come here from near and afar, to nest, and to nurture their fledglings on her banks. A little further downstream, we stand at the steps of another temple – The Gunja Narasimhaswamy temple at T. Narsipur. The T here stands for Thirummukkudalu – the place where three rivers merge. The rivers in question are the Cauvery, the Kabini, and the Gupta Gamini (again, an invisible river, or spring). The convergence of three rivers makes this site as holy as the Triveni Sangam of the Ganga, Yamuna and Saraswati, at Allahabad, and besides, the sage Agasthya proclaimed it to be as holy as Kashi.

The Cauvery flows tumultuously, and cares nothing for mountains and gorges. She falls across them gracefully, and yet with splendor, as if she enjoys the challenge and revels in it! Through her course, she flows to her will, diverging here, and merging there, creating numerous islands in her wake. At Shivanasamudra, she falls majestically from a height of 98m, drawing multitudes to see her in her prime. At the base are temples again, to Lord Vishnu, who is her constant companion on her journey.
She meets the Arakavati at Mekedatu, flowing through a gorge which appears too narrow for her. Here, she has worn such holes in the rock that the place abounds with myths and legends about a goat which leapt across the gorge for safety, and gave the place its name! (Mekedatu in Kannada means ‘goat’s leap’!) She continues over the rocky landscape, seemingly least bothered about such trivial aspects, and, at the border of Karnataka and Tamilnadu, at Hogenakkal, she falls spectacularly over the rocks, the force bringing up such a spray that it appears to be steam rising from the river!

Once she enters Tamilnadu, she seems to slow down, as if she is suddenly older, more mature. Almost at once, she merges with the Amaravathi River near Erode, and then the Noyyal near Kodumudi. One of the holiest places here is the town of Bhavani, where the river of the same name merges with the Cauvery and the Amrutavahini. Again, three rivers merging makes this an exceptionally holy site, and the Lord here is known as Sangameshwarar – presiding over the sacred sangam or confluence.  From here, she is the Akhanda Cauvery – the great river, much bigger in size than before, and also peaceful, unlike her earlier, younger self!

She splits once more, to form the island of Srirangam, once again garlanding the Lord, as at Srirangapatna and Sivanasamudra. Together, these three form an important pilgrimage for Vaishnavites, as it is believed that to see the Lord at all three places in a day will bring us the blessings of the Lord as well as the Cauvery. Beyond Srirangam and Trichy, she takes on a completely new form – splitting into many tributaries, which spread across the region, forming the Cauvery Delta.

Interestingly, while the Cauvery continues to split and create a network through the area, it is her tributary, the Kollidam, which merges with the others and becomes the stronger river. The Cauvery here is thus the mother, intent on nurturing the land before she reaches her destination! At Thiruvaiyaru, five of her tributaries flow at once, surrounding the town, giving the Lord who resides here, the name ‘Pancha Nadeeswarar’ – the Lord of the Five rivers. Here, on her banks lived the great musical Saint, Thyagaraja, and where, each year, on his anniversary, millions of musicians and music lovers gather, to pay tribute to him, by singing his songs. At Kumbakonam, the temple tanks, originally formed by her flow, are considered as and even more sacred than the Ganga. Here are temples dedicated to the holy rivers, in the belief that they come here to bathe in the Cauvery, to rid themselves of the sins of those who have bathed in them. Agasthya’s blessing to Cauvery thus lives on, in the minds and hearts of the people here, who head to Kumbakonam once every 12 years for the Mahamagam, an event equivalent to the Kumbha Mela of the north.

She flows past Thanjavur, where the Chola rulers built their magnificent temples, and through numerous small towns and villages where she merges and separates from her many sisters. At Mayiladudurai or Mayavaram, where Shiva appeared as a Peacock, she bisects the town into two halves, and people flock to bathe here on auspicious days. From here, she flows quickly towards the sea, as if in a hurry to reach her destination. She is not the meandering maiden anymore, but the single minded devotee who aims to merge with her Lord, the Ocean. It is at Poompuhar that she achieves her aim, creating an estuary that once used to be the most important port in ancient India. Time and tide though have washed all signs of that ancient prosperity, and as we stand there today, all we can see is a tired river merging into the sea, as if relieved that her journey is at an end.

As I stand there, at her final destination, I think of how she has changed, over the course of 800 Km. From a frolicking river bouncing over the rocks, to the graceful one, flowing strong, but at peace, to the benevolent life giver – I can understand at last why we think of her of a woman!

The Cauvery is not easy to follow. She cannot be easily navigated, nor can we trace her path along roads. Hers is a journey to be experienced in parts.

Talacauvery and Bhagamandala in Coorg, are only accessible by road. The nearest railway stations are Mysore or Mangalore, depending on where you are coming from.

Srirangapatna is the first major stop on the Cauvery with a railway station, well connected to the rest of the country.

Mysore is the hub for exploring the Cauvery in Karnataka. T.Narsipur (30 km) is nearby, as is Shivanasamudra (70 Km).

Bangalore is the next stop, for Mekedatu Sangama (100 Km) and Hogenakkal (150 Km).
Hogenakkal is more easily accessible from Tamilnadu, Dharmapuri being the nearest railway station (47Km).

Within Tamilnadu, the railway line follows the Cauvery, since most towns are on her banks. Erode, Kodumudi and Bhavani are all railway stations on the Southern Railway, and the temples and Sangamas are nearby. Interestingly, along this route, is a railway station named after the river – Cauvery Junction! Few trains stop here though!

The temples at Srirangam, Trichy, Thanjavur, Kumbakonam, and Mayavaram are all near the respective railway stations.

Poompuhar is only accessible by road, and there is no shrine or temple for the Cauvery here.

This article was originally published in the October 2014 issue of Rail Bandhu, the official magazine of Indian Railways. The photograph is my own and was also published in the magazine along with the article.