Taking the train to a journey back in time

September 22, 2015
“Aap itni door aayi hain is train mein safar karne?” (You have come this far just to travel by this train) exclaimed my driver, when I informed him that I had come from Mumbai to travel by the local meter gauge train from Mhow to Patalpani, Kalakund and back. “Yes” I replied. The century old train is part of our disappearing history, and I wanted to experience at least some of it before it faded into oblivion. It took him a while to digest that logic, and when he did, he came up with another question “Main bhi aapke saath aa sakta hoon? (Can I come along with you?) Amused at the turn around, I agreed, and he went on to tell me that though he had driven tourists across the country, he had never even heard of this little train which passed so close to his hometown! 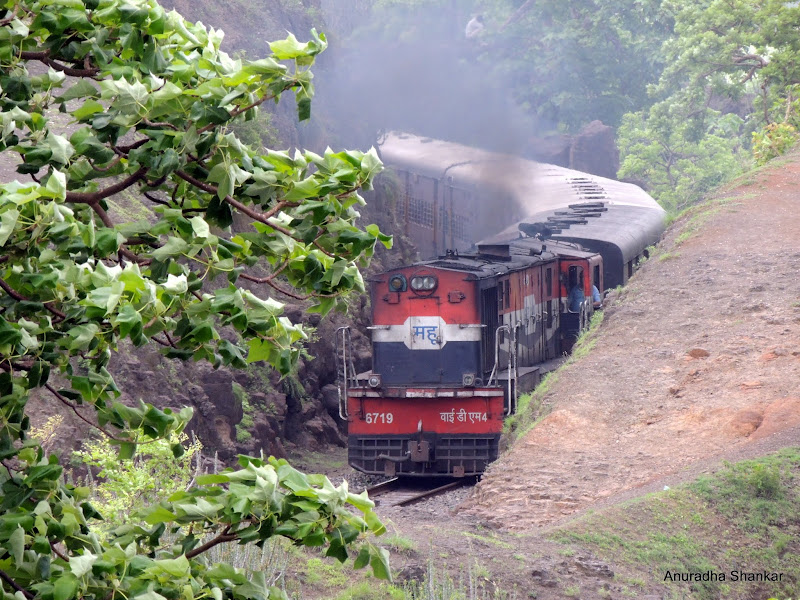 The Mhow – Patalpani – Kalakund section is a scenic ride through the Ghats. The meter gauge tracks here were laid in the 1870s by the Holkar State Railways as part of the Indore – Khandwa route. The tracks were later extended all the way to Ajmer in Rajasthan and Akola in Maharashtra, from where the line connected with other railways. Together, they formed an excellent network in Central India. Times have now changed, with new lines coming up, and gauge conversion in progress, these meter gauge tracks are being rendered unserviceable. Today, the only trains here run from Mhow to Akola, via Khandwa. It would have been great to traverse the entire route, but for now, I wanted to experience the Ghat section, immediately after the first rains of the season.

The weather was perfect as we drove from Indore to Mhow, and we headed to the station, meeting a long-time friend along the way. We had plenty of time to board our train; or so we thought. A long whistle and running people alerted us that the train was, for once, exactly on time! By the time we entered the station and bought our tickets, the train was already moving. “Run” shouted my friend, and we all did, managing to pull ourselves on board, before it picked up speed!

We were laughing as we made our way to a row of vacant wooden seats. Never before had I boarded a running train! This was surely going to be a memorable trip, in more ways than I had imagined!

The first section of our journey was short. We alighted at Patalpani, to take a closer and more leisurely look at the waterfall which gave the village its name.


A short walk along the tracks brought us to the edge of the plateau, where the Ghat section begins, and the Choral River falls from a height of 150 ft into a pool, whose depth is not known. It is believed that the water goes down all the way to Patal, or the netherworld, and hence the name. The recent rains had ensured that there was water, though the flow wasn’t as strong as it might have been. 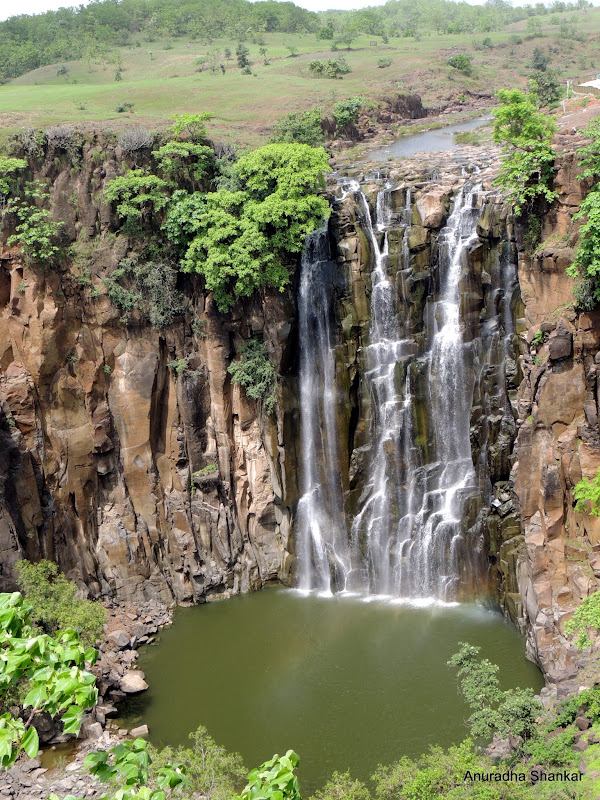 At the edge of the Ghat, just before the waterfall, was a simple shrine, dedicated to Tantya Bhil, a local Robin Hood from the tribal community. It is said that he and his band of men looted the British convoys passing through these Ghats and passed on the bounty to the poor, who, not surprisingly considered him their benefactor and god! He was such a terror to the British, that Special Forces were deployed to bring him to justice. He was eventually caught and hung, but his memory lives on in the form of this small shrine, which is maintained by the railways. Every train heading by towards the Ghats halts here to pay respects to him, with firm belief that not doing so would result in accidents!


Amused by the stories, and soothed by the ambiance, we spent a peaceful hour by the waterfalls before making our way back to the station, only to be told that the next train had been delayed. We had another hour to while away, which we did, sitting outside, chatting with each other, and watching all the happenings in this small railway station. 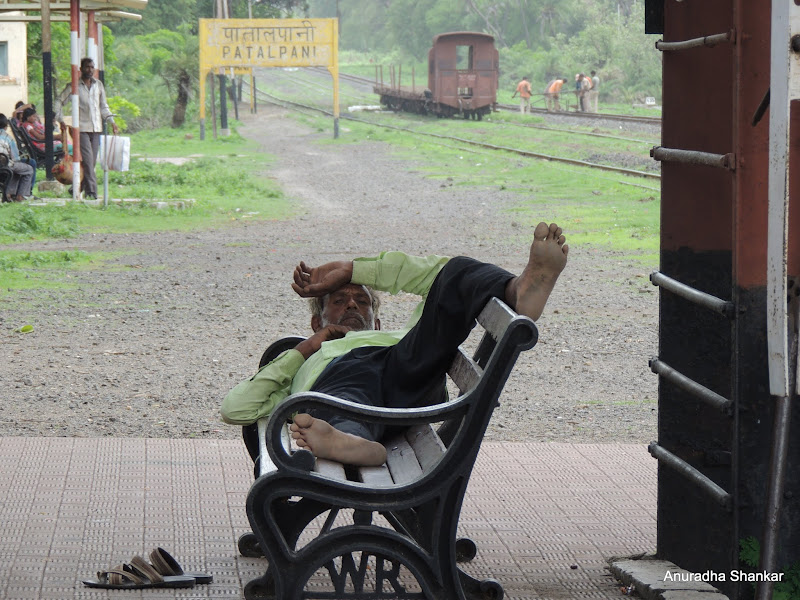 An old man lay stretched out on one of the benches, opening his eyes to glare at me as I clicked his photo; another smiled and posed. A bunch of men clearing the tracks and replacing sleepers paused in their work to stare. A woman simply stood by a goods wagon, and I wondered what she was up to. Then, it was time for lunch and the steel tiffin carriers appeared. The woman roused herself and served water from a can by her side. They all moved to the shade of a tree for their hard earned lunch, and a siesta. Meanwhile, the dogs scented the biscuits which were our substitutes for lunch, and demanded their share! A flock of Yellow Footed Green Pigeons swooped in and perched on a tree, distracting us.


A whistle alerted everyone to a train approaching. It wasn’t ours, but was heading towards Mhow. Suddenly, the place came alive. Passengers hurried in, many carrying firewood collected in the forest. A little boy came running, carrying a basket of jamuns to sell. The sleeping gentleman woke up, and unearthed the signal flags. A younger man hurried to his position to man the points. The train arrived and the station master walked out, swaggering in his uniform, clearly in charge. Someone hurried up to detach the second engine, and the train went on its way. The engine moved off, ready to be hitched to the next train. Once again, everything was quiet. People went off to sleep, while we continued our wait. 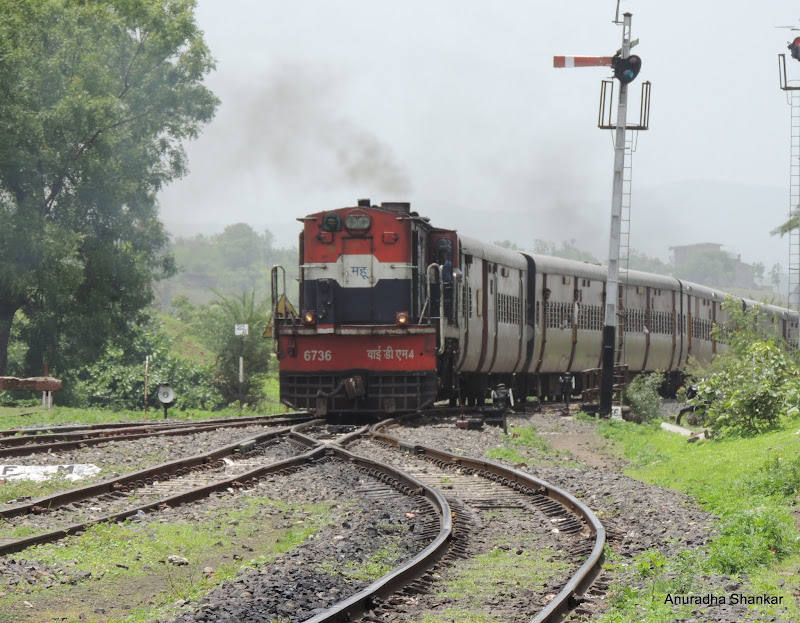 Our train arrived, and the bustle recommenced. We were ready with our tickets, and clambered up, only to find the train packed. Someone made space, allowing me the privilege of a window seat, in consideration of my camera, and off we went, heading towards the Ghats. 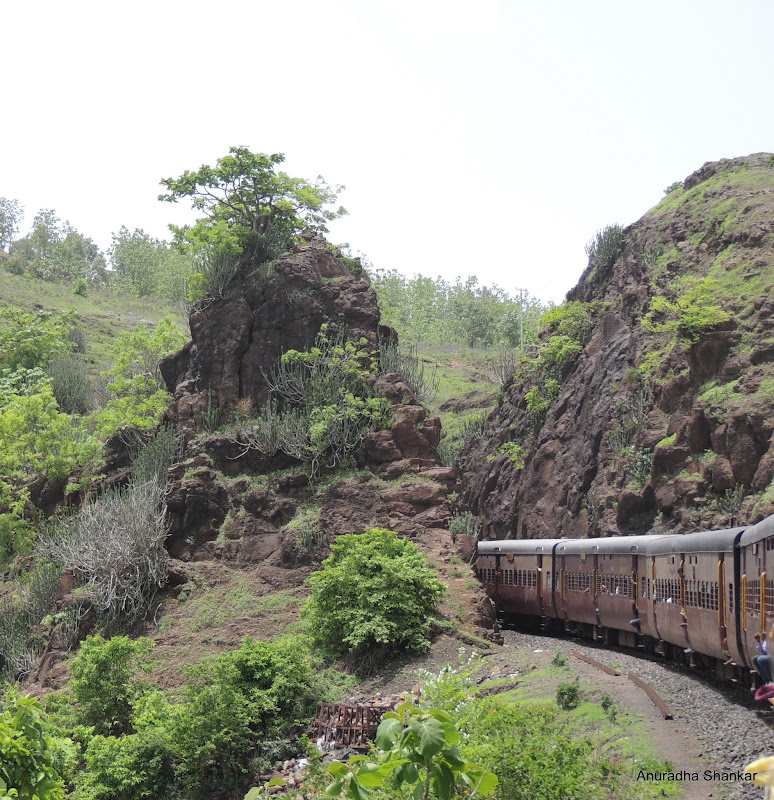 The tracks wove their way around the mountains, passing through tunnels and over aqueducts.  The Patalpani waterfalls were visible through the gaps between massive boulders, and I could imagine just how impressive it would be, once the monsoons set in. As the train took us through the plateau, and towards the plains, the lush greenery soothed our eyes. The jungle was dense, and teak dominated the landscape. Someone spoke of tigers still being seen, and leopards the biggest threat to cattle. We were just a few miles from Indore, but it was if we had entered another world. 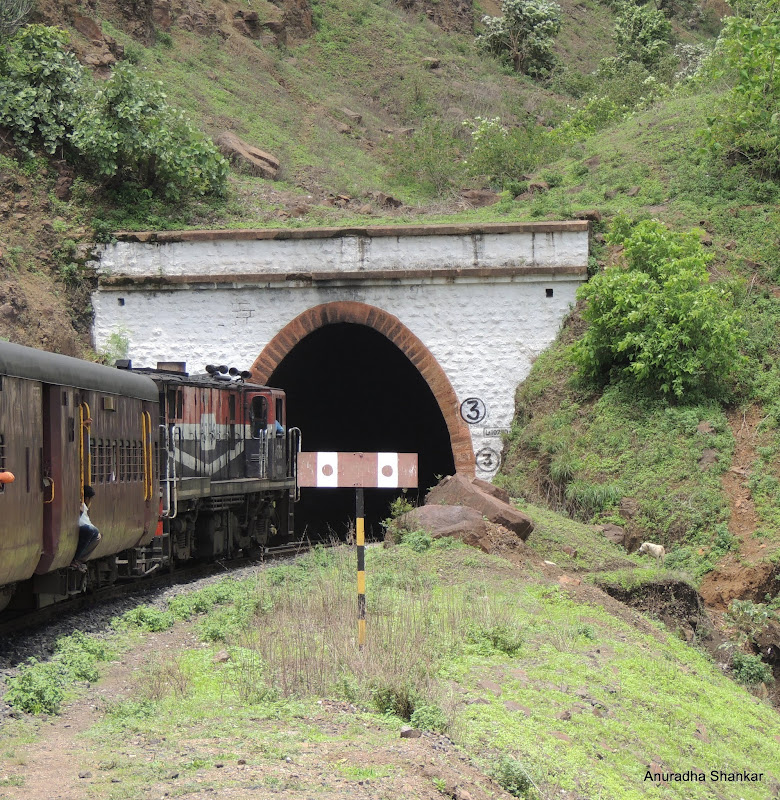 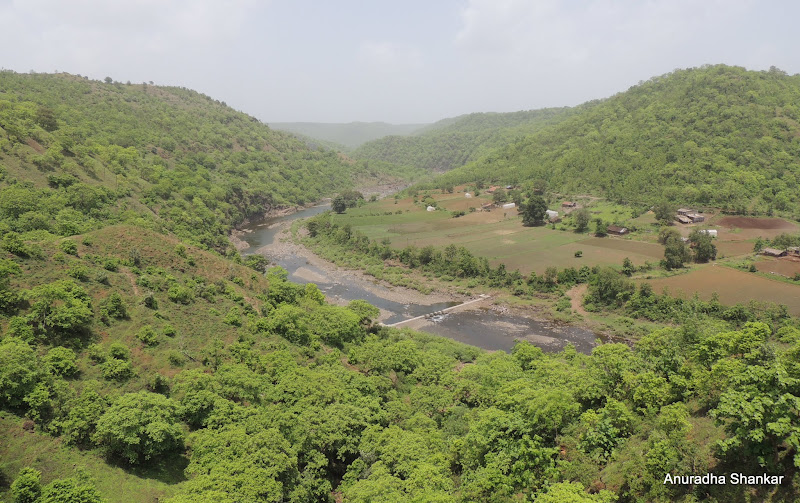 Kalakund was a quaint station, slightly bigger than Patalpani, with vendors selling eatables in carts. The station itself was pretty, in an old world style, probably the original structure built here when the tracks were laid. The sole shop here belonged to Dubey ji, who sold the famous Kalakand (a sweet made of milk and sugar) of Kalakund. His grandfather had started the shop, over a century ago, and he still kept the tradition alive, not an easy matter these days. 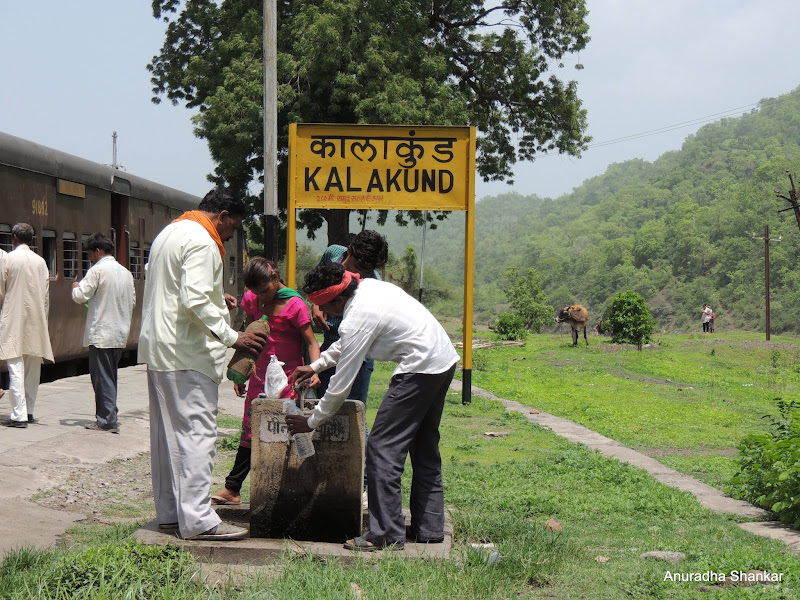 We asked him about the name of this village, and if it had anything to do with the sweet. He laughed, and told us to look around - at the mountains which surrounded us. “This place is like a kund, a reservoir, in the middle of the mountains, which tower over, and appear black when they are backlit. That is why it is kala-kund” This was an interesting analogy for a valley, one I hadn’t come across before. Talk drifted back to his delicious Kalakand, and, buying some for my son back home, we bid him goodbye, and headed to the river which flowed just behind the station.


While the others walked down to the river, I elected to stay behind, sitting on the rise, basking in the warmth of the afternoon sun. An engine made its way down the tracks, readying to haul the next train up the Ghats. A group of picnickers arrived, carrying food packed in baskets, and sat down to enjoy their meal; an old man called out, pointing to himself and then at me. For a moment, I was nonplussed, but then, realization struck, and I pointed the camera at him. He beamed, and stood ramrod straight, as I clicked, and then, waved enthusiastically before getting back to whatever he was doing! 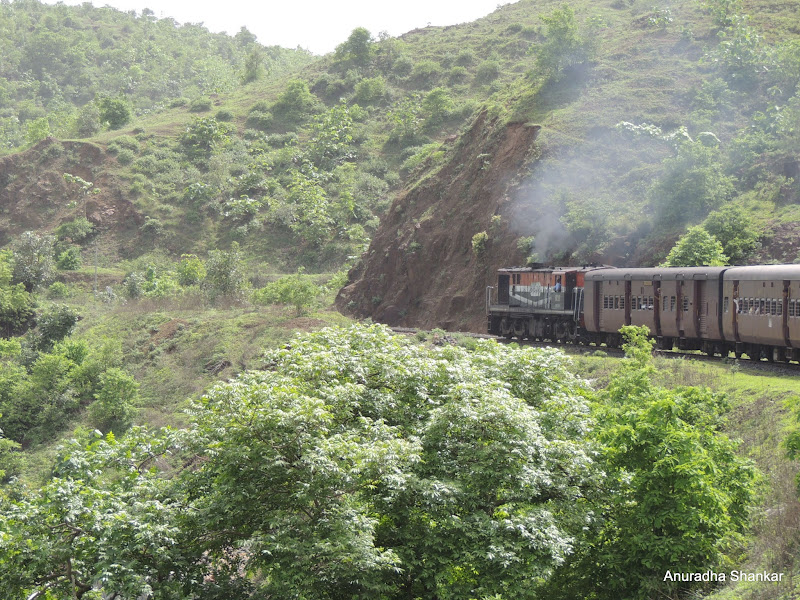 As before, the whistle announced the arrival of the train, and we rushed to get our tickets and our seats. This train was crowded too, and yet again, I managed a window seat, thanks to the camera. Our co-passengers this time were two women, mother and daughter, migrants from Rajasthan who worked in the iron trade. The daughter was all decked out in wedding finery, but she refused to allow me to photograph her; the only person so far who had! The mother instead, kept up a steady stream of questions, from why I was clicking photos to where I was from, where I was going, and so on and so forth. With all the conversation, the journey back seemed so much shorter…. In no time at all, we were back at Mhow, heading to our next destination.

My driver was now beaming. “I had no idea the train was so much fun. Or that these places were so beautiful” he said, and added “I shall bring my wife here. Sir said the train may stop soon. I hope it doesn’t, so I can bring my daughter when she grows a little older.” I could do little but echo his words. I too wanted to bring my son here, and open his eyes to the wealth of our natural as well as railway heritage. I just wish we all, and these trains, had some more time!

This post originally appeared in the July 2015 issue of Rail Bandhu, the official magazine of Indian Railways, titled, Chasing Waterfalls. 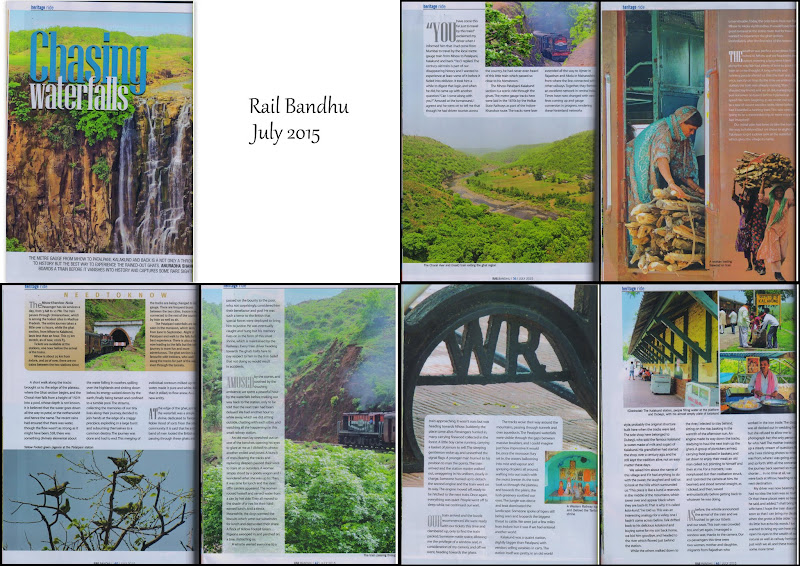 Special thanks to Dev Kumar Vasudevan of Mhow, without whom this trip would never have been possible! I have known Dev for years through our blogs on Sulekha, but we had never met. When I messaged him out of the blue, saying I wanted to write about Patalpani, and travel on the train, he responded with gusto, found all the relevant information for me, and even accompanied me on the trip! Thank you so much, Dev! I just hope I can bring Samhith to traverse this route before the trains chug their final way down the ghats.