Suchindram - Of Indra's purification, and other stories

November 24, 2015
Moving on from Kanyakumari, let me take you to one of the most beautiful temples we visited on our Southern Jaunt - Suchindram. This is a special post for me, since its about what I love the most - a temple and its stories. However, even more importantly, this is the 1000th post on the blog! Besides, I have now been blogging for over 8 years, and it has so far been a fantastic journey, with too many highlights to mention here. As I pen this thousandth post, I would like to thank all of you, my readers, for it is you who have made this journey memorable. Meanwhile, I hope and pray for many more journeys, and stories to share with all of you.....

Suchindram. What can I say about this amazing temple, that hasn’t already been said before? The legends are many, and oft repeated, and as for the architecture, better and more knowledgeable people have written pages on it. I spent a little more than an hour there, and while inside, simply stared around me in wonder, awed by the impressive work, spellbound by the intricacy on display. And no, I did not click any photographs either.

So, once again, what do I write?

Let me begin with the stories, for the stories are what interest me the most.

One of the oldest stories of the temple is where the town gets its name from. It is said that this is where Indra worshipped Shiva, and was released from Gautama’s curse. Suchi means purification, and thenceforth, the town came to be known as Suchindram – the site of Indra’s purification.

Another story is closely aligned to the legend of Kanyakumari. He is the Lord who falls in love with the virgin goddess, and the truant groom who turns back on the way to the wedding, because the cock has crowed. The cock of course is Narada, doing the Gods a favour by stopping the union of the Lord and his beloved, for the virgin goddess is the only one who can slay the demon Banasura!

There are stories galore, but let me tell you one more – sometimes considered the most important one, related to the lord who resides here. He is called ‘Sthanumalayan’, a form of the trinity – Shiva (Sthanu), Vishnu (Mal) and Brahma (Ayan) (See first pic). The story goes back to the time of the sage Atri and his wife, Anasuya, who was considered the epitome of chastity. The gods decided to test her and arrived at her doorstep, begging for alms, when the sage was out. When she offered them food, they refused, saying they would only accept alms from someone who wore no clothes. Anasuya thought for a moment, and then, bringing water from her morning’s puja, sprinkled it on the three visitors, turning them into babies. She then proceeded to feed them. The sage arrived to find his wife with three children, divined the reason, smiled, and went on with his prayers. Meanwhile, the goddesses were worried at the prolonged absence of their husbands, and eventually arrived at Atri’s ashram, where they recognized in the three children, their husbands. They accepted the greatness of Anasuya and begged her to restore their husbands, which she did. However, the gods stayed back here, at the foot of a tree, as three lingams, a constant reminder of their descent on earth, and the greatness of Anasuya.

The lingam in the main sanctum is considered to be a form of all the three gods, and thus his name. Besides, the temple also houses the original lingams at the base of the tree, and shrines to Lord Vishnu, and a wide variety of deities.

One of the most popular deities in the temple is Anjaneya, or Hanuman, whose 18 feet tall monolithic statue is one of the prime attractions here. The statue is an ancient one, which is believed to depict Hanuman in the manner he showed himself to Sita in the Ashoka Vana at Lanka. It is said that this idol was buried during Tipu’s attack of this region in 1740, and subsequently forgotten. The statue was re-discovered only in 1930, and installed here.

Incidentally, the main offering to Anjaneya here are white butter and betel leaves. These offerings are so huge in quantity, that the statue is almost always covered with white butter. It is hard indeed to see that it is made of granite!

So much for the stories. As to the architecture, I can only reiterate that there is so much to see here and appreciate, that a short visit like mine is barely enough to scratch the surface.

The most impressive and unique feature of the temple, according to me of course, is the interesting depiction of the Navagrahas, which are depicted, not on a platform, as is usual, but on the ceiling! Lamps are lit on the base as an offering to them.

The musical pillars are another huge attraction here, but sadly, they have been so misused, that they are now covered with iron grills. This is true not just for these musical pillars, but also for the many, many monolithic compound pillars (multiple pillars carved out of a single one, from a single stone) in the temple. Some of the more beautiful depictions of the Gods as well as Dwarapalakas have also been covered with grills to prevent people touching them.

The temple is a massive one, with rows and rows of pillars, each one more beautiful than the other, and shrines to almost every deity you can think of. There are also stories associated with many of the minor deities, but there is no way I can do justice to any of them, so I will not even try to. This is one of those temples you must visit and experience the divinity and the beauty for yourself.

The only part of the temple I have photos of, are the gopuram, which is said to be among the tallest in South India. It is visible from across the town, and so covered with detailed figures, that it is difficult to identify every one of them. Here is a glimpse, to give you an idea. 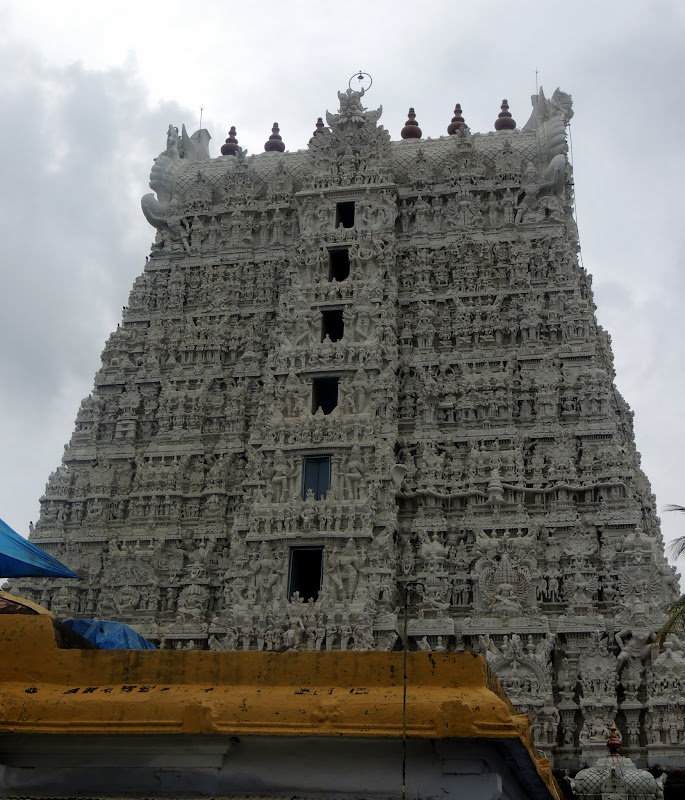 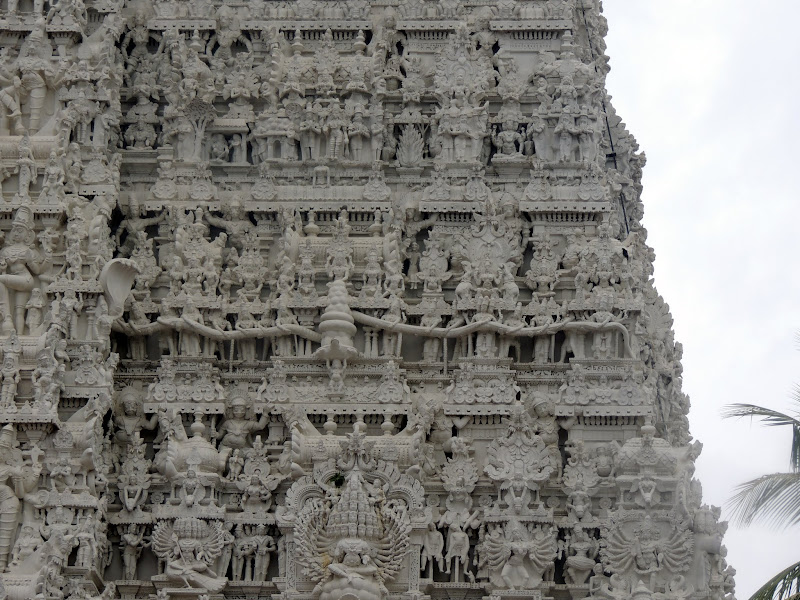 Finally, before I end this post, I should clarify that this post isn’t meant to be a complete resource of information about the temple. It is just my impression, from the short time I spent there. For more information and any queries about the temple, please head over to the temple website. It is quite detailed and even has contact numbers.