November 26, 2015
It was cloudy when we set out from Kanyakumari for Nagercoil, but in the short time it took us to reach, the rain gods decided to come down with a vengeance! It was pouring cats and dogs at Nagercoil, and the roads were flooded. We were all set to give up, but our auto driver was a resourceful man. “There are many roads to the temple” he said, and though we knew he meant it literally, we wondered at the philosophical phrasing. 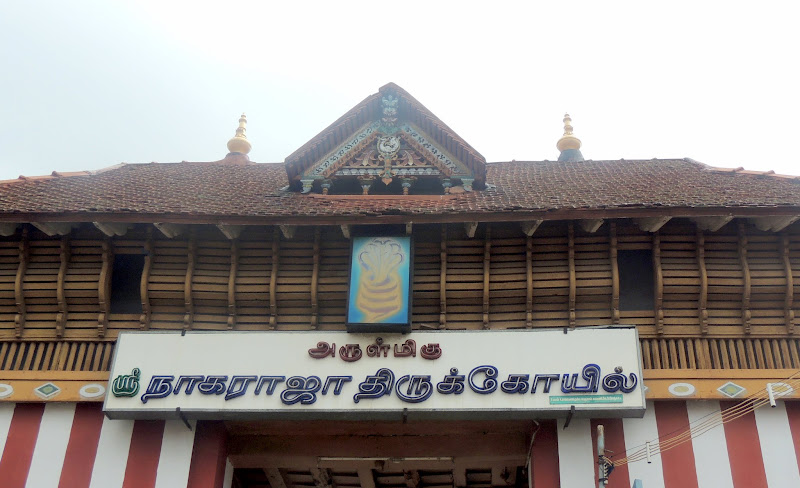 He wove his way in and out of traffic, sometimes through what appeared to be knee deep water, and came to a screeching halt outside a simple looking archway. Thanking him, we stepped out, opening our umbrellas. By now, we weren’t even thinking of the temple we were going to see. The only thing on our mind was “It is supposed to be summer. It is supposed to be hot. And it feels like Mumbai in the monsoons!” We stepped into the temple complex, holding on to the umbrellas, and stopped short. 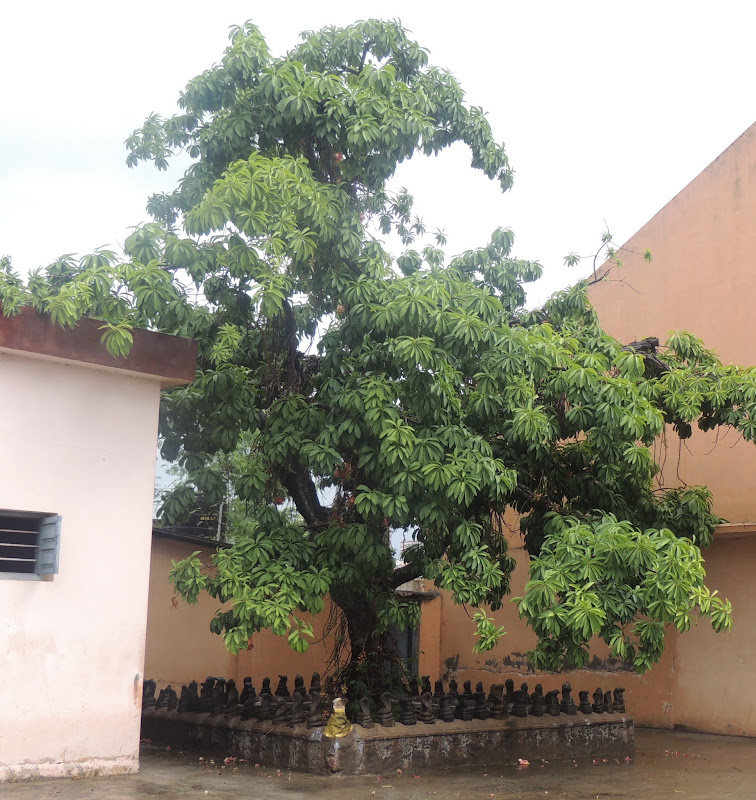 Trees with idols of snakes at their base are a common sight in the south. Yet, the sheer number here was unexpected. “I should have remembered. This is after all, a temple to the Lord of the snakes.” I thought, but I continued to be fascinated by the variety of snakes carved into the stones.

The most common motif was Krishna, not surprising, considering his triumph over Kalia. 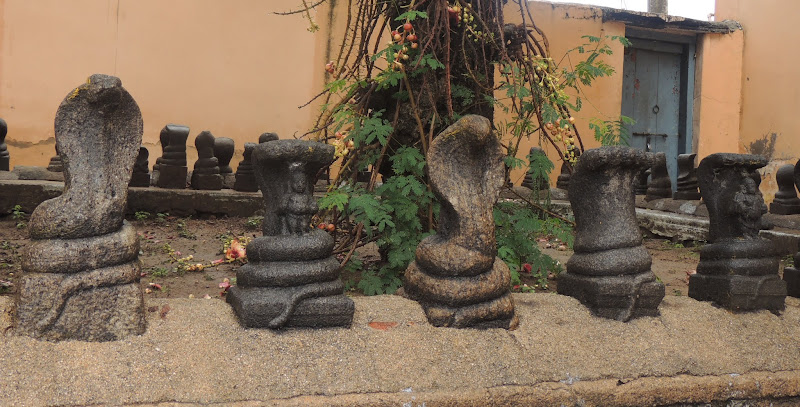 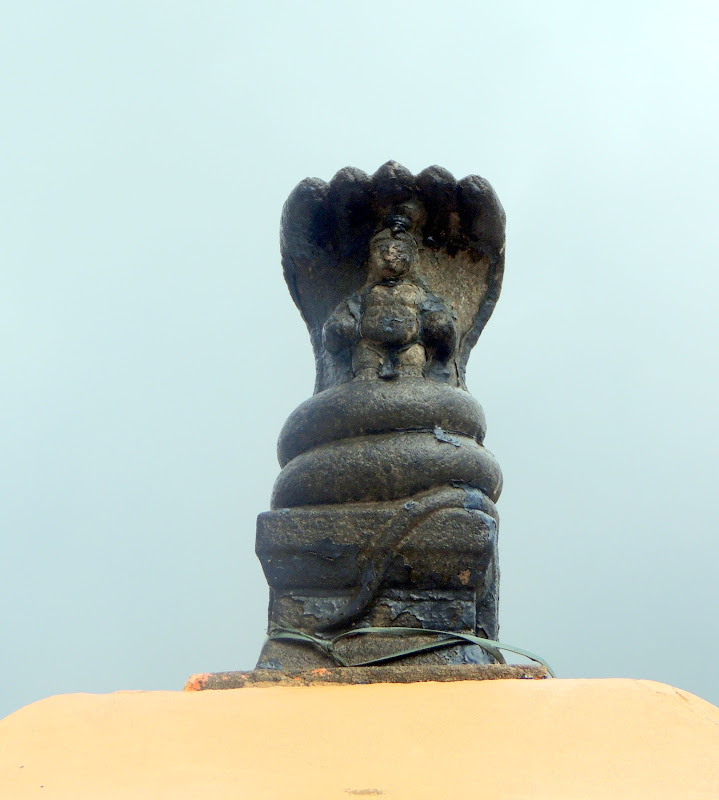 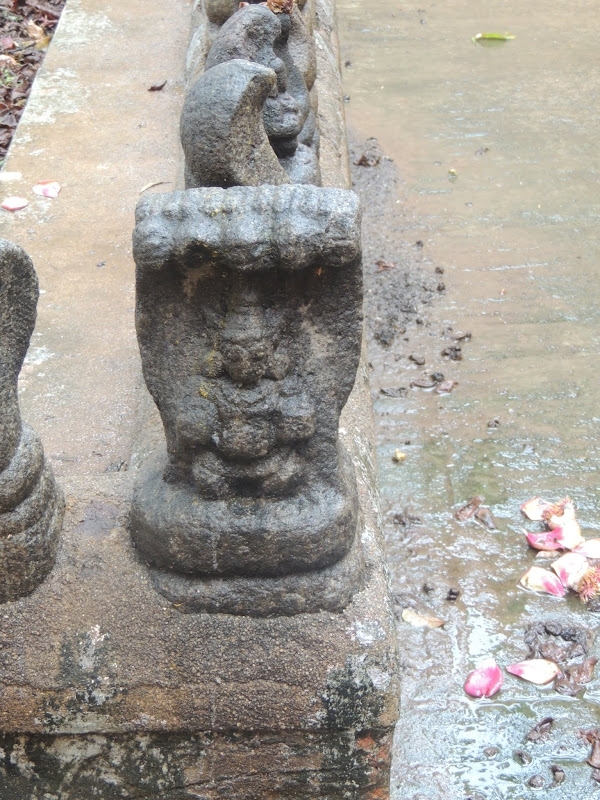 Here and there, were motifs of lingas. Shiva, after all, wears snakes as his ornaments! 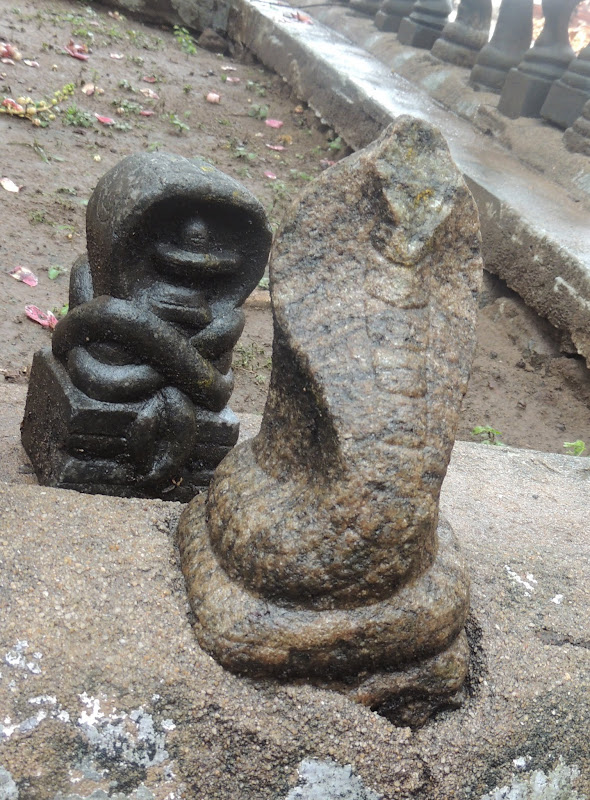 Naga Linga flowers drooped from the tree, over the snake figures, as if eager to offer themselves. Interestingly, the Cannonball tree is a familiar sight in many Shiva temples, though the tree itself is native to Central and South America! 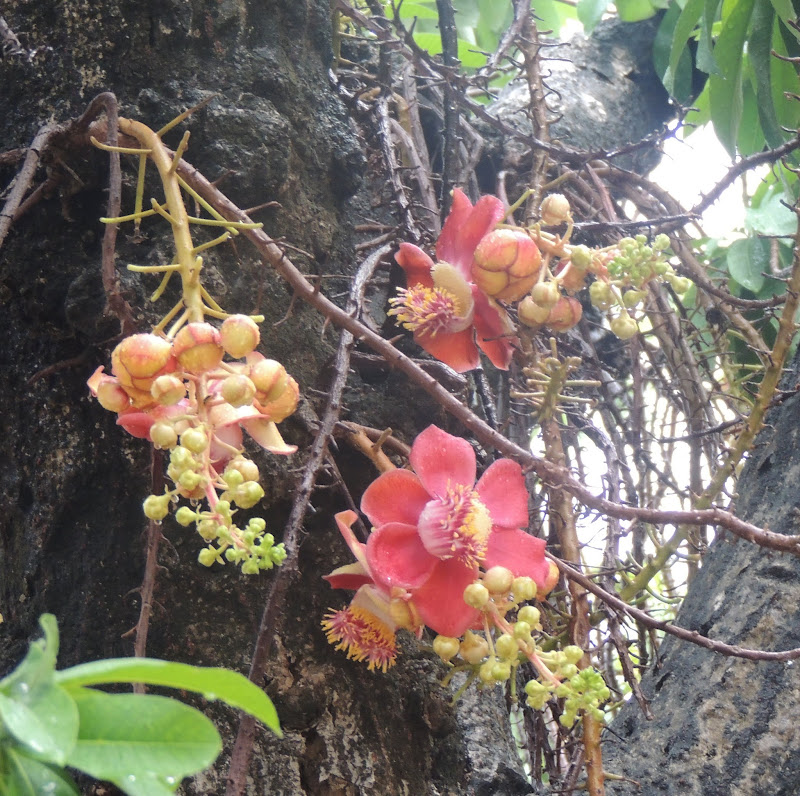 Pulling ourselves away from these Naga figures, we headed towards the main shrine. 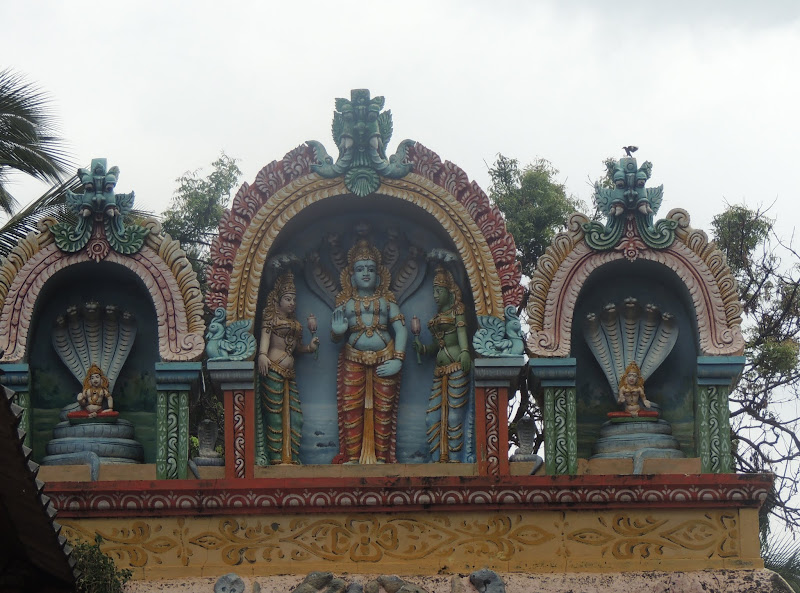 The sanctum houses what is believed to be a swayambhu idol of Nagaraja – the king of the snakes, in his 5 hooded form. 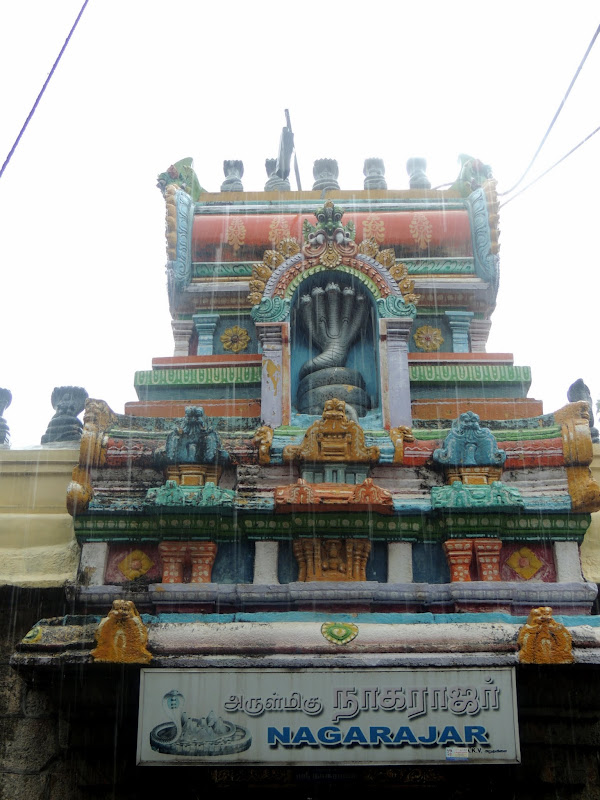 Outside, are two huge Nagas, the guardians of the shrine. 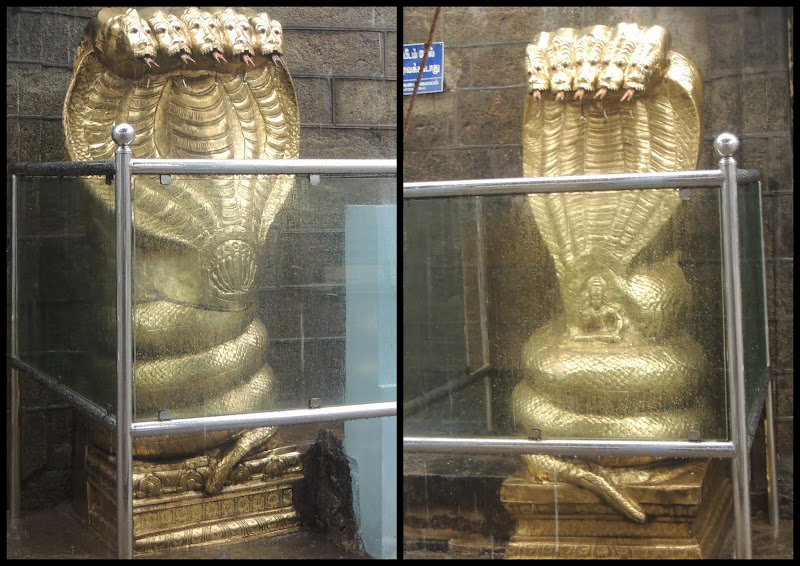 The temple is a simple one, and the main sanctum is still said to have a sand floor, and thatched roof, since it is believed that snakes still visit the shrine. It was, however, raining so heavily by now, that we thought it prudent to leave before the entire town flooded and we got stranded here.

The temple was fascinating on many levels.

I have seen plenty of snake figures outside temples, offerings of devotees, usually wishing for a child. However, this was the first temple to Nagaraja I have visited, and this is the only one in Tamilnadu. Besides, the sheer variety of Naga figures was stupendous.

The temple itself, on the other hand, is simple, built in the Kerala style of architecture. This isn’t surprising, since the town is closer to Kerala, but the style is a sharp contrast to the elaborate architecture of the temples in Tamilnadu.

It is interesting to think of the origin of this temple. This area, even today, despite rapid urbanization, is mountainous and thickly forested. Heavy, unseasonal rains showed us the lush greenery all around. Snakes must be a common feature in this landscape. The shedding of their skins associates them with immortality, and they are also associated with fertility. However, to cross them, in the days before anti-venom, meant certain death. No wonder they are so feared, and also worshipped.

However, most interesting is how this tradition has stayed strong despite the passage of centuries – from ancient times, when this must have been a forest shrine, through various periods of rule by kings with varied religious beliefs, through British occupation, to the present day.

As we turned back towards Kanyakumari, I thought about our driver’s words “There are many roads to the temple”. Yes, there indeed are many roads, of faith. And this temple embodies just one of them.  It is up to us to find one that suits us. The ultimate destination, however, is the same!