The Southern Jaunt : At our land's end - Kanyakumari

November 16, 2015
I was, but a child when my mom first told me the story of the bride who waited for her groom to arrive, and when the sun rose, but there was no sign of him, she turned the food prepared into sand, herself to stone, and stood forever, looking out into the sea. As I grew older, I heard different versions of this story – of the demon only she, an unmarried girl could kill, and of her nose ring, which shone so brightly, that ships, mistaking it for a lighthouse, steered this way, and were dashed against the rocks – but it remained just as poignant as ever. The stories fired my imagination, and my mom’s descriptions fascinated me. “How fantastic it would be, to see sands of different colours, or to see the merging of two great seas!” I thought, and waited eagerly for the day I would travel to Kanyakumari!

My mom had visited Kanyakumari as a child, and her stories of the temple were interspersed with her descriptions of the town. It was then, in the early 1950s, just a little more than a village, pristine and unspoilt, with vast stretches of beaches and the temple standing near the confluence, the goddess looking out at the horizon! It was all terribly fascinating, but Kanyakumari eluded me. We tried to visit multiple times, but something always went wrong. A couple of years ago, when we visited Srinagar, the regret only increased. I had visited Kashmir, but not Kanyakumari, though I hailed from Tamilnadu!

This May, I finally set foot at Kanyakumari, accompanied by my mom and mother-in-law! And where was Samhith? With his aunt at Tiruppur, enjoying himself and least interested in the Temple Run we were about to begin!

Our train dropped us at Nagercoil junction amidst heavy, unseasonal rain, and we were welcomed on our arrival at the TTDC Kanyakumari resort by peacocks! Elated by the sight, we set forth to see the town, the temple, and the beach. 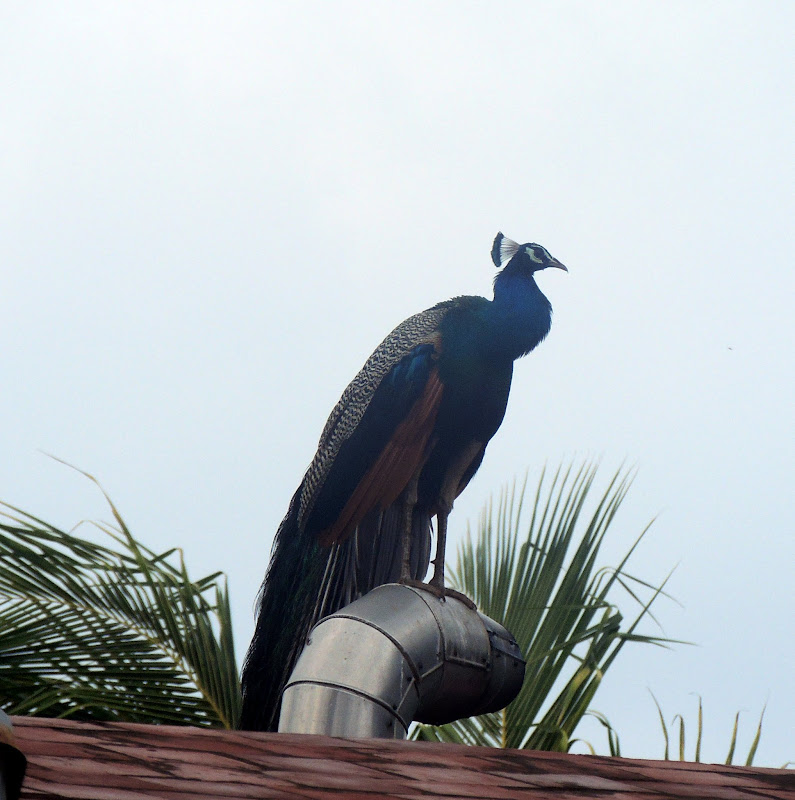 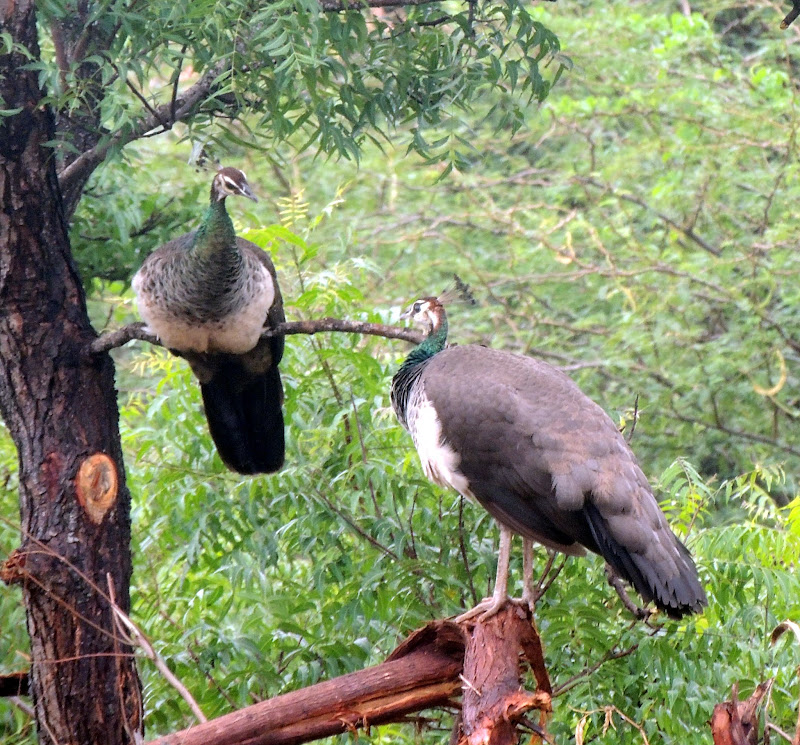 The first thing that struck me at Kanyakumari was – Where were the beaches? Every inch of sand seemed to have been taken over. Either there were grand promenades, well paved walkways, or, where there was some sand, we could only see stalls. 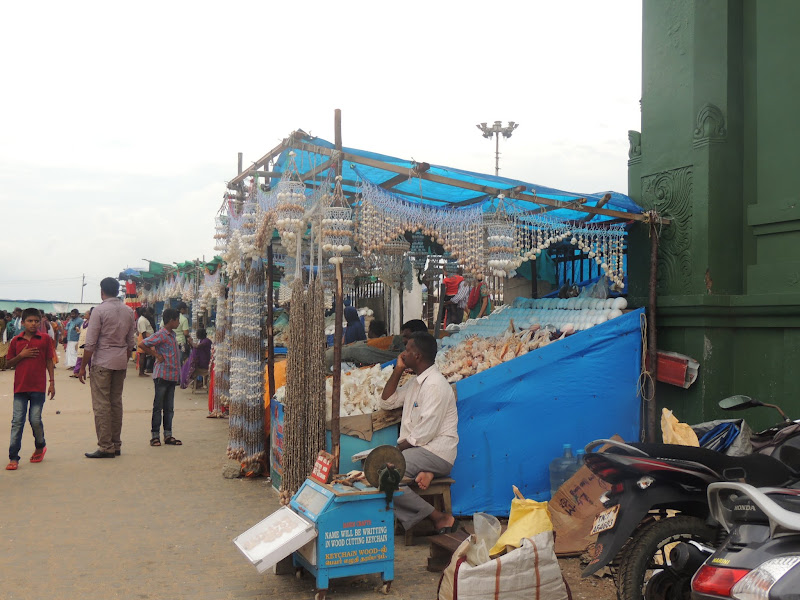 Choosing to visit the Vivekananda Rock Memorial (which wasn’t there when my mom visited), we headed to the boat jetty. If I had known that we would have to stand for over 2 hours in the queue (and that, apparently wasn’t too long, since it was a weekday!) I would never have even looked towards it!

The Vivekananda Rock Memorial was filled with tourists. How I wished I could imagine those days when Vivekananda swam across the turbulent sea and meditated on this very rock! The turbulent sea was still there, and, standing on one edge, looking out at the horizon, there was a sense of spiritual peace. Which was shattered the moment someone rushed with a phone camera to take a ‘selfie’!

We were content to see the Tiruvallur statue from afar, and rushed back to the mainland, and made our way to the temple.

The long queue here wasn’t surprising, and the deity herself was much like I had imagined her, from the many photos I have seen, over the years. Her nose ring gleamed, a constant reminder of the legends, and I wondered if it could still be seen from the sea, considering the massive crowds these days! Of course, the temple authorities are taking no chances, and the eastern door is always kept closed.

Walking down the beaches, or what remained of them, I agonized over the fact that I couldn’t see the different colored sands any more. I hadn’t even been able to see the colour shift in the merging of the seas, since it was, by now, raining, and the skies had darkened. “There goes my sunset” I thought, gloomily. 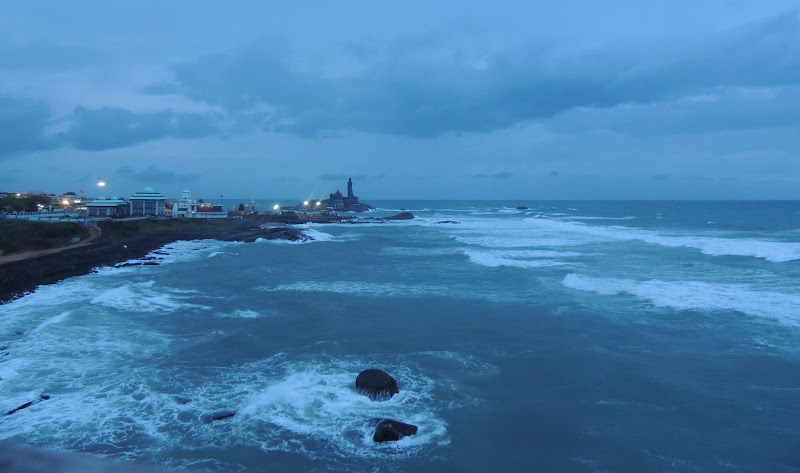 We awoke early the next morning, keeping our fingers crossed, and walked to the tower constructed by the TTDC behind the resort. It was meant for viewing the sunrise and sunset, and I hoped that, having missed the sunset, the gods would have some pity and show us a beautiful sunrise. The looming clouds were a clear indication that it was not to be, and the only drama in the sky was the sun rising behind the clouds, a glimpse of red and orange escaping from confinement now and then! 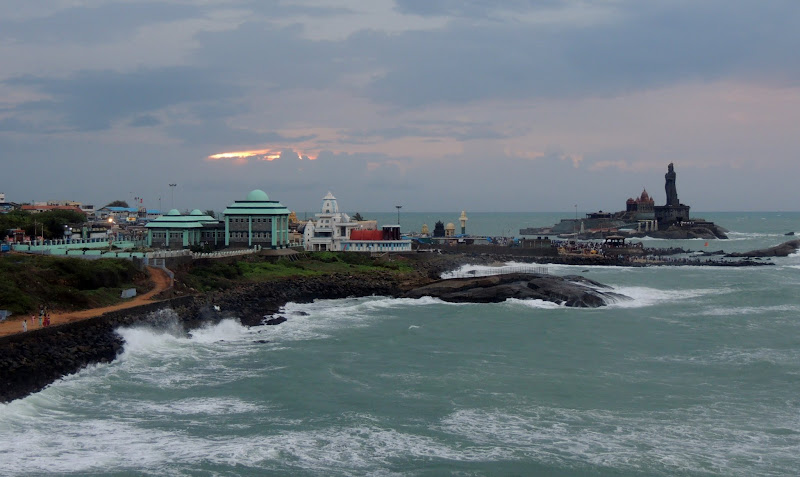 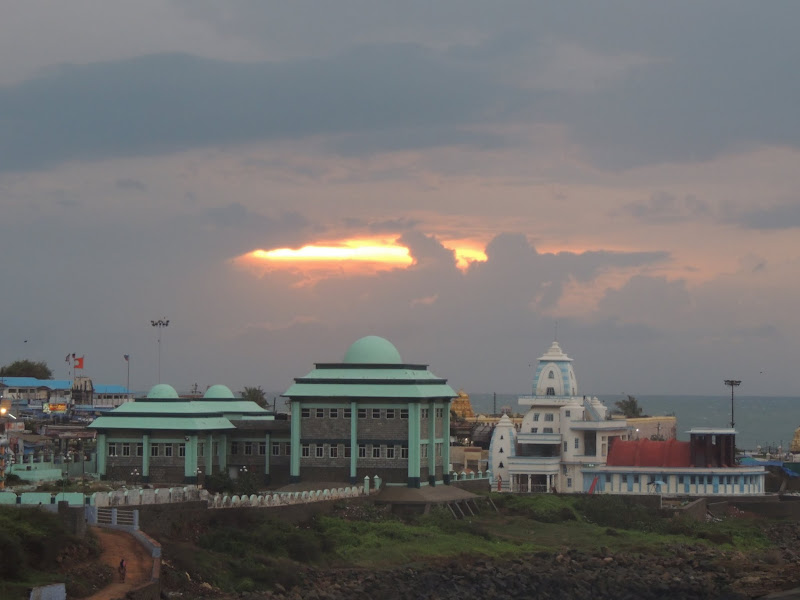 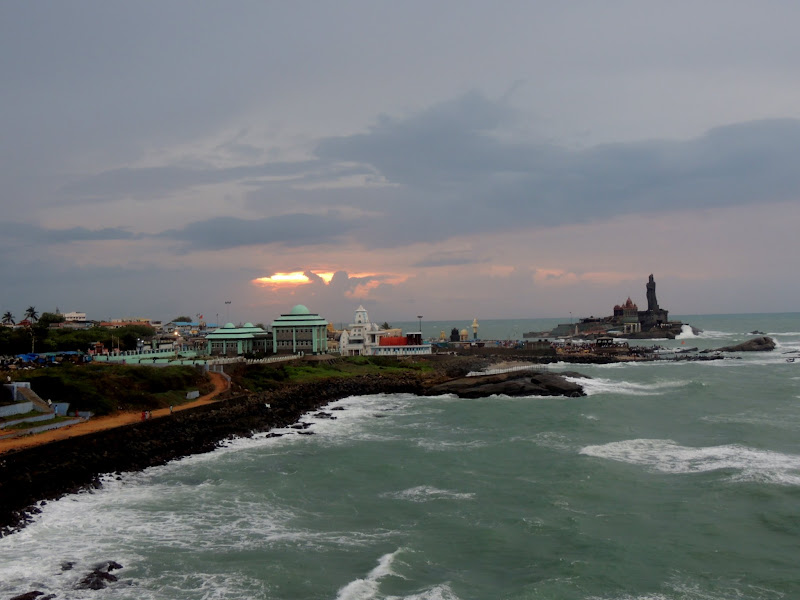 Here again, the tower was so filled with people, that had there been a proper sunrise, it would have been difficult to capture it from over the many heads taller than mine!

Kanyakumari was a disappointment, but mostly because of my imagination, and the great expectations I had. I did know that things wouldn’t be the same, but reality was far worse than I could have imagined. For my mom, it was nothing like her earlier visit – everything seemed different. In retrospect, it was a lesson – to go without expectations, and enjoy things as they are.

However, as always, there is a silver lining. I can, at last, say with assurance - “I have travelled from Kashmir to Kanyakumari!”