December 16, 2015
When you have a long, long list of temples, and are short of time, it is inevitable that you miss some of them. And so it was, on our Temple Run. We chose to stick to the Nava Tirupatis, the Nava Kailasams, and a few other temples we certainly wanted to visit, and skipped the rest. However, there are times when the Lord wants you to come and see Him, and it is at such times that you feel truly blessed. We felt this at many temples, where we made it just as the temple was closing, but it was most apparent at Karungulam! 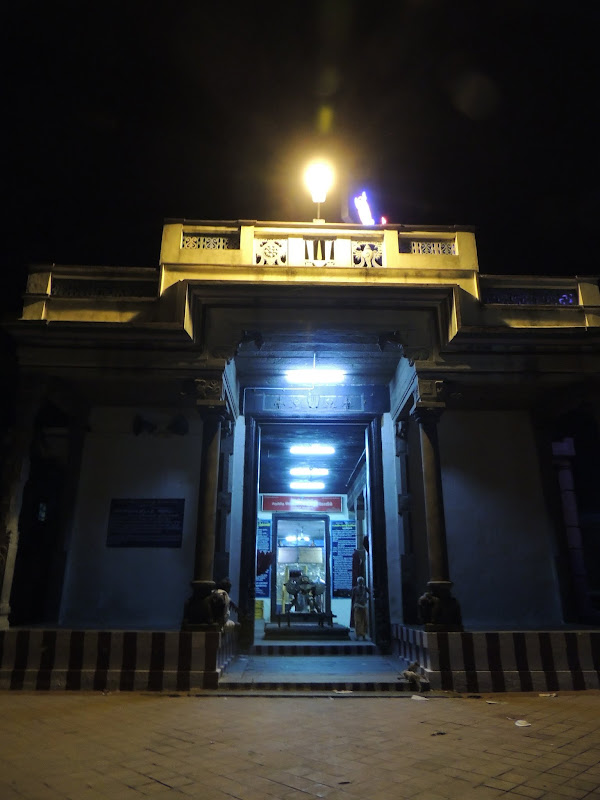 We had passed Karungulam earlier in the day, and my eyes had lingered longingly on the spire visible atop the hillock, wishing I could visit. I had read of the temple, and was fascinated by the idea of two sandal wood planks being worshipped as the deity. However, time was of essence, and we had many temples to visit. And so we moved on. Later that evening, as we made our way back to Tirunelveli, tired after a hectic day, drained out by the last, final rush to the Murappanadu temple, the spire beckoned once again. We looked at our watches. There was still some time for the temple to close. “Let’s go!” was the unanimous thought, and we asked the driver to take the turning to the temple.

The twin temples of Venkatachalapathy and Srinivasa at Karungulam are located atop the Vagulagiri hill. The hill, it is believed, was once covered with Vagula flowers (probably Bakul) and thus came to be known as Vagulagiri. According to the temple legends, this is an extremely ancient site, and a temple to Lord Venkatachalapathy has existed here since times unknown.

The story of the Srinivasa temple begins with a king, from the northern parts of the country, who falls sick. None of his physicians or experts are able to cure him, and he finally goes to Tirupati, and prays to the Lord, as he is the only one who can cure him. The Lord obliges, and appears to the king in a dream. He directs him towards a grove of sandalwood trees, and asks him to build a chariot with the logs, for Him. When the chariot would be completed, there would only be two logs left, and in them, the Lord himself would dwell. He further asks the king to take the two logs further south, to a village called Krishna Thadakam, or Karungulam (Krishna means dark, and Karu means black; thadagam and kulam are both lake. The village name thus translates to ‘dark coloured lake’), and install them at a suitable place there. The king follows the Lord’s instructions to the letter, and builds a chariot, finding at last, two logs left. He carries the logs south, and arrives at Vagulagiri, where he finds an old shrine dedicated to Lord Venkatachalapathy, accompanied by Bhudevi and Sridevi. Convinced that this is the right place, he installs the two logs near a tamarind tree, and finds himself finally rid of his disease. Incidentally, the tamarind tree here is called ‘urungapuli’, the sleepless tamarind, since its leaves do not close at dusk!

The two logs stand in the sanctum, worshipped as Srinivasa. It is most interesting to see how the priests decorate the two logs to resemble the Lord, and how, when fully decorated, and covered with flowers, it is difficult to realize that there isn’t an idol underneath, but just two plain logs! The feeling of awe and amazement contributes in a great degree to the atmosphere and the spiritual feeling in this temple, and as I stood there, in the sanctum, with no one to distract me, I found myself spellbound. At that moment, it truly felt like He had drawn us there!

Karungulam has another temple too, at the base of the hill. This one is dedicated to Lord Shiva, as Marthandeswarar. The water in the temple tank is blackish in colour, which is probably why the town is called Karungulam. The village is also called Marthandam Karungulam, after the Lord, to distinguish this one from others in Tamilnadu.

This one is an ancient temple too, and was just about to close when we visited. The most interesting thing about the temple are the Navagrahas, the nine planets, which appear here with their wives!

It seemed somehow appropriate that, after a day spent visiting Nava Tirupatis and Nava Kailasams, we would wind up the tour with a Shiva and Vishnu temple in the same village, and one where the Navagrahas stand with their wives!

These two days had been hectic, and the temple run had tired us. We had visited 31 temples, the most important ones on our list, near Tirunelveli. We could have stayed on a day longer, and visited a few more, but having left Samhith behind, we were eager to return. Therefore, we decided to head over to Sankarankovil, stay there and visit a few temples nearby before heading back home.

For those interested, we hired a car at Tirunelveli, through a family member. You can contact Mr. Shanmughavel on +91 9585966999 to get in touch and hire a vehicle. The drivers as well as the car he sent us were excellent, and we were able to visit so many temples in the limited time, thanks to their efforts.