December 11, 2015
Subramanya, Karthikeya, Muruga. He has many names, and in southern India, especially Tamilnadu, he is the consummate hero. He is the divine child, born to subdue the demon, Surapadman, who has enslaved even the Gods. He is born of the sparks from Shiva’s third eye, and he is carried by Agni, cradled by Ganga, suckled by celestial nymphs, and finally raised to be a warrior by Parvati. He is but a young man when he leads his army to victory against the demon. However, he doesn’t just kill the demon, he vanquishes him, and, accepts his surrender. The peacock, his vahana, and the rooster, his emblem are the forms last taken by the demon as he is vanquished. There are stories galore of Muruga – of his fight with Ganesha, and leaving home, to take up residence at Palani, of his marriage to Indra’s daughter, Devayanai, and his wooing of the tribal maiden, Valli. Tamilnadu has so many temples dedicated to Muruga, that it is impossible to enumerate them! Six of them, however, are special. These are where his army camped, and where some memorable events in his life occurred. Together, they are called ‘Arupadai Veedu’ in Tamil. 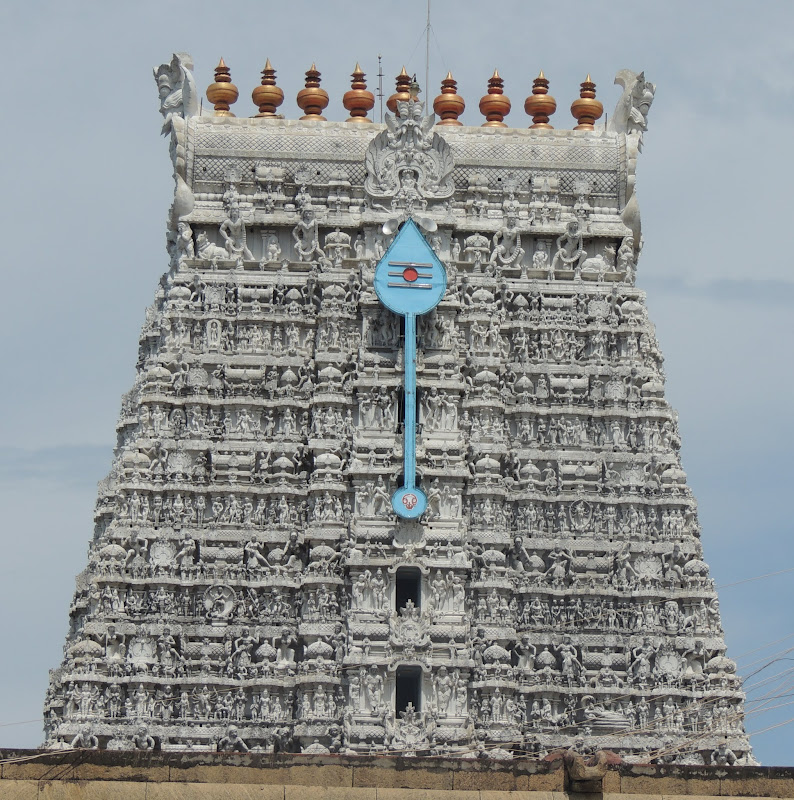 One of the most interesting, and beautiful, among these six shrines, is the one at Tiruchendur, where the temple stands, facing the sea. It was from here that Subramanya set out to fight the demon, and it was here that he returned, victorious, and offered prayers to his father.


It is believed that the original shrine here was a rock cut temple, which was later built over with granite. Supporting this belief is the main shrine itself, where Muruga is seen in a standing posture, and on the wall is carved a Shiva Lingam. Further, just behind the shrine is a small, cave like structure, which houses 5 lingams, called the Panchalingam. It is believed that these were originally the Lingams worshipped by Muruga, and that the Gods still arrive here to offer their prayers every day.

There are many stories related to the temple, which speak of its greatness. It is believed that the Dutch tried to demolish it, but were unsuccessful. They finally eloped with the main idol, but their ship sank, and the idol was lost. Eventually, the lord appeared in a dream to a devotee, and the idol was recovered and reinstalled in the temple. In more recent times, the 2004 Tsunami, while wreaking havoc in the surrounding areas, didn’t as much as touch the temple. It was reported that the temple and the town itself turned into a safe haven during this terrible period!

Coming back to our visit, we arrived at Tiruchendur at lunch time, since the temple is open from 5 AM to 9 PM. Hungry as we were, we decided we could wait till we had seen him, and headed straight to the temple. Little had we imagined the crowd! It took us a while to realize that we were looking at hours of waiting, which we didn’t have, and decided to see if we had any options. At the main entrance, waving aside the touts, who promised us quick darshan, we headed towards the counter, where the official seemed happy to see us. He advised us to take the Rs.250 tickets, since the temple was unduly crowded, being a holiday. Taking his advice, we bought the tickets and headed towards the shrine. Thankfully, our tickets did ensure a quick darshan, and within a matter of minutes, we were in the sanctum, feasting our eyes on the Lord. Despite the crowd, we were able to stand in front of him, admiring him, for quite some time, before we were asked to move on. Thanking our stars for buying the tickets, we headed to the Panchalingam shrine before coming out to circumambulate the shrine.

Our tickets had ensured us a quick darshan, however, as always, there was a catch! Due to the long queues, the inner prakaram (circumambulatory path) was closed, and we missed quite a few of the smaller shrines. And on our shorter way out, we missed some of the shrines in the outer prakaram too.

Our satisfying darshan more than made up for my disappointment at not being able to see the temple at leisure, having heard and read so much about it. Next, we headed towards the beach, but the burning sands made us change our minds, and we headed off for lunch, and then, back towards Tirunelveli, to continue our Temple Run!