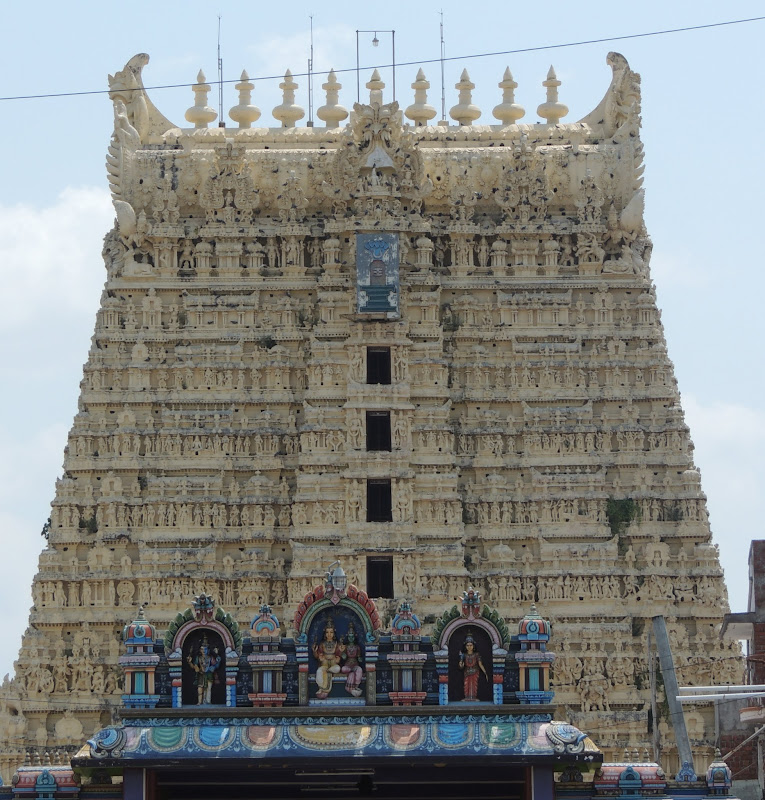 The local bus from Tirunelveli to Sankarankovil seemed at first empty. Then, the crowds began to appear. The bus was full when it left, but at every stop, there were more people getting in…. and no one getting off. And the most striking thing was – everyone was dressed to the nines! Except us of course!

Our perplexity must have shown itself, for one of our co-passengers explained “It is a very auspicious day, and there are lots of weddings happening at Sankarankovil today.” That statement set off alarm bells, which were clanging hard by the time we arrived at the temple. There wasn’t a room to be had, in the whole town, thanks to the wedding parties! Thankfully, we knew someone, and were all set to stretch out on their front porch if necessary, but they pulled some strings and managed to get us a tiny room just outside the temple. For that alone, I shall always be grateful to them! The room wasn’t great, but its proximity to the temple ensured that we spent most of our time at Sankarankovil, in the temple itself!

Sankarankovil was, in hindsight, the perfect place to round off our journey. Through our trip, we had visited temples dedicated to Shiva, Vishnu and Devi. And here we were, at our final halt, at a temple dedicated to Shankara-Narayana, and Gomathi Amman! 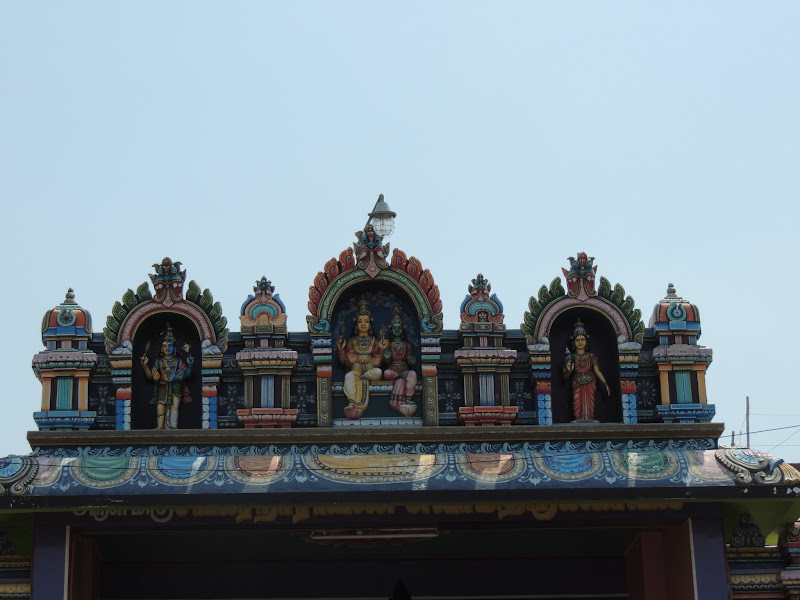 It is said that Shiva and Vishnu, tired by the constant disagreements between their devotees, appeared here in a composite form, with the right side of the body as Shiva, and on the left as Vishnu. He is thus called Shankaranarayanan. However, He also appears as a lingam, and is called Shankaralingaswamy, in the main sanctum. 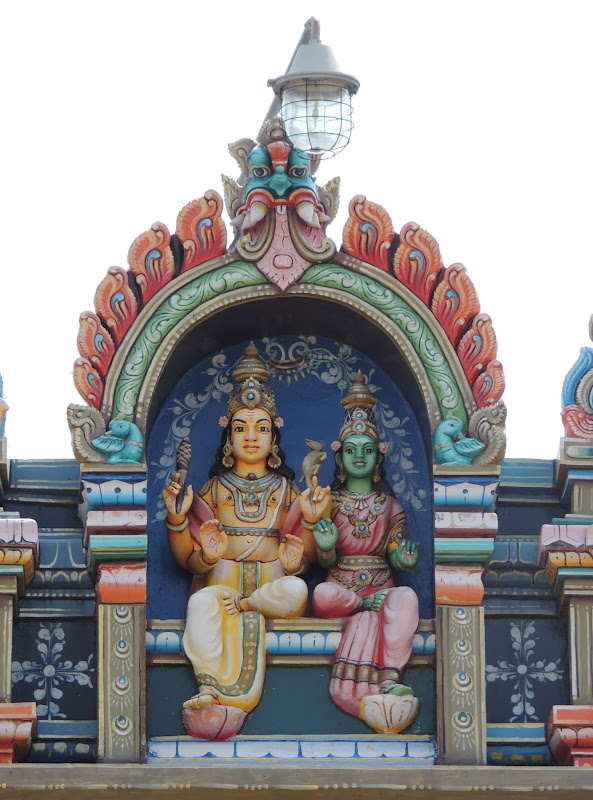 The stories of the temple are many and interesting. Most refer to a holy soul, named Manigreevan. He is said to be a divine being, cursed to be born on earth, by Parvati. He spends his life caring for a sacred grove of Punnai (Indian Laurel) trees. Once, while clearing an ant hill, he finds a tail-less cobra, and a lingam next to it. The Pandyan King happens to pass by, and Manigreevan shows him the lingam. The king is impressed at this divine occurrence, and builds a temple around the lingam.

Another story of the temple talks of two Naga kings – Sangan and Paduman. Sangan is a staunch devotee of Shiva, while Paduman is an equally staunch devotee of Vishnu. They argue the merits of their own deities, and eventually, unable to reach any agreement, go to Parvati, and ask her to resolve their argument. She finds herself equally confused, and undertakes penance to learn the truth. Eventually, both Shiva and Vishnu appear in front of her as Shankaranarayanan, thus underlining the fact that they are just one and the same. This event is celebrated in the temple even today, as Aadi Tapas (the penance of Parvati, in the Tamil month of Aadi). Further, according to this story, it is these serpents who reside in the ant hill, and one of these whose tail is cut off by Manigreevan. Also, it is believed that the temple tank was constructed by the two serpent kings. It is believed that bathing in the tank and eating the sand from the ant-hill (Puthu Mann) can cure all ailments.

The temple is a delight to those who appreciate iconography. The first sanctum in the temple is dedicated to Shiva, in his aniconic form, as a Lingam – Shankaralingaswamy. 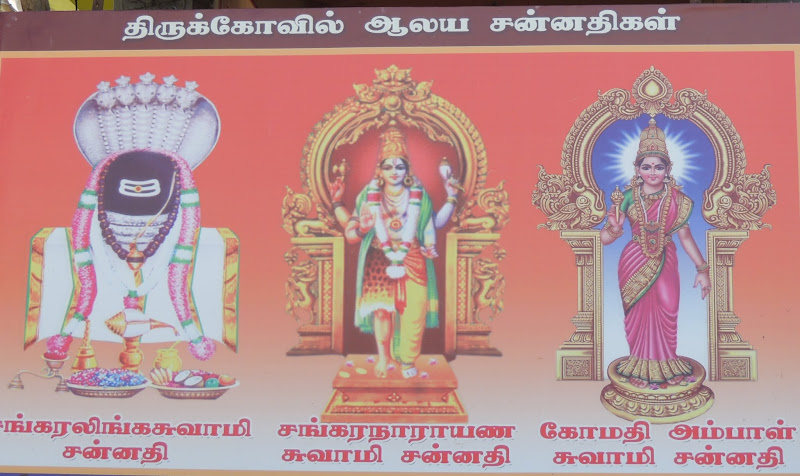 In the prakaram (circumambulatory path) around this shrine, He appears once again, as the ant hill – Vanmeekanathar. He is also shown here, seated on a serpent, with the hood rising over him as an umbrella.

In the next sanctum stands Shankaranarayanan. The right side of his body depicts Shiva, with Agni, Ganga, the crescent moon, wearing Rudraksha, and tiger skin, his tousled hair in a Jata. On the left side, he is depicted as Vishnu, with a gem studded crown, wearing a silk dhoti, and a Tulasi mala, holding a conch. The two serpents are shown by their side, holding umbrellas over the Lord. Very interestingly, their names, Sangan and Paduman, could be Tamil variations of Sanganidhi and Padmanidhi, who are usually associated with Kubera! 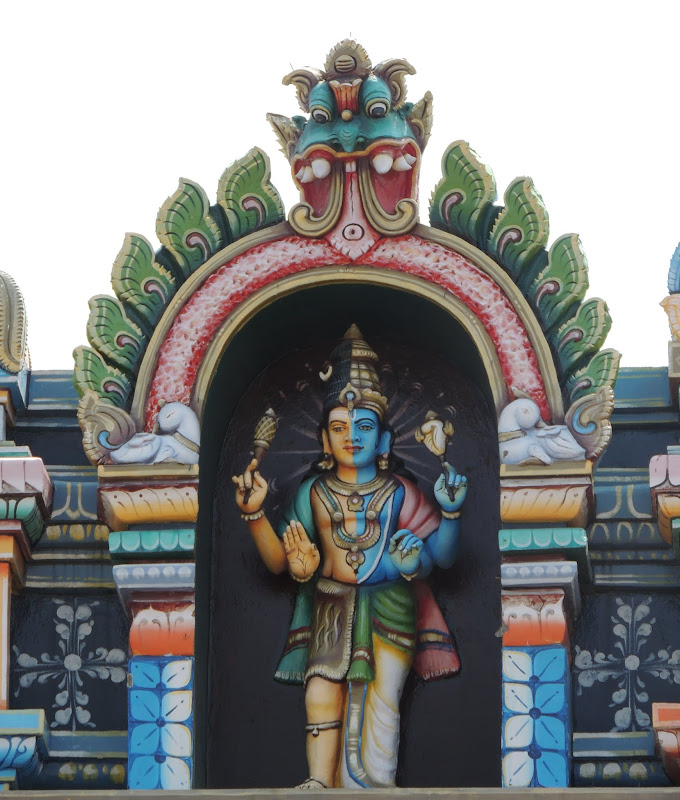 In the third sanctum is Parvati, as Gomathi Amman. It is believed that celestial beings arrived in the form of cows to help her during her penance, and thus she is Gomathi, the owner of cows (Go), with the face radiant as the moon (mathi). The Srichakram is installed in the mandapam of the goddess. It is believed that people suffering from depression or other mental ailments, can be cured if they sit on this. 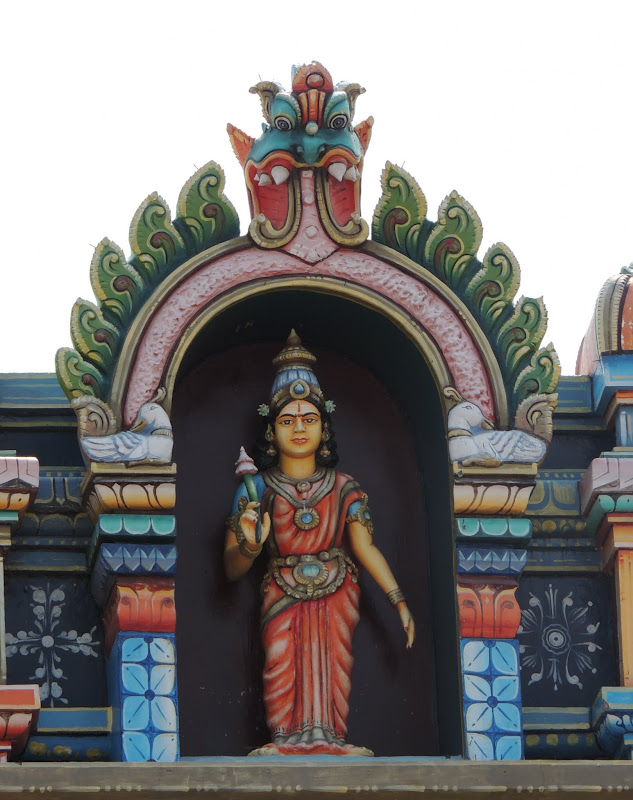 These are just the main idols. The temple is a huge one, and every circumambulatory path is filled with idols and sculptures depicting different deities, in varying forms. As is usual in this region, there are Saptamatrikas, Suradevar (Or Juradevar), and Adhikara Nandi, who is Nandi in human form, and in this temple, he stands with his wife Suyajadevi, at the entrance.

However, the most fascinating thing about the temple are its murals, in the shrine of Shankaranarayanan. The walls and ceilings are covered with them, and each one of them is detailed, intricate, and interesting. I returned here again and again, feasting my eyes on the murals, trying to stick to my intent not to click photos inside temples. Eventually however, there was one scene which was so fantastic that I just had to try. Taking permission from the priest, I clicked a pic with my mobile camera…. 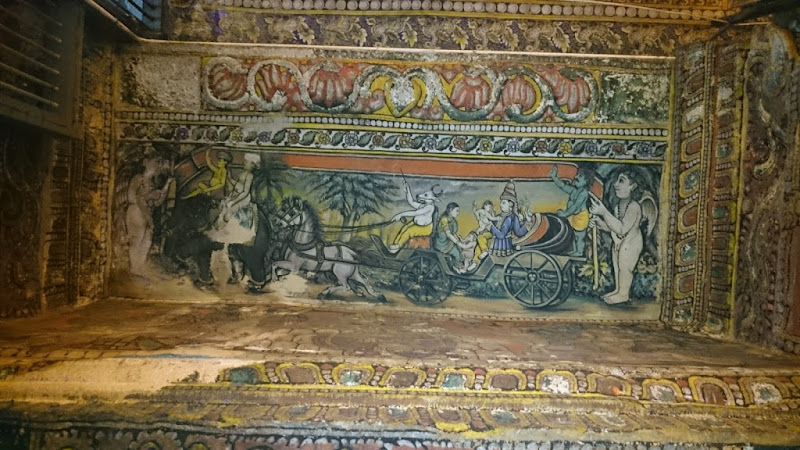 Why do you think I found this interesting? Because it depicts Shiva and his family, in a contemporary setting! See how they are seated in a horse-drawn coach, with Nandi as the driver? Shiva’s snakes are neatly wound around his head like a turban, and he wears a dhoti with something like a kurta! Parvati of course wears a saree, and they are shown playing with Ganesha and Karthikeya! Leading the coach is probably Veerabhadra, riding an elephant, and one of the Ganas stands like a footman! And on both sides are angels, male and female, wearing Rudraksha beads, probably depicting the saints who sang their glory. What a beautiful depiction this is, isn’t it? The style leads me to believe these would have been painted (or at least repainted) during colonial times. If you would like to see more such beautiful murals from this temple, head over to Bhushavali Natarajan’s site, where she has written an entire post on them!

We spent hours in the temple, walking around, enjoying its beauty. As we made our final pradakshina, and sat down for a while to rest, we thought we would do our namaskaram, and get back to our room. The Lord, however, had his own plans. As we got up to leave, someone hurried in, and began drawing a kolam. Curious, we stopped, and asked what was happening. “It is the final puja of the day. You should stay and watch” said a lady standing next to us… “If you have time, of course’ she added, as an afterthought. It was all we needed, and we sat down once again, to watch, as the temple stirred to life for the final event of the day, when the God would go to sleep. We followed the crowd as they moved from shrine to shrine, performing the final aarti. I had seen this only once before, at Madurai, over 20 years back, and it was a strange experience, to see how we consider Him divine, and yet, attribute to him every human value, even our needs, such as sleep! The final round took us once again all around the temple, and we watched as each shrine was closed for the day. Finally, we arrived back where we had begun, and were treated to the special prasadam – the milk offered to the Lord, before he was sent off to sleep.

It was the perfect end to our day too – a day of relaxation after our rushed Temple Run. It was, but a short break, for we had more temples to visit, on our final day in Tirunelveli. Sankarankovil, meanwhile, had given us so much more than we had expected. “This is how every temple visit must be”, I couldn’t help thinking. “If only there was enough time!” was the unspoken thought.