March 02, 2017
I stood at the foot of the steps, looking up at the mountain. The caves carved into it centuries ago were just visible, and, for the umpteenth time that morning, I reflected on the irony, that I had grown up almost right under the shadow of these mountains, yet it had taken me so many years to actually come here. My mother’s refrain “There’s a time for everything” constantly echoed in my head, as I followed the others up the flight of steps which would lead us to the Kanheri Caves. I was glad, at least, that though delayed, I was visiting the caves to attend a three day site seminar by Dr. Suraj Pandit, one of the foremost experts on Kanheri. 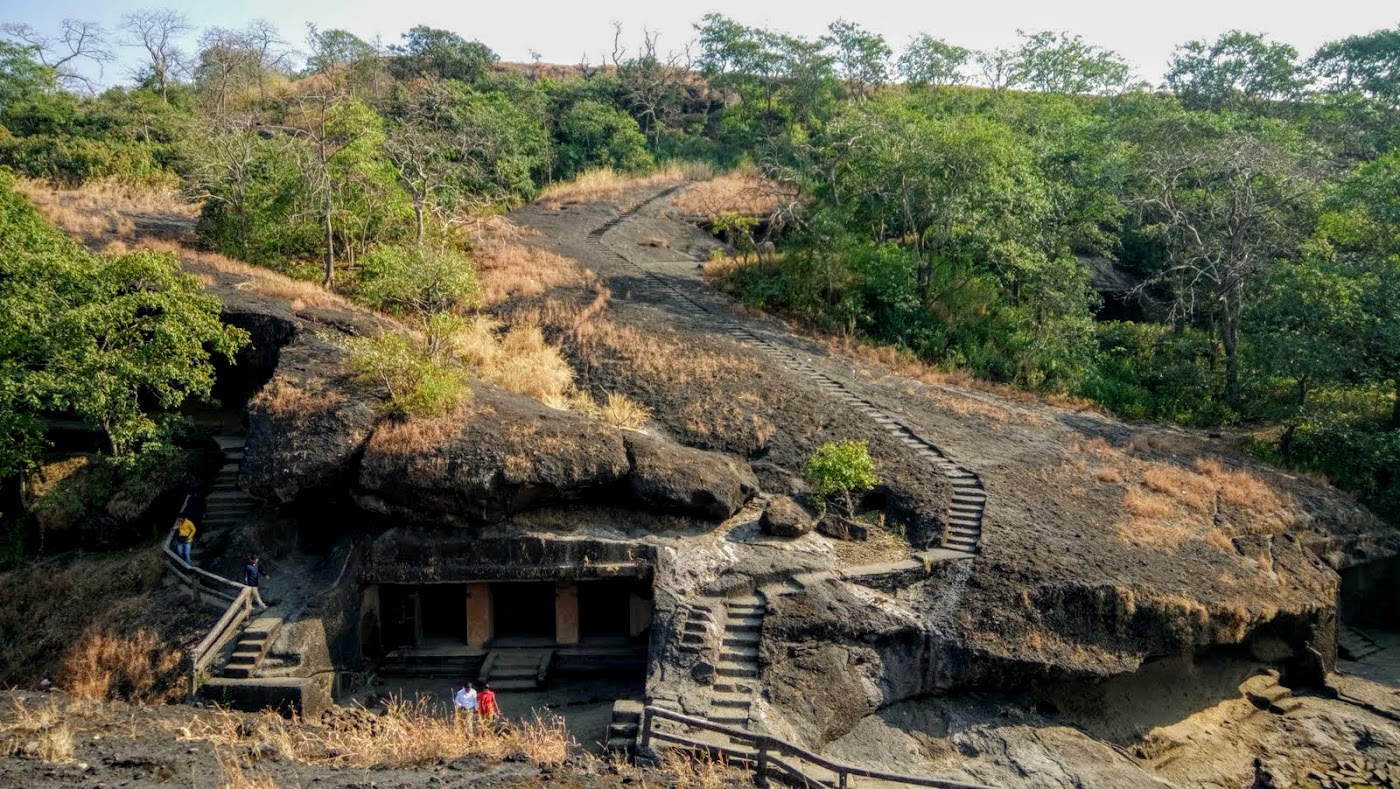 Kanheri, located within the Sanjay Gandhi National Park, was known as Krishnagiri or Kanhagiri, in inscriptions and ancient literature, the name coming from the black rock of the mountains. Spread over three hills, are over 100 caves, all of them Buddhist. The earliest caves date back to the 1st century B.C.E, and the settlement was active at least up to the 13th century C.E. The caves were thus inhabited for over a millennium, by Buddhist monks, who came here from far and wide!

Entering the complex, Dr. Pandit led us, not to the cave numbered one, nor to the cave which was the most impressive – cave 3. Instead, he led us into one end of cave number 2, and we all settled down on what appeared to be a bench-like structure, along the wall. We had three experts on these caves, with us. Along with Dr. Pandit, there was Dr. Anand Kanitkar, who has worked with UNESCO, and Mr. Vinayak Parab, who is the editor of Lokprabha and deeply interested in Buddhism in the region.

Over the next three days, the connection between trade and the spread of Buddhism would come up constantly. It was as we sat there, on that bench, that we first listened to Dr. Pandit speak of Kanheri as a significant site, on the Indo-Roman trade route. Sopara, or Surparaka, was an important port, which was well known to Roman traders. Even when Sopara declined, and Kalyan and Thana rose to prominence, trade continued, between these ports, Ter, which was an important market place in ancient times, Paithan, the capital of the Satavahanas, all the way to Bharuch, the other important port on the western coast. The route from Ter or Paithan, to Bharuch, would have passed by these hills, whose Basaltic lava traps are ideal for cave architecture.

Wandering monks, travelling along with traders on these routes, might have selected one of the natural caves to spend the monsoon months. At some point they would have realised how conducive the hills, the rock, and the location were, for settling down. As they carved out more and more caves, their techniques would have improved, and the architecture, and the grandeur of the caves, would have developed too. This would have brought more and more monks to these hills, and their numbers would have grown, to the extent that, in 1539, Don Joao de Castro, a Portuguese traveller, described Kanheri thus….
“There were palace-like buildings,
Images, houses, pillars, and water-cisterns,
It was a city carved in rock that could hold seven thousand people.”

Imagine then, the number of people who came by this way, not just the monks, but merchants, traders from foreign lands, pilgrims and locals. What a bustling site this would have been!

Traces of this grandeur, this importance still remain – in the shards of plaster still hanging on the walls, with traces of paint; in the post holes which are all that remain of the wooden doors and frames which were once an integral part of the structure; in the little details which  distinguish different depictions of the Buddha in the caves; and groups of caves set apart from the others, which hint at the various sects which made Kanheri their home; in the brick stupas, of which fragments remain, and the wooden ones, which we can imagine once stood in the niches. There is so much to see, that the three days I spent there left me overwhelmed, and in awe!

In cave number 2, on that first day, and often, during the three days of the seminar, I reflected on the pleasure of sitting there, in the caves, listening to their stories, feeling the place come alive. I wondered if monks and visitors had sat at the same place once, talking of the ports, perhaps the journey? Did they too talk of the philosophy of Buddhism? Did they discuss the caves and the art we were here to admire? It was certainly fitting to talk of these and more, in the very spaces where such discussions had gone on before!

Kanheri is a bustling site even today, with hordes of visitors turning up every weekend, exploring every inch of the caves, clambering over the structures, or cosying up in a nook, trying to escape prying eyes. The caves are in a sad state, with crumbling pillars and disfigured sculptures. Most of it is due to weathering of course, and the nature of the rock itself. If neglect is one aspect of this condition, the other aspect is the rampant use of concrete in the name of ‘restoration’. Then, there is sheer indifference, with not a single guide available at the site, and the guards left alone to do the impossible job of handling and regulating the masses of visitors.

While it is easy to blame others for the sad condition of sites like these, I was keenly aware of how little thought we ourselves give to our actions, when Dr. Pandit repeatedly had to ask us not to lean against the walls. While we tend to think of them as stone, and thus unaffected by our weight, little did we realise that every single wall was once covered with a layer of plaster, and then brightly painted. Traces of the plaster and the paintings still remain on these walls, and are so easily harmed by an action as simple as leaning against it. When we, as those who care for this heritage, are liable to damage the caves in such unsuspecting ways, what then, can we say to those masses of people who have absolutely no idea about it? Especially when there are so many caves, spread over such a large area, that no one can possibly maintain a watch over it all!

When I began writing this post, I wanted to write about Kanheri and its art, tell stories of the caves, those who built them, those who paid for them, those who lived here, and those who came here. However, two factors made it impossible for me to write about the caves without getting my personal fascination for them out of the way – first, the years of regret in not visiting the caves, and second, visiting them with Dr. Pandit, who knows the caves so well, and whose passion for them is palpable when he talks about them! I returned from the three day site seminar, completely overwhelmed, unsure of what I would write about, and if I ever would be able to do justice to the caves and their stories. And yet, there was a sense of urgency, to pen down my thoughts, before they escaped my mind. This post is a result of such thoughts, and, as the title suggests, is simply an account of my first impressions of Kanheri.

Coming up next : The Art of Kanheri