March 23, 2017
The massive walls completely shield the temple from view, and it first appears to be a fort or a citadel. Even when we enter the gate, the central structure doesn’t conform to our ideas of what a temple should look like. Built on a high platform, with an open pillared hall, topped by domed chhatris, the temple of Laleshwar Mahadev, locally called Shivbari, seems to be a blend of architectural styles.


Entering the temple, the first thing we see are intricately carved doors and frames, contrasting with the plain exterior. Then we see the beautifully cast bronze image of Nandi, the vehicle of Shiva. 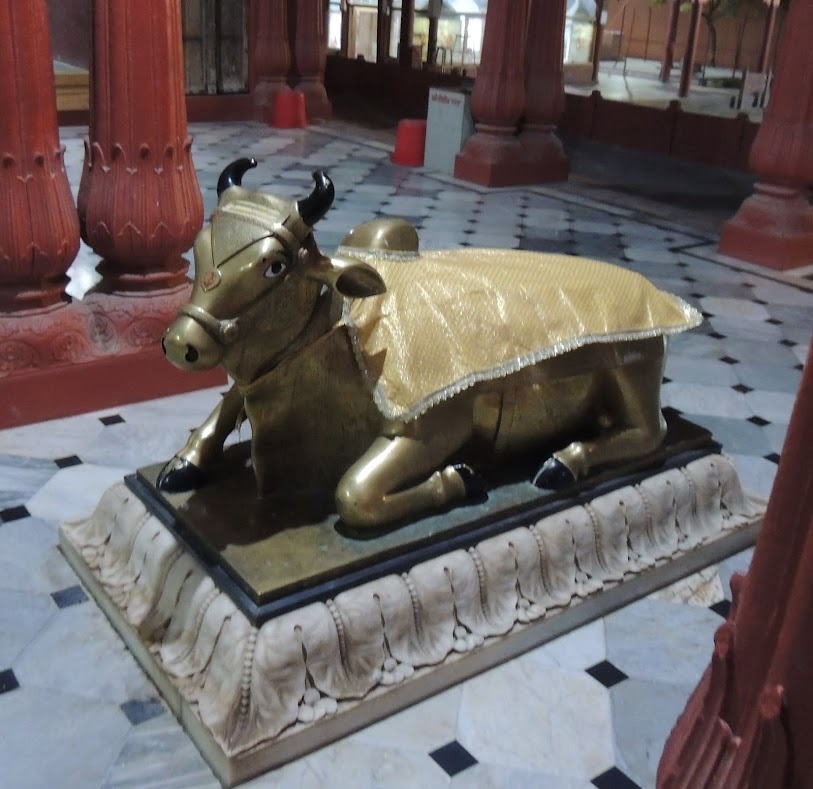 It is only then that we see the Lord himself, who is present here as a Pancha Mukha Lingam, with five faces, each representing one of his aspects.

I entered the temple without any great expectations, lulled by the simplicity of the structure. But the lingam captured my attention, and held it, till I looked up and saw the paintings on the walls, embellished with gold!

The central painting, just below the ceiling of the sanctum, depicts the Lord as he is seen here – with five faces. Worshipping him are, on the left, Brahma, Ganesha, and Kartikeya, and three seated sages, who seem to be the saints who lived here, in the ashram complex. On the right are what appear to be the kings of Bikaner, probably Maharaj Lal Singh, in whose memory the temple was built, and Maharaj Dungar Singh, who built this temple in 1880.

All around this are more paintings, which can only be properly seen from the sanctum, where we are not allowed. However, the ceiling of the pillared hall which runs around the sanctum is also covered with paintings, and is a sight to be seen!

There are paintings depicting stories of Shiva and Parvati, and also of Krishna. The work is extremely detailed and intricate, and there is so much to see and identify.

The temple was once part of a Mutt, or a monastery, of Shaivite saints, followers of Adi Shankaracharya. There are other temples in the complex, including another Shiva shrine set up in memory of Maharaj Dungar Singh. The deity here is called Dungareshwar Mahadev, and devotees here have a unique way of communicating their prayers to the deity. They scribble their wishes on the walls of the temple, in the belief that it will come true! Whether their belief is valid or not, it was fun to read the variety of prayers scribbled on these walls!

Over the past few days, I have written about the other temples I visited in Bikaner – The Karni Mata Temple, the Jain Temple and the Laxmi Nath Temple. These are the only four I visited, though there are many more interesting temples in the region.

Among these four, the Karni Mata and the Laleshwar Mahadev are located away from the city. Both are simple structures, and both are built in the form of citadels, with towering walls around them. Both are connected to royalty, having been built by different kings. However, while Karni Mata is worshipped to this day by the royal family, the Laleshwar Mahadev is connected to Shaivite monks, and is worshipped by devotees of Shiva.

On the other hand, the Jain temple and the Laxmi Nath temple are both situated within the heart of the city, right next to each other. Both temples were built in the early days of Bikaner, for two different communities – the Jain temples for the merchants, and the Laxmi Nath temple for the local Vaishnavs and for the royals who considered him their patron deity at the time.

The one striking thing, which connects these temples, is the art. In the Karni Mata temple, this is seen in the form of miniature paintings on the door frame, while at all the other temples, the ceilings are profusely painted, and the special ones embellished with gold. It is at the Jain temple that these paintings cover every inch of the wall, overwhelming us by their presence.

It is this art, which does not belong to any particular religion, but is a specialty of this region, which connects these otherwise disparate temples – built for different communities, sects and religions!