March 09, 2017
The caves at Kanheri are awe-inspiring. To begin with, there are over a hundred, spread over three hills! Then, there is the fact that they were in use for over a millennium! Add to this the wonderful art in the caves which still remains, after centuries of neglect. Taken together, Kanheri is a fascinating place, one that makes us want to delve further into its history and its stories.

Over the past week, I have written about my thoughts on Kanheri, and the art, which fascinated me. However, there is one more aspect which needs to be written about, without which this series would be incomplete. And that is – the people of Kanheri. They have flitted through my earlier posts, nameless and faceless, and, for the better part, that is how they remain. Yet, they need to be spoken about, because, without them, there would be no Kanheri.

The people we know most about are the donors, the patrons of Kanheri. They donated caves, parts of caves, water cisterns, steps, pillars, etc., probably based on their financial capability. All donations had just one purpose – the earning of religious merit. These donations, along with their names, and names of their family members, who would share the merit, were painstakingly inscribed on the walls and pillars of the caves, a constant reminder of their generosity, as well as the merit due to them. I was fascinated to learn that trade guilds handled these amounts, and made arrangements, not just for the creation of the caves or the structures they were meant for, but also for their maintenance, for years.

I wonder, if these donors were only concerned about the religious merit which accrued to them, or if they were conscious even then, as their names were inscribed on stone, that they, and their lineage, would be an important part of history, to be remembered, centuries, and indeed, millennia after their passing!

The main Chaitya, Cave 3, for instance, was begun, according to inscriptions, by two brothers – Gajasena and Gajamitra – and completed by a merchant, Aparenu. The latter, Aparenu, makes an appearance once again in Cave 21, where he is mentioned as the son of Ananda, and as a merchant from Kalyan.

Interestingly, this inscription from Cave 21 also talks of the concept of ‘Adhapana Khetiya’, where he, as the owner of half a share of a property, hands over his share of the product to the order.

Thus, we learn that the donors made repeated donations to Kanheri, for different purposes. While Aparenu must have donated an amount for the completion of the Chaitya, and for building another cave, he also made arrangements for regular produce from his fields to reach the monks, providing for their needs.

Donations weren’t only for the building of the caves, and for the sustenance of the monks. An inscription talks of the donation for building the reservoir, which provided water for all the caves. This inscription mentions the donor as Purnaka, or a follower of Purna, whom we have heard of, in the stories of the Buddha, and who is believed to have brought Buddhism to Sopara.

Most of the donations during the first phase of Kanheri, during the Satavahana period (2nd to 4th century C.E), are from lay worshippers – merchants, administrative officers, and rich Brahmins. Thus, it appears that it wasn’t only Buddhists who supported the caves, but anyone who could afford to, the only factor being the accumulation of religious merit!

While the inscriptions mention the names of the patrons, they are rarely shown in art. Except for the figures in cave 3. 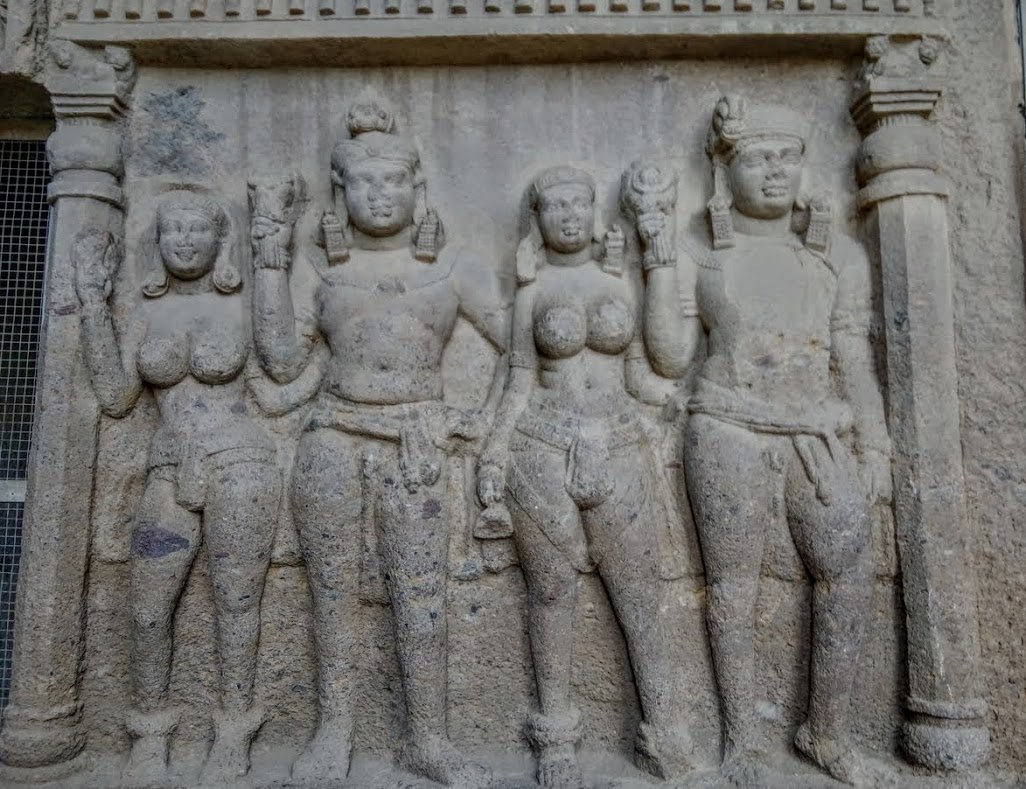 The figures of donors in Cave 3 are from the second phase (5th to 6th century C.E), probably those who commissioned the massive Buddha sculptures, and some of the other figures in the cave. Were they meant to be symbolic, or were they portraits?  Depicted as tall and well built, their clothing might appear simple, but their jewellery, especially the ‘simha kundalas’ (ear-rings with lion faces) are elaborate, and resemble the jewellery from Ter (near present day Osmanabad, and then an important centre of trade).

The donations and donors seem to come from everywhere… nearby sites like Magathane, which must have been a satellite settlement, bigger towns and port cities like Kalyan, Sopara and Chaul, and from places as far away as the Sindhu province (which could be Sindh), to mention a few. That the fame of Kanheri had spread so far, during the 4th and 5th centuries, tell us just how popular the settlement would have been, and how significant.

Then, there were the monks.

They were all Buddhist, but they belonged to different orders, with subtle differences in beliefs, which set them apart.

During the second phase of Kanheri (5th to 6th century C.E.), an inscription from Cave 3 refers to the Acharya Buddharakshita. The reference to the monk as a teacher shows the progression of Kanheri, from being simply a religious site, to an educational one, with the monks taking on the role of Acharyas, and passing on their philosophies to their students.

Monks during this period also seem to have made donations. One of the inscriptions mentions the donation of a Buddha figure to a chaitya by Shakya Buddhaghosha, who also seems to have had a cell in the courtyard of the same Chaitya. There are other references to donations by monks and nuns, probably provided by their family members, or from their own possessions.

During the third phase of Kanheri (7th to 11th century C.E), there are references to the Shilahara kings of the 9th century making endowments for worship, repairs to the Viharas, and clothes for the monks. It is interesting to note that while the Shilahara kings were Hindu, and supported many Hindu temples, they also made donations for the upkeep of these Buddhist Caves, even though Buddhism would already then have been in a decline.

That Kanheri had not yet declined during this period, is evident from the inscriptions which talk of donations by the Gomin Avighnakara, a devout worshipper of Buddha, who had come all the way from Gauda (Bengal). It is also very interesting to note that his name turns up in inscriptions once again, about 25 years later, this time as a witness to a donation, suggesting his prolonged stay here.

There are also references to other Acharyas, as well as students, who came here to study. Hieun Tsang is believed to have passed by Kanheri as well, and inscriptions speak of a library and funds for copying manuscripts, something which would have been of great interest to him. The sculptural details, along with the inscriptions also suggest the movement of ideas through Kanheri,  thus emphasising the idea of Kanheri as an important Buddhist site on the Western Coast.

These are the people of Kanheri we do know about. Yet, there are many more responsible for their existence, and their popularity, whose names are not etched on the stone, who remain nameless, and faceless, yet no less important. These are the people who created these caves and the sculptures, who plastered and painted the walls, who carved and fitted the wooden doors.

In cave 1, which was probably one of the last caves to be excavated in the 6th century, and remains unfinished, still bearing the marks of chisels, we learnt of the guilds who worked here. They were probably part of one family, different members performing different jobs – while the older ones directed and advised, the younger men would do the actual work, of excavating and cutting the solid rock, while the women and children probably cleared the debris. They learnt as they worked, and as they grew older, did better, and more detailed work.

Did they live here? Perhaps not. They may have lived down in the villages and trudged up here daily, to earn their livelihood.

The monks probably trudged up and down regularly too, since they were supposed to live off alms.
As I plodded up and down over the three days, I silently admired the people who lived here. They must have been resilient, and fit, to have done this, day in and day out.

Then, there were those people, once again, unknown, who came here to worship. There must have been festivals, or celebrations, which attracted bigger crowds as well. How did all these people come here?

Watching the hordes of people who arrived at Kanheri during the weekend, I wondered if there was any similarity between then and now. Did people turn up in groups, chattering and talking loudly? Or were they silent and sombre, respecting the spiritual atmosphere? Were there carts along the way, to ferry people up the hill? Were the roads lined with vendors selling fruits, or maybe snacks? Did people bring along their children, and did they clamber over the boulders as they do today?

I would like to believe that things aren’t too different. A site like Kanheri, I believe, would have attracted crowds, especially for the festivities. There would have been excitement in the air, the caves would have been spruced up, banners and flags probably flying around. People would have come to worship, but also out of curiosity and interest, to see what was on.

It isn’t really all that different now. Masses of people come every weekend, just because it’s there. They may not understand Buddhism, or the art and architecture of the caves, but they come, nevertheless, seeking a change from their routine lives. Then, there are people like us, for whom it’s all about the caves, of trying to understand the concepts behind them. And finally, there are people like Dr. Suraj Pandit,  and Vinayak Parab, who have a deep seated passion for the caves, and who seem to know intimately, those who lived here once.

The only difference between then and now, is, that the caves were inhabited then, the place alive, with chants and prayers echoing over the mountains.

There is a moment which has stayed with me from the seminar - a moment  on the last day, when Dr. Pandit asked us if we had seen the monks. As we bid goodbye to Kanheri, it was evident, that we had. We may not have seen their faces, we may not have registered their names, or their individual stories, but we had felt their presence, felt them brush past us, invisible, yet present in intangible memory. And that, at least for me, is what I shall cherish most, as a memory of those three days at Kanheri.

This is the last of my three posts on Kanheri. Do read the other posts, if you haven't already done so. While three posts on the caves might seem a lot, these barely scratch the surface, and I have only written about a few aspects, that I felt I could do justice to. There is much, much more to these caves, and if you ever get a chance to attend the site seminar, which is held in November/ December every year, please do so.

Note: Almost everything I have written is based on three days of learning and discussions during the  Kanheri Site Seminar with Dr. Suraj Pandit. The imagination and the words are my own, of course, though it wouldn’t have possible to see Kanheri the way I did, if it wasn’t for the invaluable experience of Dr. Pandit, Dr. Anand Kanitkar and Mr. Vinayak Parab. Thank you so much Sirs, for showing us Kanheri the way you did.