Paintings at the Pundrikji-ki-Haveli, Jaipur

June 07, 2017
I first read about Pundrikji-ki-Haveli on the ASI Jaipur circle website. It is said to be the home of Pandit Ratnakar Bhatt, the royal purohit (priest and advisor) at the court of Maharaj Sawai Jai Singh II, the founder of Jaipur. As the story goes, the pandit, originally from Maharashtra, was studying Astrology and Tantra Vidya at Kashi, where he met the King of Jaipur. Impressed with his knowledge, the king brought him back to Jaipur, making him the royal purohit. He was also given the title of “Pundrik”, probably an association with the town of Pandharpur (where he might have hailed from). The king, it is said, built him a Haveli, which came to be known as Pundrikji-ki-Haveli. The Haveli has some excellent examples of paintings, of the Jaipur style, prevalent during the 18th century. 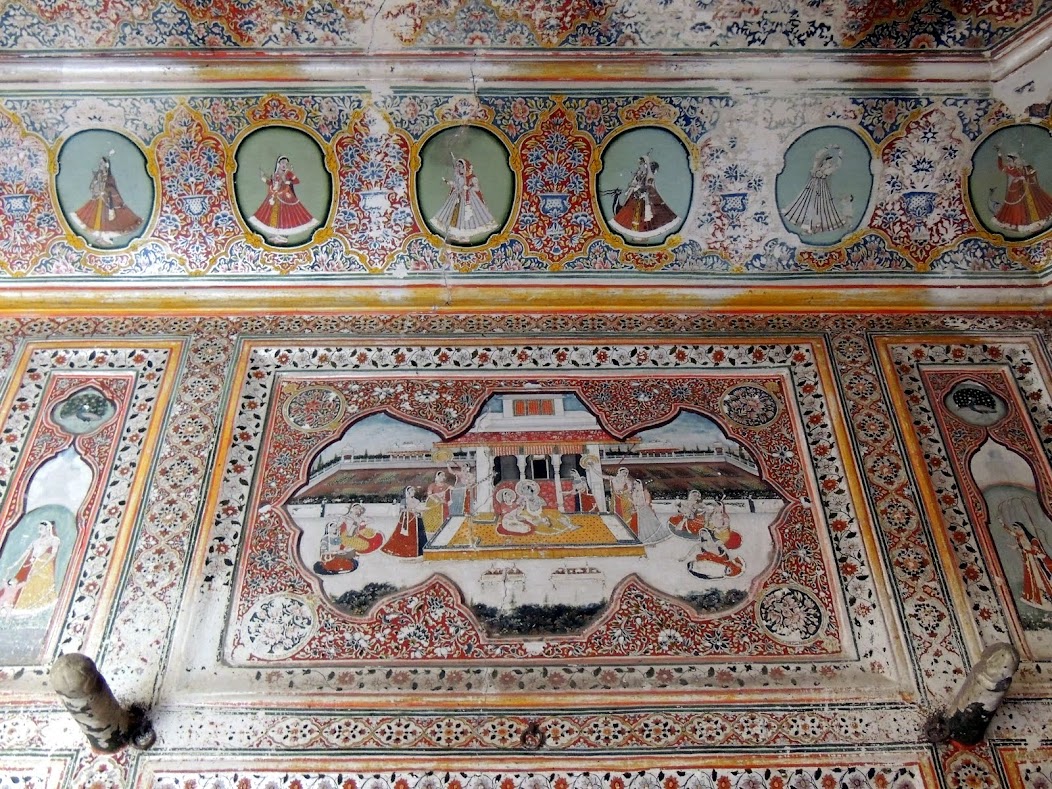 Our visit to the Haveli is a long story.


Having already visited Jaipur in 2012, and in no mood to visit the palaces again, I was looking for some unexplored sites in and around Jaipur, to spend the one day I had there. Most intriguing among the sites I had read about, was the Haveli. However, as it turned out, neither our hosts, nor our driver, seemed to know exactly where the Haveli was. Unwilling to spend the day roaming around searching for one Haveli, we decided to visit Bhangarh, Neelkanth Mahadev, and Abhaneri instead. However, the next day, with time to spare before we had to leave for our flight, we hopped into an auto, and asked the driver to take us to Brahmapuri, which is where the ASI site said the Haveli was. The auto driver was sceptical, saying that we should rather visit the city palace, but took us along, nevertheless.

Even at Brahmapuri, no one we asked seemed to have heard of the Haveli, and we despaired of finding it. However, having come all this way, we decided to simply drive around for a while. The auto driver grumbled, but obliged. As we drove through the market, I caught sight of the familiar blue board of the ASI, and there it was – the Haveli, with a big board announcing its importance.

However, our challenges were far from over. The gate was open, and so were the doors, but there was no one in sight, and we couldn’t see where the paintings were. We were on the verge of giving up, when a tailor from across the road called out, and said the caretaker had gone for tea, and would be back shortly.

With time on our hands, we sat down for a wait, and soon, the caretaker appeared, back from his break. “No one ever comes here, that too this early in the morning” he explained, and proceeded upstairs, to unlock a door.

From the outside, the Haveli was simple, newly painted, and bare. The room the caretaker led us to, seemed to be just a small one, just as unimpressive as the rest of the house.

Once he opened the door, it was another story. A burst of colour greeted us, and I was stunned to see that every inch of the walls and ceiling was painted in bright colours. With so many paintings, it was quite difficult to decide what to see first! Samhith and Shankar were just as stunned as I was, and the three of us simply stood and gaped, before collecting ourselves, and looking closer at the paintings, one by one. 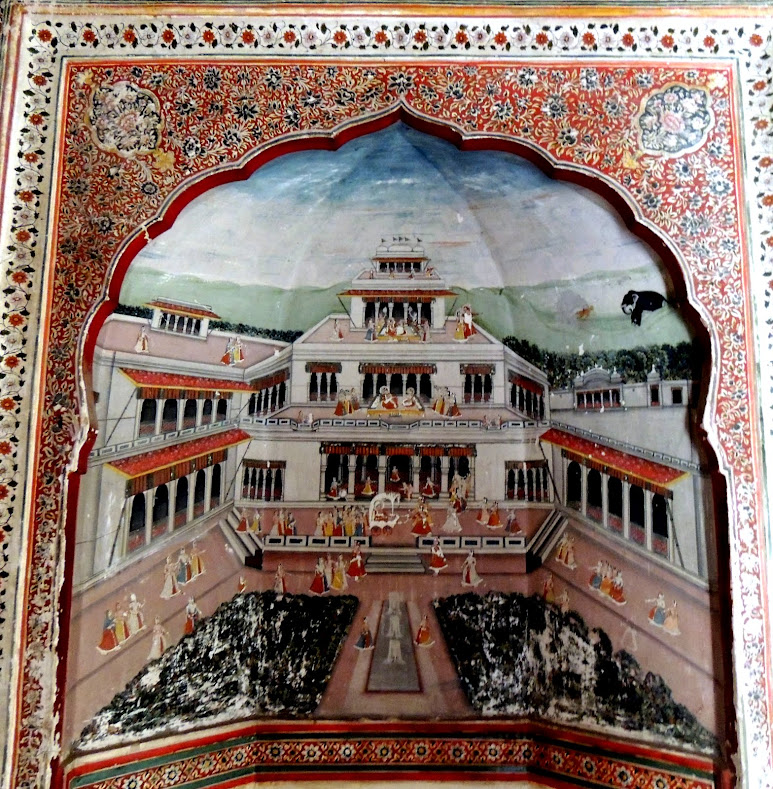 The paintings depict scenes from royal life – festivals, celebrations, feasts, and processions. The king shown in the paintings is probably Sawai Jai Singh II, since he was the ruler then, and the patron as well.

There isn’t much I can tell you about the paintings, since there is very little information about them, and my knowledge of miniature paintings is rather inadequate. However, they are a visual treat, so go ahead and take a look at some of them.


Most of the paintings seem to depict the city palace at Jaipur, since it would have then been the seat of the king.

However, interestingly, some of the paintings also depict Amer and Jaigarh, especially this one.

While the ASI board suggests this depicts movement of the army, do you think this could probably depict the shifting of the capital from Amer to Jaipur?

The caretaker was helpful, but he didn’t have answers to many of our questions. He told us that the Haveli had originally belonged to a family, before the ASI had taken over, which is why so few paintings remained. Was the entire Haveli painted? He didn’t know for sure. After all, the entire place had been painted and repainted many times. Why then, did this sole room survive? Was this perhaps a special room? A puja room for instance, which, for religious reasons would have been left untouched? Though, I doubt this would have been a puja room, since there are no images of Gods. If I had to guess, I would say that this might have been where the purohit would have received important guests, going by the paintings of festivals, celebrations, and the king with the queen. Why did this room survive then? Or, was it the only one with such detailed paintings? No one seems to know.

Coming out, watching the caretaker lock the door once more behind us, I looked at the rows and rows of houses, old and new, spread out ahead of us. Jaipur still has remnants of houses and Havelis from the time the city was built. We know about the grand palaces and mansions that have been turned into heritage hotels, where the intricate paintings and murals have been preserved. However, I wonder how many such Havelis remain, where such treasures lie hidden behind closed and decaying doors, hidden from our eyes?