Solapur is an important city in Maharashtra most well known for its textile industry, and bed sheets in particular. I remember my mother waiting to buy Solapur bed sheets at the Solapur station en-route to Chennai (then Madras) during my summer vacation. All other bed sheets were considered inferior quality than the Solapur ones, and to do them justice, they outlive all the other varieties. There is still one Solapur bed sheet with a beautiful peacock pattern, one that was bought almost 20 years ago still occupying the pride of place in my mother’s house.
We visited Solapur en-route to Pandharpur, Tuljapur and Akkalkot, and stayed overnight there for the purpose of catching the train back to Bombay. We had a few hours free and decided to visit the local Shiva temple, called the Siddheshwar temple, as it was a Shravan somvar (i.e. a Monday in the Indian month of Shravan, which is considered auspicious for Lord Shiva). We hardly knew what a treat was waiting for us, and I regret not taking along my camera.
We had to stop our vehicle quite far away from the temple, as it was a festival day, and there was a sort of fair going on around the temple. The local artisans, craftsmen and traders were peddling their ware all along the road, and it was tempting to buy almost everything in sight. We controlled our urges however, and went straight to the temple, which is situated on a lake. 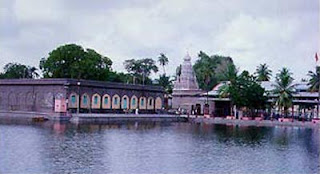 The temple, situated in the middle of the lake, is picturesque; with a backdrop of the fort looming behind it. The temple was built by a yogi, Shri Siddharameshwar, who was a devotee of Sri Mallikajuna of Srisailam. He was on his way to Srisailam, when he was ordered by his guru to return to Solapur and consecrate many Shiva lingams. He duly returned to Solapur and began his work, starting from this temple. In all, he installed 68 Shiva lingams in Solapur, the list of which is given at the end of this article.
It is believed that Sri Siddharameshwar dug the lake himself, when all the holy rivers came and asked for permission to reside in the lake, thus making it sacred. There are a number of fish in the lake, and the locals consider it holy to feed them. As a result, there is a crowd of vendors selling foodstuffs to feed the fish... The lake has been kept reasonably clean, considering the amount of food thrown into it.
Apart form the main lingam of lord Shiva, there are temples of various other gods in the temple complex which is considerably huge.
Shri Siddharameshwar himself attained Jeeva Samadhi in the temple complex itself, and his Samadhi itself draws a lot of crowds.
The Siddharameshwar trust looks after the maintenance of the temple, and it is doing a good job. The temple itself is well maintained and clean, when there are crowds, there is a good queue system wherein men and women enter the sanctum sanctorum separately, and they have a shop where they sell books relating the temple’s history and photographs. Apart from all this, what is really noteworthy is the amount of charity and good works done by the trust. They run schools, colleges and hospitals, and when we visited the temple, they were collecting funds for cancer treatment of those who couldn’t afford it. They have a huge library within the temple complex with some good collection of religious literature. We came away quite impressed, and today, one of the most prominent photographs in my puja room is of the Siddheshwar temple. We did not have time to visit all the other 67 lingams consecrated by Sri Siddharameshwar, but we intend to make another visit soon. For anyone who wants to visit the temple, I am including below, the temple address as well as a list of al the 68 lingams.

Games for Kids of the World