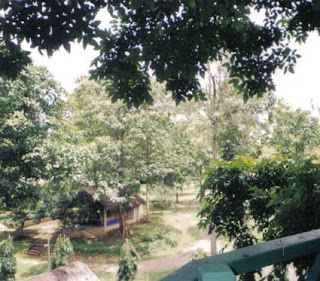 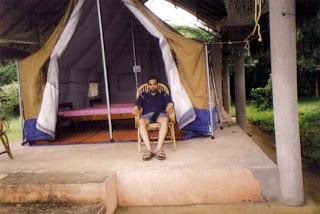 A view of a cottage and tent at Kali River Lodge, Dandeli

I have been thinking and thinking about my next blog post. “Which place shall I write about?”- That is the question. Now, you might think I have visited so many places, that it is difficult to choose one of them to write about, but that is not the case.
I have always wanted to travel. I remember cutting up travel articles from magazines and newspapers, wanting to go there sometime; reading about a place in a book and imagining myself there; wanting to see everything, from the ruins of ancient civilizations, to the modern mega-cities. I have yearned to visit the deep jungles of Africa, as well as the modern amusement parks and zoos of the world….

All this was just a distant dream, one of the many dreams that I had, but this dream is at least coming true, if only up to a point- For, one of the few interests that my husband and I share is traveling. We both love going to new places. Of course, there are differences-- I love historical places, and can spend hours in a fort or a temple, lost in the beauty of the architecture, he can’t stand looking at anything for long, and can’t imagine what’s so interesting about a fort that is almost completely in ruins…..But we both love jungles, isolated, and out of the way places. And, thanks to my mother-in-law, he enjoys visiting temples (as long as it’s not only temples on the agenda ! ).

In the last 6 years since my marriage, I have visited so many places, some just with my husband, some with the whole family, and every one of those trips has been memorable. I would love to write about many of those trips, but unfortunately, I am no good at keeping a diary, and, though I remember the places we went to, the details are lost, making it difficult to write about them.

I have gained so much from these trips, apart from the magical experiences- how to make a plan (No one in my family will move out of the house without making a detailed itinerary, with the latest maps and distance charts), how to manage my son, who, like me, suffers from travel sickness… the list is endless, as are the places we went to……

One of the first places I visited with my husband, was Dandeli- the Kali River Lodge, a part of the Jungle Lodges and Resorts, Karnataka Tourism. We had just been married a few months then, and Shankar had a few days off. He had visited the Jungle Lodges and Resorts camp earlier during his college days, and wanted to visit the one at Dandeli. He asked me to make the bookings. It was the first time I was booking anything (other than train tickets! ), and was rather apprehensive about the cost, the quality of accommodation, etc. All my fears were baseless, however. I went to the Karnataka Tourism office at the World Trade Centre, Cuffe Parade, where the person in-charge of the Jungle lodges section was very helpful. My booking was done in minutes. Incidentally, they are always very helpful and efficient, and I would recommend them to anyone wanting to travel in Karnataka. Of course, they are not cheap, but then, one comes back from a holiday, satisfied that our money was well spent.

Traveling to Dandeli was the only problem that we faced, as there was only one bus going there from Bombay. Thankfully, as it wasn’t the holiday season, tickets were available, and after a 12 hour quite-comfortable bus-ride, we were at the resort. The resort is right at the edge of the forest, and is really a beautiful sight. The two days and three nights that we spent there were really divine
. 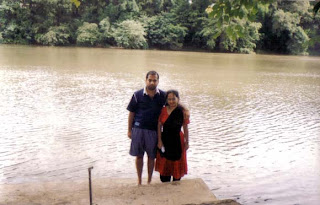 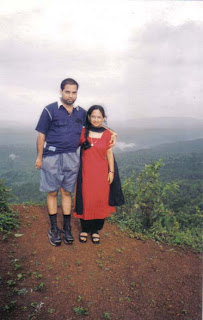 Enjoying our first real vacation together !! on the river and in the quarry 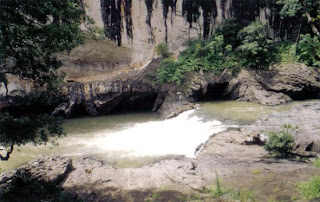 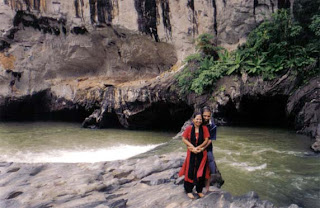 One morning we went for a coracle ride, which was the only adventure activity available then, but it wasn’t so much an adventure as a pleasure… and then we went crocodile-spotting… Of course, the crocodiles didn’t want to e spotted, but the guide didn’t give up, and finally we did manage to see a few of the lazy ones who were busy sun-bathing, and obviously didn’t want to be disturbed. We even went for a jungle- safari in a jeep, but didn’t see anything much except for a few monkeys and deer. There are supposed to be herds of bison in the forest, but they managed to evade us… The guide took us to an abandoned iron quarry in the jungle, from where I brought back a piece of rock as memento.
On our return to the resort, we were lucky to see the beautiful bird, the Great Indian Hornbill… a sight which I shall never forget….. 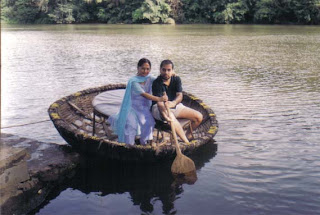 We enjoyed ourselves roaming around the vast area of the lodge, walking along the river Kali which flows through the lodge, and going for treks with the local guide. We even visited a tribal village there, and brought back lots and lots of photographs as memories. 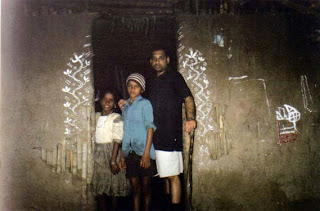 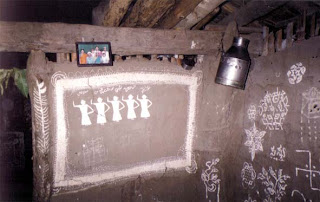 Some photos of the tribal village.. and their art !!! 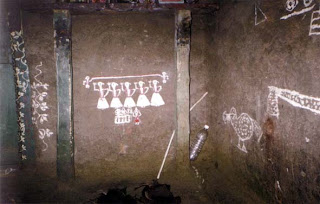