May 26, 2009
Out of the clouds appeared the colour green, which soon clarified into trees – bright green palms – and then, as we turned, we saw what we were yearning to set eyes on – the clear sand fringed by the palms on one side and the clear blue of the Arabian sea on the other. From our vantage point, the sea appeared never-ending, as did the sands of the coastline of Kerala. And then, we were landing at Thiruvananthapuram airport, which looked like just another typical Kerala house with red tiled roofs – a simple and homely kind of airport. What a wonderful beginning to a much awaited vacation. Never mind that our flight was delayed and we were tired after a 45 minute stopover at Cochin, we were just happy to land at Trivandrum. After all our changes in plans and re-bookings, I had despaired of ever starting out on our vacation, and here we were, all the 3 of us – Samhith, Shankar and me – starting out for 7 days of exploring.
We headed straight for Ginger, Thiruvananthapuram, taking a prepaid taxi from the airport. We had been planning a stay at Ginger for a while, and jumped at the chance to book rooms there this time. The hotel stayed true to its motto – the luxury of simplicity. Apart from the fact that it was quite a distance from the main city, and the rates are certainly on the higher side, the stay was just wonderful. Samhith loved the idea of trolleys to carry our luggage ourselves, and insisted on riding on it along with the luggage! The staff was also very helpful, always ready with the answers to all our questions. The person at the travel desk was also well informed and obliged with all details, even though we did not hire a vehicle from them, and preferred to get around in an auto. I am planning to write a series of hotel reviews of all the hotels we have stayed in, so more details will be forthcoming then. Meanwhile, for further details, check out their website.

The city itself is a mixture of the old and the new, the ancient and the modern. Though the first impression you get is of an old world city with the typical tiled roofed homes and British-style buildings, a closer look shows you the influence of recent money and newer constructions. The suburbs especially are fast losing their charm with lots of residential complexes coming up. However, what I shall certainly rememeber about this city are the female auto drivers and the petrol pumps wholly manned(????) by women!
Once the capital of the kings of Travancore and today the capital of Kerala, Thiruvananthapuram is literally “the abode of Anantha”, another name for Adishesha, on whom Lord Vishnu reclines. No wonder then, that the main attraction here is the temple to Anantha Padmanabha Swamy – Lord Vishnu reclining on Adishesha. As the capital of Travancore, there are many interesting places to visit in and around Thiruvananthapuram, but we were only passing by, so to speak, and had time only for the most important – the temples and the museum, not to mention the zoo which kept us busy for (too)long……
Anantha Padmanabha Swamy Temple 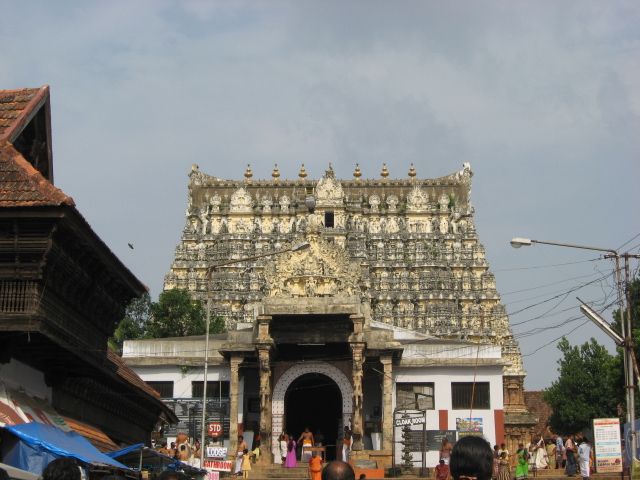 The temple which gives the city its name, the Anantha Padmanabha Swamy Temple is rightly the centre of the town. The temple is just a few minutes walk from the main bus stand and the railway station.

The name Trivandrum is an anglicized form of Thiruvananthapuram, which, in Malayalam and Sanskrit means “the abode of Anantha”. Anantha or Adishesha is the serpent on whom Lord Vishnu reclines, and it is this form that He is seen in this temple – Lord Vishnu stretched out on the coiled serpent, with Goddess Lakshmi seated at His feet, and Lord Brahma seated on a lotus( Padma) emerging from His navel( Nabhi). The beautiful idol of the Lord, made of black stone is absolutely breathtaking. An unique thing about this temple is the main sanctum itself, where the Lord has to be viewed through three doors – the first gives you a glimpse of His head, reclining on Adishesha, whose hood forms an umbrella over his Lord, and His hand stretched out towards us in a relaxed manner, the second shows you His middle portion, with the lotus emerging from His navel, and Lord Brahma seated on it with the Vedas in His hands, and the third door gives us darshan of His feet being pressed by Goddess Lakshmi. For a nominal charge of Rs. 5/-, tickets are issued just outside the sanctum for archana, or prayers to the Lord, and the Prasad is kept at the Lord’s feet and given to us. I tried to enquire about other sevas or pujas that we could perform at the temple, but unfortunately, here, language turned out to be a barrier, for the priests could understand neither Tamil nor Hindi, and I can unfortunately not speak Malayalam.

The temple is a huge one, built on the sands in the Tamil style, with a beautiful gopuram on the main entrance. This was the only gopuram I was able to take photographs of. Neither cameras nor mobile phones are allowed inside the temple (as has become the norm everywhere these days), and they can be left at a cloak room just outside the main gate. It is best to carry only a small purse with you. 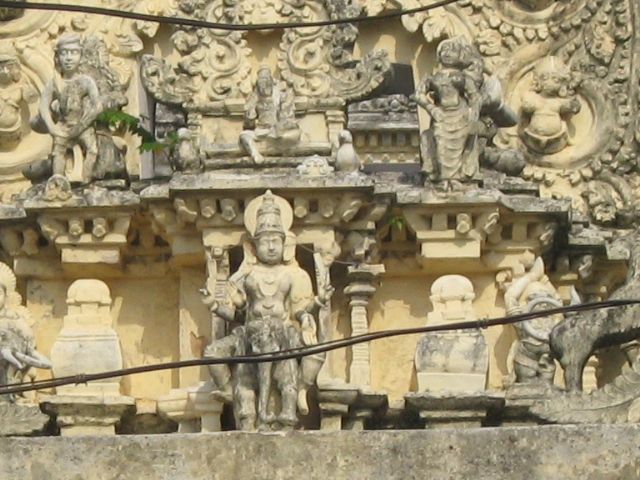 One important thing about this temple (and most others in Kerala) is the dress code. Women are allowed in only in skirts (pavadas) or saris. No pants/Salwar Kameez are allowed. Men are allowed only in Veshti (dhotis). No pants or shirts are allowed. They are extremely strict about this rule, and are not fooled by veshtis over shorts or pants. Shankar tried it out, only to be stopped at the gate, and made to remove the pants and leave them in the cloak room! So, all you guys had better remember – Strictly only Dhotis!!! 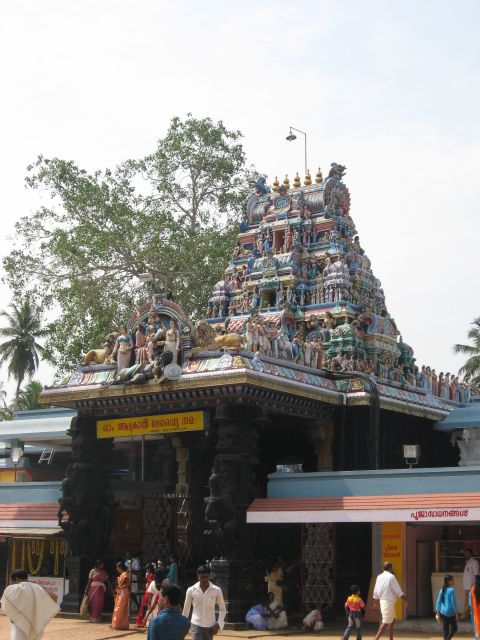 2 Kms from the Trivandrum bus stand is the Attukal Bhagavathy temple, a small temple dedicated to the Devi. According to the legend, the Devi is believed to have appeared as a girl in a dream to a head-man of this area, and asked him to build a temple at this place. She is believed to have been Kannagi, the heroine of the Tamil epic Silapadigaram, who burns up the city of Madurai on the strength of her chastity after she and her husband are unjustly treated by the royal family. Bereft of her husband, she is believed to have arrived at Kerala, and there are various temples dedicated to her all over the state. This is one of them. Kannagi is believed to be an incarnation of Parvati. 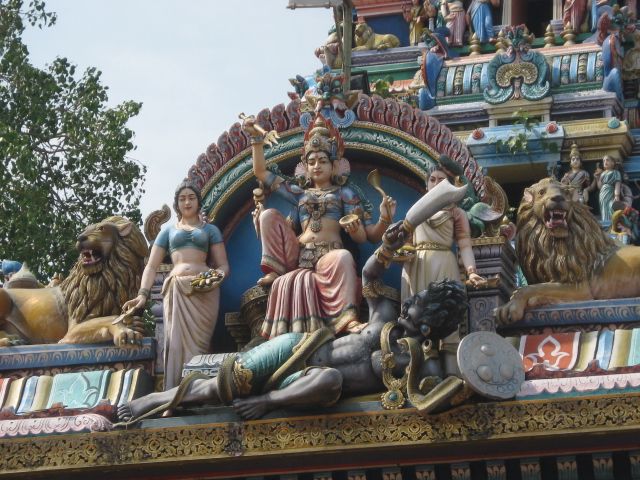 The temple, though small, has some beautiful sculptures, and is much visited by women, as is sometimes referred to as the Sabarimala of Women..

For more information visit the following websites:
There are surely many more temples in and around Trivandrum, but these were all we had time for…. Meanwhile, here are some glimpses of Trivandrum as seen through my camera lens as we went around the city………. 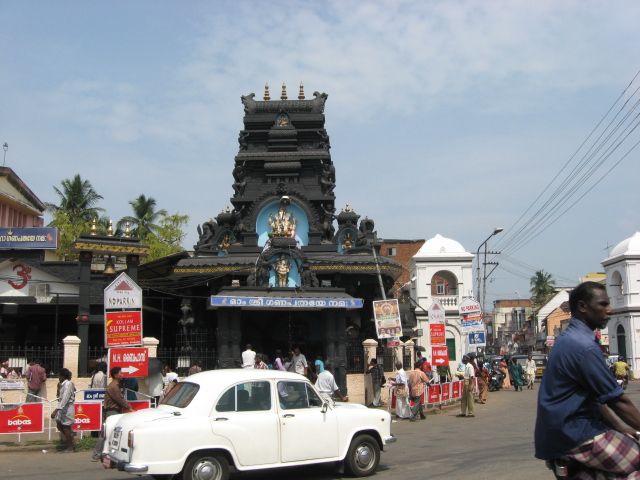 A Ganesha Temple near the bus stand 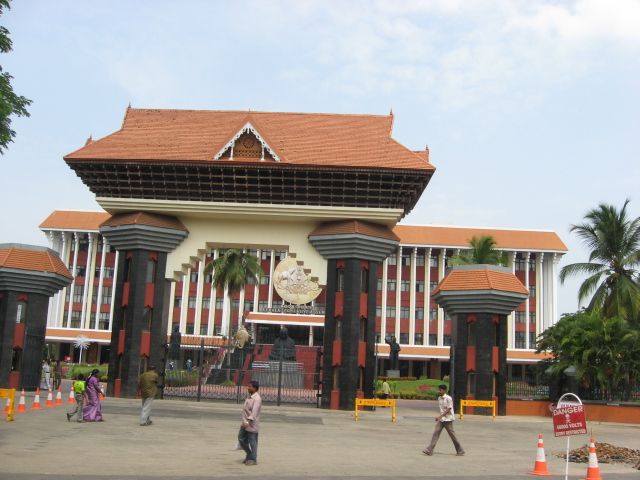 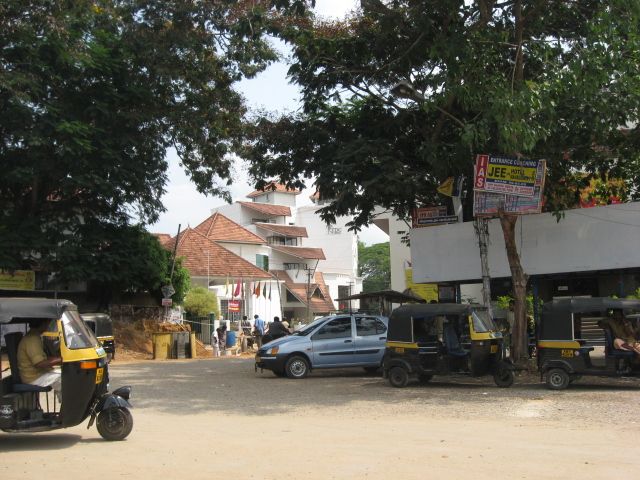 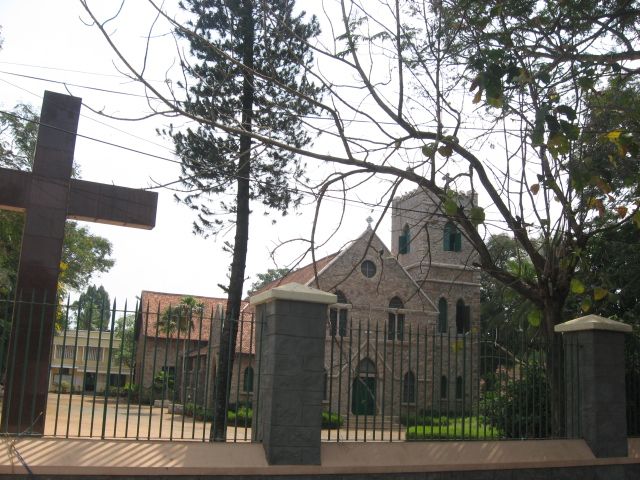 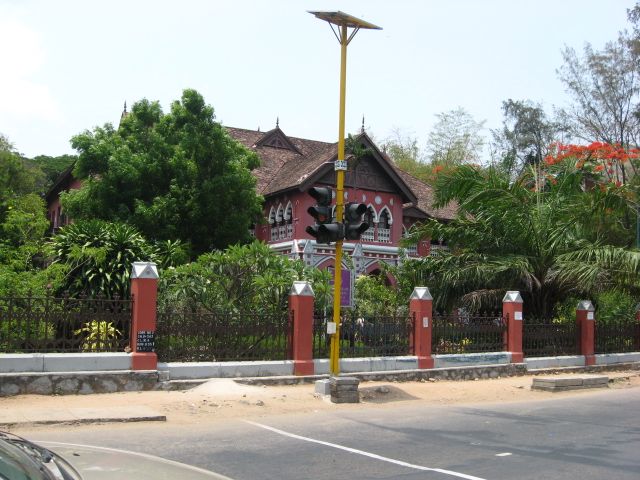