Some Ganeshas at Chembur

August 27, 2009
Having finished with the distant Ganesha pandals, we decided to head for a shorter trip closer home in Chembur. Two of the oldest and most popular Ganeshas in Chembur are those at R.K. Studios and the Duke’s Factory. Of course, there are other bigger Ganeshas too – the Chembur-cha Raja in Camp and the many others in the vicinity, and the extravagant Tilak Nagar Ganesha, but these usually have a long queue waiting for darshan, something for which I lack patience. We started with the aim of visiting just these two Ganeshas, but managed a couple more interesting ones on the way. Come, take a look….

We started with the Ganesha at the Duke’s factory – that’s the one making the famous ‘Duke’s Soda’. The factory employees have installed a Ganesha here for years, and it is one of the most popular ones, for they not only have a huge idol of the lord, but also work hard for the theme of the year. This year, the theme was Krishna Leela – an episode from the life of Krishna – the part where Krishna kills Putana. As the recorded narrative blared in the background, the images of Kamsa, Krishna and Putana moved forward and backward, with the sound and light effects adding drama to the scene, Samhith stood enthralled without moving once from his position! Needless to say, this has been his favourite Ganesha so far!!!! 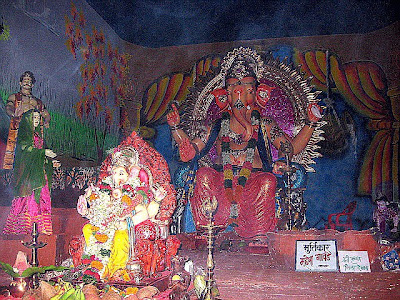 Out on the road in a small enclosure was another Ganesha. We peeped in, only to see an interesting form of the lord – made in the image of his father – lord Shiva. 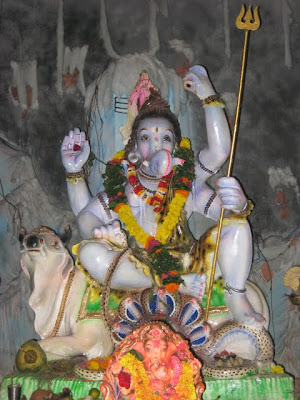 The R.K. Studio Ganpati was installed by the late Raj Kapoor himself at his studio, and the family carries on the tradition dutifully. This is again one of the most popular Ganeshas in Chembur, but thankfully, there wasn’t much of a crowd… The decoration was simple, but beautiful, and just outside were images of the Ashta Vinayakas. 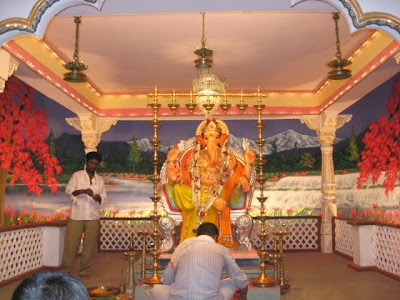 Right next to the studio was another company – I think, Pratibha Industries, who also had a beautiful Ganesha. 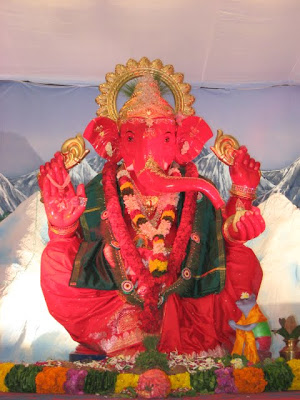 This one had Shiva and Parvati on a swing, which was being rocked by Ganesha’s vehicle – the mouse! 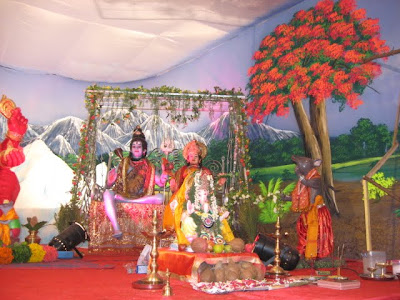 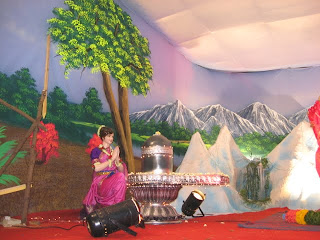 As we walked along the road, looking for an auto to take us back home, Samhith wanted to enter every colony which seemed to have installed a Ganesha. It was with great reluctance that I dragged him back home, for it was getting late, and I had loads of work to do. For once, I wished his school would end early so we would have more time for Ganesh – darshan! On second thoughts, it is probably better this way – otherwise, I wouldn’t get any work done! And how would I write my blogs then?????