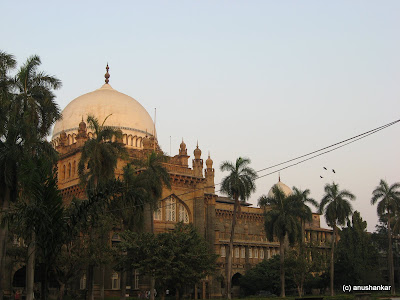 A visit to the Prince of Wales Museum, or to give it its official name – Chhatrapati Shivaji Vastu Sangrahalay - was long overdue, and I decided to take Samhith there on Sunday, as we were all alone in the house and there was nothing to be done at home. 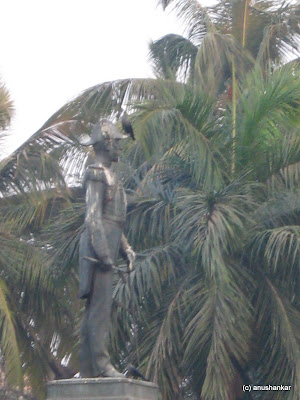 We started from home after lunch and took a train to VT (forgive me if I use the old names – the new ones don’t come all that easily to me). We were lucky to get one of the new trains, and Samhith was delighted, especially the announcements about the next station! 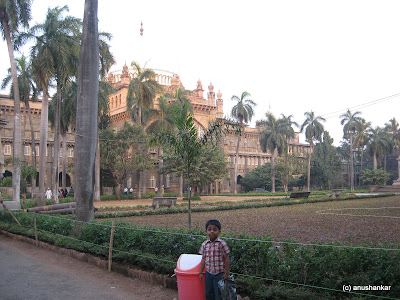 I had planned to walk to the museum, but it was too hot, so I decided to indulge, and took a taxi to the Gateway of India, where we reserved seats on the Nilambari – the open deck bus which takes one around the heritage buildings of Fort and Colaba. 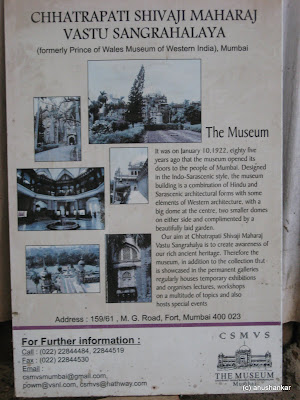 We then headed to the Museum, which was something I was looking forward to, since I hadn’t been there in ages! I guess the last time I visited was when I was in school!! I used to think that maybe Samhith would also make a visit from the school, but these hopes seem far-fetched, since they don’t seem to be visiting any museums (and neither do any of the other schools these days). 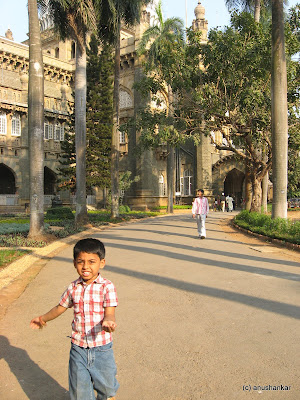 Incidentally, this reminds me of a conversation I had with another kid from the complex. The boy is in 4th or 5th standard, and their school (one of the best in Chembur) took them to the at RBI, since they had to do a project on currencies over the ages. I first thought they had gone to the Prince of Wales museum, since it too has a currency section, but the chap hadn’t even heard of it!!! It was his mother who told me about the project and the museum visit, and added that the boy hadn’t understood anything during the visit, and she had checked up on the museum website, and completed the kid’s project!!!!!!  I sincerely hope Samhith’s school doesn’t come up with projects like this, for I am completely against parents doing the projects for the children. What do you think????? 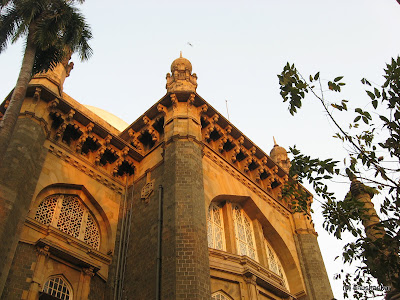 Anyway, coming back to my visit to the museum, I did not take my camera inside the museum, since the camera charges were about Rs.200/-, while the entry charges were just Rs.25/- for adults and Rs.5/- for kids. So sorry, no pics of the artifacts, just of the exterior! 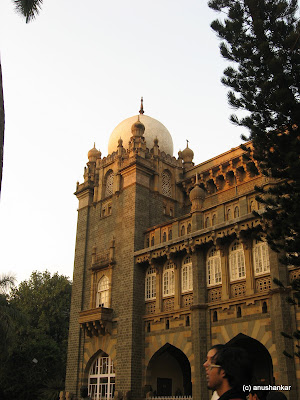 We spent over 2 hours in the museum, seeing the kind of stuff Samhith would be interested in. The arms gallery was being renovated, so it was closed – a big disappointment for Samhith! However, the natural history section more than made up for it (as I knew it would!!). We spent almost an hour in there, identifying the various birds we had seen, and the types of animals. While I remembered our fascination for the huge stuffed blue whale during my last visit, Samhith was more fascinated by the huge Rhino!! When he saw the tiny baby elephant, though, he was really sad, for he couldn’t believe that someone had actually killed and stuffed a baby animal!!! 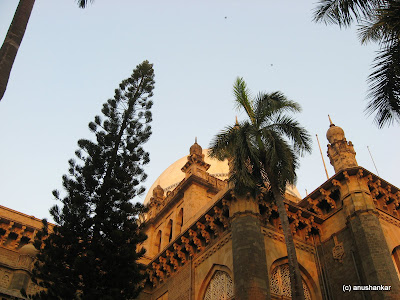 He came along with me through the sections of miniatures and paintings, which he can’t appreciate yet, but he surprisingly took a fancy for the beautifully carved pieces of jade, as well as the tiny, but intricately carved or decorated bottles of perfume! They reminded him of Aladdin and wondered if any of them would have a genie in them!!! 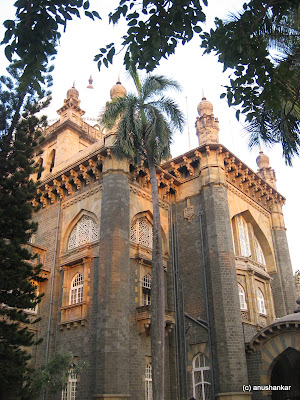 We spent quite a bit of time in the museum store, though we did not buy anything. I have promised to buy him some of the books when he can read them! The store is also being upgraded, and will be shifted soon to a space being developed right next to the gate. In fact, the museum has been modernized quite a bit, and many more plans are being implemented. Looks like by next year, it should have many more attractions for kids….. 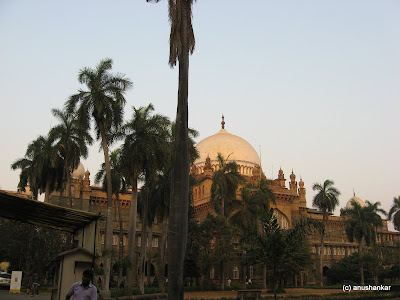 We headed back to the Gateway of India and spent a few minutes clicking the crowd till it was time to head for the bus. We arrived just in time as the bus, and we seated ourselves. Soon, the bus was full (at least, the open deck was – I don’t know about the lower deck!). 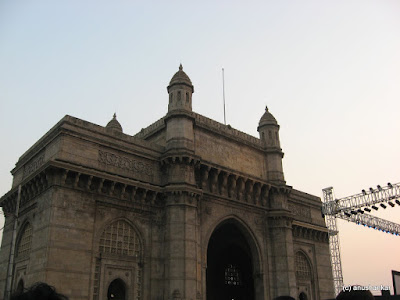 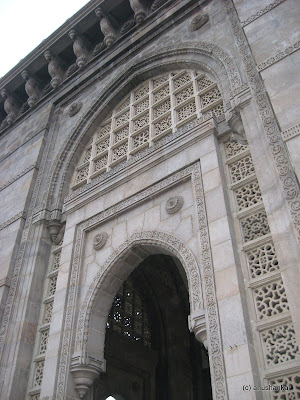 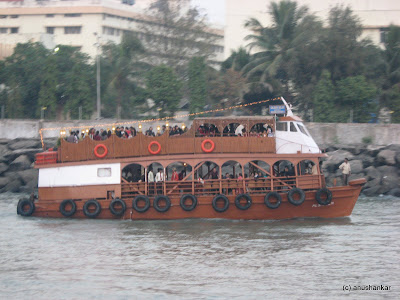 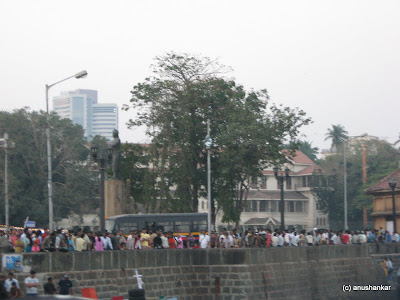 We started a little late after waiting for a couple of passengers who said they had been looking for a parking space, much to the irritation of the guide, but we were finally off, taking a tour along the roads of Colaba, heading out to Marine drive, then to Churchgate, Oval Maidan and the University to Fashion Street, then on to VT and through the Fort area to the Asiatic Library and finally back to the Gateway. 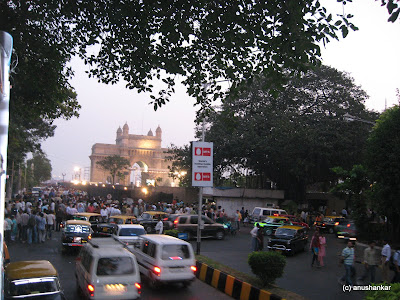 The guide fed us interesting tidbits about the areas and the buildings we were passing by, but it was quite obvious that the information was meant for foreigners and visitors to the city, and not for hardcore Mumbai-ites like me who already knew most of it! Samhith was bored by the commentary, and has accompanied me enough along the same route to be bored by the tour. However, the open deck made up for it, and it was just wonderful, coursing along in it! Another advantage of the open deck was the fact that we were able to look at some of the buildings more closely. I just wished the tour was conducted in the morning, for I could then have taken some good photographs.

By the time we were through, it was past 8PM, and we headed straight to VT… but before we got into the train, we had Pav Bhaji at Canon… that’s where I ate every time I went to VT and Samhith loves it too!!!!!

By the time we were home, it was almost 10PM! It was truly a wonderful day, which took me back to my college days.


Nilambari Open Deck Bus: Only on Saturdays and Sundays. 7-8PM and 8-9PM
Tickets available at MTDC counter at the Gateway of India. For details, check MTDC Website.