Skip to main content
April 14, 2012
No matter which temple you go to, you see people like her. 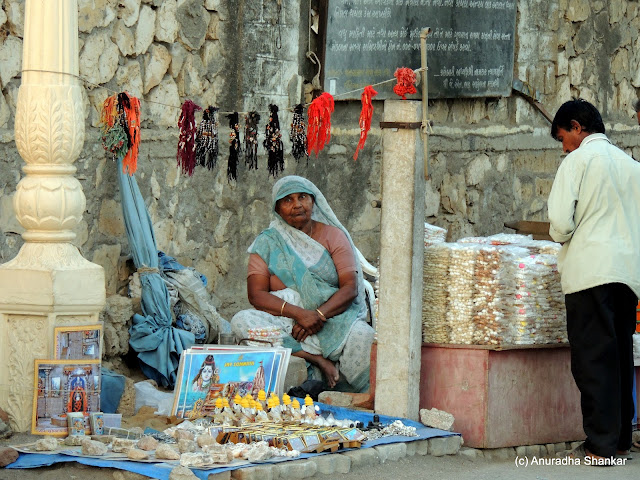 I saw her outside the Somnath temple in Gujarat. She had two stalls - one selling prasad (offerings) to the Lord, and another selling images of the Lord... The threads tied to the string above her are also for sale. They are talismans believed to protect us from evil and troubles.

I clicked her while I was waiting for Shankar outside the temple, and in all the time I was there, she did not get a single customer.... she simply sat there in that same posture, seemingly not bothered about the lack of customers. The other vendors were busy, calling out, actually shouting into the ears of anyone who passed by..... encouraging them to buy things...promising instant salvation in the name of Lord Somnath, or as they put it 'jyotirlingji', but she stood out with her silence.... I clicked the pic on an impulse, and of course, a desire to click something with my new camera!! It was only as I was downloading it that I wondered more about her - What did she think of the temple and the Lord, sitting outside day after day, selling prasad and photos to the odd customer who overcame the tactics of the other vendors to buy something from her?

As I was writing this post, I couldnt decide on a title for it.... What should  I call her ? Seller of Gods? Temple vendor?  Vendor outside a temple? After much deliberation, I decided to leave the title blank.... Any suggestions?