On the Ramayana Trail at Nashik


It is a city which is so deeply rooted in legends that it is impossible to separate the city from its stories – and the temples related to the stories. The minute we step into the city, we are besieged by it. We haven’t even found a hotel to stay in, but our auto driver wants to know if we want him to take us to the temples. “We have been here before” we tell him, and he answers, “But still, you will want to visit the temples. Why else would you come here again?” Our status as tourists and temple visitors seems to be obvious to him, so eventually we relent, telling him that yes, we do want to visit the temples, but we want to freshen up first. We take the mobile number proffered and heave a sigh of relief when he leaves. We are at Nashik, one of the holiest cities in Maharashtra, and also among the oldest. 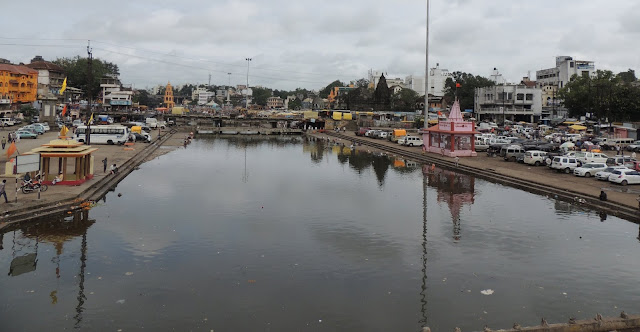 The name of the city derives from the incident the place is most famous for – the cutting off of Surpanaka’s nose by Lakshmana. If you are not familiar with Hindu mythology, that bit comes from one of our most popular epics – the Ramayana. It is believed that Rama, Lakshmana and Sita stayed here during their 14 year exile from Ayodha. This is where they attracted the attention of the demons, in the form of Surpanakha, the sister of Ravana, who was attracted to Rama. To teach her a lesson, Lakshmana disfigured her by cutting off her nose, thus giving this place the name – Nasika – meaning nose. Over the centuries, the place came to be known as Nasik or Nashik. This is also believed to be the place where Ravana, hearing of the beauty of Sita, abducted her, which led to the events so well told in the Ramayana.

Nashik is also where the river Godavari comes down from the mountains, and on her banks are temples galore. We start our tour at the Ramkund, where Rama is believed to have bathed in the Godavari. Around the Ramkund are located most of the temples in Nashik, but this post is not about them. This post is about the temples related to stories from the Ramayana. 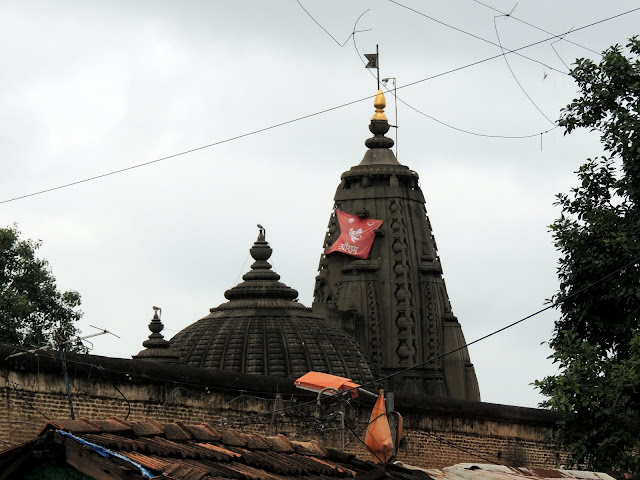 Our first halt is at one of the most popular places in Nashik – Panchavati. The place gets its name from the five banyan trees which stand here, in a sort of a circle. They are conveniently numbered for the pilgrims who throng here at all times of the year. 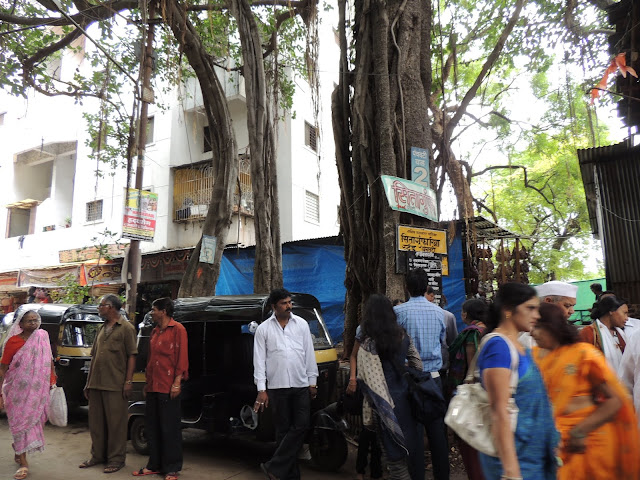 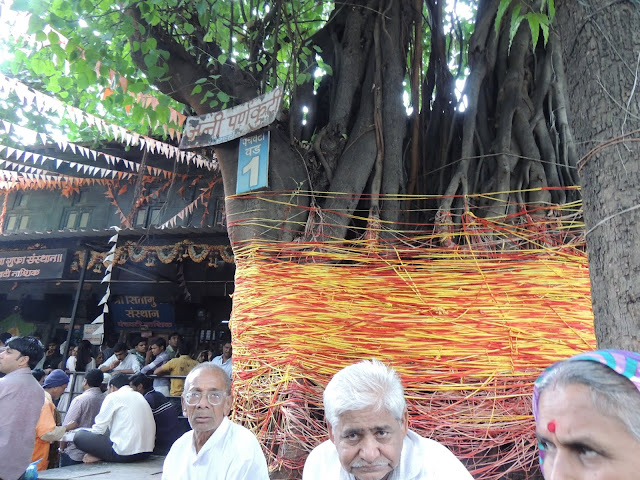 The whole area must have been a thick forest at the time the events of the Ramayana took place, so it is difficult to imagine the exact place that Rama’s ashram existed. However, the ring of five trees is described in many versions of the epic, so this is believed to be the general area of the ashram. Located here today is one of the most famous temples in Nashik – the Kala Ram Temple. 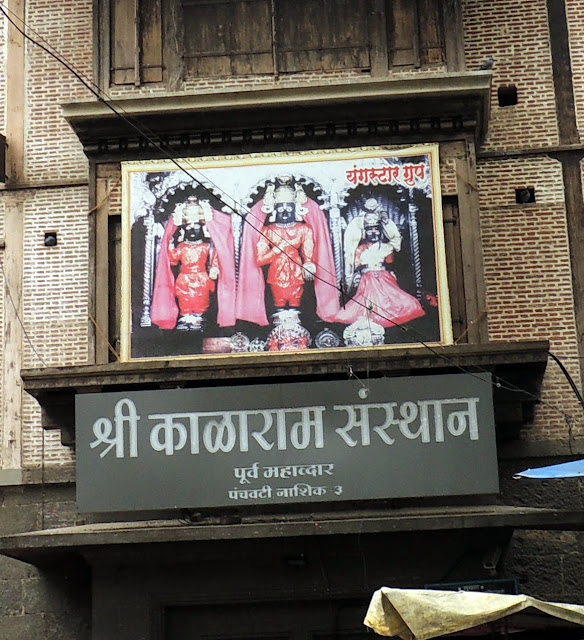 The name of the temple derives from the black stone statue of Lord Ram in the sanctum. Considering that most idols in northern India are made of marble, this itself is an oddity and an interesting thing about this temple. While the site of the temple is an ancient one, the present structure was built by the Peshwas, about 200 years ago. 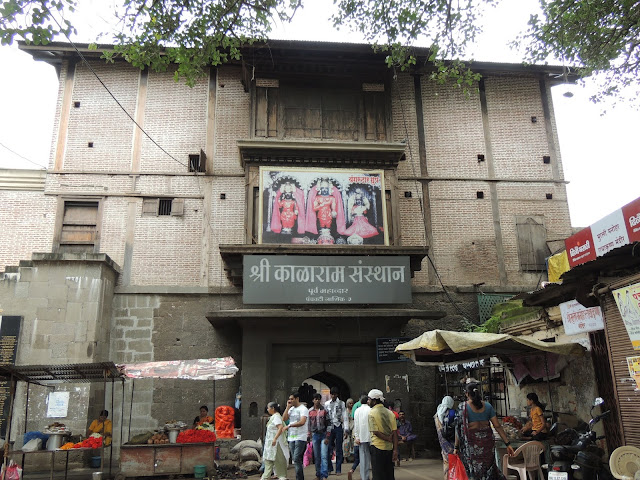 Very near this temple is the Sita Gumpha, or Sita’s cave. It is believed that Sita was hidden here for a while when Rama and Lakshmana went in search of the golden deer. 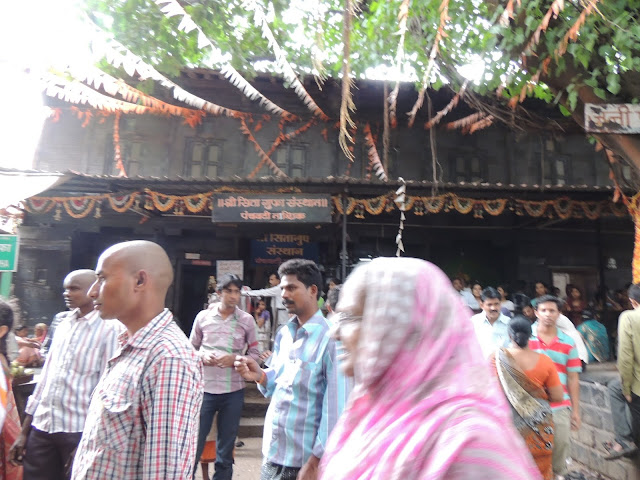 A little further on, we come to a bridge. It is apparently called the Lakshman Bridge, and is believed to be the site of the legendary ‘Lakshman Rekha’ or the line that Lakshmana had drawn to protect Sita. 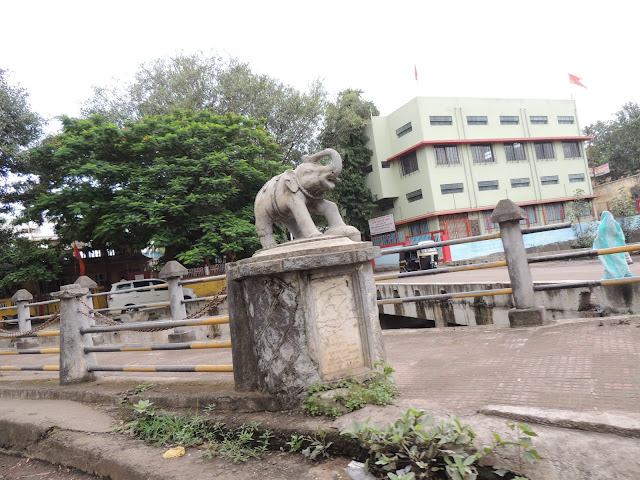 To justify the belief, there is also a small shrine just next to the bridge. Here is a small idol of Sita, and just outside, a small figure of Ravana! 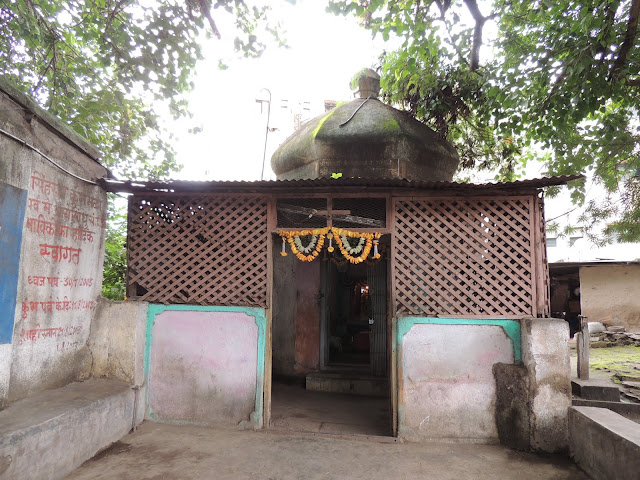 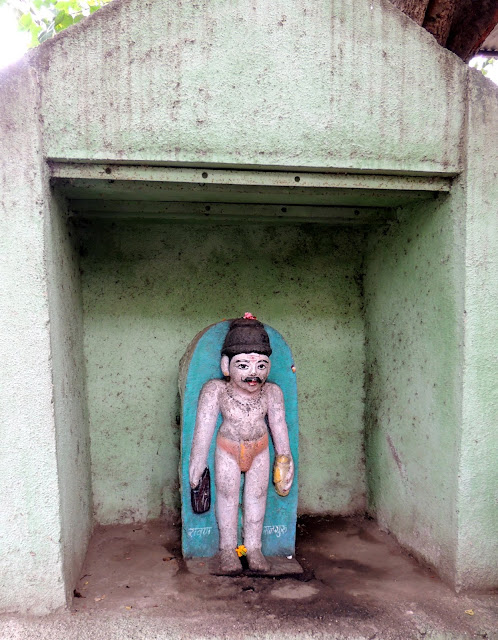 Further down the same road, we leave the hustle and bustle of the city behind, and enter Tapovan. In Sanskrit, the word means ‘place for meditation’, and that is what it must have been, at one time. Located on the banks of the Godavari, the rocks smoothened by the river over centuries, it is easy to imagine the serene and peaceful spot it must have once been.

Today, however, it is a crowded tourist place, which has been robbed of its charm by hordes of pilgrims. We are shown a house which is also said to be Rama’a ashram... 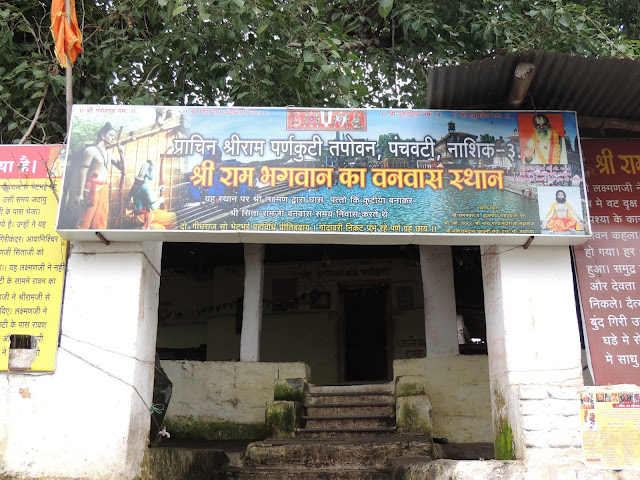 And a temple which has been built for Lakshmana, lauding his act of disfiguring Surpanakha. 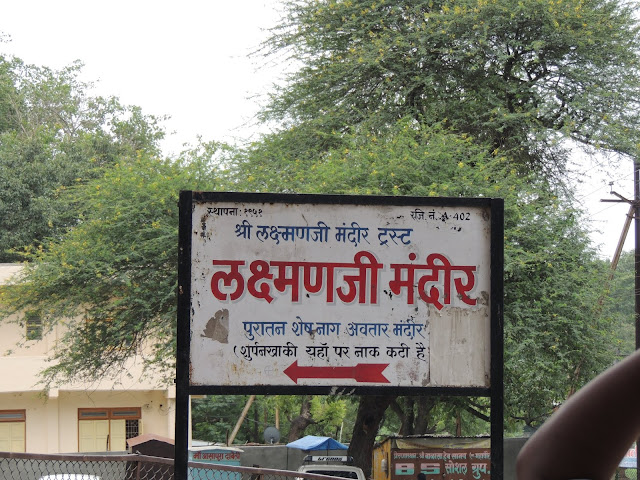 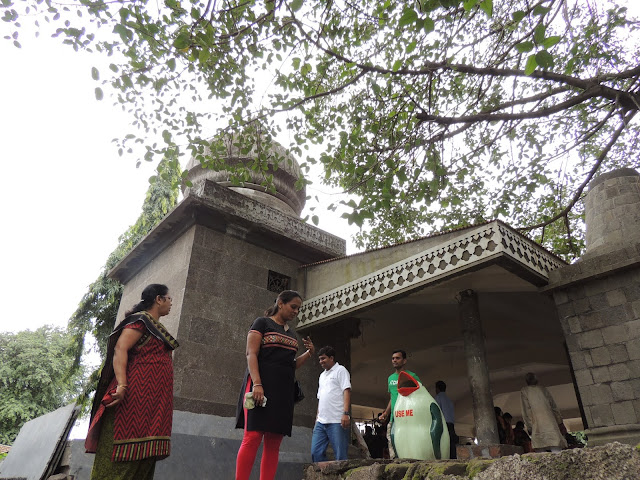 An ancient banyan tree is the highlight of the place. I wonder how long it has stood there... and if it has indeed witnessed the events of the epic.... 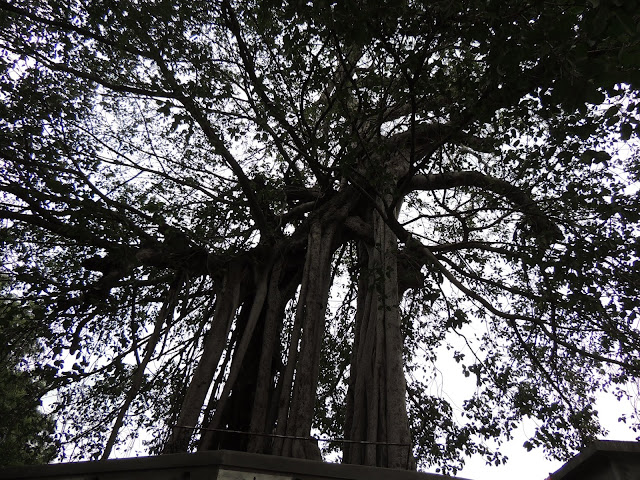 The river itself is almost dry, even though the monsoon has still not ended. 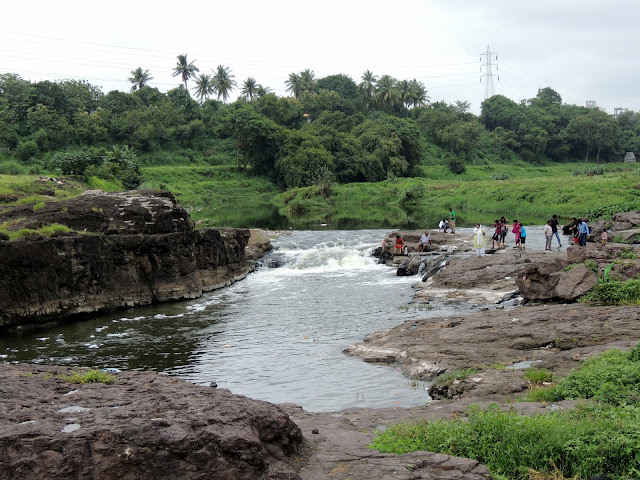 There are idols all over the place... small holes in the boulders widened to resemble pits.... water stagnating everywhere... 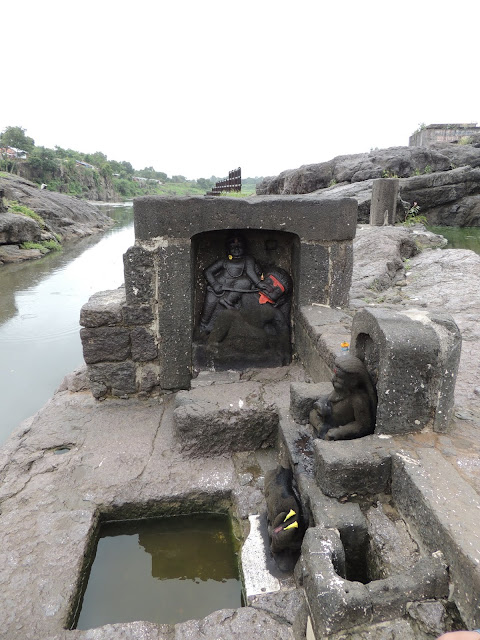 Figures representing the disfigurement of Surpanakha.... 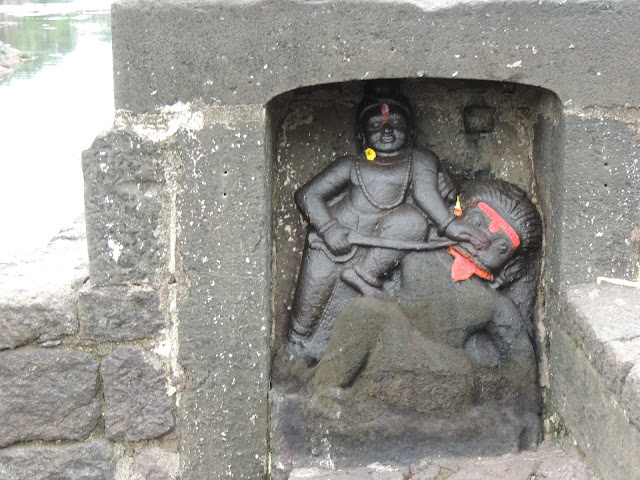 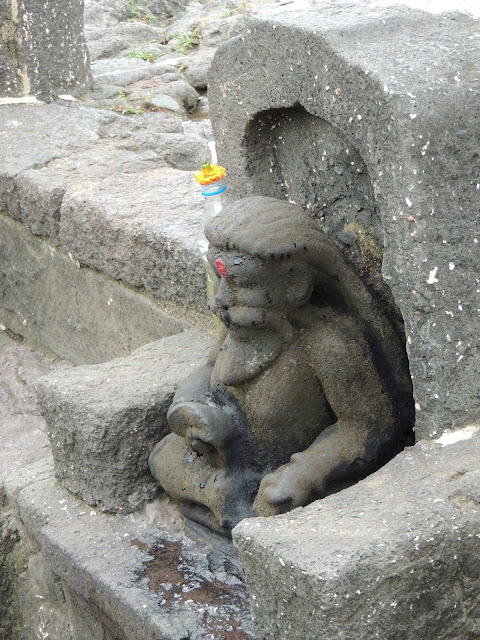 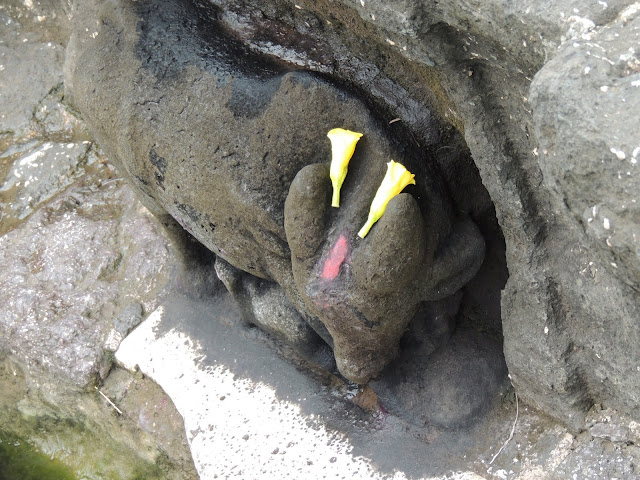 Even one of Sita with her two sons!! Wonder where they came from! 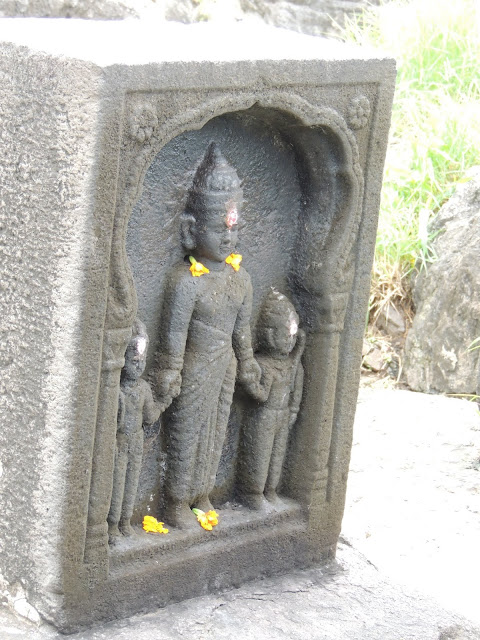 A priest approaches me eagerly, promising to say prayers to Rama and Lakshmana at the site they performed sacrifices. I wave him away, and he goes off to pester a family who have just arrived. They accept, and he helps them down the smooth boulders, pointing out the holes in the rock as proof of Rama and Lakshmana’s yagnas. Samhith is eagerly listening to the story, and I remind him of the potholes we had seen at Nighoj. A teenager with the family group looks at me, and the priest calls him back to pay attention, shooting me an angry glance. I am no longer irritated..... just amused, that we cannot appreciate nature as she is... we need a reason... a story... and not just any story... a story related to our gods, and a temple to pay our respects at. 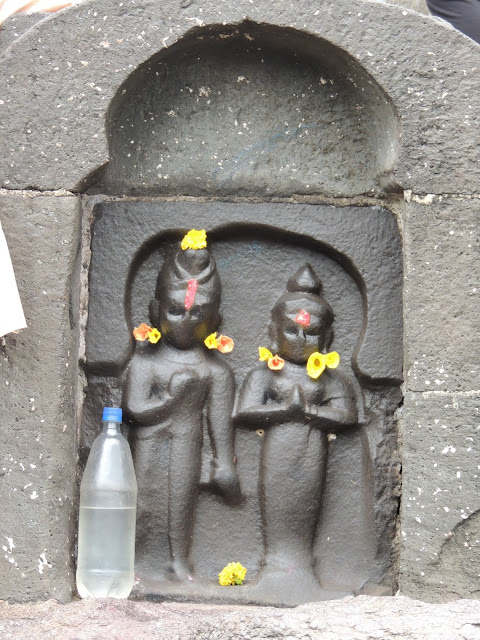 Turning back, I see the huge figures of Rama Lakshmana and Sita on a nearby hill.... they were installed there during the last Kumbh Mela... and I wonder... did Rama step there too during his sojourn here? 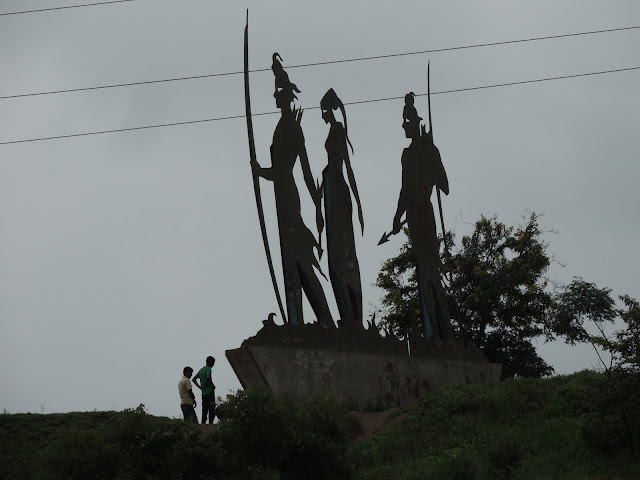 Nashik is located about 165 Km from Mumbai.