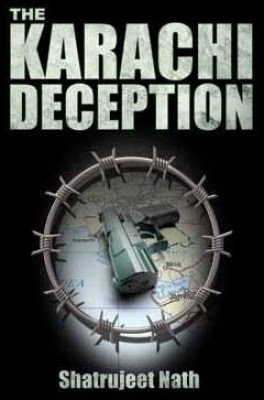 Thrillers, especially spy thrillers hold a special fascination for me. I remember a time when my dreams were filled with me in the role of a spy, braving dangers and deception to serve my country. That, of course, was a long time ago. With the passage of time, the fascination for thrillers never quite passed, but as I discovered other genres, the enthusiasm lessened, though I still pick up the occasional thriller, mostly for the thrill of the adrenaline rush I get without having to move from my chair!

When I was asked to review ‘The Karachi Deception’, I hesitated, for two reasons – firstly, I had never reviewed a thriller, and secondly, I had no great opinion of emerging Indian authors.

If there were two things that dissuaded me, there were two that persuaded – first, the book was recommended by Reshmy Pillai of The Tales Pensieve, a website I had often read and liked. Second, and more importantly, the author, Shatrujeet Nath, had a writing background. He was an Assistant Editor at the Economic Times before he quit his job to write fiction. ‘Surely someone with a background like that could write an interesting novel” was my only thought, as I took it on.

Now, for the review, let me begin with my first impressions....

The cover is eye catching – the barbed wire and gun over a map of the India-Pakistan border, with dots representing the cities of Karachi and Bhuj visible clearly on either side – aptly depicts the tension between the two countries, which is what the book is all about.

Shatrujeet Nath chooses to write on a topic which recurs often in conversation – Mumbai’s dreaded underworld don hiding in Pakistan and choreographing terror attacks all over India. His plot revolves around the Indian Army’s attempt to assassinate him, and the web of lies and deception which surround the entire project. It is impossible not to draw parallels between the story and reality, and the author’s biggest success lies in the way he has dealt with the situation, making even fictional events seem realistic, and at times, plausible.

The book begins with a prologue, set in Mali, and an unsuccessful assassination attempt. Reading it, I wondered if the prologue would set the tone for the book in typical Indian film style, with events taking place across the globe. However, my fears were unfounded, as with the very beginning of the first section, the author showed himself and his roots, with a clear understanding of India and the subcontinent. This understanding shines through, whether in the part where Imtiaz’s bus is stopped by the police, or in the internal workings of the bureaucracy, where linguistic and regional connections work better and faster than the conventional channels.

Apart from his understanding of the Indian psyche, he also seems to have a good working understanding of how things work in official channels, especially with regard to military and political matters. Whether the knowledge stems from his experience in the newspaper industry or simply good research work, he seems to have done a wonderful job in putting together an engaging narrative, which has us hooked through the adventures of the lead trio.

The language is excellent – simple, but effective. The author’s experience as an editor shows, especially in the descriptions of places and people, utilising the least number of words, but nevertheless just as picturesque as an elaborate paragraph!

The book is fast paced, as befits a thriller, and the plot is well thought, though in my opinion, the twist in the end could have been better worked out. However, the narrative holds itself, as well as our attention, to the very end, just as a thriller should.

The characters are well sketched, but only as far as their roles in the story are concerned. We learn nothing of them as people, of their families or their likes and dislikes, or what makes them tick. That, to me, was the only negative point about the book. The same goes for the central character, the don, Irshad Dilawar, who only makes a brief appearance. What does he think of the situation? I would have loved to have a bit more of him too.

In conclusion, I can only say that Shatrujeet Nath brings us a spy thriller so close to home, it is a pleasure to read. An excellent first book.