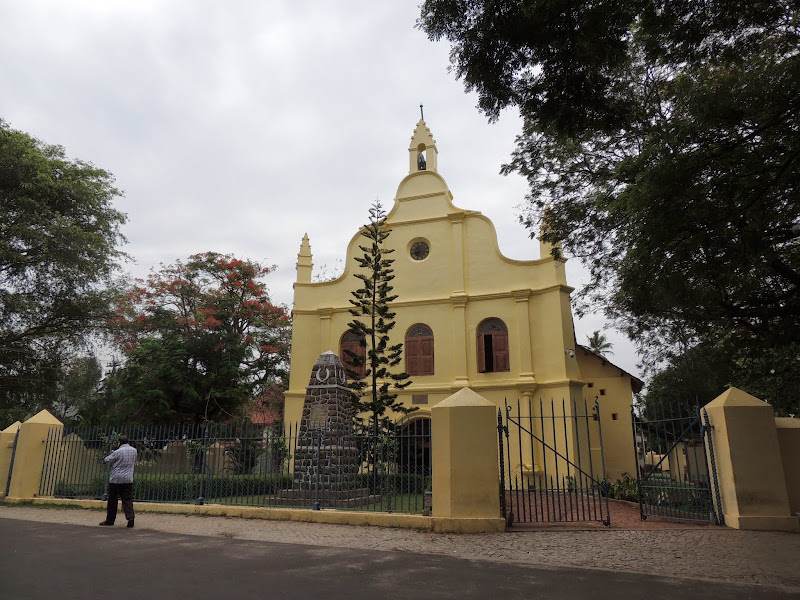 A busload of tourists filled the church. While few knelt to pray, most just sat and looked around, and almost everyone clicked photos from their camera/phone.


The voluble guide stood as close as possible to the altar, and as he spoke, his followers hung on to his every word, clicking enthusiastically at whatever he pointed. I smiled, rather irreverently reminded of the faithful flock following the messiah, as the guide led them to a corner of the church, and they elbowed each other, trying to get a better view. I wandered around the church as the group finished seeing all there was to see, and only then made my way to see the one slab of stone that had brought so many people (including us) all the way to this corner of Kerala…. 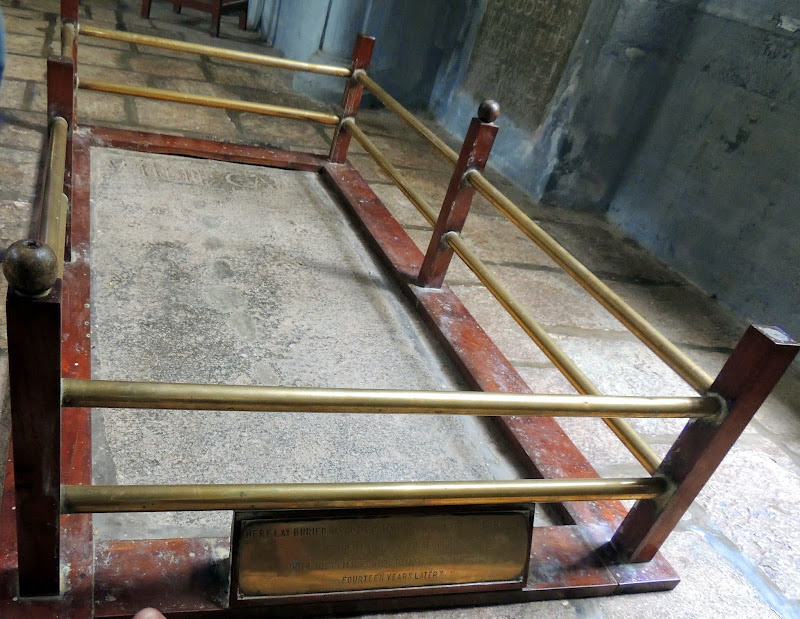 The stone is now weathered and the writing is no longer legible. Besides, the spot it marks no longer holds the remains which were once interred here. And yet, this stone is one of the biggest attractions of Fort Kochi. After all, it marks the place where Vasco Da Gama was laid to rest! 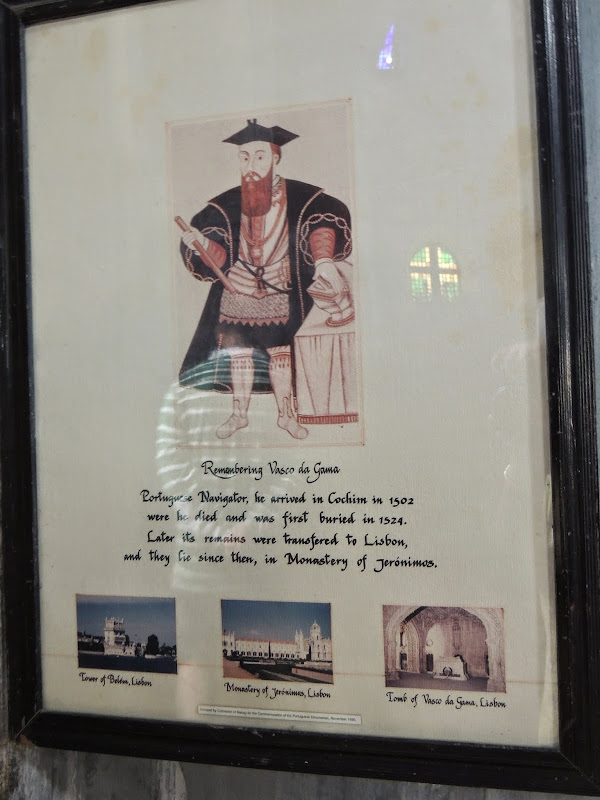 Vasco Da Gama was on his third visit to India, when he contracted malaria, and passed away on Christmas Eve, 1524. He was interred in this church, and here he rested in peace for 16 years, before his remains were shipped to Portugal in 1539. 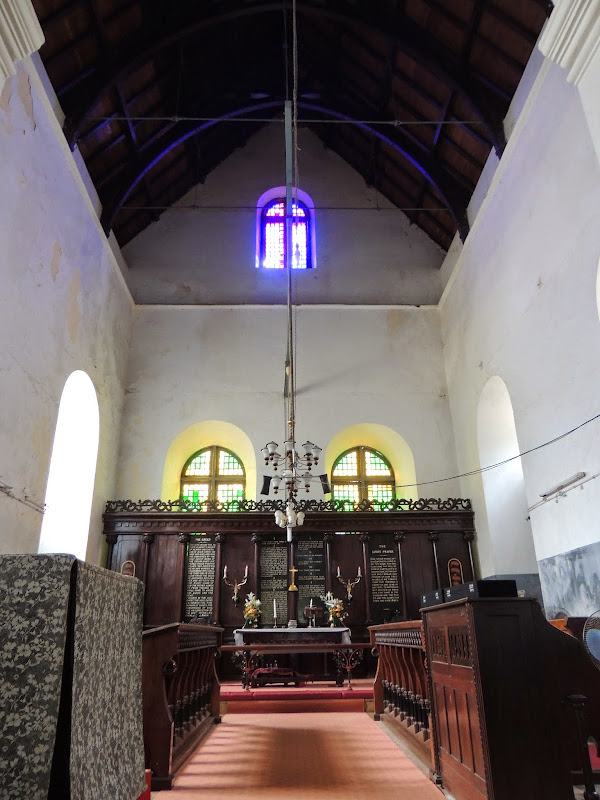 The St. Francis Church, as it is known today, is most popular for its connection to Vasco Da Gama, the one who showed Europe the sea route to India, and changed history forever. However, its main claim to fame is as the first church built by Europeans in India. Yes, there were churches built here before this. St. Thomas the Apostle had arrived in Cranganore centuries before, and there were already Christians here when the Portuguese missionaries arrived. However, the Portuguese brought with them a more modern (read European) version of Christianity, in keeping with the times, which were well at variance with the religion followed by the Christians here. Due credit must therefore be given to the ruler of Cochin, who not only welcomed the Portuguese, but also allowed them to build their own churches here. I can only admire the extent of true secularity followed by our rulers then! Of course, they weren’t without their share of troubles, but this post is about the church, not religious issues! 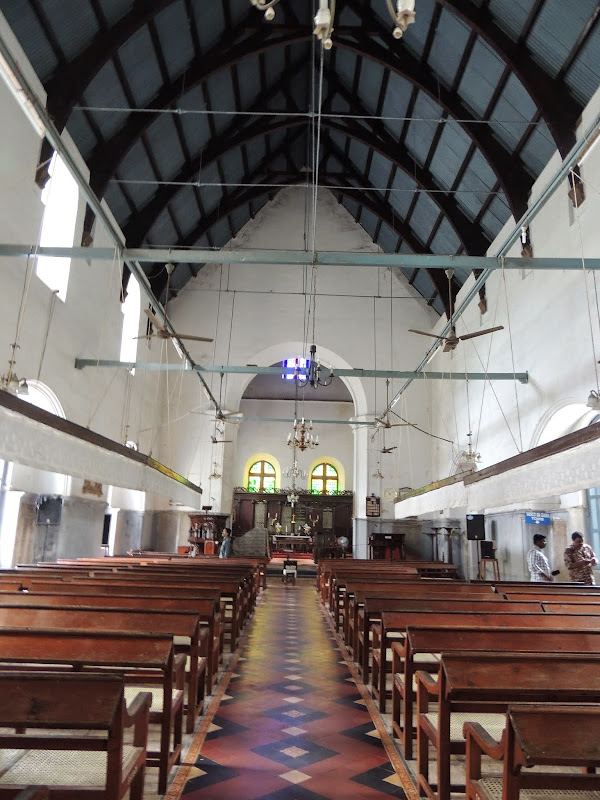 Coming back to the Church, it was first built of wood in 1503, and dedicated to the Saint Bartholomew. A permanent structure with bricks and mortar was built by the Franciscans in 1516, and the church dedicated to Saint Anthony. In 1663, the Dutch captured Cochin, and converted it to a Protestant church, relieving it of most of its treasures. Over a century later, it passed into the hands of the Anglicans with the arrival of the British, finally settling down to be known as the St. Francis Church. 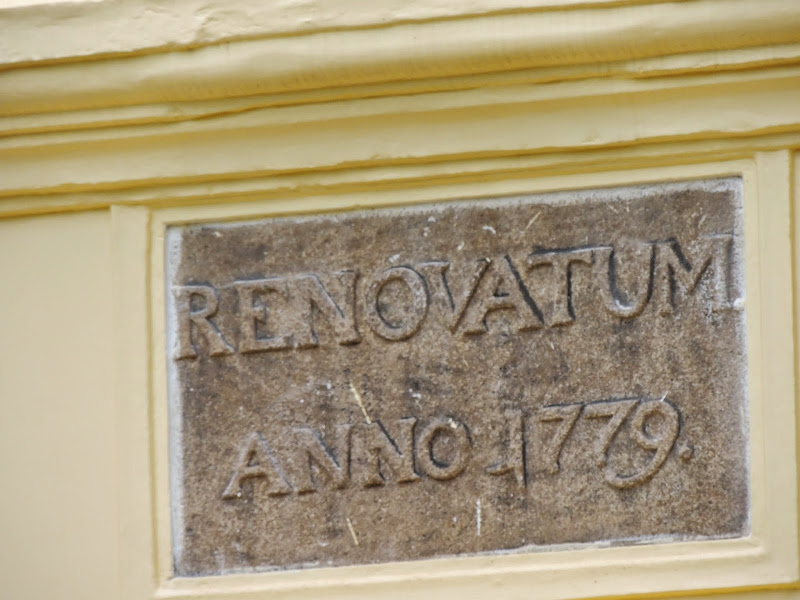 The present structure dates back to the times of the Dutch, since a tablet over the west door mentions a renovation in 1779. However, the interior is almost completely from British times, and the ‘pankhas’ or fans, erected over the pews show us a glimpse of the opulence of that era. 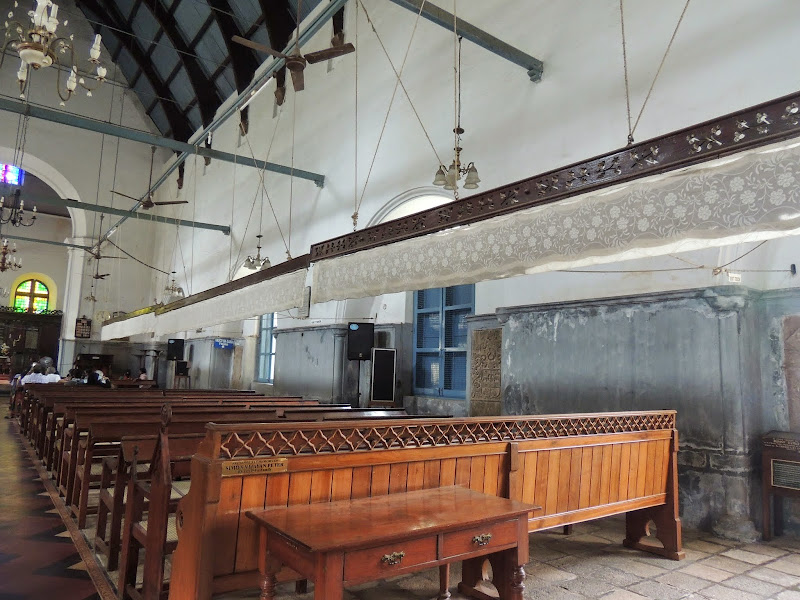 All over the walls are memorial stones, which have been transplanted from their original locations in and around the church at various times.

These are an interesting recording of history, ranging from Portuguese to Dutch names and family coats of arms, which I found rather fascinating.

Interestingly, the church records go back to 1795, to the arrival of the British. A little farther off is the Dutch cemetery, which is also maintained by the church. There are over a hundred tombs here, of both, the Dutch as well as British. Entry is restricted, since the cemetery is mostly kept locked. However, it provides quite an interesting rendering of the Dutch and British history of the region. 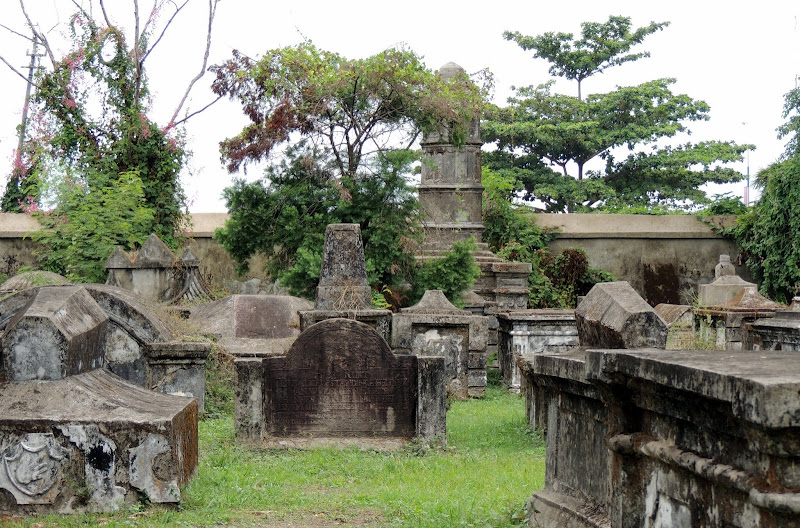 Outside the church is one of the more recent memorials – a cenotaph erected in 1920 in memory of the residents of Cochin who lost their lives in the First World War. 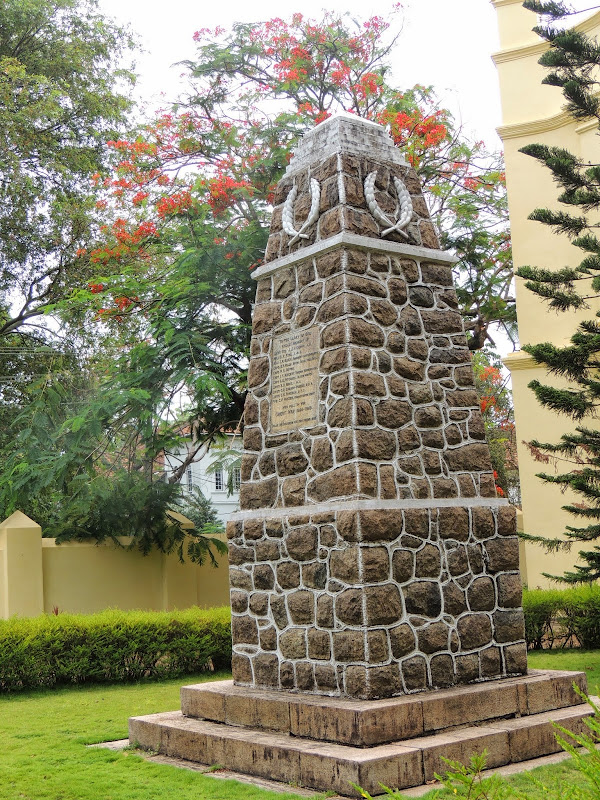 From the Portuguese reign to the Dutch Invasion, from the East India Company to British rule, WWI and  Independence, St.Francis Church has seen it all over the centuries. It is apt indeed that the memory of Vasco Da Gama lingers on, in this, the oldest of churches, in the land he opened up to the world, and changed the course of history!