July 28, 2014
On the outside, it is a grand, Gothic structure, resplendent in its whiteness. 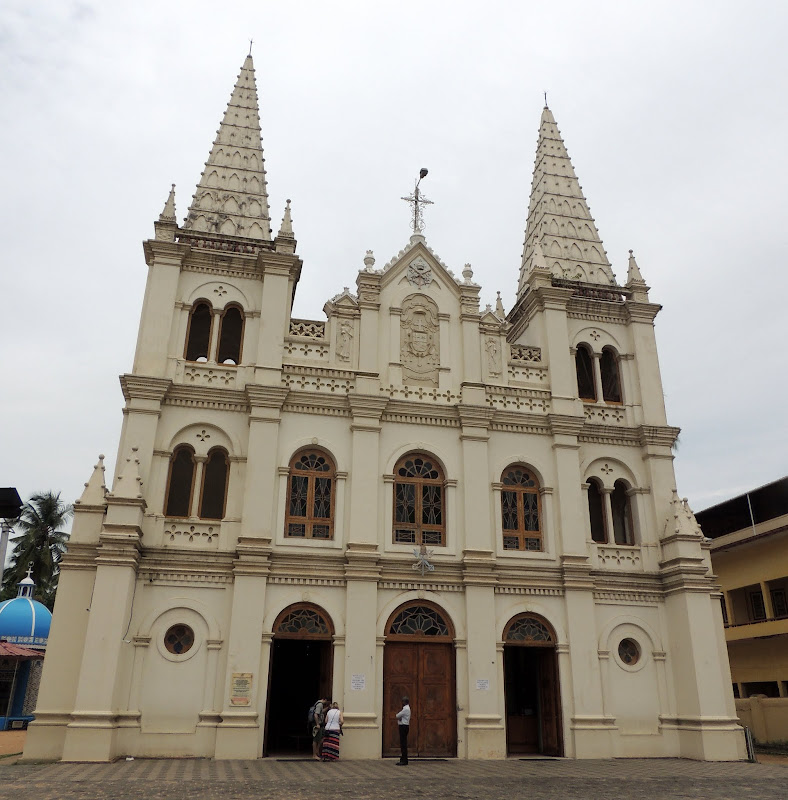 Inside, it is vibrant and colourful, every inch of space filled with Christian art. 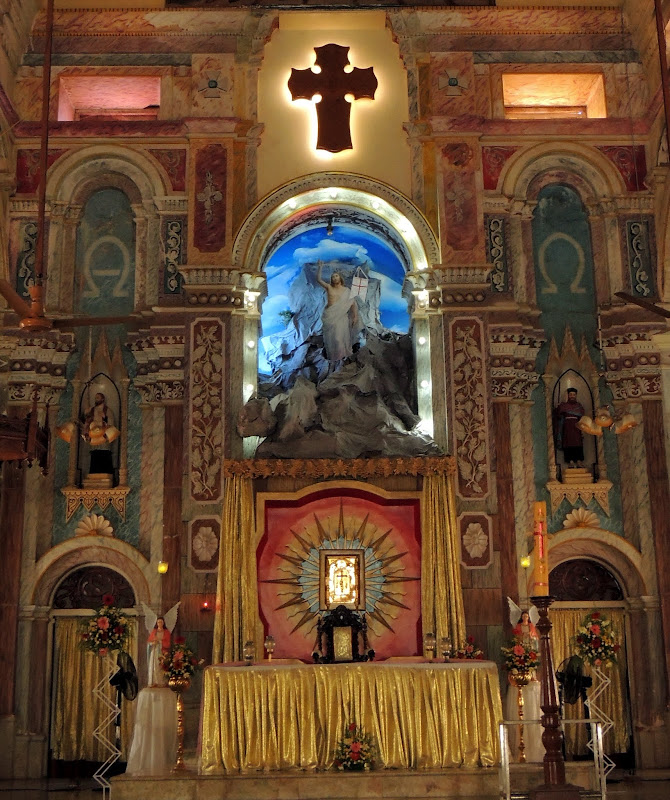 This is the Santa Cruz Cathedral Basilica in Fort Kochi, first built by the Portuguese in 1505. This was one of the only two churches left standing by the Dutch, when they captured Kochi. The other was the St. Francis Church, which I have already written about. However, while the St. Francis Church continued to function as a place of worship, through Dutch and British rule, this one was used as an armory by the Dutch, and eventually demolished, by the British. It was finally rebuilt in 1887 during British rule, grander and more beautiful than ever, and consecrated in 1905. 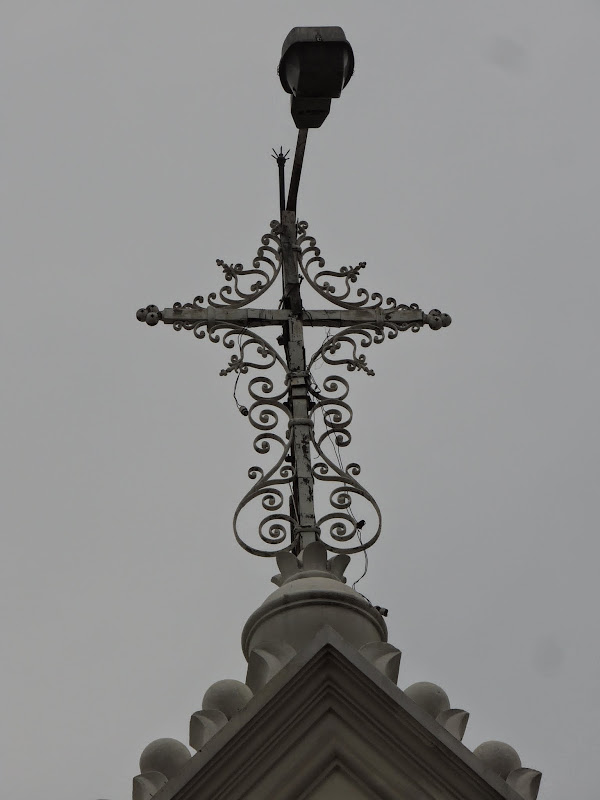 It is evident that the British intended this to be an impressive structure, both from the outside and the inside, befitting its status as a Cathedral. The exterior might be whitewashed, and appear plain, but a closer look reveals intricate details proclaiming its importance. 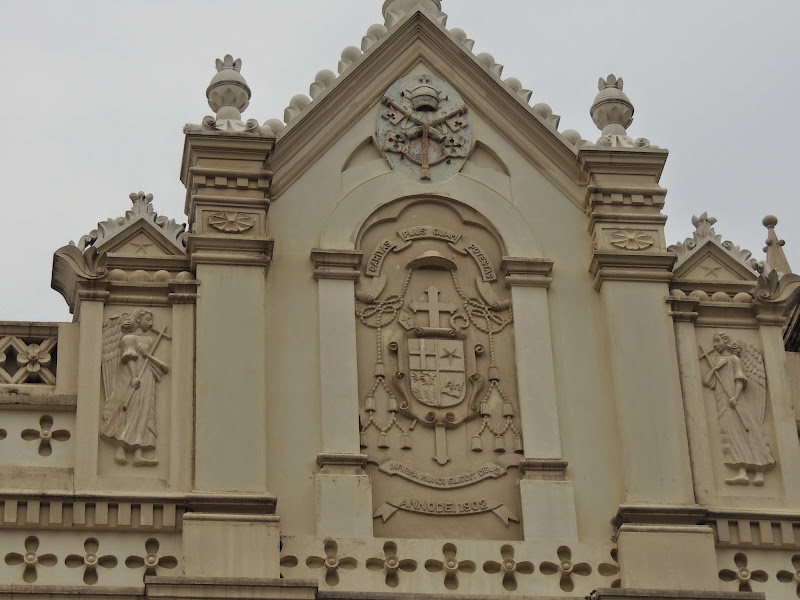 It is however, on the inside that the cathedral really shows its artistic side. Every inch of space is covered with art, making this one of the most vibrant churches I have ever seen! From pastel shades on the walls and ceiling, to the bright blue and white of the cast iron pillars and the simple, but bright stained glass, the interior was a stark contrast to the muted exterior, as if making up for the complete whiteness of the outside! 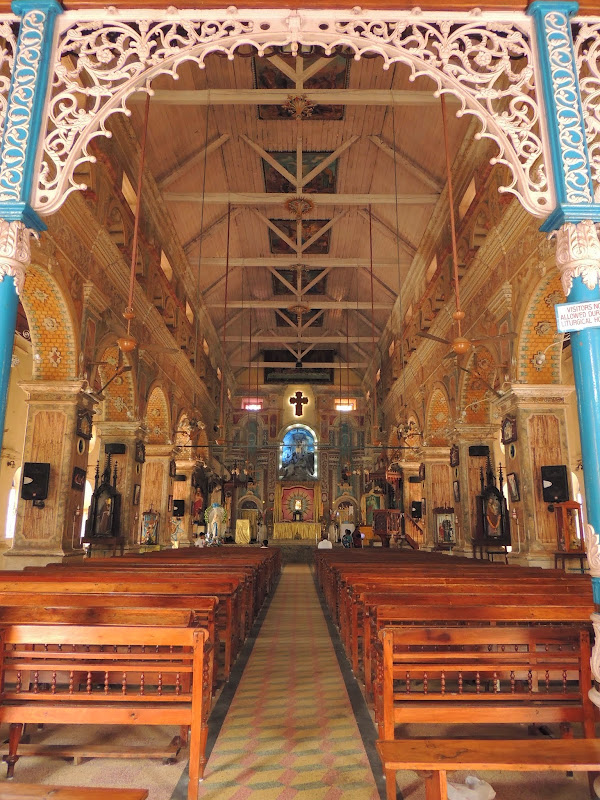 The art here is the work of Antonio Moscheni, a Jesuit brother and painter, best known for his frescoes at the Church of the St. Aloysius College in Mangalore. Interestingly, among the churches he worked on is the Holy Name Cathedral in Mumbai, a church I visited recently. It was only when I read this bit of information that I realized why the church looked strangely familiar, though I was visiting it for the first time. Undoubtedly, I was unconsciously recognizing the similarity to the Holy Name Cathedral!! Unfortunately, though Moscheni was responsible for most of the artwork at this cathedral, he did not live to see it appreciated. He passed away just four days before the consecration of the church! What a quirk of fate! 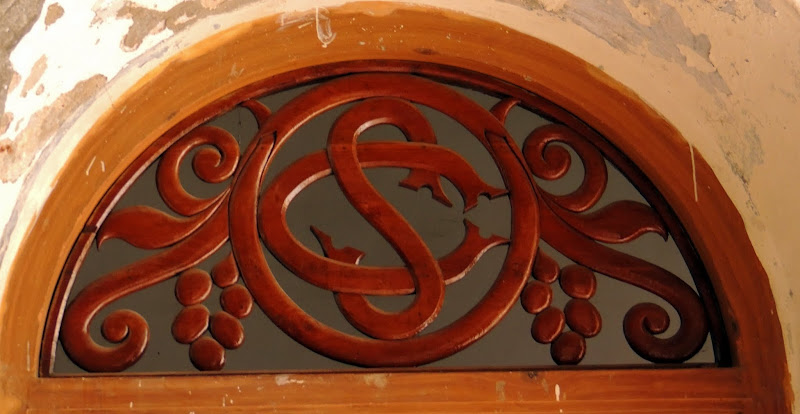 Wandering around the church, I pondered on just how different this one was, to the St. Francis Church, just a few roads away. There, we had encountered crowds of visitors, while here, we were the only ones. A couple of people did enter, but they were worshippers, not tourists. It is quite understandable, considering that this is comparatively a much more recent structure, and therefore less historical and more religious in nature. The sense of history which we experienced at the St. Francis Church was completely lacking here, though in artistic terms, this one was far more fulfilling. 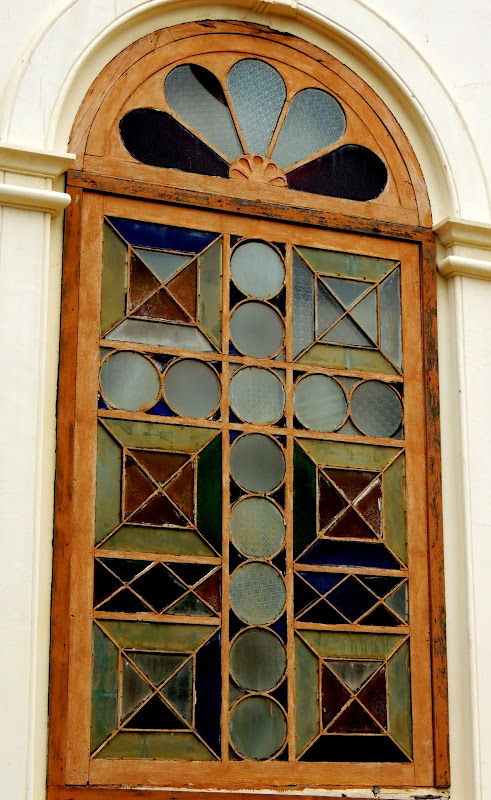 How ironic, that the structure which has been used as a church for over 600 years, should today be known more for its history, than for its sanctity, while, this one, which has been used for worship only for the last century, should be more religious in nature!