January 21, 2015
He is over 8 feet tall, and simply seems to take up all the space! We were, to be honest, rather startled, when we first set eyes on him. The reason though, was not his size, but the fact that he seemed to be made up of faces! Wondering what I am talking about? Here, let me show you…. 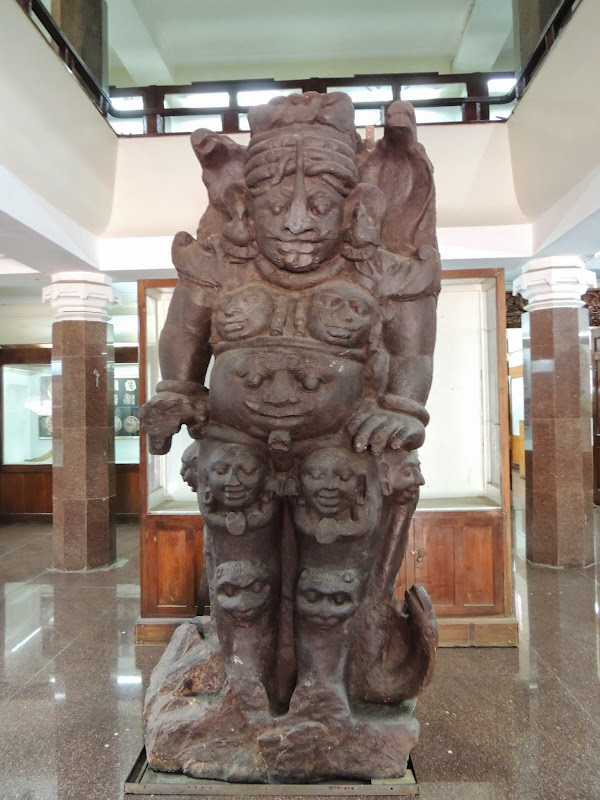 At first glance, he appears grotesque, but he gets more and more interesting as we take a closer look, and realize, that he isn’t just made up of faces. The entire statue is made up of animal and human figures, a thought grotesque in the extreme, but a result surprisingly intricate and awe inspiring…. 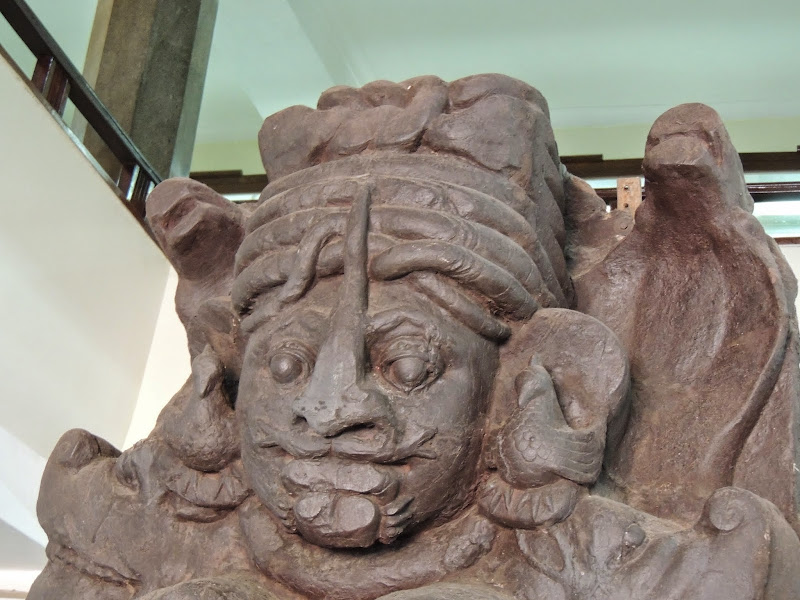 His head has two serpents coiled around, his eyes are frogs, their mouths open, holding eggs as eyeballs. His nose is a lizard, whose legs form his eyebrows; his moustaches are fishes; his mouth is a crab, and his ears are doves!

His neck is another snake, and his shoulder has birds on them, one looks like an owl, while the other seems to have succumbed to weathering. The hands are the legs of elephants, and his fingers, once again, snakes. His chest, stomach, and thighs are all human faces – interestingly, the upper ones seem to be males while the lower are females! His feet and legs are tigers, and yet another snake rises its hood near his feet, as if it formed his cloak!

He is incredibly interesting, but who is he? We were told that he was Rudra Shiva, from the temple of Tala in Chhatisgarh (the figure here is a replica), but he doesn’t seem to be mentioned in the scriptures, at least the ones we know of. It is evident that he is incredibly ancient, and, according to the ASI, he dates back to the 6th century! He is believed to predate Hinduism as we know it, a combination of Aghora and Rudra worship, more common in tribal societies.

This was my first visit to Chhattisgarh, and I travelled to Raipur and Sirpur, to attend the Sirpur Music and Dance festival, on an invite from the Chhattisgarh Tourism Board. There was much I saw and appreciated, but this sculpture - the first one I saw on my visit - is one which has made a lasting impression – and above all, has made me curious about Chhattisgarh and its history. I now have a deep and burning desire to visit Tala and see the original sculpture!

Have you seen anything like this before? If you have, please do write in  and enlighten me!

P.S. For more detailed information, read this post by Saurabh, on Puratattva.in