September 26, 2016
So many shades of green – from the bright green of the leaves to the dull green mixed with brown of the mountains. Even the lake was green, though it was difficult to decide if it was the colour of the water, or simply the reflection. As the setting sun cast its last light of the day on the water, the lake appeared to be a jewel, hidden away in the mountains. We were at Lonar, the site of India’s only meteoric crater lake, and from my vantage point on the balcony of the MTDC resort, as I watched the shades of green grow dark and disappear into the darkness, I wondered if I would be able to climb down the crater and discover some of the mysteries it held.

The talk over dinner revolved around the crater. We were the only guests at the resort, and the owner as well as staff hovered around, telling us of life in this out of the way place. “Hardly any Indian tourists come here. Only foreigners, that too those studying the crater” said our waiter. The owner admonished him “We get lots of Indians during the festivals, especially during the full moon when they come to circumambulate the temples at the base”. “But they aren’t tourists” protested the waiter. “They are pilgrims, who come to worship. Besides, they don’t stay here.” The owner had to agree to that, albeit grudgingly. I changed the topic, asking about how difficult it would be to climb down and do the parikrama, (circumambulation) of the crater. “It’s not at all difficult” he assured me. “You can do it easily”, and he proceeded to arrange for a local boy to accompany us the next morning.

Morning dawned and found us ready to clamber down a path which looked like ones the mountain goats used. Our guide was swift and sure footed, and demonstrated just how easy it was. My son followed him, eager to go see the lake. My husband would have followed them, but I was still wary, and both, husband and guide hid smiles as they waited for me to gather courage and gingerly step on the path, and held out their hands, ready to help. The first step, as usual, was the toughest, and soon, my feet found grips on the rocky path. We spotted the tops of temples as we paused to rest, and the plantations and fields cultivated by the locals as well. The calls of peacocks and other birds were all the sounds we could hear, and still, green was the only colour our eyes could see. 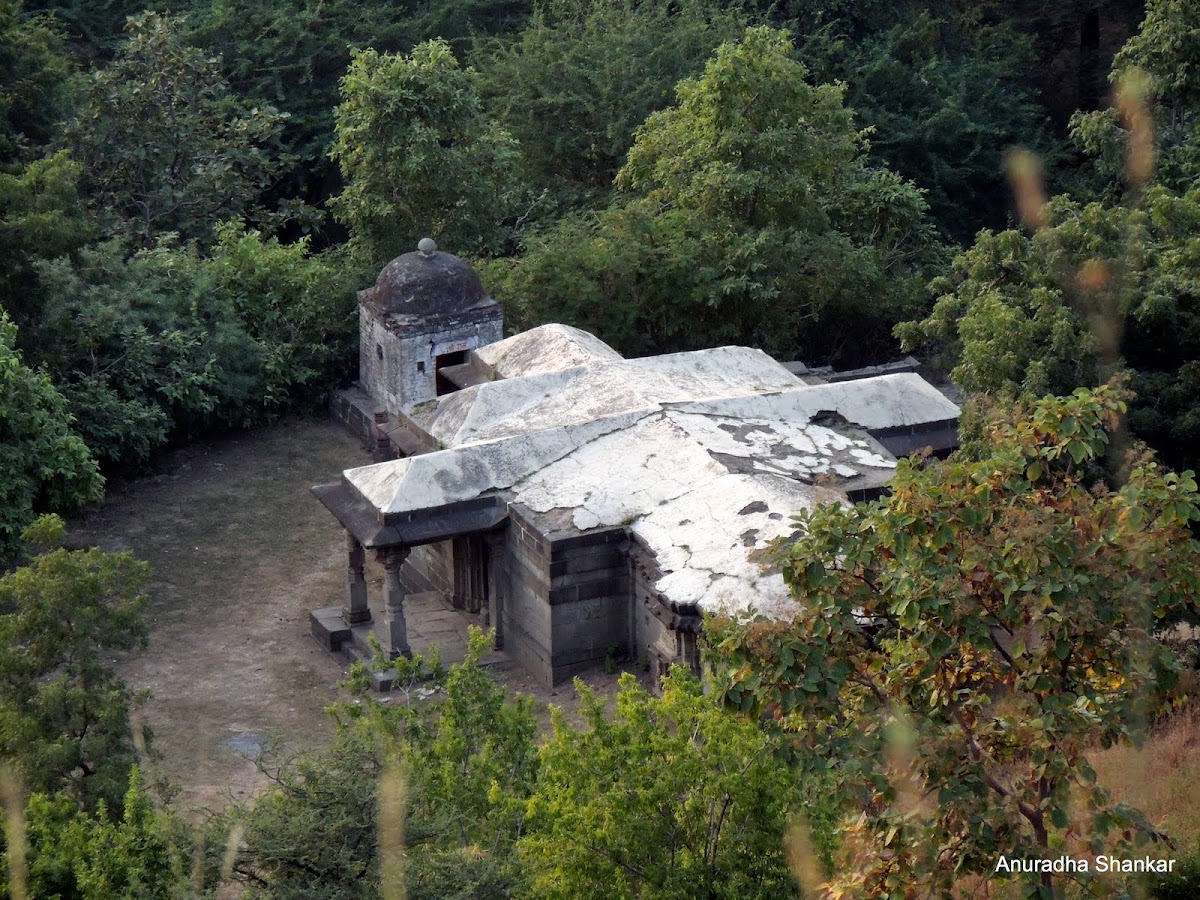 The rocky path led us to a winding one between the trees and plants, growing wild, fed by the mountain springs. Our guide pointed out different flowers and fruits, some of which were familiar, and others, not so familiar, such as the Sivalingi plant, which had round, red fruits, with seeds shaped like the Siva Lingams. “It is a sacred plant, used for many medicinal purposes. It grows here because this a sacred spot, a lake created by the gods!” he told us. 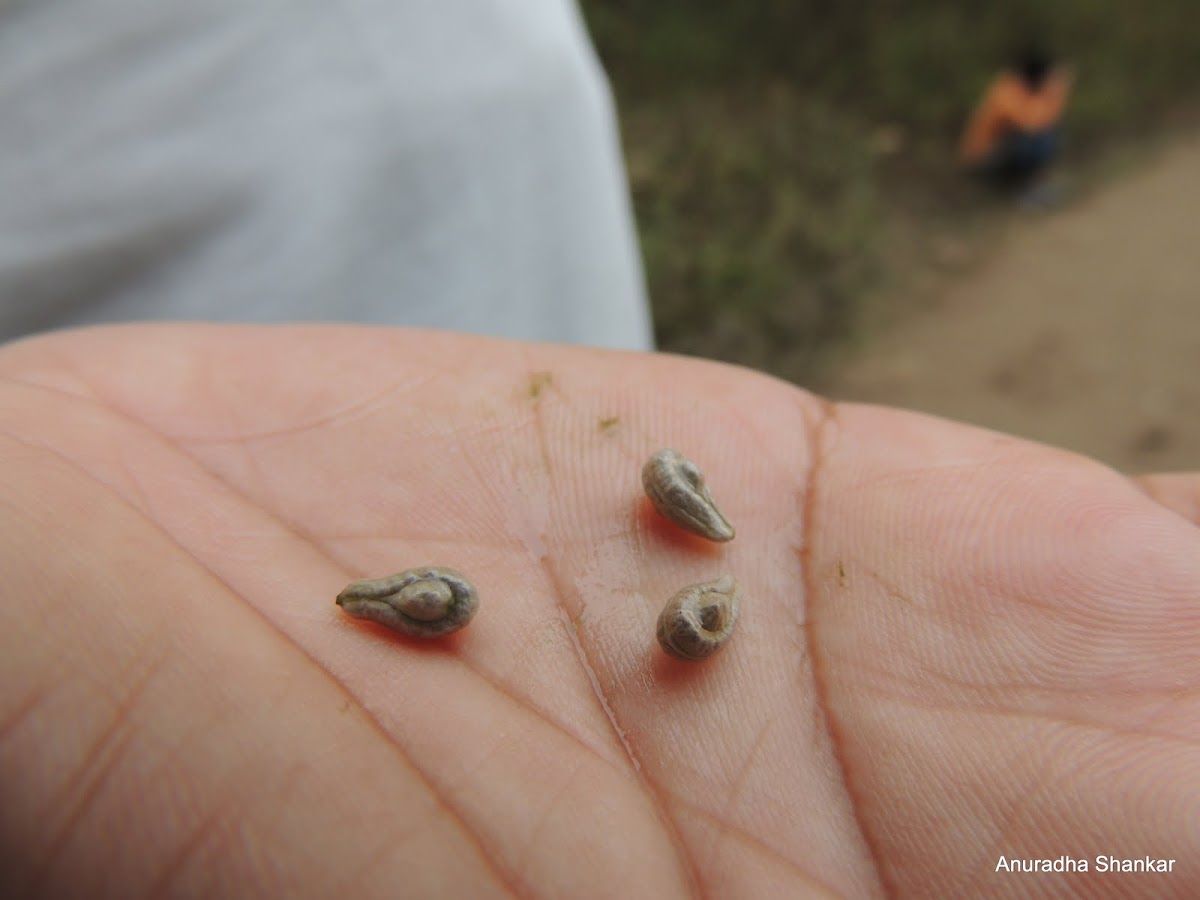 The lake, in legend, was created by the gods when Vishnu pushed the demon Lavanasur deep inside the earth, and his tears filled the space, forming the lake. The lake water is saline, as befits tears of the demon, and both, the demon, and the lake named after him, originate in the local Marathi word for salt – lavan.

Scientifically however, we know that the lake was formed by the impact of a meteor, which fell on earth, over 52,000 years ago. This is the only hypervelocity meteoric crater in basaltic rock, in the world, which brings loads of scientists here, year after year.

Our guide, after telling us of the legends, was eager to demonstrate his scientific temper as well. He was all set with a bit of turmeric wrapped in newspaper and two plastic glasses. Filling one with water from our bottles and one from the lake, he proceeded to show us how the turmeric turned a bright red in the lake water, proving its alkaline nature. I thought back to my school days, wishing I had learnt chemistry like this, on the field! 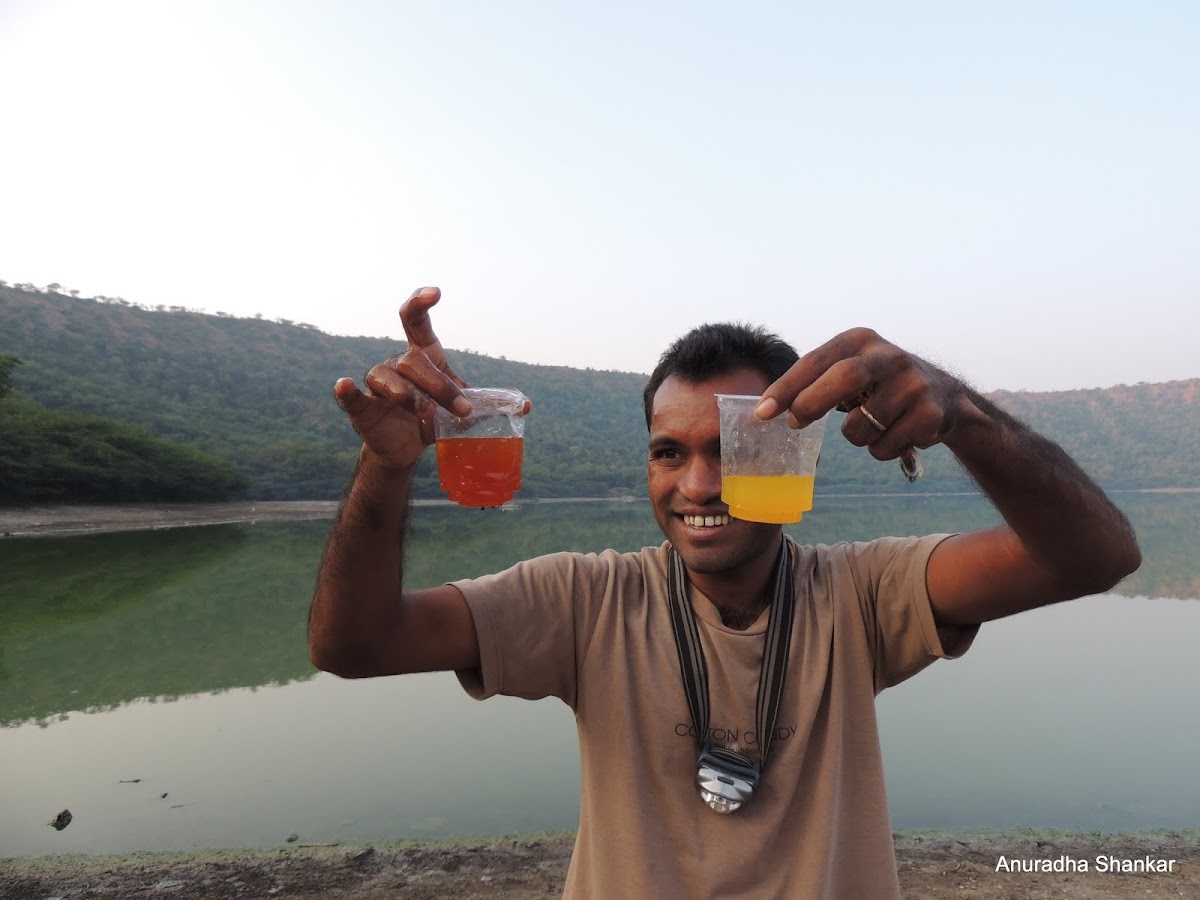 That experiment done, it was time to move on, and explore. There were plenty of water birds around, which went about their life, unaffected by our presence. 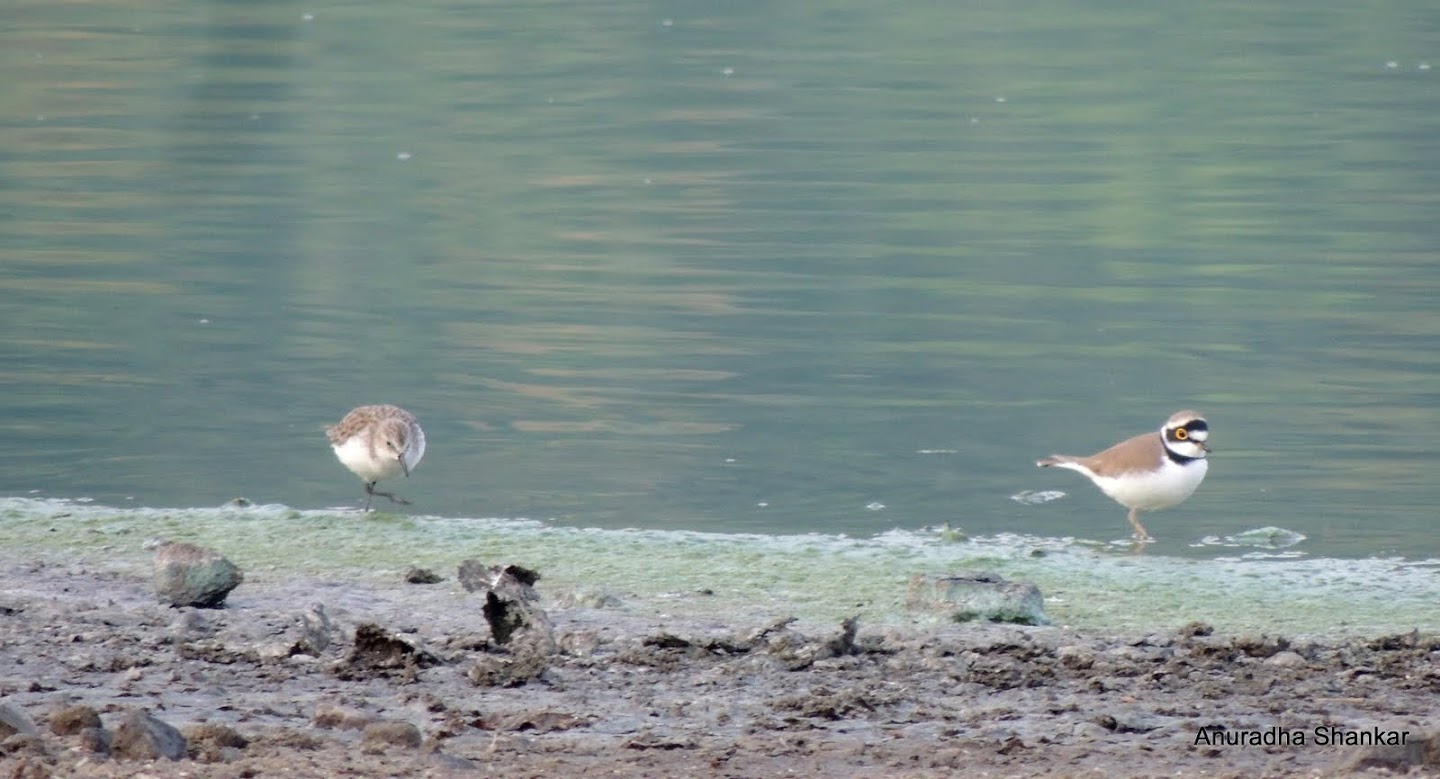 We were, however, more interested in the temples which were dotted along the shore. There are said to be twenty seven temples in the crater, of which only a few stand today. The first temple we came to, which was also the temple we had spied from the path while climbing down, was the Ramgaya temple. Built with a central shrine and an mandapa, it must have been quite an ornate temple in its heyday. Today, a Krishna statue stands in the shrine, a recent addition, and most of the temple is crumbling. 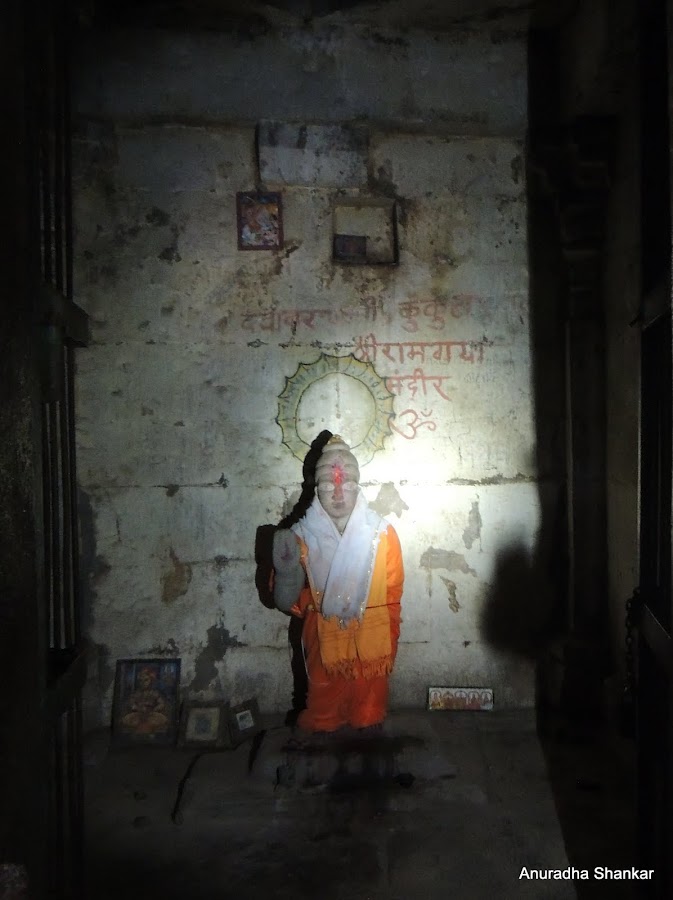 The Kamalaja Devi temple is one of the few temples which has been maintained, and is still in worship here. The temple was visible from the top, as well as from the other side of the lake, and presented a pretty picture against the green background of the hills and the lake, its reflection on the rippling water adding to the picturesqueness. 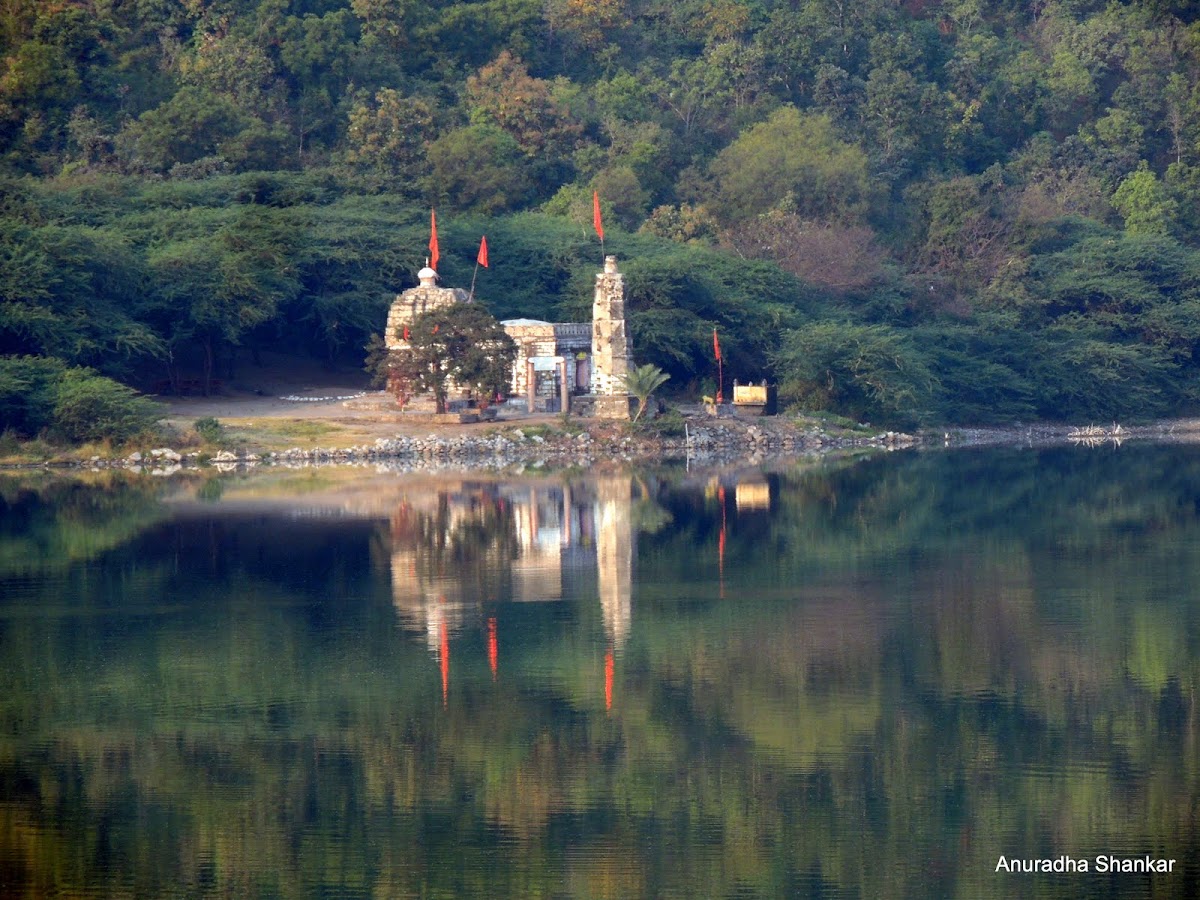 This temple is dedicated to Padmavati, the consort of Lord Vishnu, who created this lake, and whose shrine stands outside the crater, near the village. The well here is said to have fresh water on the side of the temple, and salty water towards the lake! 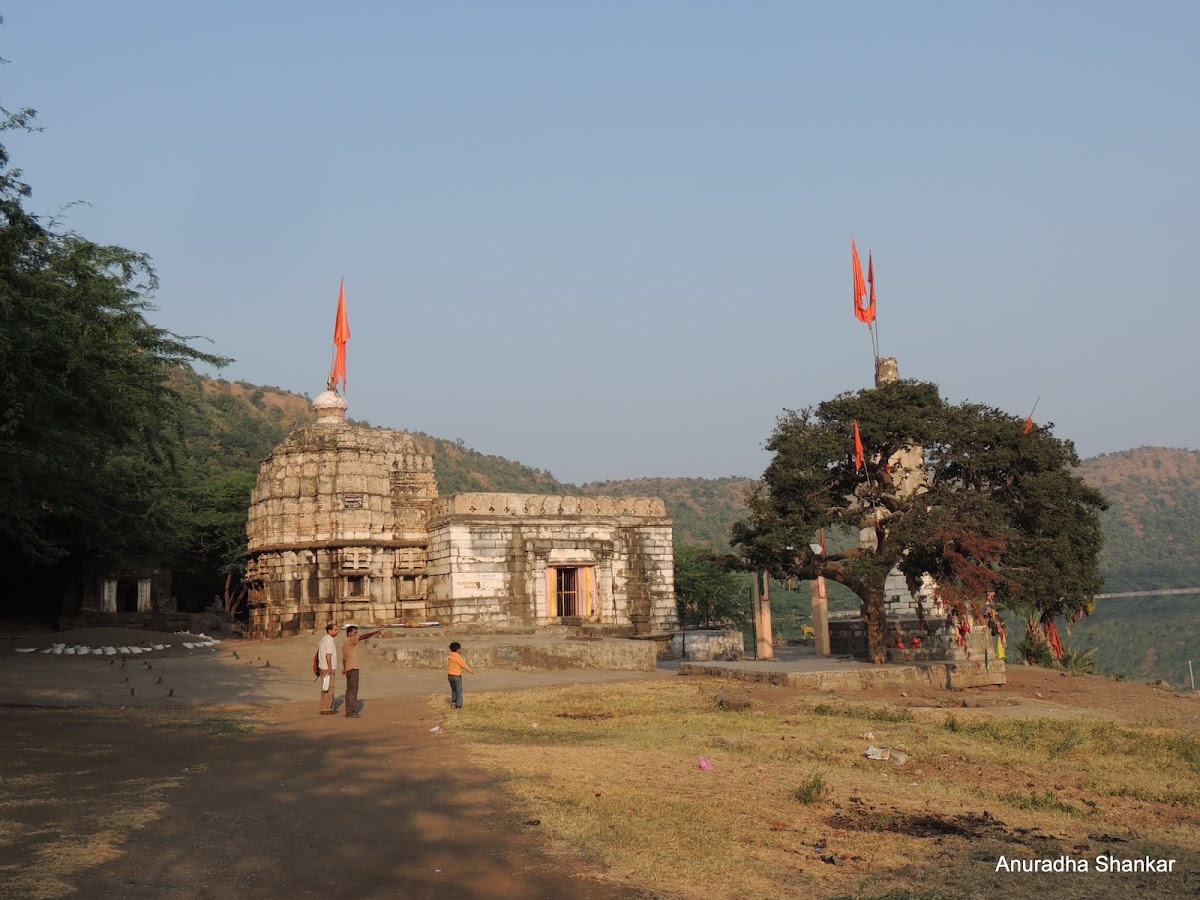 A path ran along the shore of the lake, sometimes passing through the thick bushes and sometimes a dense wood. All along, there were temples, though most were dilapidated, and crumbling. There were carved stones lying around, which probably once graced the pillars and lintels of other shrines. 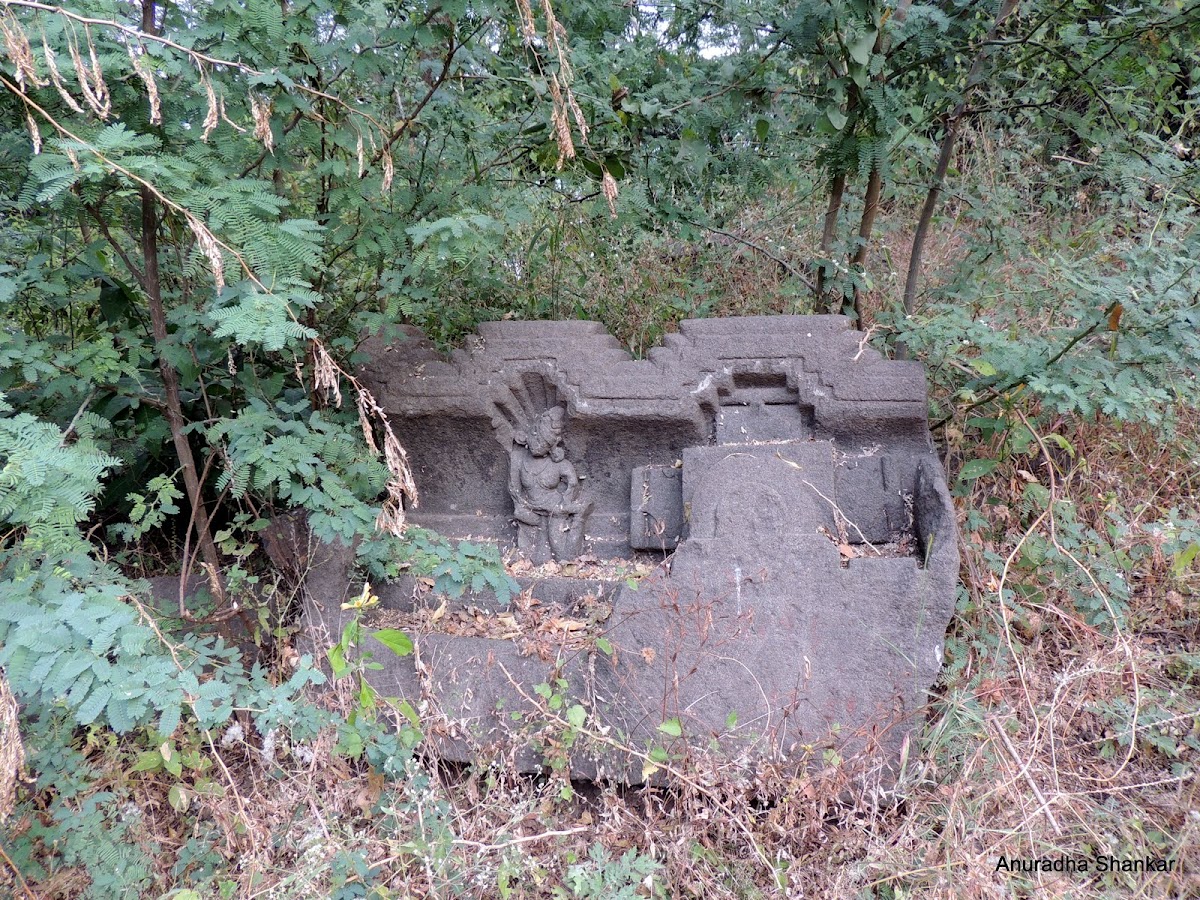 The rough path led us to a better maintained one, and here we found even more temples, in various states of ruin. Two of these were named Yagneshwar and Kumareshwar temples, from the names freshly painted on the old stones, but little remained of their grandeur or their original shrines. 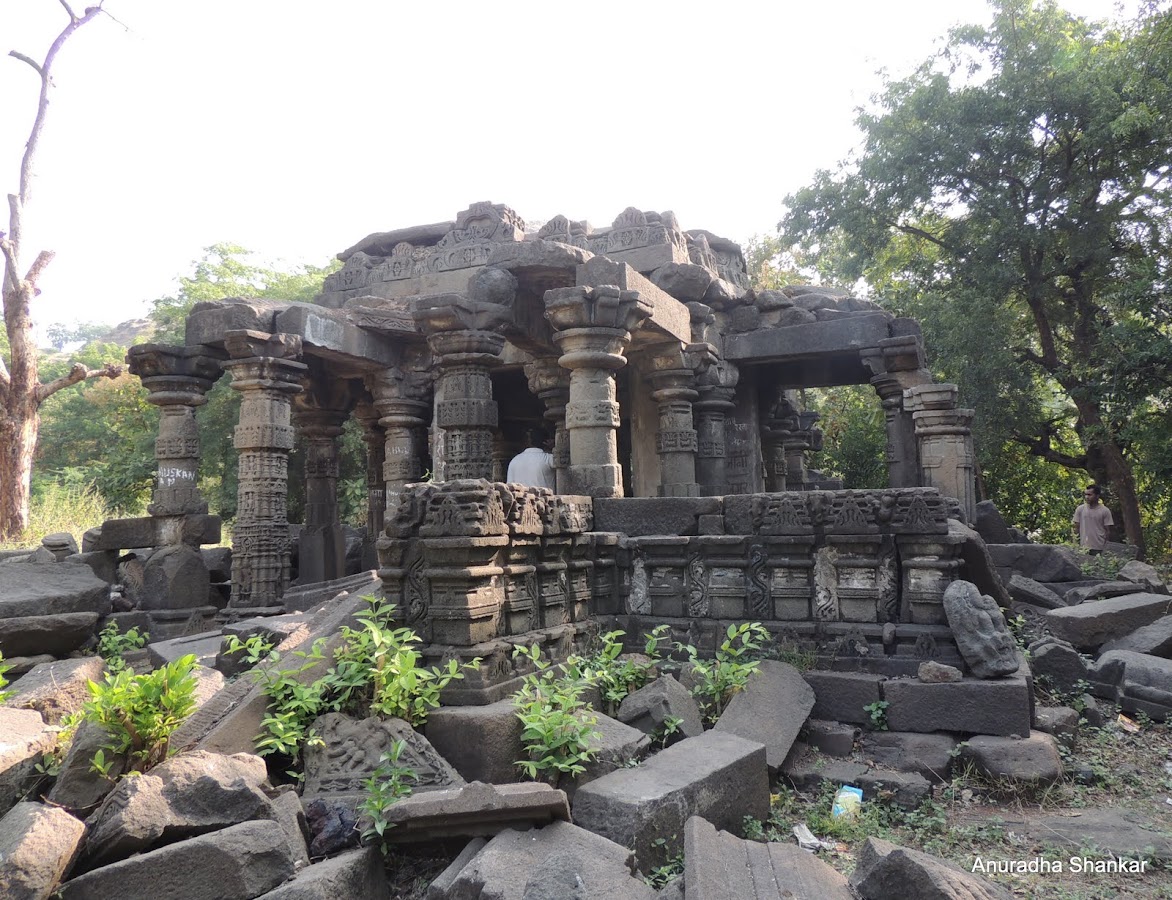 Here, however, the path was new, made of concrete, and also, a lot of people around. Newly built steps led us up the hill, to the Viraj Tirtha, or Gaumukh temple, from which a mountain spring emerges, and flows into the crater, watering all the plants and the creatures which live here. 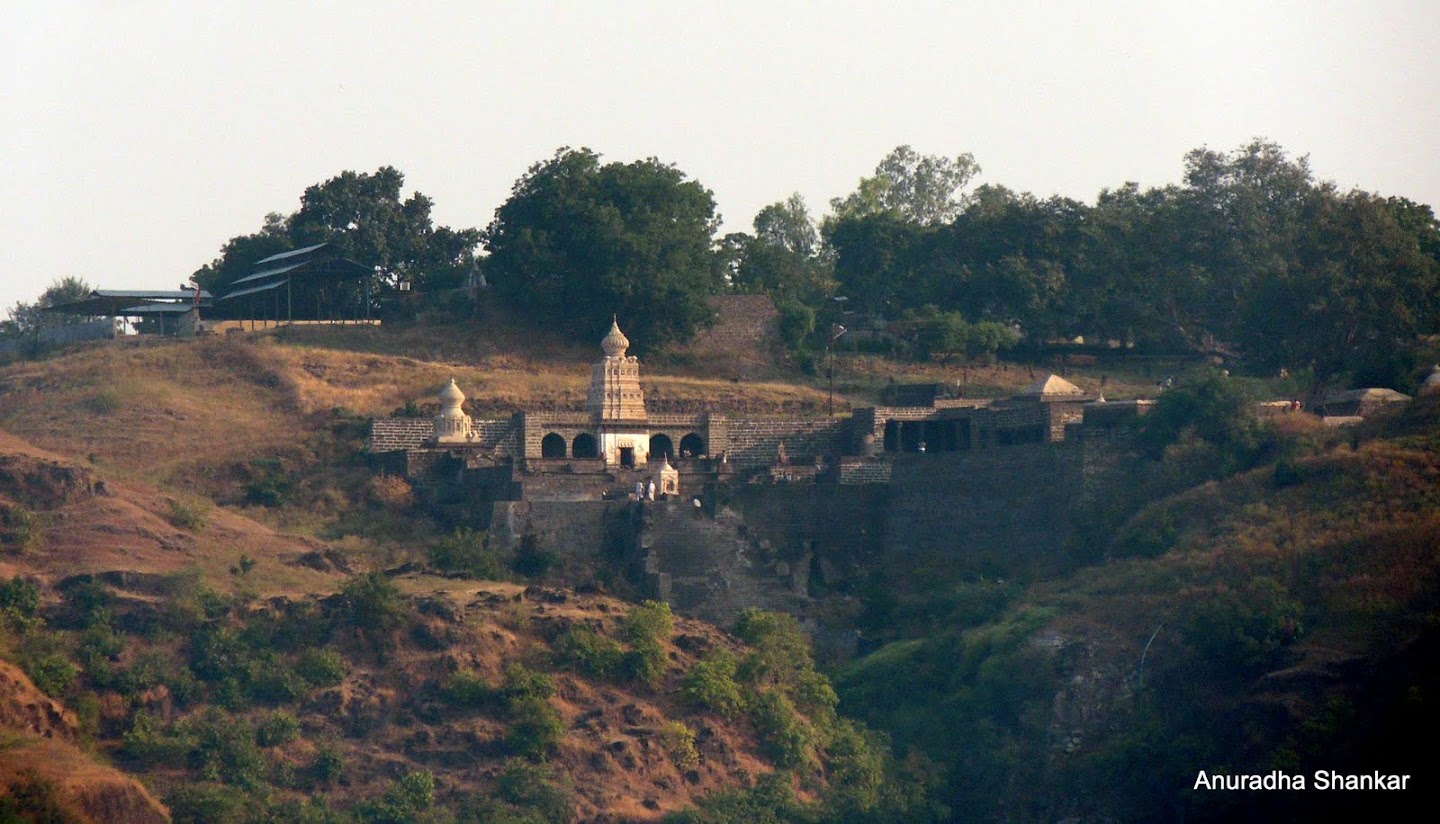 The Viraj Tirtha is a group of temples, built around the Gaumukh, which is a popular local pilgrim place. In sharp contrast to the lake and its temples, which were empty and ignored, this was a bustling place of pilgrimage, filled with people bathing and offering prayers. 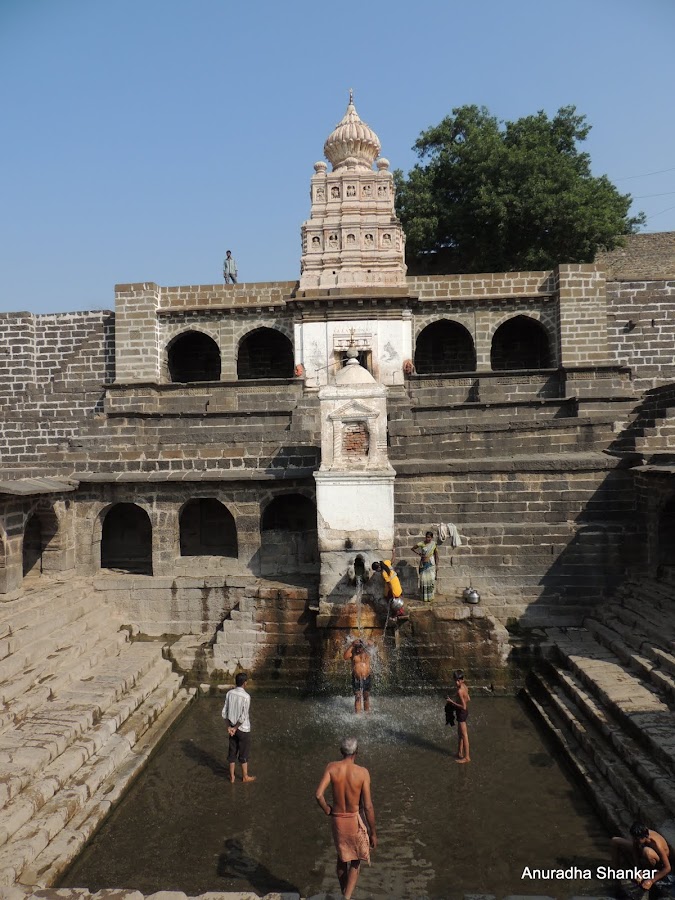 We had already walked for over three hours, and the sun was over our heads. My feet were killing me, and I couldn’t wait to get back to the room and rest. Yet, we had one more stop to make, to the most important temple here – the Daitya Sudan temple. 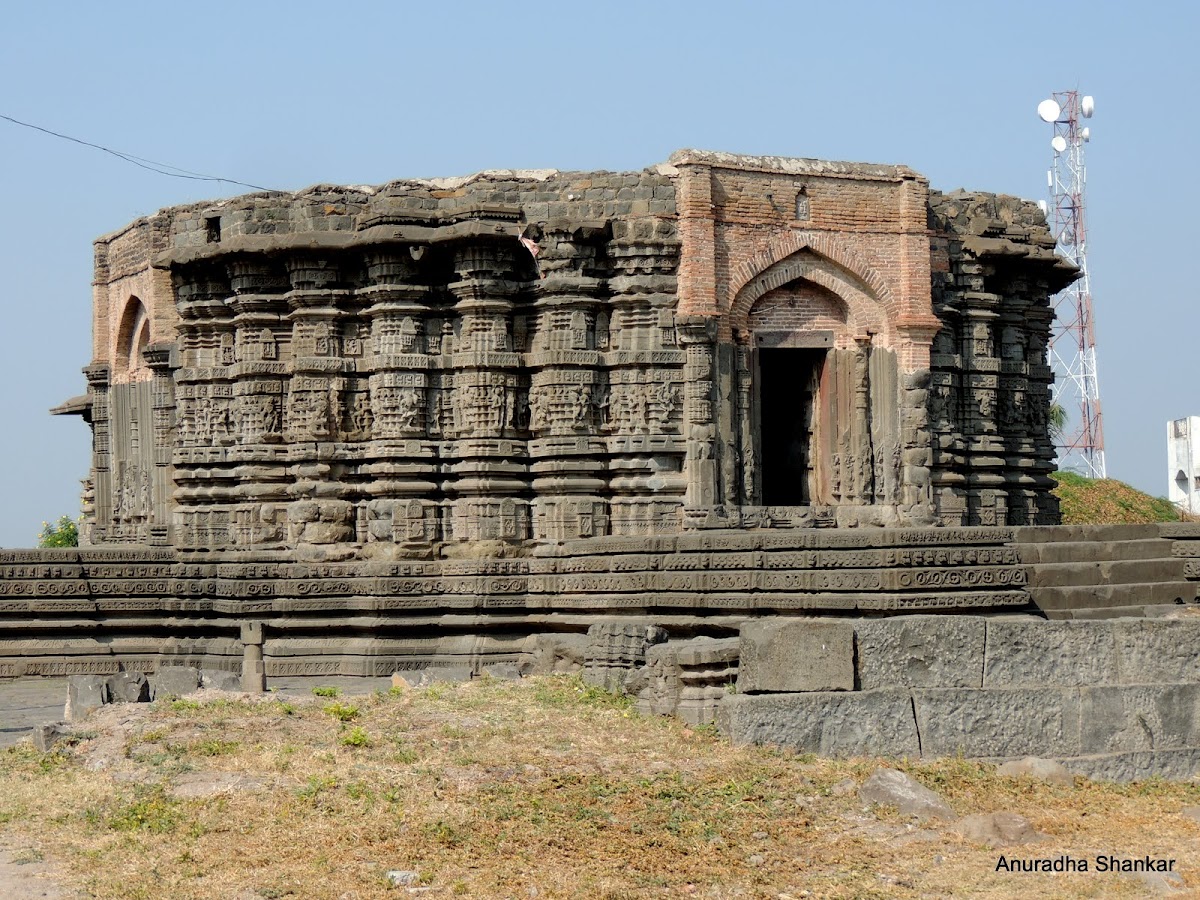 Daitya Sudan – the destroyer of the demon – is Vishnu, who destroyed Lavanasur. He is said to have hurled the demon into the earth, with all his strength, so the demon could never rise. He could only weep for his sins, and his tears filled up the lake. So says the legend, and so is he depicted in the temple, standing atop the demon. 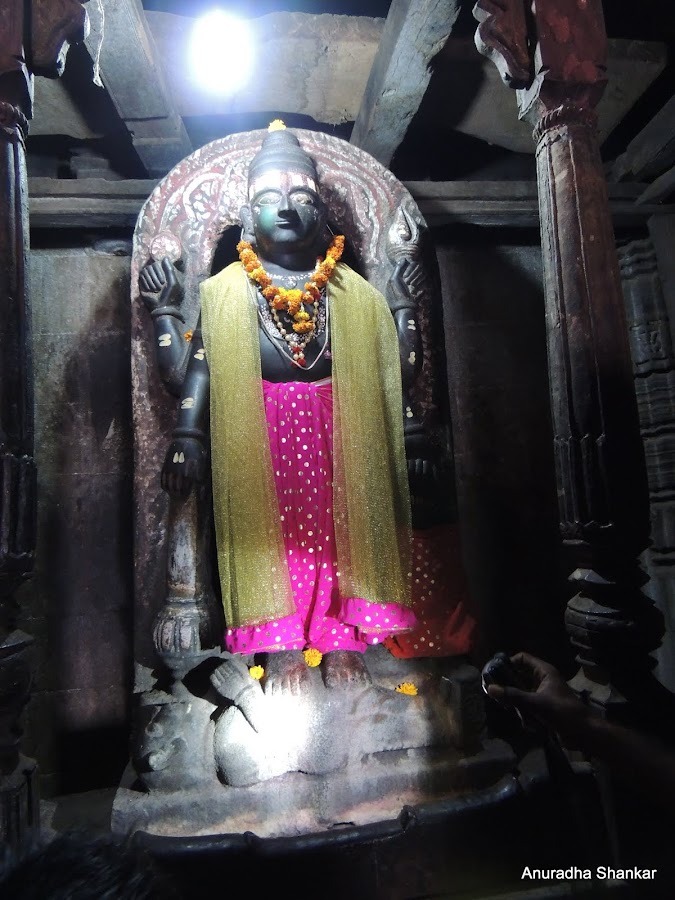 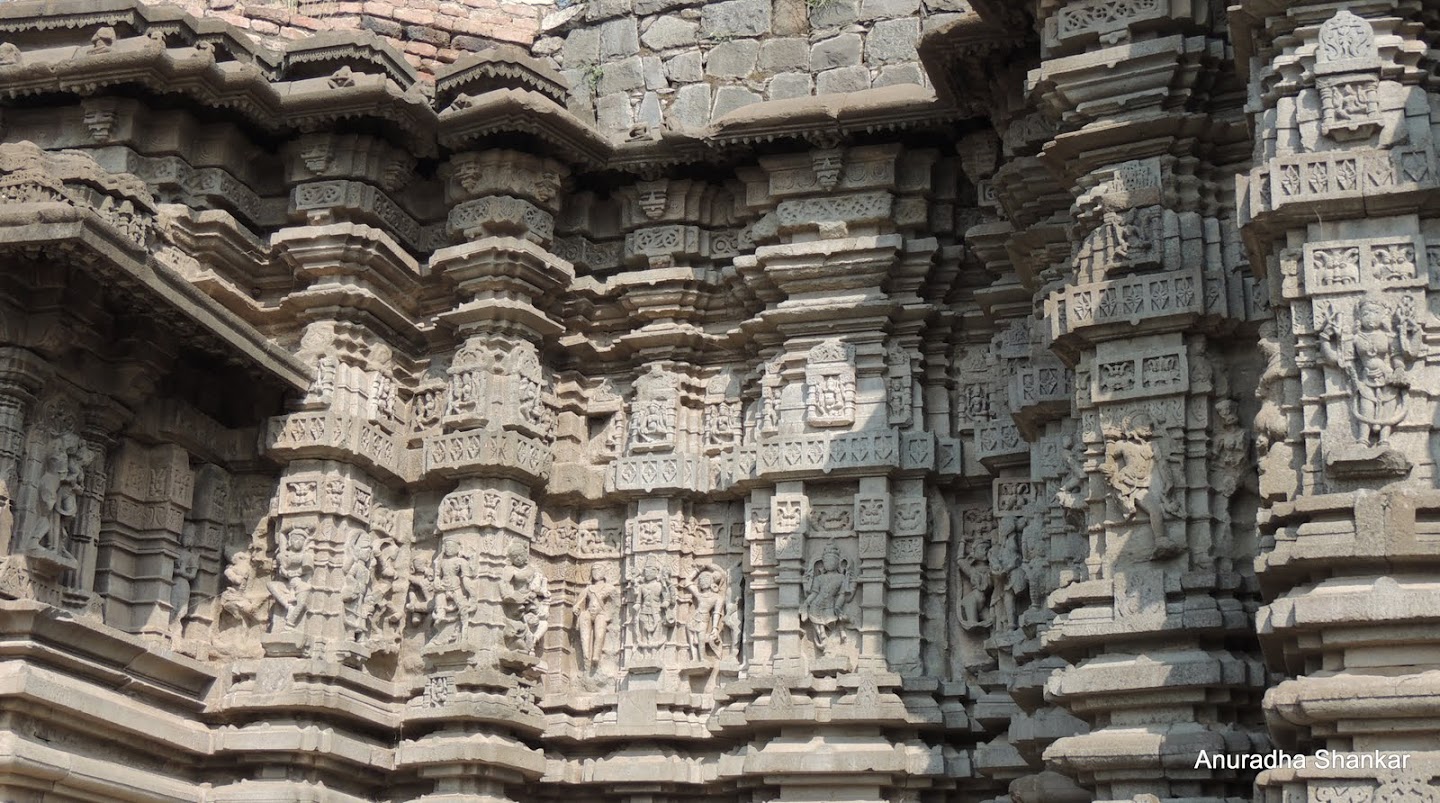 At the temple, we met Dr. Bugdane, a resident of Lonar who has done extensive research on the Crater Lake, as well as its temples. He has also published a book on Lonar, and was a fount of information. Pointing towards the brickwork, he spoke of early restoration work when the idol was installed and prayers were resumed in the temple.

Walking back to the resort, our guide told us that there were other crumbling temples in the vicinity too, but we were too tired to explore any more. However, we did make one more stop – to Ambar Lake, nearby, which is a smaller crater lake, said to have been created by a splinter of the meteor. The lake is no more, covered by fields and plantations now, but a small temple stands here, maintained by the family which owns this land. It is a temple to Hanuman, in reclining pose. While the posture is uncommon, more interesting is that the idol is said to have been made from a piece of the meteor! It is believed to have magnetic properties, though covered with sindoor, it seemed a pity that we couldn’t see the piece of meteorite, which would have been over 52,000 years old, at least!!!!

Heading back to the bus stand, we stopped at the edge of the hill once more, looking down at the lake. I remembered my thoughts of the previous night. Then, the shades of green had enraptured me. Now, I saw more, my imagination filling in the blanks my eyes couldn’t. And yet, one thought remained the same – the lake sparkled in the sun, looking like a jewel set amidst the mountains of green.

This article was originally published in the August 2016 issue of Exotica Magazine. You can read the original article here.