October 26, 2016
I have written about the temples of Khajuraho, and as the philosophy behind them. Yet, there is so much more to see and appreciate, so let me show you the temples through a different lens - by taking you on a visual journey of the temples through their amazing sculptures, identifying some of the many forms in which deities are portrayed. I begin with the various Forms of Vishnu...... 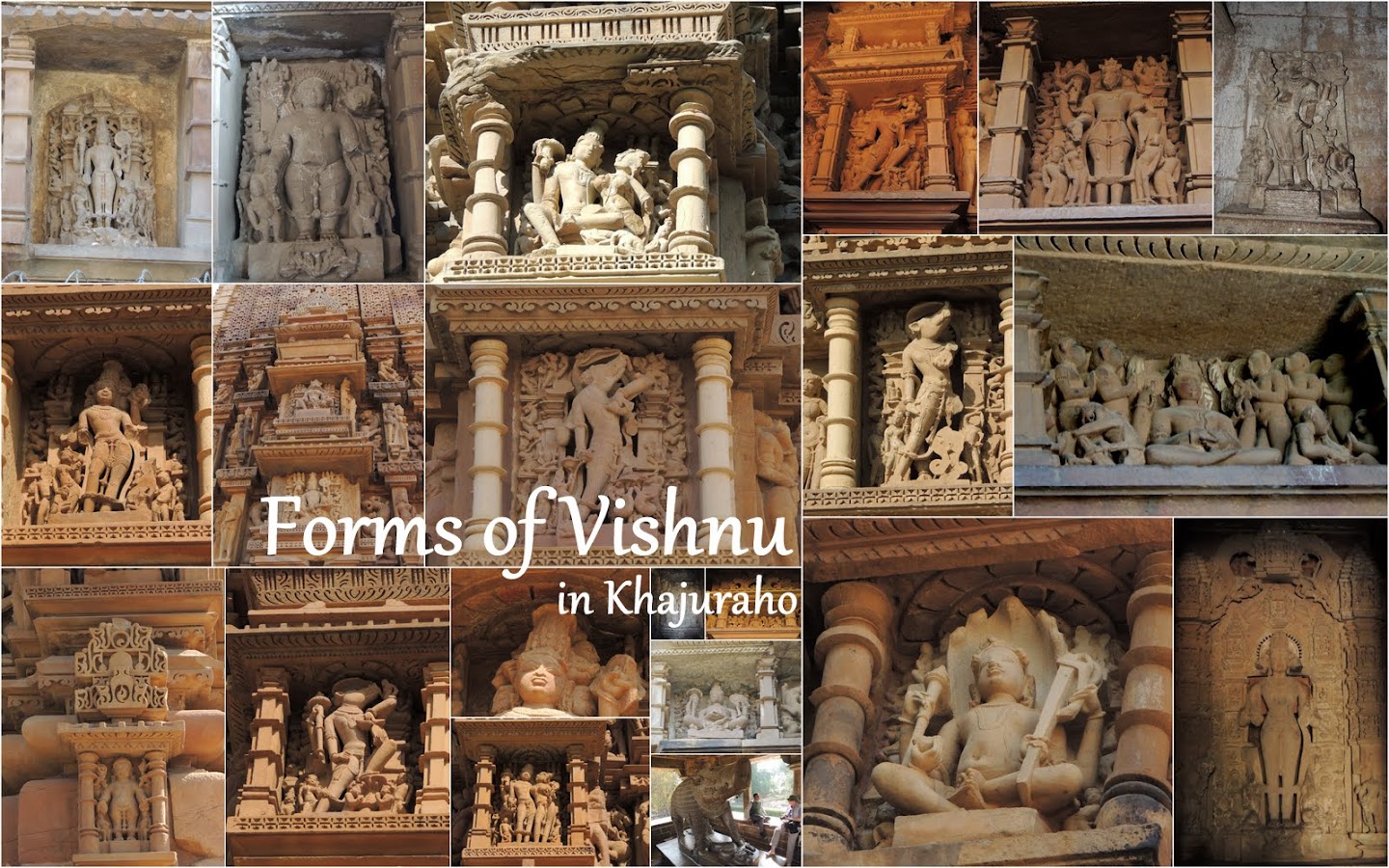 There are 10 temples dedicated to Vishnu at Khajuraho. It is, therefore no surprise, that there are so many forms of Vishnu to be seen! The most impressive of course, is the Vaikunta Vishnu, that I have already written about. He is, however, still the most fascinating form of Vishnu, so I begin the post with him.....

The concept of Vaikunta Vishnu is integral to the Pancharatra system of Vaishnavism, which came from Kashmir. He is visualised with four heads, three of them visible - the human one in front, and on two sides, the boar (varaha) and the lion (Narasimha), the two most important forms, according to the Pancharatra philosphy. The fourth head, which isn't visible, is behind - the Kapila or the terrible face. The different avatars emerge from one aspect of this cosmic form of Vishnu, which are then depicted all around the central figure, as well as all over the temple.

Among the Dashavatars, which are the most commonly seen forms of Vishnu,  Matsya and Kurma are mainly seen around idols of Vishnu, while Varaha, Narasimha and Vamana are seen in the niches around the temple as well. Both, Varaha and Vamana have temples dedicated to them as well. Among the rest, Parasurama, Balarama and Krishna are seen on the interior walls of the temple (which I have no photos of, due to the low light), and Rama is hardly seen, as is Kalki. It would appear that the acharyas who designed the temples focussed only on the early avatars of the Lord.

Varaha is one of the most depicted avatars in Khajuraho. To begin with, there is the massive Varaha in the temple dedicated to him.

These are just a few of the Varahas at Khajuraho... samples, so to speak, from some of the temples. Why was this great importance given to Varaha? Probably because he is associated with Bhudevi or Earth, and therefore, Land. The Chandela Kings probably associated themselves with him when they conquered kingdoms. The Varaha temple, for instance, was built in AD 950, to celebrate the Chandela king Yashovarman's victory over his Pratihara overlord. The King, thus seems to be comparing himself to Varaha, saving the earth from the reign of the evil demon (enemy king) he has defeated!

Narasimha is only seen in a few temple niches. A terribly mutilated, multi-armed Narasimha lies in the Museum. We can only imagine how majestic he would have looked!

Vamana is the only other Avatar of Vishnu enshrined in a temple. And interestingly, it is only his dwarfish form which is seen, both inside and outside the temple. His cosmic form, as Trivikrama is only seen in a few instances, as in the the panel of Varaha from the Chitragupta Temple.

As I have already mentioned, Parasurama, Rama, Balarama and Krishna are seen in some of the panels inside the Lakshmana Temple. However, due to low light, I do not have any photographs. The exception is this one...

While we are used to thinking of the 10 avatars as the only forms of Vishnu, there are many more we see in Khajuraho, of which the most important and interesting one is Hayagriva, where the Lord is seen with the face of a horse. It is believed that He took this form to retrieve the Vedas stolen by a demon, who also had the face of a horse. I have seen this depiction only in the South, so it was quite a surprise to see him here, and that too accorded the special place in a niche just outside the sanctum!

Vishnu is not often seen in a Yogic posture, but at Khajuraho he is often seen in this form too. These two panels are from the sanctum of the Lakshmana temple, where Vishnu is seen seated in a Yogic posture, as Narayana, surrounded by his devotees, who are trying different methods to attain his blessings. These two panels, along with two others, which I do  not have photos of, are extremely interesting, and you should read Dr. Devangana Desai's book on Khajuraho to know more about them. 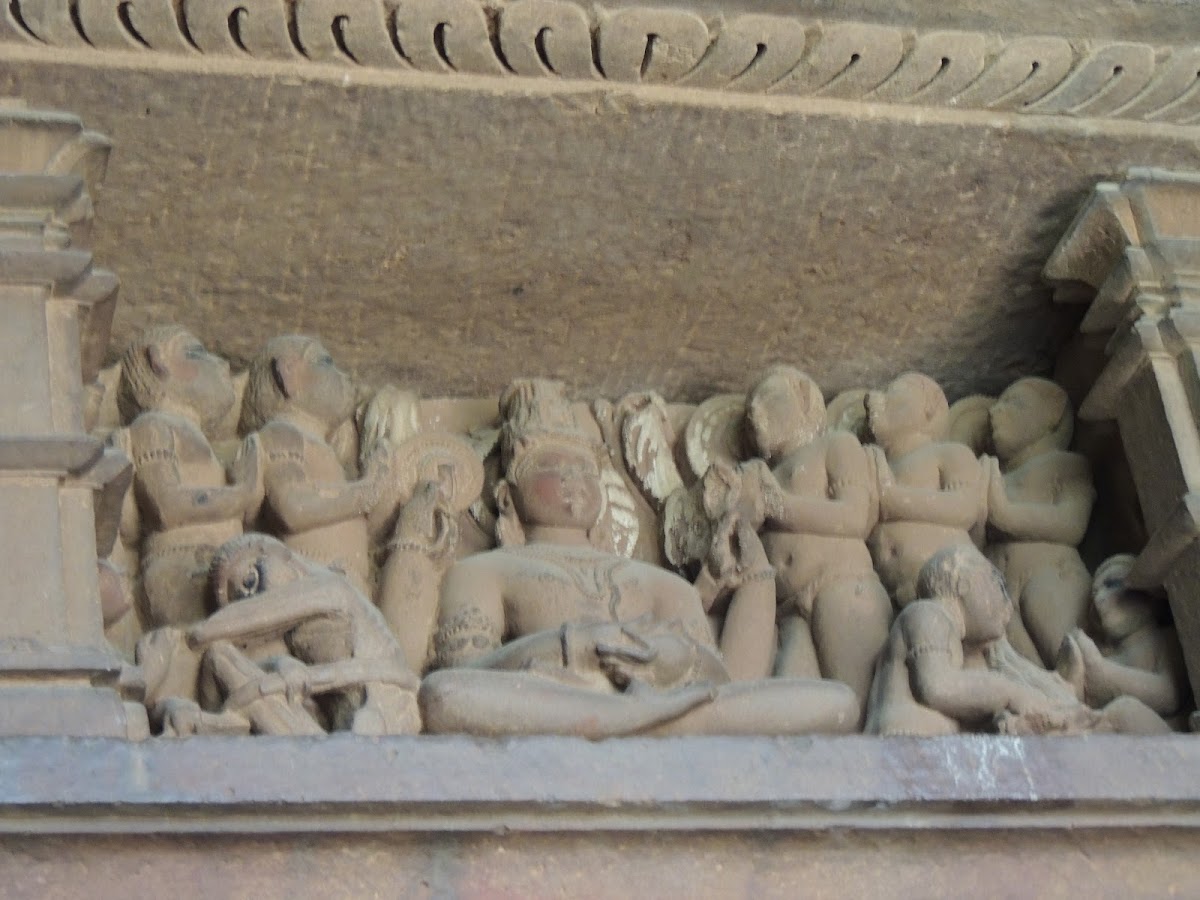 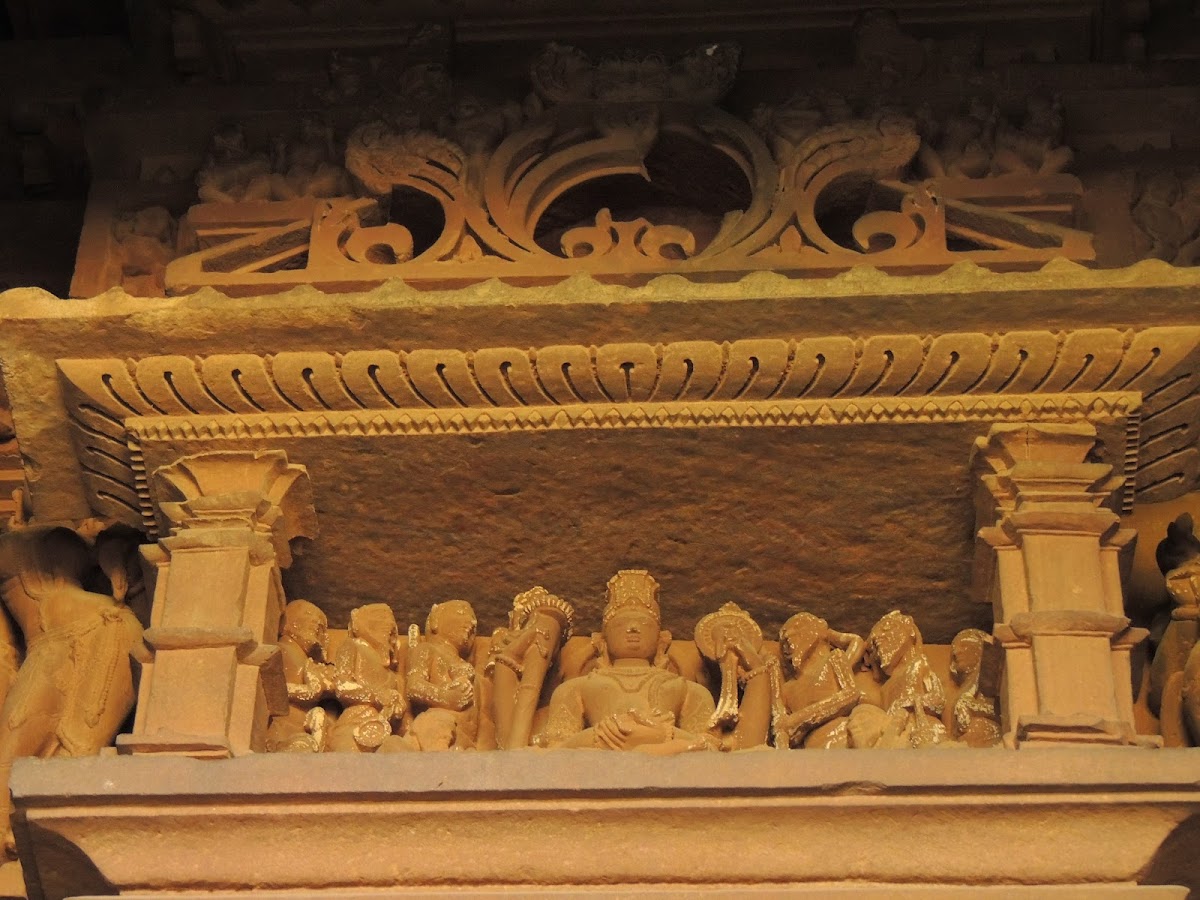 There are other forms in which Vishnu is seen too.... For example, at the Chaturbhuj Temple, he is enshrined in the sanctum in the form of an ascetic.

Vishnu is most often seen alone, unlike Shiva, who is often depicted with Parvati as Uma-Maheshwara. Here, however, there are many instances where he is seen with Lakshmi, both of them entwined with each other, just like Shiva and Parvati.

These are just some of the forms of Vishnu at Khajuraho. As you can see from the images, it is the size, depiction and placement that determine his importance in the pantheon, though He is seen in both, Vaishnava as well as Shaiva Temples.

Is the same true for Forms of Shiva as well? Wait for my next post to find out!

Games for Kids of the World