December 21, 2016
Kabini. There is something magical about the word itself. The landscape is no less magical, with the river running through a lush green terrain, with thick forests and fertile fields. We had seen the river on multiple visits to the region, but the reservoir, and the forest reserve, which are both named for the river, had eluded us, for years. Probably the time hadn’t been right. 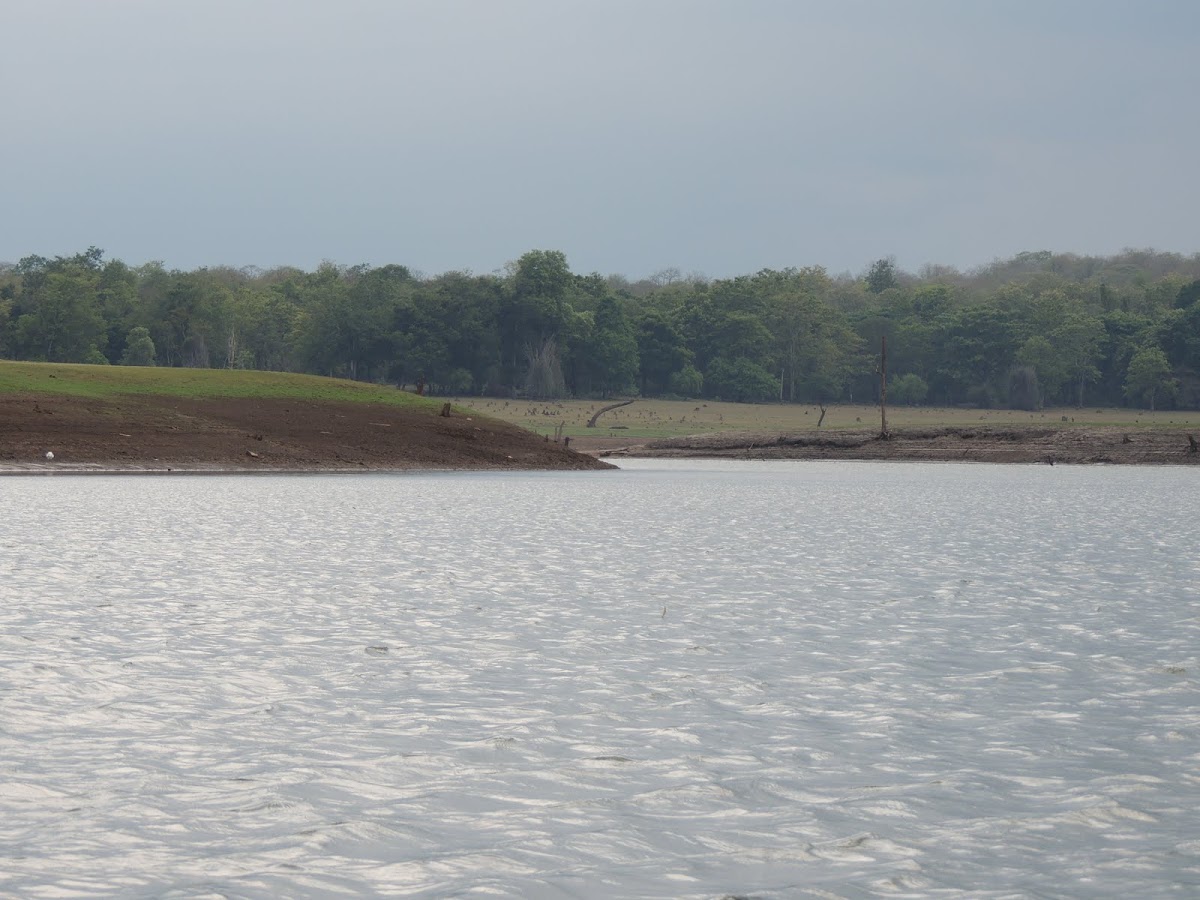 Earlier this year, as we planned our summer trip, and my son’s 13th birthday, there was only one choice for a wildlife destination – the Jungle Lodges Resort at Kabini!

My first trip to a JLR camp was at Kali River Lodge, Dandeli,way back in 2002. Since then, we have visited many more of their resorts, and admire, both, their dedication towards nature and wildlife, as well as their commitment to sustainable tourism. Kabini, as one of their most popular properties, was one we were eager to visit. 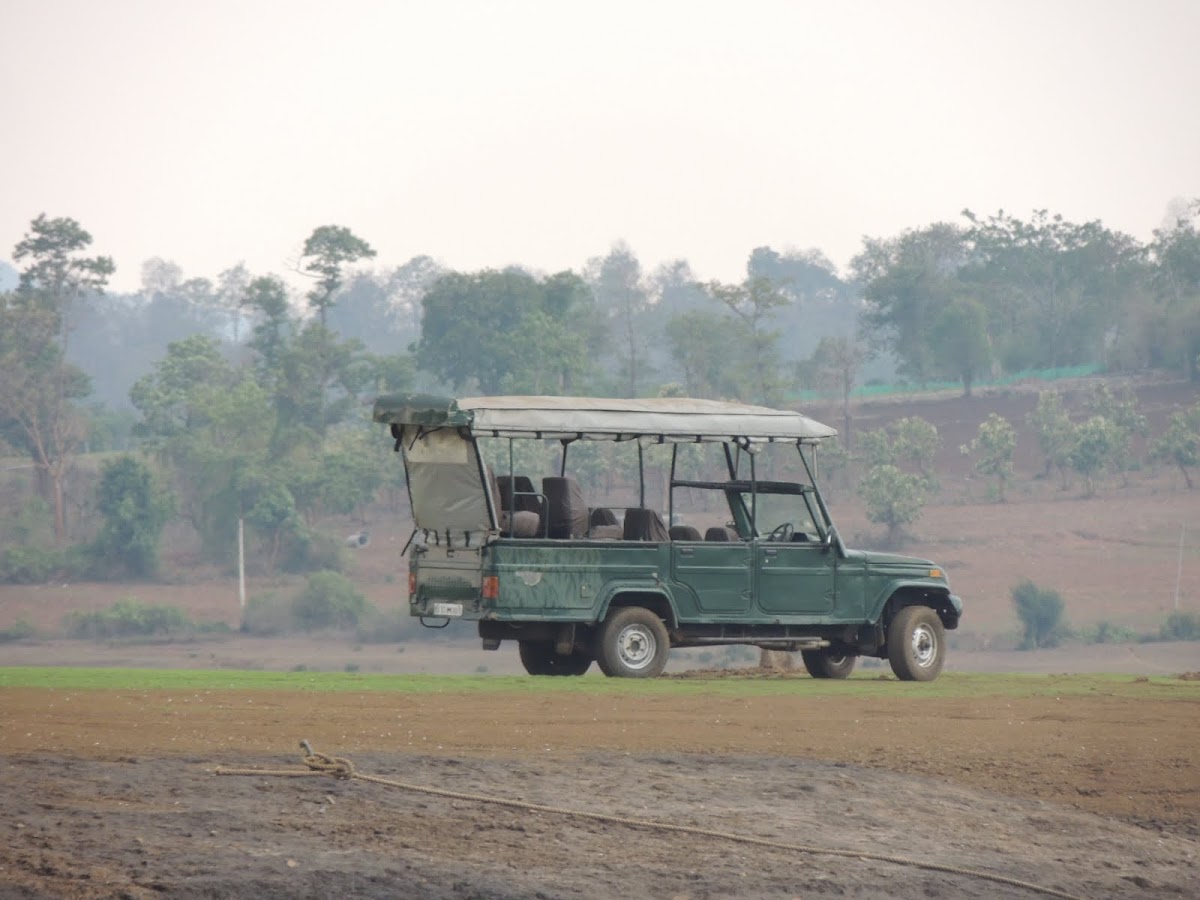 We arrived at the Kabini River Lodge on a hot summer afternoon, eagerly looking forward to our first jaunt into the forest. Even as we settled into our jeeps, the skies darkened, and it began to rain! Summer showers are usually quite welcome, but when we are all set to go watch animals? Certainly not! It wasn’t only Samhith who was disappointed, but also our fellow travellers, who were ardent photographers, with cameras and gears that wouldn’t react very well to rain! So, covers unearthed and zipped up tight, we headed into the forest, a gloomy lot.

It is at times like these, that the well trained naturalists of JLR show their mettle. The naturalist who accompanied us (whose name I have sadly forgotten), braved the rain, and our low spirits, to talk of the forest and its many inhabitants, urging us to keep our eyes open, for we never knew what we might just happen to spot! Thankfully, nature too smiled on us, and brought a whole herd of elephants in our path! Watching the elephants in the rain, and the older ones shield the young, was quite a sight, which brought out the smiles and raised our spirits! 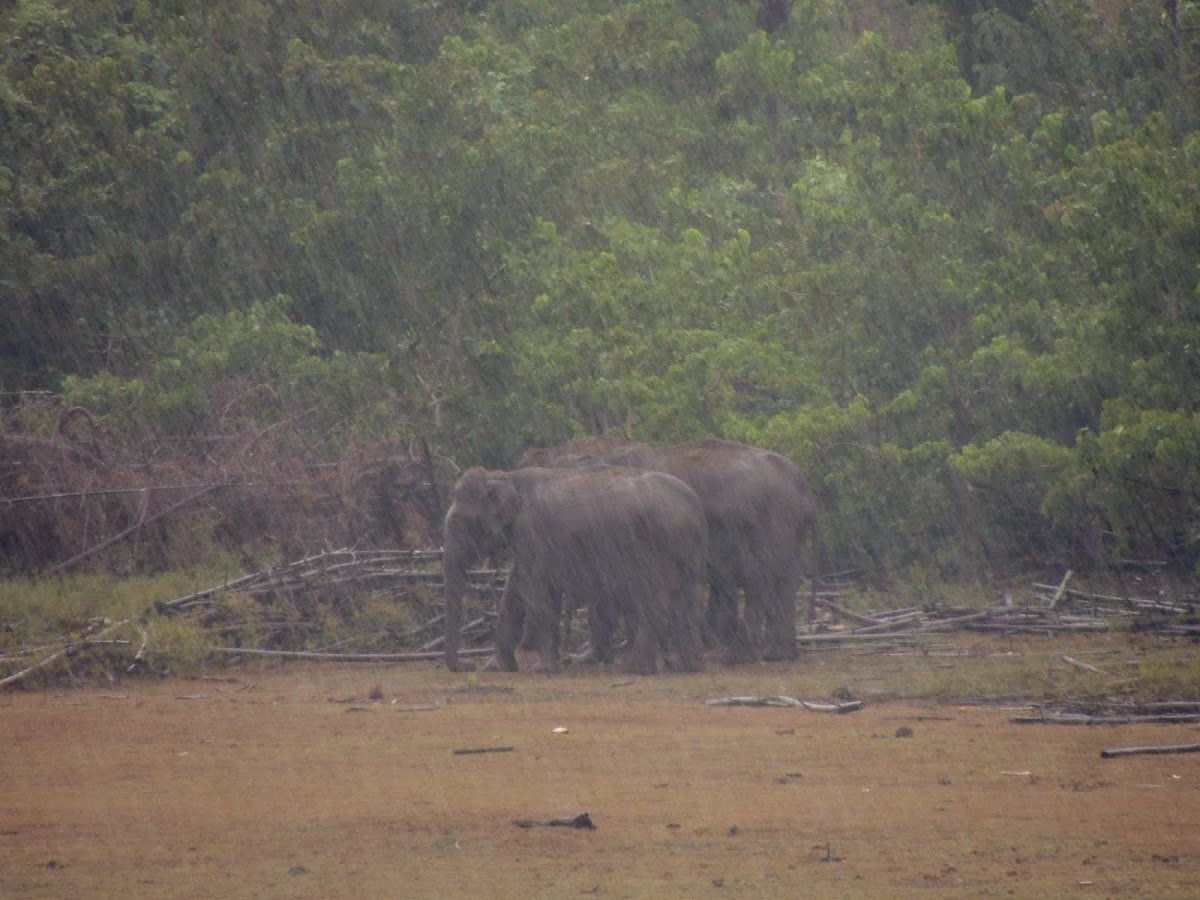 As we drove through the jungle, the animals may not have been visible, but we could admire the vibrant landscapes instead! 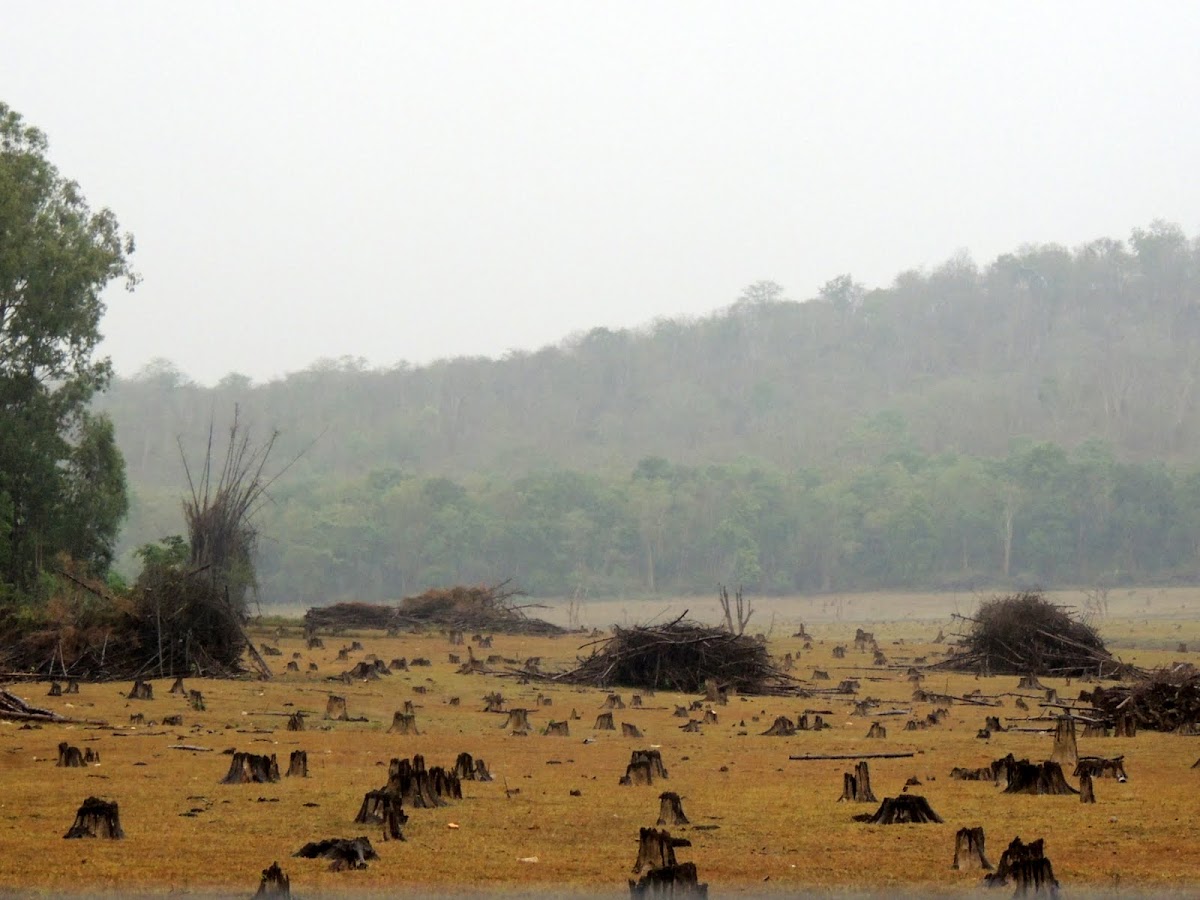 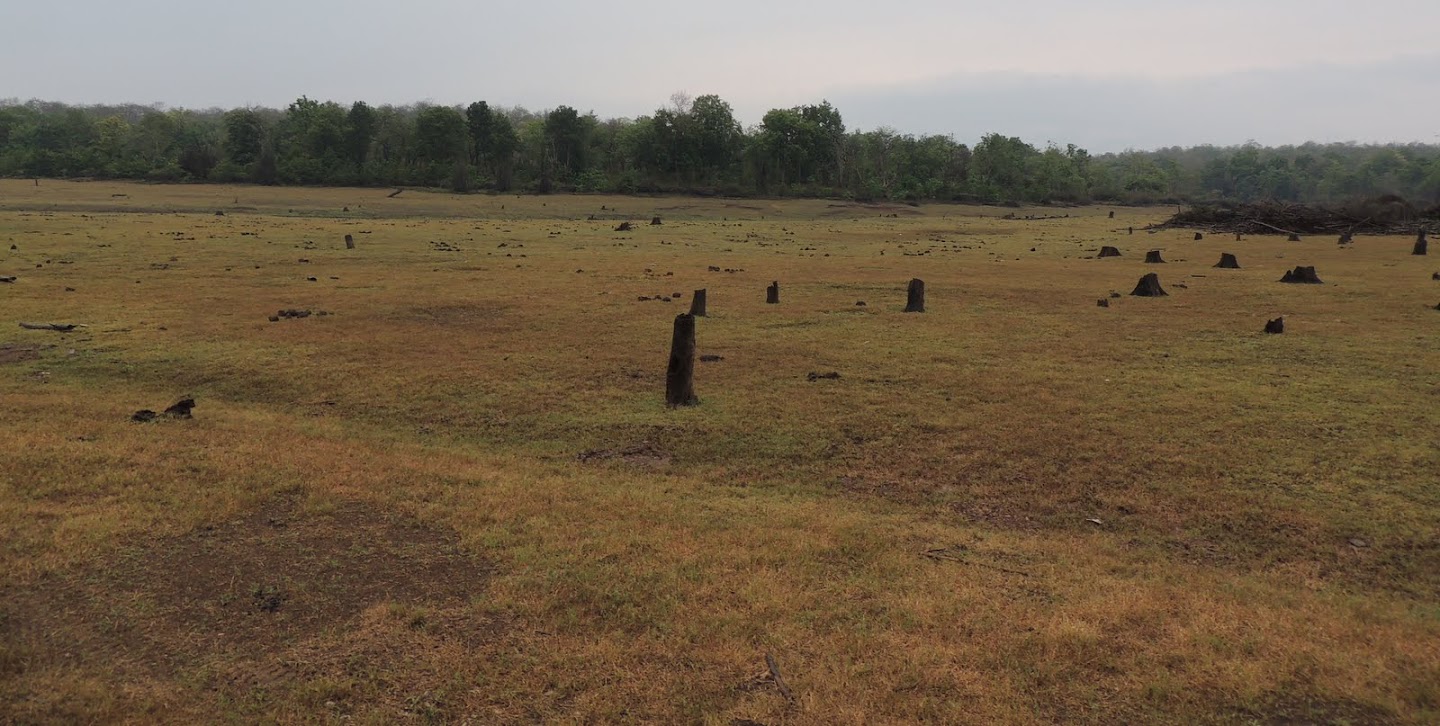 We were almost through, when suddenly, our driver stopped, and backed up. “There” he pointed. “There’s a leopard on that tree!” Eager to spot the leopard, we craned our necks and peered into the trees, but to no avail. Even with binoculars, it was hard for us to spot what our driver had, with his naked eyes! Eventually, zooming in with the camera, we were able to get our first glimpse of the leopard, curled snugly on the branch of a tree. 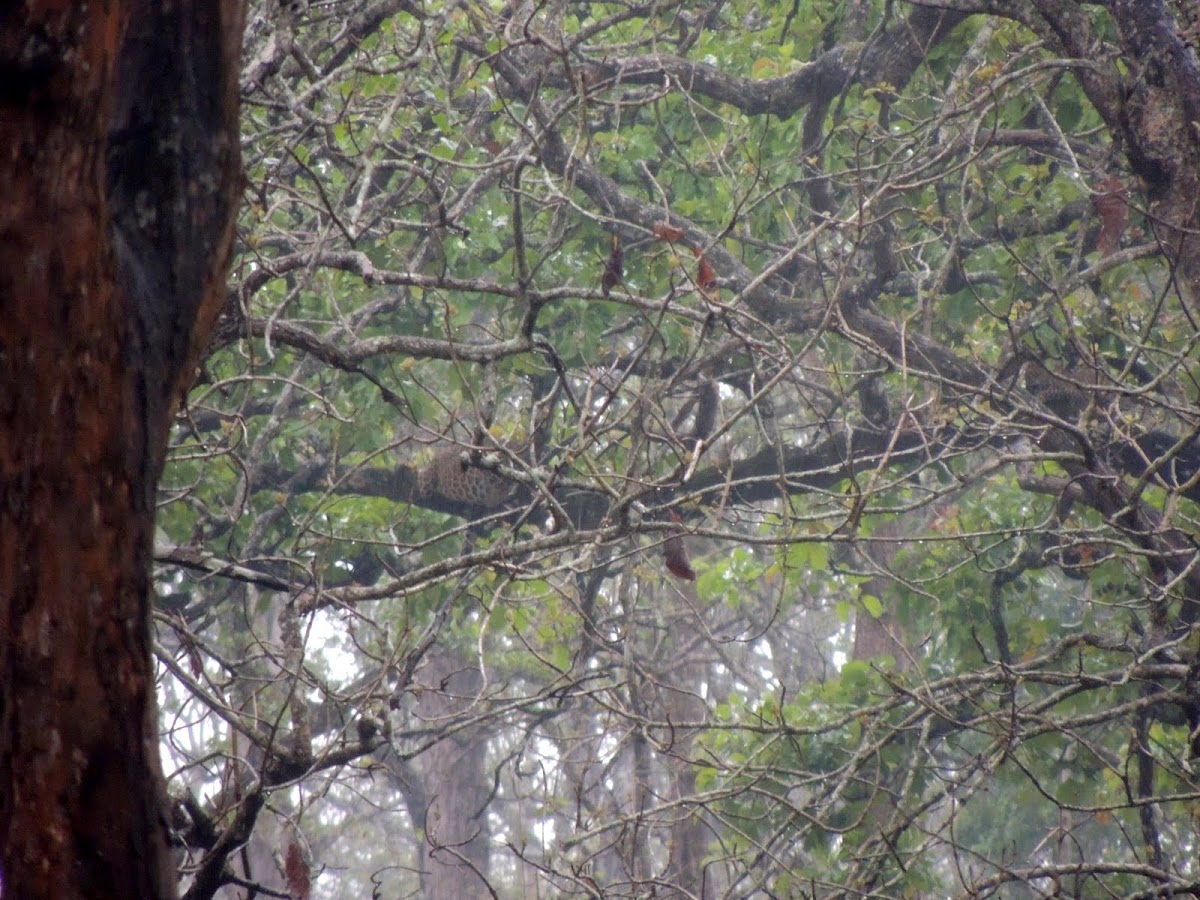 Could you spot the leopard in the pic? This was clicked with the max zoom on my camera! Now, can you imagine someone spotting this, with his naked eyes, while driving through? You now know why we are so in awe of the people of JLR! 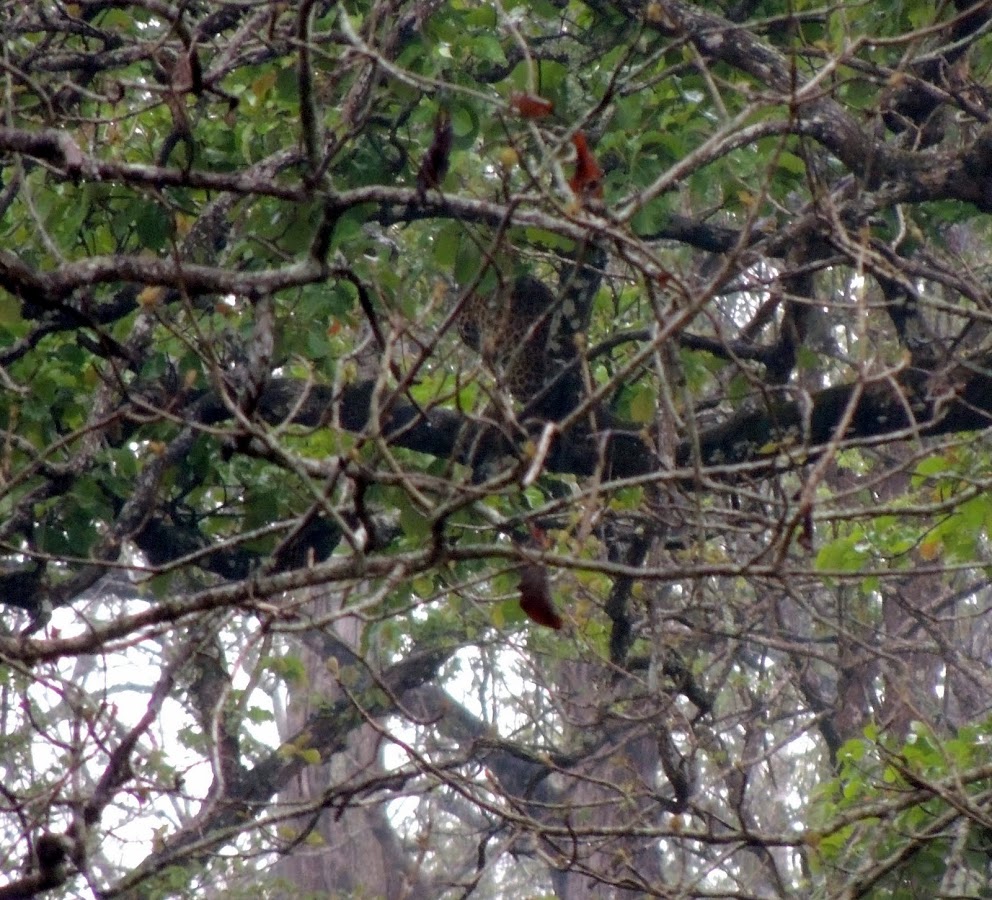 Other jeeps joined us soon, and our co-travellers showed off their photography skills, managing to capture the leopard as it turned and stretched. We, of course, had to make do with blurry views through the lens of my simpler camera. Incidentally, these photographs were all clicked by Samhith, who was the first one in our group, to see it through the camera! 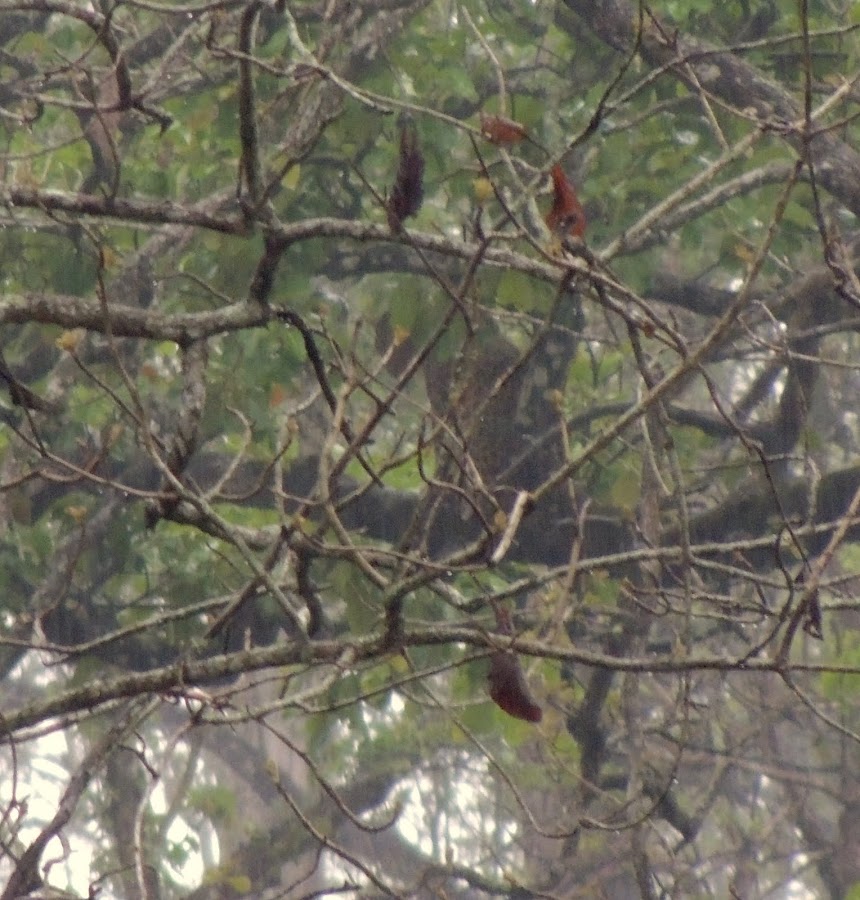 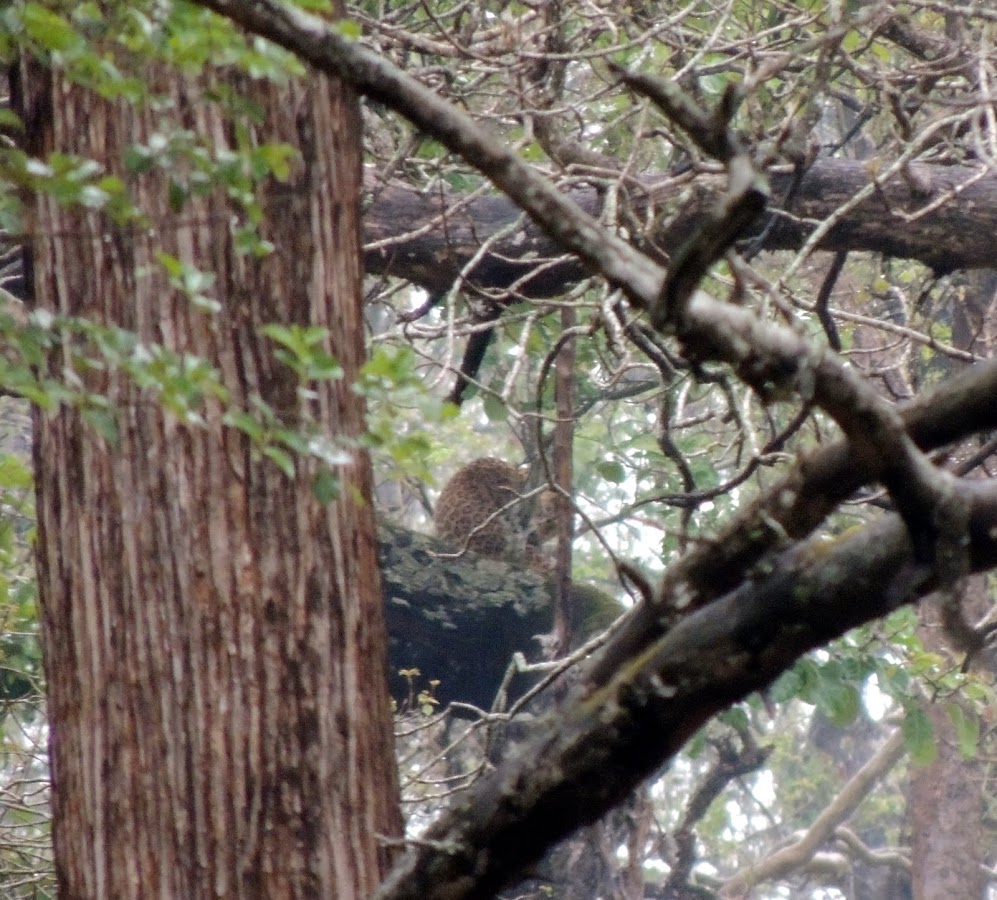 A commotion suddenly disturbed the relative peace, and our driver hurriedly drove us towards what appeared to be another herd of elephants. It turned out (as we heard from other jeeps) that we had just missed a tiger, startled by the elephants! Regretting the missed sighting, we settled instead, for watching the elephants have a mud bath! Much as I would have loved to see the tiger, it was no less exciting to see the playful way the elephants frolicked in the mud! 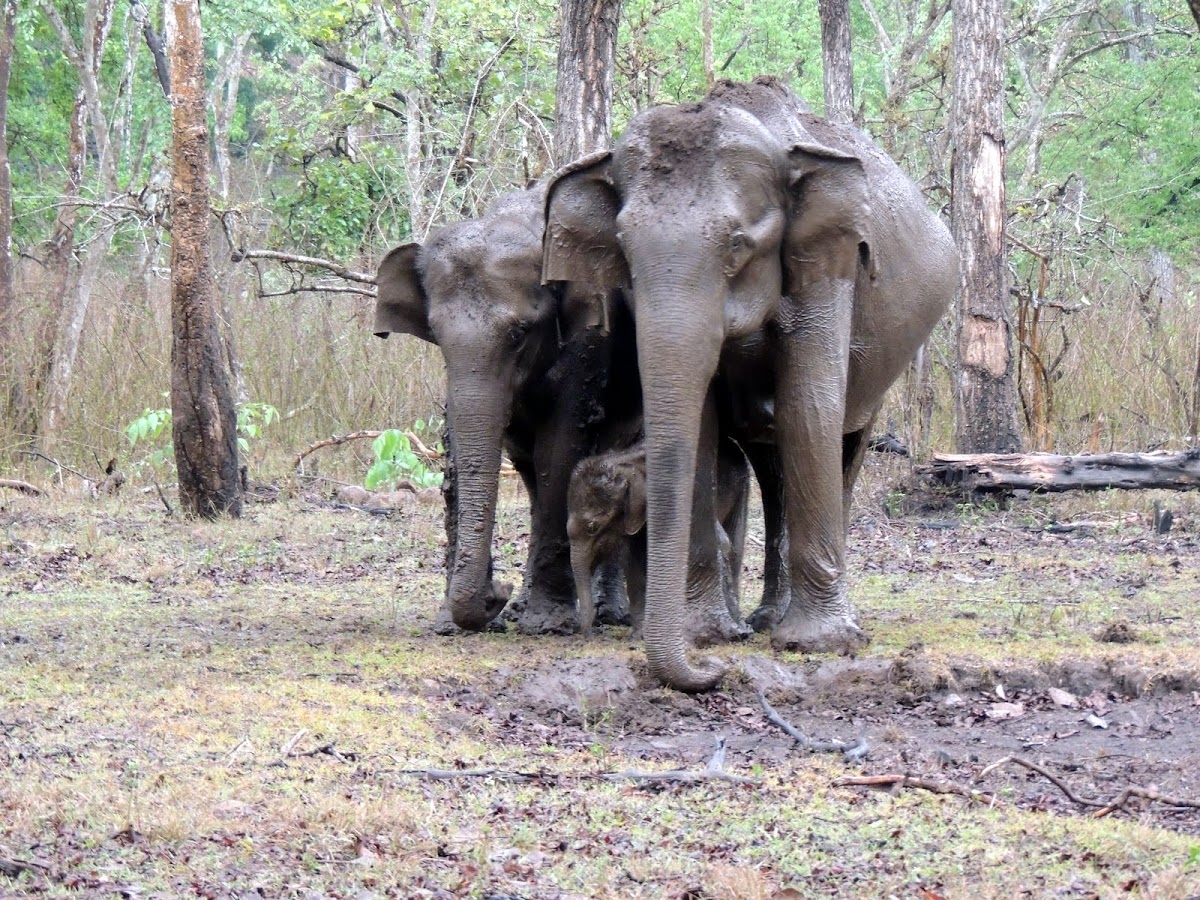 As we made our way back, the leopard was still cosily settled on the tree. It was quite a high-spirited group which returned to the lodge, singing praises of our driver, for his spotting of the leopard! Who knew that a rainy day would turn out so bright?