A flock of peacocks flew into the bushes as we alighted from our car. Samhith grabbed my camera and followed, trying to capture them on film, while I followed a little more slowly. As the narrow path widened, I caught my first glimpse of the temples of Kiradu.

There was no guide available, and in fact, we were the only visitors that day. Sunil from Suryagarh was our unofficial guide, but I listened to his stories of Kiradu with only half an ear, for my attention was captured by the temples themselves, and their stunning sculptures. Forgetting the camera, I stood, transfixed, at the centre of the mandapa at the Someshwara temple, looking around me in astonishment, at the sheer number and detail of the carvings. Sunil must have sensed my complete immersion in the stone images, for he abandoned his narrative of the famed curse of Kiradu, and looked on, amused, as I went from pillar to pillar, trying to identify the figures depicted on them.

It was late afternoon, and sunlight fell beautifully on the sandstone, lighting it up perfectly for photography. Belatedly realizing that I was here not just to admire, but also write about these temples, I hurriedly reclaimed the camera from Samhith, who was by then trying to photograph other birds along with the peacocks. I had no eyes for birds, for the temples occupied my full attention!

The temples of Kiradu, (located about 35 Km from Barmer and 180 Km from Jaisalmer) are believed to have been built during the 11th to 12th centuries, by the Paramara rulers of the region, who were feudatories of the Chalukyas of Gujarat (also called the Solanki Rajputs). It is said that there were once 108 temples in this complex, but only 5 remain now.

The biggest, and best preserved temple here today is the Someshwara temple, dedicated to Lord Shiva, and named for the king who ruled around A.D.1161, according to an inscription. Kiradu was then known as Kiratakupa, and was the capital of the Paramaras. It is also believed that this is an ancient site, associated with the Kiratas (a hunting tribe) mentioned in the Mahabharata.

Among the five temples, four are dedicated to Shiva, and one to Vishnu. Architecturally, these temples mark the beginning of the Maru-Gurjara style of architecture, which is a fusion of the earlier styles prevalent in the desert state of Rajasthan (called Marusthala), and Gujarat (Gurjara).

The two biggest temples – the Someshwara Temple, and the one to Vishnu, both have octagonal Mandapas. At the Someshwara Temple, the lower halves of these pillars are square and bare of sculptures, with only a hint here and there of the intricacy they once might have borne. The upper halves however, bear a wealth of figures…. Of different forms of the gods, Brahma, Vishnu and Shiva, both, alone as well as with their consorts, the Matrikas, the Dikpalas, and even sages.


The pillars at the Vishnu temple, on the other hand, are octagonal in shape, and are profusely carved all over, with figures of dancing women at the lower level, followed by Matrikas and different forms of the gods, as well as Dikpalas. Above them are the heavenly beings, the Vidyadharas, and then a row of Kiritamukhas.  Above the pillars are Makaras, from which emerge arches, which add to the decorative element of the Mandapa, apart from the practical purpose of adding support to the roof! Sadly, only two of such arches remain, and nothing remains of the roof itself.

Coming to the main shrine, no idols stand in them, and we only know that they were Shiva / Vishnu temples from the lintels, and inscriptions. The door frames themselves are intricately carved, with some very interesting features.

At the Someshwara Temple, the lintel is carved in two levels, with a variety of images, including Brahma, Vishnu, Ganesha, Kartikeya, and multiple forms of Shiva, indicating that this shrine would have once housed a Shiva Linga.

It is very interesting to note that the central image on the upper level of the lintel is a composite figure, combining the aspects of Shiva, Vishnu, Brahma and Surya, or Hari-Hara-Pitamaha-Surya, similar to what we had seen at Khajuraho!

The door frames, very interestingly, depict 6 deities, three on either side. These include Ganesha and 5 Matrikas, among whom, Varahi, Indrani and Chamunda are recognizable.

At all the three smaller Shiva temples, the two layered lintel includes images of Ganesha, and Kubera, along with Brahma, Vishnu and Shiva, 5 female deities or Matrikas, and the Navagrahas. The five Matrikas appear on the doorframes as well, along with Ganesha.

Walking around the temples, trying to identify the different images, I was repeatedly reminded of Khajuraho, especially since I could now identify the Ashta Dikpalas facing their particular directions on the outer walls of all the temples.

The placement of the sculptures also reminded me of Khajuraho, for example, each deity is flanked by Apsaras or Surasundaris, and Vyalas or mythical creatures.

At some of the temples, along with the Vyalas, there are also what appear to be sages or holy men...

No wonder these temples are compared to the ones at Khajuraho. However, while there indeed is a superficial resemblance, these temples mark a different stage in the development of the architectural style, and deserve to be recognized and appreciated as such.

It was also very interesting to notice the different manner in which deities were depicted. The Dikpalas are large in size and easily visible on the outer walls of the temples, and are also seen on the pillars and higher niches of the spires. The Matrikas are smaller in size, but depicted in great detail. We also see the gods with their consorts on the pillars and in the niches.

Shiva is seen as Nataraja on the lintel of the Someshwara temple, and he is shown in his various victorious forms, with multiple arms, on the outer niches of the temple. Sadly, these images are broken beyond recognition, so it is difficult to identify them.


There are also a few composite images, apart from the one of Hari-Hara-Pitamaha-Surya from the lintel of the Someshwara temple that I have already shown you. On the pillars are two unusual composite images, of Ardhanareeshwara and Hari-hara, seen in a seated position!

At the Vishnu temple , only two of the outer niches remain, and here we see Vishnu in his meditative posture, as well as on Garuda, flanked by two elephants, which is an unusual depiction.

At the Someshwara temple, among the figures on the pillars, I noticed two of Vishnu – one as  Vamana, the dwarf, and another, which appears to be Buddha.

However, I looked in vain for other images of the Dashavatar. Did they exist, and were they destroyed? Or were they never carved? I suppose we shall never know. And therein lies the biggest difference between Kiradu and Khajuraho – that we know so little of those who built these temples, and their beliefs.

However, there is a similarity – in that this must have been, just like Khajuraho, a place where the royal family, and perhaps, others too, built temples, for religious merit. The deliberate destruction wreaked upon these temples also hints at how important the place must have been, both, socially and politically, during the period.

As we made our way back, past the piles of carved stones which lie all around, spotting more peacocks posing for us, the guard at the gate kept calling us, asking us to hurry, since it was time for him to go back home. No one stays here after sunset, not even the guard, thanks to old legends of a curse. 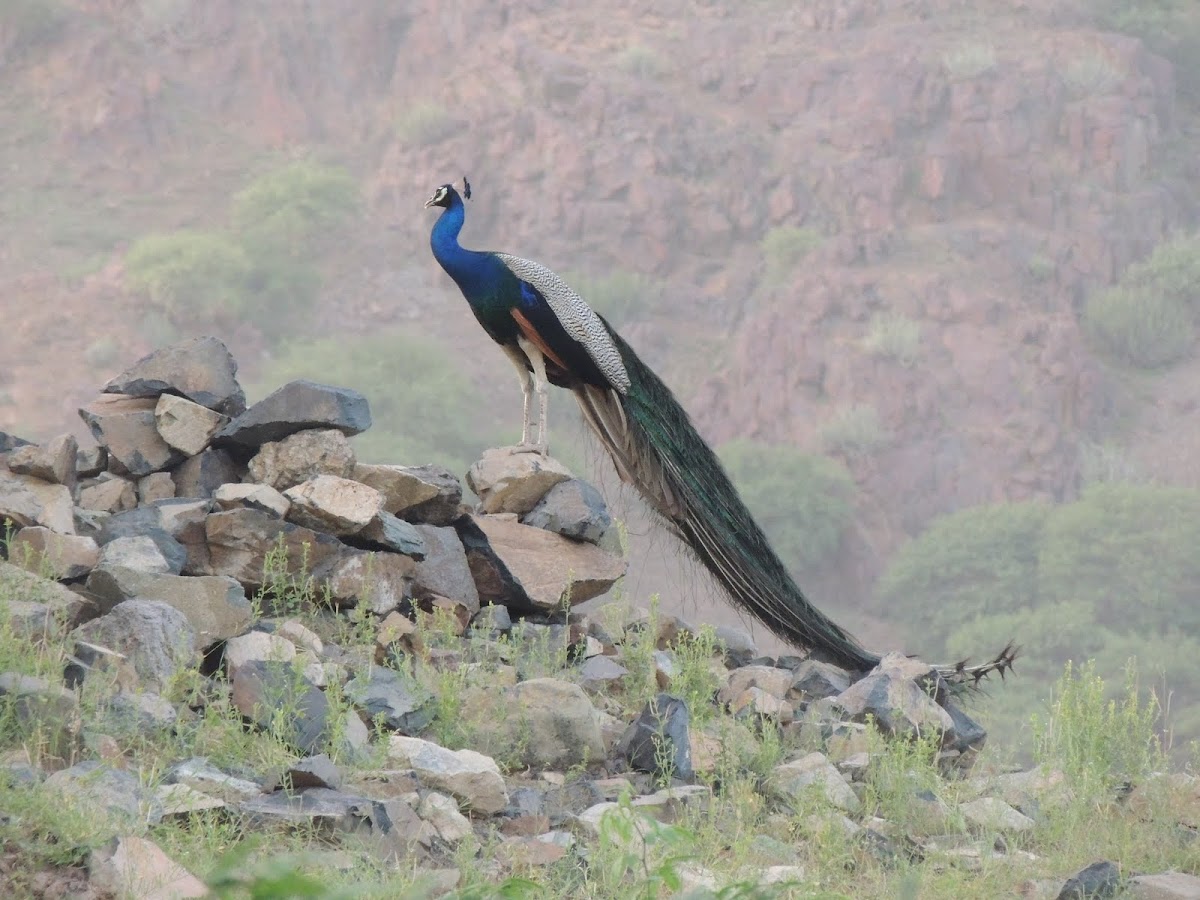 Sunil told us one version of the curse, and the guard another. The story essentially was the same – of the villagers here who neglected a young disciple of a sage. The poor boy went hungry, except when a potter’s wife took pity on him and fed him. The sage returned to find the boy in a pitiable condition, and cursed the whole village to be ruined. He of course, warned the potter’s wife to leave, but she gave in to curiosity, and stopped for a final look, and was turned to stone!

By the time the guard finished telling us the story, he was so enthusiastic, that he guided us some way down the road to a clearing, where, buried in the sand, was part of a stone… with a figure on a horse. It was a hero stone, which the locals believe is the potter’s wife!

A short distance away, also partly buried in the sand, outside a row of shops, is another stone – a Govardhan, which is some sort of marker, with Ganesha depicted along with other deities on its four faces.

As we drove away, watching the last rays of the sun disappear behind the mountains, I wondered how many more such stones lay buried under the sands. How wonderful it would be, if we could hear the stories these stones could tell us, of those who lived here, when these temples must have been bustling with priests, pilgrims and kings!

That was almost three months ago. However, as I sit today, writing this post, there are two images which keep coming back – one of my husband and son standing at the entrance of the Someshwara Temple, intently looking at an inscription on the wall, trying to decipher it, and, when they couldn’t read it, trying to imagine what it said; and another of my son, sitting on a stone in the Vishnu temple, imagining himself as a king, watching a dance performance in the octagonal mandapa. Much as I enjoy wandering around temples, trying to understand them, and those who built them through the iconography, these two images are strangely satisfying memories, for they reassure me that I have passed on the love of these ancient sites to my son, who looks at them, not through the lens of history, legend or myth, but through imagination, which, after all, is just as potent!

A very special Thank You to Suryagarh, for hosting us and giving me the opportunity to visit these amazing temples, along with my family.

To read more about Kiradu, head over to Sudha’s post on the temples. Sudha visited the temples  about a month before me, and since I returned, we have been having a grand time exchanging photos till late into the night, trying to understand more about the images and the temples. This process has been just as much fun as visiting the temples! Having said that, we have also realized that the two of us have seen completely different aspects of the temples - for example, we seem to have noticed completely different sculptures -  and would someday love to go back… together.

Disclaimer: I visited the temples of Kiradu in September 2016 on an invite by Suryagarh, who ensured that our long trip from Jaisalmer to Kiradu and back, was comfortable, and added their own special touches to make the journey memorable. Needless to say, while the experience was courtesy Suryagarh, the words are all my own!