Abhaneri - The once radiant city

April 19, 2017
From the outside, the structure looked unimpressive. A couple of old men were seated on a table, there was no ticket counter, and above all, no visitors. “Are we in the right place?” was the question foremost on our mind. Our hesitation must have been obvious, for one of the old men walked up to us. “Come in, Come in!” he exclaimed. “Would you like a guided tour?” That was reassuring, and we were quick to accept. Following him through a pillared pavilion, we entered into what appeared to be another world! The distinctive steps, descending into the earth, told us we were where we wanted to be – at the Chand Baori, Abhaneri.

The Chand Baori at Abhaneri is among the oldest step wells in Rajasthan, built somewhere around 825 AD, by Raja Chand, who was one of the Nikumbha rulers of the region, under the Pratiharas. It is 20m deep, and is built in 13 levels, making it also one of the deepest in the region. There are said to be 3500 steps here, and they are joined without any mortar, or iron clips, but are perfectly cut and fitted into each other. And so they have stood, intact, for over a thousand years!

Standing at the edge of the steps, protected by railings, we looked down at the water far below, and listened to what little our guide knew about the step well and its story.

Abhaneri was once Abha-Nagari, which means, city of radiance. The name of the city is said to originate from the well itself, which was built around a freshwater spring. On full moon nights, the moon, and its reflection in the water, would together throw their light all over, making the surroundings bask in the glow. Right next to this stepwell was a grand temple to Vishnu, which must once have reached for the skies, the perfect counterpart to the well, which descends into the bowels of the earth!

We have no idea why the stepwell was built, but we do know, from inscriptions and descriptions, that it was originally bounded on three sides by the steps we see today, and on the fourth side, was a ramp. This dual use of steps and ramp allowed people of all ages, as well as animals, to approach the water.
Just as we don’t know why the step well was built, we also don’t know exactly when and why it fell into disrepair. It has been speculated (and in fact is popularly believed) that it was Mahmud Ghazni, who, on one of his many incursions, destroyed the temple, and looted the city. Whatever the cause, the city was abandoned, and the stepwell was forgotten. 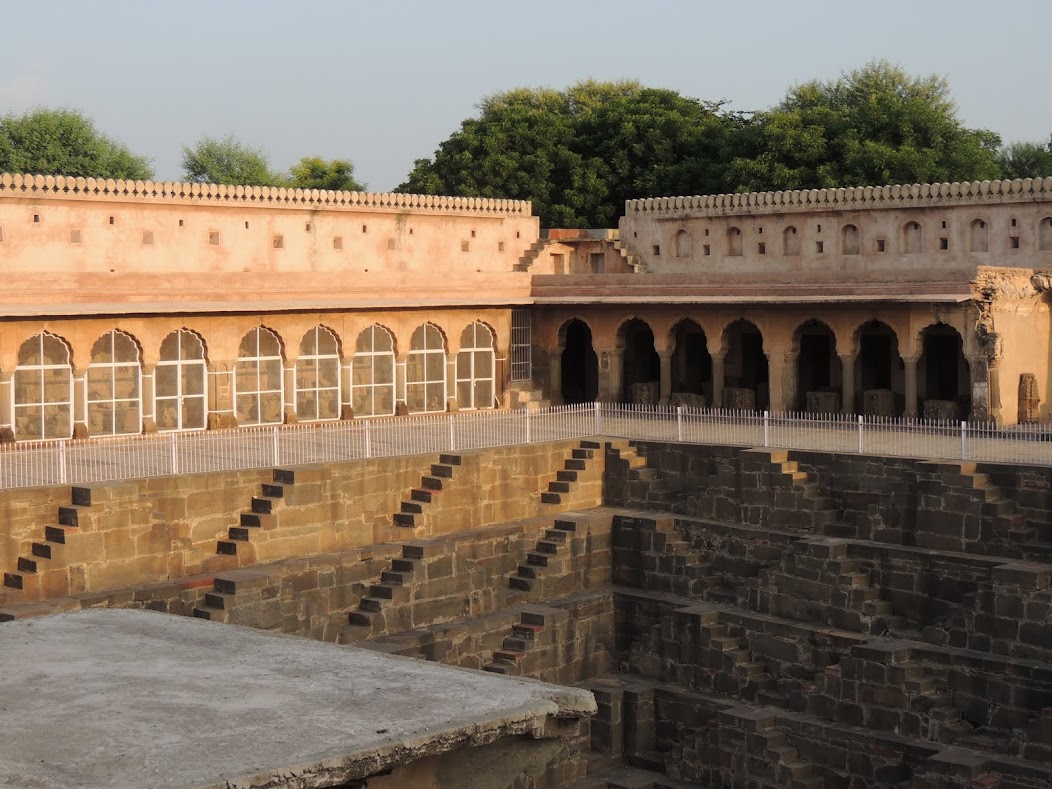 Centuries passed, and it was only in the 18th century that the stepwell and temple were re-discovered. Local lore speaks of a Brahmin minister of the Jaipur king, who was exiled, for some petty reason. Desperate, he left Jaipur and came here. That night, he had a dream, where the lord appeared and told him to seek out the buried well here. It would help him get back into the good books of the king. The Brahmin followed his dream, and started digging, and found this gorgeous stepwell buried under the earth. When the king came to know of this, he forgave the Brahmin and ensured that the well would be restored to its former glory. Further, he decided to build himself a summer palace here, which he did by covering up the ramp.

The palace, though a much recent structure as compared to the well, was just as interesting. It was built with the intent of pleasure, especially for use in the harsh summer months. Though we weren’t allowed inside, our guide told us about an old water wheel, which would have been used for raising water from the well to the level of the palace, for use as a fountain!

The king also re-built the temple with remnants of the pillars lying around, and installed an idol of Lakshmi, the consort of Lord Vishnu, and the goddess of wealth. He called her ‘Harshat Mata’, the mother who bestows happiness. In due course, even this idol disappeared, and has since been replaced by a shiny marble idol of the goddess. Remnants of the original temple are all over the place, pillars lying around the present temple, and the more beautiful sculptures placed in the space around the stepwell.

We had many questions as we listened to the stories.  Our guide, an employee of the ASI which maintains the site, had answers to all of them. He described ancient techniques of drawing out water so that steps could be built far below the water level; he showed us the sculptures and their many details we might otherwise not have noticed and he spoke of the tragic accidents which had induced the building of railings all around the well. Sadly, we aren’t allowed inside the well or the palace. The gates are opened only on special occasions, when locals come to bathe here.

Walking around, listening to the stories, we watched the play of light on the steps, fascinated by the way the patterns changed as we moved around.

However, even more fascinating were the sculptures from the temple, placed here for safety. The sheer variety and detail has us enthralled, trying to identify the different deities from their iconography – A dancing Ganesha, Surya sitting on his chariot drawn by seven horses, Krishna lifting the Govardhan Mountain, Balarama with his plough, Chamunda in her terrible form, Skanda or Kartikeya with his peacock, a gorgeous panel depicting Mahishasuramardini (Durga slaying the demon Mahisha), and the trinity of Brahma, Vishnu and Shiva on a single panel, among many others. There were other figures too, such as a beautiful panel depicting a queen being bathed, and a king riding his horse.

Moving on to the temple, it was a staggering sight to see the number of pillar fragments piled all over. Considering that these were the pieces left over after building the current temple, I couldn’t even begin to imagine how huge the original temple must have been! Even among the pillars, the wealth of detail was amazing. Our guide pointed out intricate details on the pillars, which ensured that every single one was unique!

Also on the temple walls, were sculptures of couples, sometimes in amorous postures. These are considered auspicious images, and are filled with symbols of good omens and fertility, such as fruits, plants, and overhanging creepers, along with well-endowed women.

On the outer walls of the shrine were deities, such as Agni, identified by the flames around him, Vishnu on Garuda and Indra with his elephant.

A herd of goats wandered into the temple, overturning a bag of grain, and our guide rushed to shoo them away. While my son busied himself ringing the temple bell, I just stood and wondered about the temple. It must have been a grand structure once, and certainly a royal one, going by the intricacy of the work. Recent archaeological excavations have suggested the presence of a city here, probably the capital of the kingdom. It must have been an important place then. But I wished I knew more. About those who had built the temple and the stepwell, of those who came here for water, of those who had patronised it. There must be more stories lurking all around, and I wished I could hear more of them!

Walking out from the temple, we stopped for a cup of chai at a small stall just outside the gate. A young boy sat nearby, making lac bangles. Sipping our chai, we chatted with him, watching him work, and listened to him talk about the foreigners, who were his main clients. Our guide, who had joined us, concurred. “It is only recently that Indians come here. And among those who do, most aren’t really interested. It is the foreigners who come and really see the details” they both insisted.

Even as I rued over the thought that we don’t appreciate our heritage enough, the young boy wrapped up the bangles I had selected in newspaper, and brought out a hand made cloth bag. “Those foreigners don’t like plastic bags, so I have made these” he said, and handed it to me with a smile.

It was a simple gesture, that spoke volumes. As I sit today, writing this article, the pink cloth bag is firmly entwined with my memories of the gorgeous sculptures, and the perfectly cut steps of the Chand Baori. Thus are memories made.

This article was originally published in Exotica Magazine, March 2017. Click here to read the original article.