The Royal Legacy of Bikaner

April 03, 2017
The story of Bikaner often starts with the disagreement between Rao Jodha of Jodhpur and his sixth son, Rao Bika. A stray comment by his father led him to the wild land ruled by the Jats, overcome them, and set up a new kingdom. The story is filled with emotions, replete with drama, politics and intrigue. However, there is another story as well – the story of Bikaner, seen over 500 years, through its art and architecture. 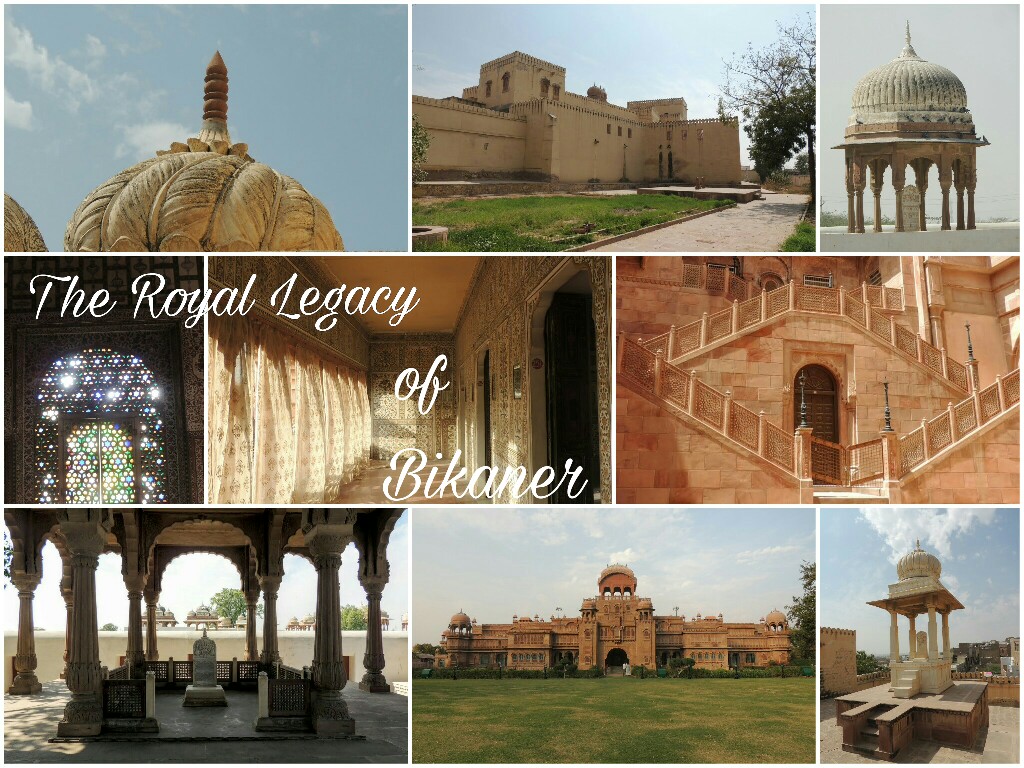 This story of Bikaner begins at what is now called Bikajee ki Tekree. This is the small fort first built by Rao Bika, sometime in the late 15th century, when he came to this region he had yet to name after himself. The fort was called Rati Ghati, and was built at the centre of the new settlement.


It is a small structure, with only a few small rooms for shelter, more practical than grand. There is little decoration seen, except in the main group of rooms which would have been used by the royal couple. Even here, only traces of the paint remain.

However, more impressive are these two small domes – with twisted ribs, which stand out against the otherwise stark exterior of the structure. These domes stand over two small rooms, which might have been shrines. We have no idea, sadly, of which deities they enshrined.

Two of the oldest temples of Bikaner – the Bhandasar JainTemple and the Laxmi Nath temple, stand nearby, and their presence testifies to the broad outlook of the king, who allowed people to follow their own religious beliefs, and build their own temples, while he remained satisfied with a small shrine within the fort for his own patron deity.

The huge walls enclosing the fort and the old city suggest that the early days of Bikaner must have been stormy, with the constant threat of war.

Rao Bika eventually managed to make peace with the Jats who originally ruled here. He married a daughter of the Bhati chief, thus establishing a family connection. Then, he made an alliance with the Nehra Jats who occupied this land, adding their name to his, and creating the new city of Bikaner.

To digress a little, at Narendra Bhawan, we saw exquisite bead work on cloth, which, we were told, is traditional in this region. It is a tradition which dates back to Rao Bika’s marriage, when the locals presented their gifts to their new king, covered with cloth decorated like this. The patterns we saw were more recent, from the time of the marriage of the last king, but it is interesting to see how traditions continue to exist to this day!

Getting back to the story, for over a hundred years, Rati Ghati was home to the kings of Bikaner. As the years passed, they consolidated their position, making strategic alliances with the Mughals.

The sixth king of Bikaner, Maharaj Rai Singh was an army general during the reign of Akbar and Jehangir, and, in reward for his many conquests in Mewar, was rewarded with the Jagirs of Gujarat and Burhanpur. The large revenue earned from these Jagirs is clearly evident in the grandeur of the new fort he built at Bikaner.

The new fort built by Rai Singh in the late 16th century was called ‘Chintamani’, though we know of it today as Junagadh Fort. This is one of the very few forts built on plain land, with only a deep moat and high walls for security. Later kings added to the fort, highlighting their own aesthetic sensibilities through the design and decoration. The eclectic art and architecture makes this one of the most beautiful forts in the country. Besides, it is also one of the best maintained forts, adding to its allure.

The art at Junagadh Fort, and its opulence clearly reflects the importance of the Kings of Bikaner during that period. The Phool Mahal is the oldest part of the fort, built by Maharaj Rai Singh. The paintings on the ceiling, depicting stories of Krishna, speak of the Vaishnavite beliefs of the kings, and the growing interest in miniature paintings, which Bikaner is well known for.

Maharaj Anup Singh’s exploits in the Deccan in the late 17th century, are seen in the intricate, and highly delicate Usta work in Anup Mahal, as well as Karan Mahal, built in the memory of his father.

Maharaj Gaj Singh’s aesthetic sense in the 18th century, combining the traditional Rajput and Mughal styles, is visible in the Gaj Mandir, which is said to have been constructed under the supervision of an architect specially brought in from Jaipur.

With the decline of the Mughals, the kings of Bikaner aligned with the British, who were now growing in power. Already seasoned warriors, they assisted the British in the Afghan wars, and even the uprising of 1857. Growing in power within the British Empire, the rulers of Bikaner were among the first to bring modern amenities to their own land. Maharaj Dungar Singh is credited with building the first hospital, school and college in Bikaner, setting up a police force, and bringing electricity to the city. The first lift was installed in his palace, which combines traditional patterns, against a stark white background, which gives an idea of his modern sensibilities.

Maharaj Dungar Singh also built the Badal Mahal, where the walls and ceilings are painted with clouds, with rain depicted at the base of the walls. This depiction of clouds on ceilings is a characteristic style of monuments in Bikaner, seen in all temples of the period.

Bikaner reached its peak during the reign of Maharaj Ganga Singh (1887 to 1943), whose achievements can fill pages. He was an ADC (Aide-de-Camp) to the Prince of Wales, later King George V, and assisted the British during the First World War, earning many laurels along the way. He was a visionary, who invited merchants from far and wide to Bikaner, built them Havelis at nominal costs, and made Bikaner the hub of business. He was responsible for the Gang Canal, which solved the perennial water problem, and supplies water to the city, till this day! He built schools, colleges, hospitals and medical schools, improving the quality of life for the citizens of Bikaner. His modern outlook, and tastes, as well as commitment to tradition, are seen in the palace built by him, the Ganga Niwas Palace, designed by Sir Samuel Swinton Jacob, which is a blend of traditional and European styles.

The Ganga Niwas Palace is now a museum, housing memorabilia of Maharaj Ganga Singh, as well as an extensive armoury, and means of transportation used by the royal family over the centuries. The Durbar Hall, however, is maintained as it is, with the sandalwood throne, which is said to have been brought from Kannauj.

This hall, at first glance, has a typically European feel, with its massive arches. However, the jharokhas, and intricate carvings of floral patterns, as well as Hindu deities, reminds us that this is the palace of an Indian king.

A set of paintings on the inner wall of one of the courtyards clearly shows the change brought about in Bikaner during the period...

At the bottom is an elephant drawn carriage, and above it, a boat, probably representing the canal, and right on top is a train, showing the gradual change in transportation in the region, and improvement of infrastructure.

With the changing times and the arrival of the 20th century, the Junagadh fort was considered too old for a king of Ganga Singh’s stature. A new palace was built, also designed by Sir Samuel Swinton Jacob, and named Lalgarh Palace, in honour of his father.

A second wing, named Laxmi Niwas was constructed next, and later, a third wing added. Today, both, Lalgarh Palace and Laxmi Niwas are heritage hotels, while the third wing is used by the royal family, when in residence. All these palaces are grand and opulent structures, combining  Rajput, Mughal and European styles.

From the Bikaji ki Tekree to Junagadh Fort, and the three palaces, the royals of Bikaner did come a long way.

Later kings, from some time in the early 16th century, are memorialised at the Devi Kund Sagar.

The cenotaphs of the kings are simple, with a memorial stone carved with the image of Vishnu and Lakshmi, their patron deities.

The women have even simpler memorial stones, with just a pair of footprints.

Unless they committed Sati, in which case, they have a memorial stone as well! The other queens might be forgotten, but these queens, who gave up their lives with their husband’s death, are remembered even today, and worshipped by the locals.

The saddest memorials are those of children, who died in infancy, who don’t even merit a memorial stone, but just a square depression in a marble slab!

While these are all memorials of death, they celebrate life as well, with beautiful paintings, especially of Krishna, on the ceilings!

Among all these traditional cenotaphs, some stand out, like this one, built in 1959, of Mehtab Kuwarji, the wife of Maharaj Dungar Singh, whose modern design sets it apart!

This then, is the royal legacy of Bikaner – a legacy of confluence, of blending of different ideas, thoughts and styles, a legacy of tolerance and assimilation.

Disclaimer: I visited Bikaner twice, the first time with my family, and then, on an invitation from Narendra Bhawan. The second trip was special, not only because of the stay, but also because of the insight which made our explorations more meaningful.

This post is broadly based on the Royal Explorations trail with Narendra Bhawan, which takes us through the 500 years from Bikaner’s creation, to its merger with the Republic of India.

I found the stories fascinating, especially of the different kings and all they accomplished. While I was awed by Junagadh Fort, I was riveted by the cenotaphs, especially the paintings on their ceilings. I have tried, through my own words, to understand the journey of Bikaner in these 500 years, through the kings, and their art. I hope I have managed to convey, and transmit some of my enthusiasm to you, with this post!