Waders and Other Water-Birds --- A morning at the Sewri Mudflats

February 14, 2010
The first time we went to see the Flamingoes of Mumbai at Sewri with the BNHS, we were enraptured by these beautiful birds, and were surprised by the number of birds, not just flamingoes, which arrived in this crowded metropolis! Since then, we twice lost the opportunity of joining the BNHS on their bird watching trips, due to prior engagements. I had lost all hopes of seeing these birds again this year, but thankfully, Adesh Shivkar of the Mumbai Bird Club announced a birding trail to Sewri this Saturday, and I jumped at the chance to take Samhith along on another bird-watching jaunt.
This time, I also roped along my friend, Usha, who will shortly be shifting to . She had to go somewhere else, but agreed to join me and Samhith for at least a couple of hours. So, the three of us set off at the break of dawn to see what and how many birds we were able to identify!
The very first sight that met us at Sewri was a sea of pink, the flamingoes much closer than they were, the last time. There also seemed to be many more, and it was a real riot of pink as far as we could see!
There were many smaller birds too, and to our untrained eyes, they all looked like sandpipers or plovers. Only when Adesh showed us the birds through the telescope and showed us their individual characteristics that set each of them apart, did we realize that what we had imagined to be just one or two varieties were, in fact, more than 10 types of waders! By the time we were through, I was sure that I had grasped just the tip of the iceberg, and there was much, much more to learn! So, now I had better make time to attend a few more such birding trails!
Here are my images of the wonderful morning spent at Sewri. My camera isn’t a great one, and neither am I an accomplished photographer, so there images are quite hazy and not all that clear…….. To top it all, the sun was playing spoilsport, and adding to it was the smog which has become a permanent feature of the Mumbai skyline. So, please excuse the quality of the images……..This trip has just heightened my desire to own a DSLR, and I am sure that I shall not be able to contain the temptation for much longer. Till then, you have to be content with my simple Canon Powershot, and what I manage with it!
I took so many pics of the flamingoes, since we were absolutely fascinated by them, and especially because they were so much closer than last time, and we were able to see them clearly without even binoculars!
The rising sun welcomes us to the mudflats... 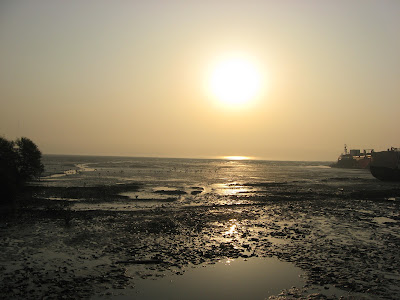 A pair of egrets enjoying themselves.... It was a wonderful sight! 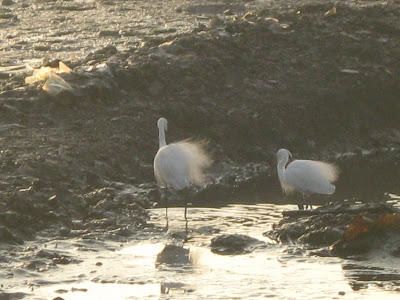 There are at least four birds in this pic, and I think they are all different!!! 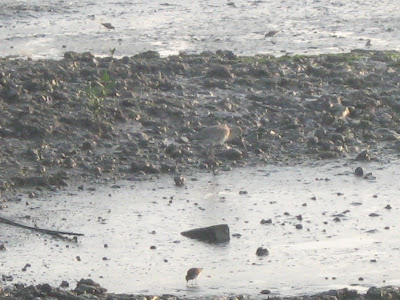 These tiny birds are perfectly camouflaged! 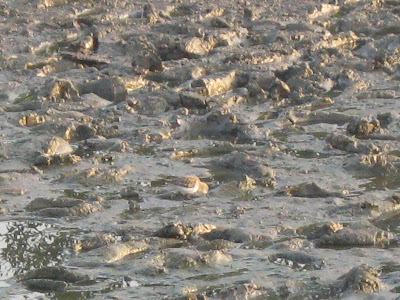 A group of lesser flamingoes.. 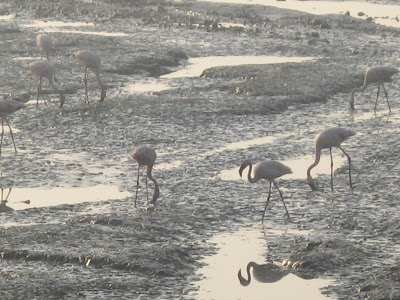 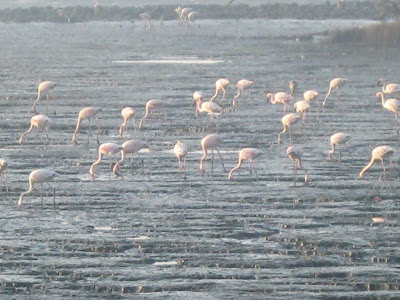 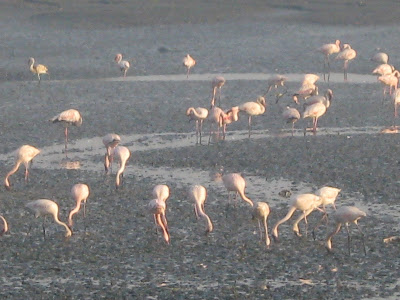 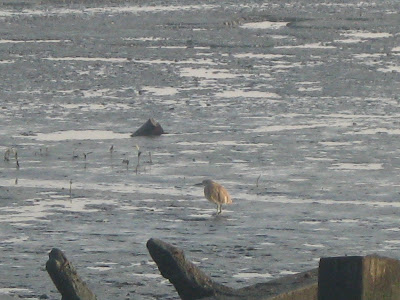 Now, this one is a Little Ringed Plover. I took this pic immediately after Adesh showed it to us through the telescope, and I clicked this one... Thanks to him, this is one of those little waders identified! 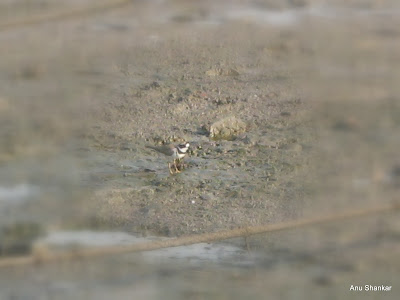 And this one is a Western Reef Egret! It was the darkest bird around. Unfortunately, thanks to the ship anchored there, I wasn't even able to get a decent pic of this large bird! 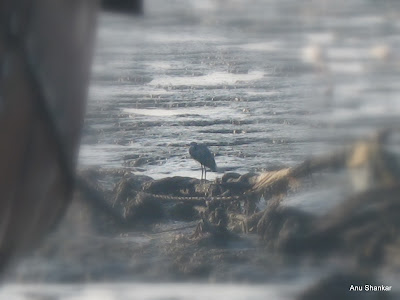 That's a sandpiper..or a Black-Tailed Godwit.. which one? I have forgotten! 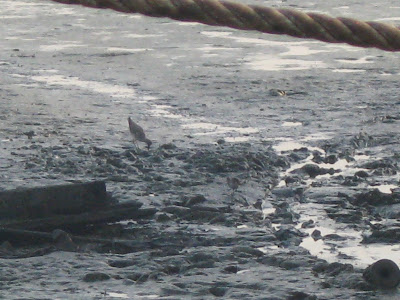 More Flamingoes...I told you, I went nuts clicking them all the time.. and this is just a fraction of the ones I clicked! 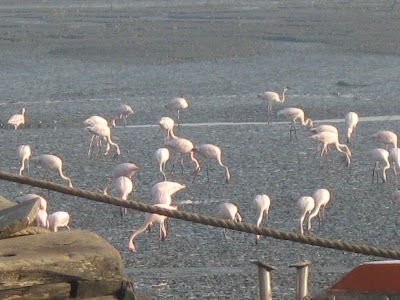 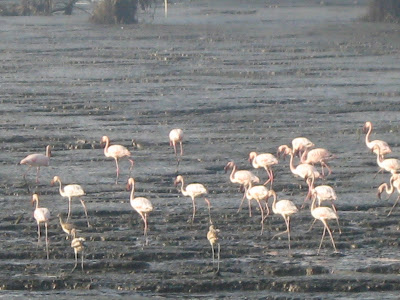 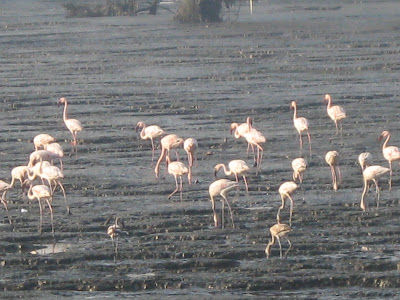 A mechanical bird which hovered over us for a while..... Wonder who was the VIP? 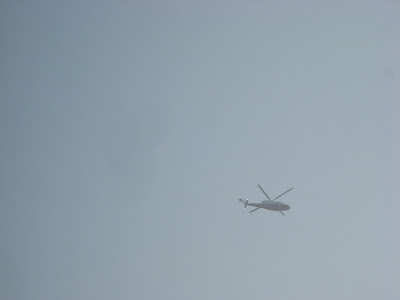 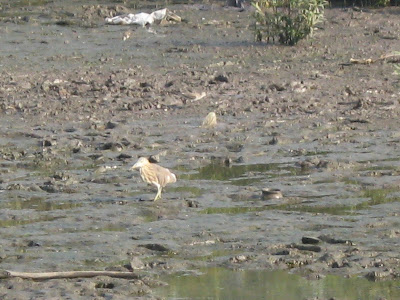 We saw so many birds as I said earlier, and I shall not even try to name all of them. Here is the list of birds that we did see. This is a list which Usha jotted down while Adesh was helping us identify them, and I picked it from her to add it to my blog. I have added the name of the bird to the pics when I have been sure of them. As to the others, as of now, they are simply waders – many types of them!!!!!

The last thing we saw wasn't a bird, but a crab - The Fiddler crab! 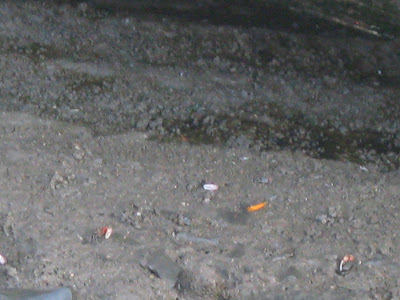 Can you some white things scattered here and there? three to be precise? Well, those are the pincers of the Fiddler Crab. The crab itself is under the surface, and it has one set of long pincers while the other is short. These are the longer ones sticking out, probably in search of food! Wish I could have got a better picture. But as of now, this is what I have to make do with.

Finally, a decent pic..... where I can identify the bird clearly as an egret! I clicked this one as we were leaving. 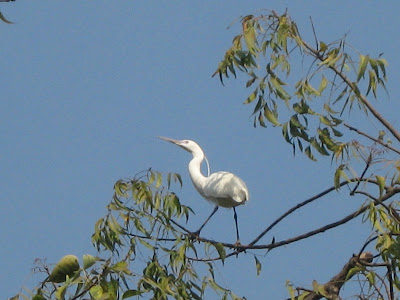 We had to leave early, thanks to Usha’s programme as well as Samhith’s hunger. After all, the poor chap had woken up early on a holiday. It wasn’t fair to deprive him of his breakfast too! But as we left, Usha summed it up well when she said, “Thank God we came! If I hadn’t, I would have regretted missing such an experience just to catch up with some sleep!”
You can read Usha's post on the same trip here.