This is one of Samhith's latest creations - he has just learnt to draw!!! Yes, at the age of 6 and a half, it is indeed a bit late, but he has never been interested in drawing or colouring! "Why should I want to draw or colour?" has been the refrain for so long! He couldn't even colour properly, let alone draw anything!
Then, suddenly, last month, he brought back a perfectly coloured sheet from school, telling me that one of his friends had helped him out, teaching him how to draw within the boundaries! I can never thank the little girl who helped him out enough!
And then, imagine my surprise when he brought back a note from the teacher, informing that he was to participate in a drawing competition! So, we spent Sunday morning drawing a school bus, which was the topic given. This drawing below is the one he drew by himself, as a sort of trial, and then he drew it finally on art paper, which he has taken along with him to school.
I wanted to take  a pic of the final drawing, but with one thing and the other, we somehow missed it, and it has now been sent off to school. But this, his very first effort, deserves a mention on my blog, which is where he now looks for appreciation...
A special thanks to Sudhir, Usha's brother, who has been instrumental in encouraging Samhith to draw. The poor chap has spent so much time with him, giving into his drawing demands, but also trying to get him to do his bit.....


So, guys, please take a look, and leave your comments for the  little chap! 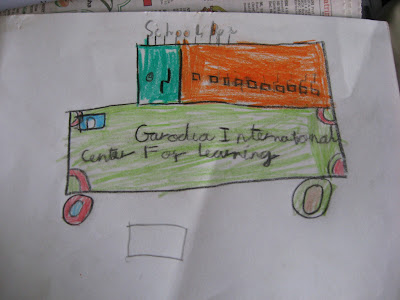