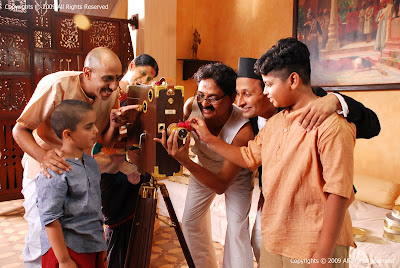 I am not a very regular film-goer, and actually go to see a movie only when I am sufficiently enthusiastic. The one film I had been looking forward to watching on the big screen was 'Harishchandrachi Factory'. I wondered if it would actually arrive at a theatre near me (considering that most award winning films don't really make it to the suburban theatres), and when it finally did, last week, I found myself too busy to go and watch it!
This afternoon, when Shankar suggested a movie, I opened the paper, only to find not a single mention of the movie anywhere! Finally I turned to the internet, my only source of information these days, and thankfully found it playing at a theatre not too far! We jumped at the chance, and booked tickets at once! As it happened, we need not have bothered - the theatre was almost empty! There were just a few families like us, most of them Maharashtrians, I may add!
Samhith for once was least interested in the movie -

1.Because he hadn't heard about the movie from his friends already! (And here, I think it would be appropriate to add that the kind of movies he hears about in the school bus are, of all things, 'Jail' and 'Wanted'!!!! and I am talking of kids who are between 6 and 10 years of age! When I asked him if they had seen these movies in the theatre, he calmly replied, "No, amma, they see all movies on CD!!!!" So much for the A Certificate!!!!! )


2.Because he asked about the name and I told him it was in Marathi. Much as I tried to explain to him that he would understand the movie, he refused to believe me.

Now for the movie itself - I don't think I need to relate the story. There has been enough of it in the papers. If, by chance you haven't heard of it, you can check out the story, trailers, etc on the movie website. This post is simply an attempt to express my feelings on seeing the movie.


It is certainly one of the best movies I have seen in a long time. A movie which tells us about the struggle and the life of a man who, so to speak, gave birth to Indian Cinema, but whom few remember today. He remains a name in GK books, from which children simply mug up names and dates without any interest or appreciation whatsoever. This is a movie which talks about the man's struggles and his dedication, his values and his dreams, his family and his neighbourhood, the struggle for independence in the background running parallel to his own struggles to make his dreams come true...... and all this in a light hearted way..... It brings tears to your eyes, but you leave the theatre with a smile on your lips and hope and happiness in your heart, and also a confidence, that yes, dreams do come true....... In short, the movie brings Dadasaheb Phalke to life, and makes you feel proud to be his co-patriot!
As to the language, well, the version we saw had no subtitles, but there was no need of any... Even Samhith laughed at all the right places. It just goes to prove that language is no barrier to anything, and most of all, feelings. After all, the movie that this one is based on - Raja Harishchandra, the  first Indian movie, had no voices at all! Yet people understood and appreciated the movie! You really do not need words to convey emotions, do you?
I am not a film critic, and am hardly competent to judge the actors or the director, or for that matter any of those who were involved with it, but the movie struck me as being amazingly coherent. The story, the dialogues, the characters, each one of them seemed perfect, and it is this coherence which I feel lacking in many of the movies I have seen recently.
When I returned home, I spoke to about 5 people, of which 3 hadn't even heard of it! And 2 of those were those who regularly went to see movies! And one actually asked me why I had gone to see a Marathi movie! That tells us the state of our audience today, and explains probably why such award winning movies rarely do well. I could not wait to get home and start writing about it, so that more and more people can go and see this. After all, it is even Tax-free now!!
Rarely do we get to see such wonderful Indian movies. Do not miss it! And if you have seen it, I would love to hear your opinion too!