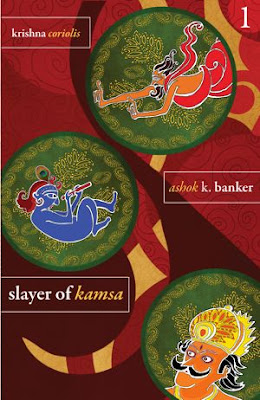 Anyone who knows me knows that there is no gift dearer to me than a book! And when I get a signed copy of a newly released book from the author himself, it becomes the best possible gift ever! When I commented as usual on Ashok Banker’s blog, I didn’t even think of the contest he had running, and winning a copy of his latest book - Slayer of Kamsa - Book 1 of the Krishna Coriolis -  was just too thrilling for words. It arrived just after Diwali, and was the first thing I laid eyes on when I returned from my Diwali holidays, and it really made my day!

I hadn’t even heard of Ashok Banker till I stumbled upon his Ramayana series. I rented the first book in the series from Librarywala, wondering what it would be like. I was hooked from the first page, and just couldn’t keep it down! In fact, I remember that of the six books in the series, I managed to rent five from the library, but the sixth wasn’t available, so I placed a request for the book. However, I was unable to get the book out of my head, and rushed over to read it at Crossword. And then, when I had read the complete series, I bought the books and read them all over again! I hope to pass on the books to Samhith one day and have a wonderful conversation about them someday.

Having read his books, it was obvious that I would search for him on the net, and soon found his blog, which I have been following for a while, keeping up with his latest releases, looking forward to reading more of mythology from his perspective.

As epics go, the natural thing to go for, after the Ramayana, is the Mahabharata. Ashok chooses to write about Krishna – surely the most important character in the Mahabharata – before coming out with the whole epic itself. He calls this series the Krishna Coriolis.

I was intrigued by the name, especially since it reminded me of something I had learnt long back in Physics.  According to what I recollected with a little help from Google, "The Coriolis effect is the apparent deflection of moving objects from a straight path when they are viewed from a rotating frame of reference.” What a beautiful way to describe a story which has been passed on from generation to generation by word of mouth alone, each generation viewing the story from its own frame of reference, thus subtly altering the story with every retelling!

The book cover is interesting too, showing Narada, Krishna and Kamsa, each of them enclosed in a green bubble. They are, after all, the main characters of the story –Narada informing Kamsa of his impending demise at the hands of Krishna, thus setting in motion the entire drama which we are all familiar with!

The book is fast paced and typically Ashok Banker. He writes of an age gone by, easily mixing Sanskrit, Hindi and other vernacular terms with perfect English, resulting in a jargon which is so typical of us Indians. Every time I read one of his books I wonder how many of us actually speak in a single language these days, let alone perfectly! I myself use a mixture of English, Hindi and Tamil, now mixed with a bit of Marathi as well, and, considering that there are so many words in each language which can never be as fully explained in any other language, certainly not English; it is inevitable that we mix up languages as we speak.

The story of Krishna is something we all know. Even Samhith can recite the entire story well, and knows the name of every rakshasa Krishna killed as a child! What stands out in this book is the characterization. Ashok’s Ugrasena is much like what I have imagined him to be – the king who pampers his first born, while being busy with his reign, barely paying attention to his erratic ways, pardoning all his mistakes, hoping that he would grow up to be responsible, and then wondering why his son turns out to be an ogre! The surprise in the book is Kamsa’s mother – Padmavati – who usually never even finds a mention! Again, he portrays her as the loving and forgiving mother who turns a blind eye to her son’s faults, which is no surprise. Kamsa himself is very well portrayed, right from the overgrown teenage bully to the full grown rakshasa. The depiction of the emergence of Kala Nemi was a real surprise though, and I wonder if those who haven’t read the Ramayana series can grasp the importance or the significance of this. It does fit in perfectly with the story, and fills in quite a lot of gaps in the story that we are all familiar with.

However, what really sets this book apart is the depiction of Vasudeva. In most renditions of the story, he is nothing more than a pawn in the hands of the Devas, blessed with the privilege of being known as the father of Krishna, but cursed with years of imprisonment, torture, and the anguish of seeing six of his sons killed by his brother-in-law.  Here, he takes his rightful place as the leader of the Vrishnis, one who is adept with the sword as well as his tongue, but most importantly, as a man who truly believes in non-violence. The encounters between Vasudeva and Kamsa are especially well written, and form the focal points of the book. Even after reading the book twice, I found myself turning back to these pages and going through them again!

Surprisingly, it is the prophecy, which is usually the highlight of the story, which somehow takes a backseat – overwhelmed by all the other action happening around. Narada for once gets depicted as a powerful Saptarishi, not a Tambura - twanging sanyasi who has no better job to do than going around inciting people!
Among the loads of other characters, Jarasandha is another strong one, one shown capable of leading (and taming) even the worst of the demons! I especially liked the parallels one can draw from the portrayal of Jarasandha and his allies, with the threats posed by the ruthless dictators of the present day.

I can go on and on about the book, but had better leave you something to read by yourself. For those of you who would like to take a peep into the book, head over to Ashok’s blog where you can read excerpts. Like he himself mentions a number of times, his books are retellings of the epics, his own viewpoints, his version of the story, told in his own way. It might not necessarily appeal to all. So, before you decide to buy the book, do go through the excerpts to see if you like it or not.

Here is a link to the first one. There is a link at the end of the post to the second one and so on.
http://ashokbanker.com/2010/09/01/slayer-of-kamsa-excerpt/

And yes, if you do like the book, and read it, I would love to discuss the book with you. Feel free to comment and open an interesting discussion on the story.

And now comes the difficult part – waiting for the next book in the series – The Dance of Govinda!