A leisurely visit to Tirupati

November 18, 2010
We look forward to vacations to get away from our routine lives and de-stress, but planning a vacation is quite stressful at times too! First, there comes the ever present question – where to go! In a country like ours, there is so much to see and so much to experience that it is never easy to decide where to go, especially these days when I read so many travel blogs and wish I could visit all the places I read about. And then, there are all the places I have already visited, yet want to visit again….and again…. and again!
One such place I have visited umpteen number of times before (actually, I did count the number of visits, and it turns out that this was my 11th) is Tirupati. I first went there when I was about 8 or 9, and since then have gone there regularly, but somehow, the place beckons again and again. My last two visits were fleeting ones, where I barely had time to see the Lord, which left me rather unsatisfied. The desire to visit again was growing, and I finally convinced Shankar to join me and Samhith. Since Shankar’s schedule is rather erratic, and I wasn’t really sure of him coming along J, I also asked my mom and aunt to join us. Then came the really stressful part – making all the arrangements! Tickets were the first hurdle, IRCTC being what it is. Even 90 days in advance, I barely managed to get 4 tickets in three tier AC for the 5 of us. Thank God Samhith is still a kid and we could manage without getting him oneJ. For the return trip, we weren’t so fortunate, and had to settle for Second Sleeper, which was fine by us except for the huge crowd getting in and out at every station! 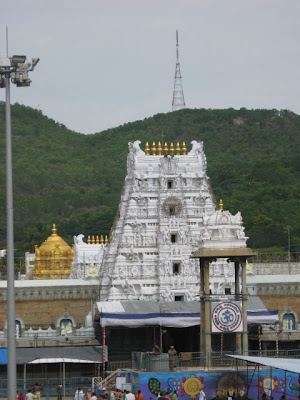 The Tirumala Tirupati Devasthanam (TTD) have made many arrangements for pre-booking, even online, for sevas, which help us evade the crowd, and for the last few years, we have never set foot on the hill without a seva ticket in our hand. This time however, the Lord had other plans, for I was unable to get anything suitable. Maybe it was the Diwali rush, but not one seva which I wanted was available. On an impulse, I decided not to book anything, not even rooms, and decided to go, totally leaving everything in His hands, completely believing that He wouldn’t let me down!
And he didn’t, for I had the best possible darshan in years, and that too without the usual pushing and shoving which is practically normal there these days. We had darshan twice – the first time we went for the free darshan and had to wait for about 5 hours, but it was worth it, and for once, no one pushed us or told us to move, as we stood in front of the Lord for almost a minute (those who have been there and experienced the crowd would know how long a minute is, when spent there J). Surprisingly, the same thing happened the next day when we went for darshan again, this time in the special sheegra darshan queue, except that this time we were out of the temple in less than an hour after we entered the queue! Quite a record on a weekend during the Diwali vacation, wouldn’t you say?
Now for the question that everyone has been asking me – why so long and what did I do there for 10 days? Well, I just wanted to spend time there so that I could see whatever was there to see… and no matter where you go in India, there are interesting places around. All we need is the time and the inclination. And of course, the knowledge of the places! I had been reading and hearing a lot about places – temples as well as other places around, and just wanted to see as many of them as I could. Besides, I didn’t want to strain myself and Samhith trying to cover too much in a day. I wanted to relax too. So that explains the question about ‘why’ ten days. As to what we did, well, here it is –
The day we reached Tirupati (the foothills), we took a room at the TTD’s Srinivasam Pilgrims Amenities Complex and visited the Govindaraja Swamy temple. It was almost evening by then, so we turned in early, hoping to get some rest, so that we could be ready for the next day.
The second day we started off early in the morning, all set to climb the holy hills. There are about 3500 steps, which typically takes about 4 hours. We took about 5 hours, stopping regularly and taking a lot of rest, reaching Tirumala in time for lunch. We took a room, again at one of the TTD’s numerous guest houses, had lunch and relaxed for a while before joining the free queue for darshan. By the time we returned, it was past midnight!
The third day was for relaxation, especially since my ankles were swollen up thanks to the effort of the climb. In the afternoon, we visited the Museum, which we thought would be a quick trip, but we ended up spending more than 2 hours there!
The fourth day we went off for darshan again, which as I mentioned earlier, was quite a quick one, and then spent the time before lunch roaming around on the hill. After lunch, we took a jeep and went to all the places to see around the temple. When we returned, we checked out of our room, descended the hill and took a room at Srinivasam again.
The fifth day, we visited Tiruchanur and Kalahasti.
The sixth day was for Samhith – we visited the Zoo and the Science centre, both of which occupied most of the day!
The seventh day was Diwali, and we took the TTD bus to 6 temples in the vicinity, all of which are managed by the TTD. The temples we visited are the ones at Karvetinagaram, Narayanavanam, Nagalapuram, Bugga, Surutapalli and Appalayagunta. This took us the whole day.
The eighth day we visited a temple I had heard of  - Gudimallam, as well as the Chandragiri Fort. We also managed a couple of local temples – Kapilateertham and Thondavada Agastheeswarar temple.
The ninth day, we took the APSRTC bus tour to Kanipakkam and the Vellore Golden temple.
The tenth day we left Tirupati to get back to our mundane lives.
Quite a lot of places, wouldn’t you say? My only regret is that I don’t have many photographs this time, since cameras are not allowed anywhere except the zoo and the science centre. So, for the next few weeks, be prepared to read a lot, without the visuals which usually accompany the words!
List of Posts ..