Most of you would know by now that I had been travelling for the whole of last month. Just before I left, I signed up for the ‘International Postcard Swap’ organized by Zoe of ‘Playing by the book’. It was a heaven sent opportunity to get Samhith more interested in writing, and also get in touch with some like-minded parents and kids!

Amidst two hectic trips, I just managed to download the list of people I had to send postcards to, and with Samhith too busy with his scrapbook, ended up writing to the families myself. Looking for the post office at Udaipur was an interesting experience, with the auto driver wondering why on earth an Indian tourist would want to go to a post office! “Madam, if you want to send a letter, there are many couriers around” was what I heard again and again before I insisted that no, I did NOT want a courier, but only the post office, before one of them finally consented to take me to a small old building hidden very near a circle we had been passing at least a dozen times a day! I managed to get the postcards off, but a couple of days later than promised, so Maria, Courtney, Emma, Kathy and Elaine, please, please wait a few more days for my cards to reach you…… of course, that’s if that tiny little post office actually did the work it is supposed to be doing J
Anyway, we returned home last week with Samhith still not enthusiastic about the cards we had sent, until the day before yesterday, when the first postcard landed in our mailbox! His enthusiasm suddenly shot to the roof, and it was a pleasure to see him reading the message and seeing the photo on the postcard with such concentration. The stamps only furthered the delight, which simply multiplied with the arrival of two more postcards!
The idea had been to include a book recommendation in each postcard, and we received a variety, from Enid Blyton to the Monkey King, Captain Underpants and Tinkerbell. However, the most recommended books were the Geronimo Stilton Series! I had been wanting to buy them for him for a while now, but wasn’t too sure if he would read them, but now he wants to, and I am nothing short of thrilled!
However, I was even more thrilled by the fact that he actually sat down to reply to each one of them with his own postcard and his own book recommendation. As it turned out, his handwriting only made it possible for him to write a sentence or two on every postcard, but it’s at least a beginning…. Wouldn’t you agree?
We received two more cards today, which brings the number to five, and as I write this post, he has already got all the postcards ready to send.
These are the postcards we received… 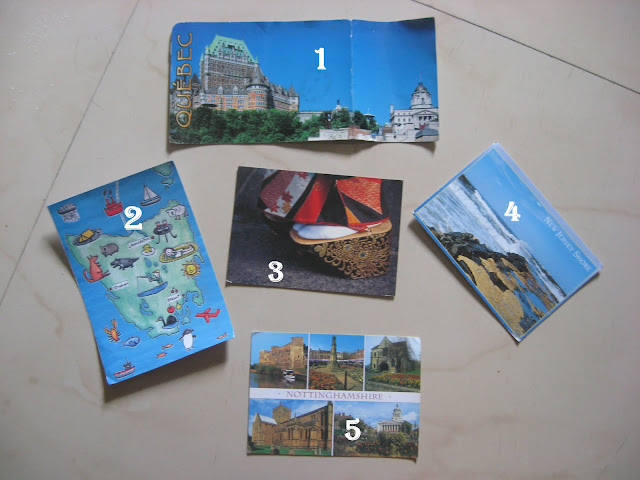 1. Rose and Ullysse Martin – Samhith loved your postcard, especially the fact that it could be folded and stuck!
2. Joshua and India – we were fascinated by how much you managed to write on just a postcard!
3. Hana, yours was the first card we received, and the one which got most of the attention!
4. Sam – What a coincidence ….you share a nickname with Samhith!
5. Frankie and Annalise – Samhith loved the beautiful old buildings on your postcard.
Thanks so much everyone! Samhith’s reply postcards will reach you soon (hopefully!).
But most of all, thank you so much, Zoe for this wonderful idea to bring families together from across the globe!