June 16, 2011
The town of Madurai is famous for many things. First on the list is of course, the Meenakshi Temple.But did you know that there is something else that the temple town is well known for? Jigarthanda! Made from milk, china grass, sarsaparilla syrup and ice cream, this is the south Indian equivalent of the Falooda, and is much in demand during the summer.

Jigarthanda was something I had never heard of, and neither had Shankar (which was surprising, considering the frequency with which he has visited Madurai and his interest in such things), but an in-flight magazine he had read on the way had an article on the beverage, and he was enthusiastic about trying it out. There were plenty of stalls and handcarts outside the temple selling Jigarthanda, but we hunted out a reasonably clean one a short distance away, and proceeded to treat ourselves. Samhith, who is normally reticent about trying anything new gingerly took one sip, and then went on to finish two glasses by himself! 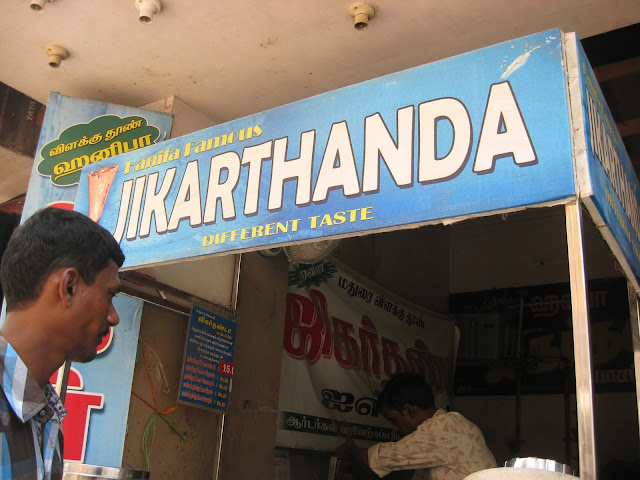 The beverage is usually called 'Jil Jil Jigarthanda' - which makes it sound more rhyming. Jil is the Tamil word for 'cool', while 'Jigar' and 'Thanda' mean 'heart' and 'cold' in Hindi. Obviously, the name implies that it is a drink which cools and pleases the heart, but I was fascinated with the name.
Tamilnadu is probably the only state in India which has consistently refused to accept Hindi as the national language, and in my experience, people avoid talking in Hindi even if they know the language. In such a situation, it is probably ironic that such a bastion of Tamil culture and anti-Hindi agitations should have its most popular beverage named in Hindi! Apparently, Jigarthanda was introduced to Madurai by its Mohemmedan rulers, which explains the origin of the name. 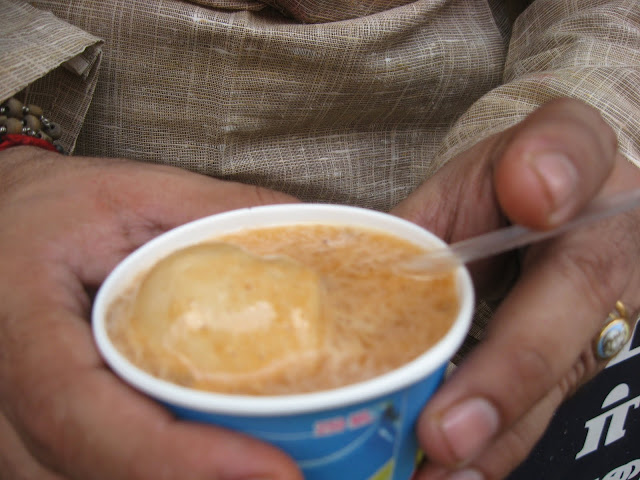 However, the beverage by any other name would still taste as sweet (with due apologies to Shakespeare), and its history and nomenclature do not matter. We all had so much Jigarthanda that morning in Madurai that we could put off lunch till late afternoon! The fact that the day was our ninth wedding anniversary only made it more memorable. A fitting celebration for a travel blogger - dont you agree?