June 15, 2011
While in Tiruppur, we decided to take Samhith to his first Tamil movie. It was also his first experience of the old fashioned single screen theatre, and he was surprised to see that there was just one huge screen in such a big place. The gallery surprised him even more, as did the cost of the ticket! The movie was ‘Ko’, one which has received rave reviews for its excellent cinematography and direction, and relates the story of a photojournalist dealing with the current political situation.
Since this was Samhith’s first Tamil movie, I was a bit apprehensive about how he would manage to follow the dialogues and if he would actually sit through the three and a half hour long story. I needn’t have worried, for the visuals were stunning and the action riveting enough to transcend the language problem, and Samhith happily sat through the entire movie, just grabbing my hand or hiding his eyes at intervals when the going got too rough! After the movie, he had just one question – “Amma, what is a photojournalist?”

This led to an interesting conversation, when I tried to explain that a photojournalist was a journalist who told a story without words, through his photographs. That got him thinking for a while, and then he asked – “Amma, are you a photojournalist?” Now that was a surprise, and when I asked why he thought so, he said, “But you take photos all the time, and on your blog, you write your posts with lots of pictures. So, why aren’t you a photojournalist?” Trying to get him to understand the difference between a journalist and a blogger wasn’t all that easy, but I managed to convince him in the end that I couldn’t really call myself a photojournalist. At least, not yet! That put an end to the discussion for that day.
Almost a fortnight later, we were at Mount Abu, and made a visit to Achalgarh. On the way, I suddenly noticed the skull of a buffalo (or cow, or ox, no idea what….) placed on a stick to act as a scarecrow. Our driver had hurried past, and I had no time to take a pic, but both, Samhith and Shankar wanted to see it, and I promised to point it out the next time I saw one. Just a few minutes later, I saw another skull, again in the middle of a field, but this time it appeared to have fallen off. I asked the driver to stop, and pointed it out. While I would have been satisfied with a pic of just the skull, Shankar had other ideas. He convinced Samhith to go one step further….Here’s what happened next….. 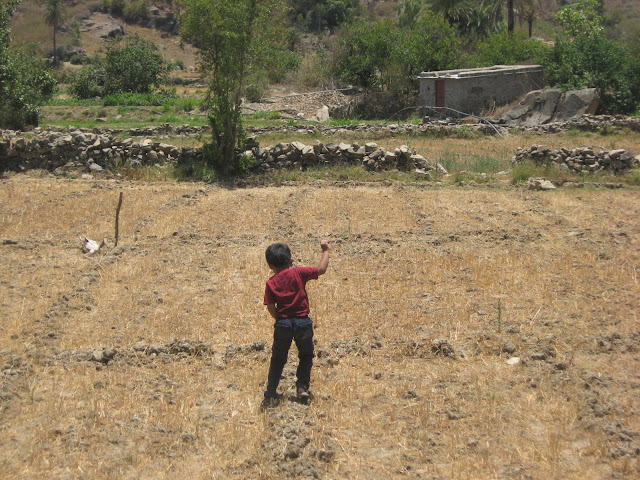 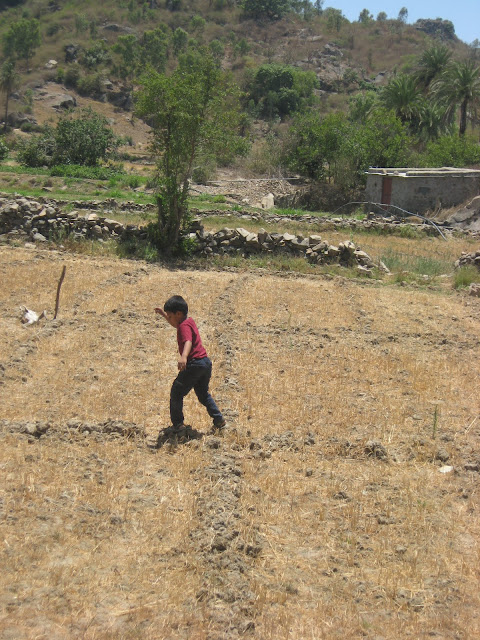 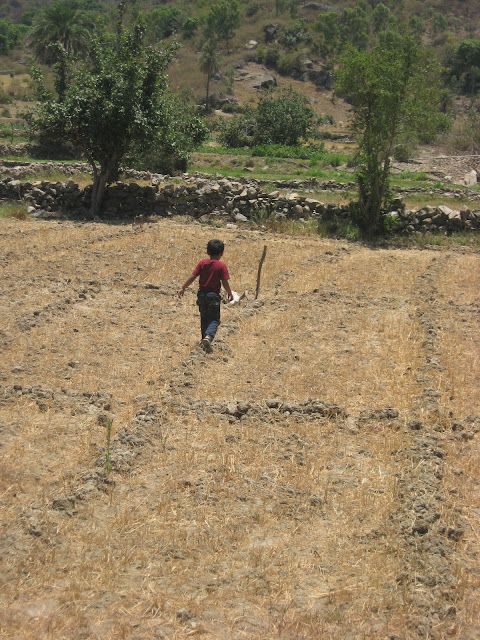 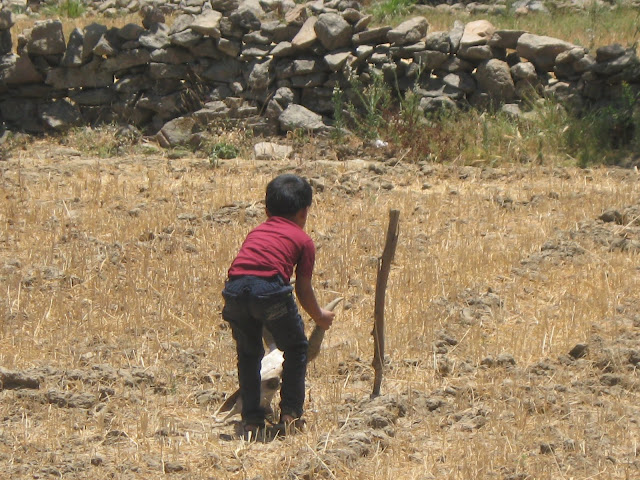 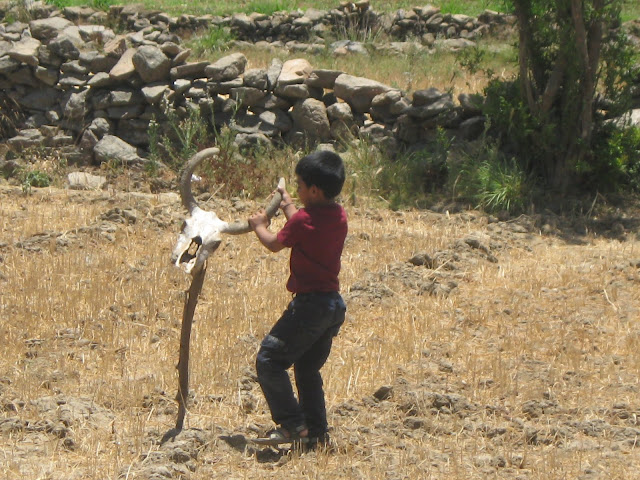 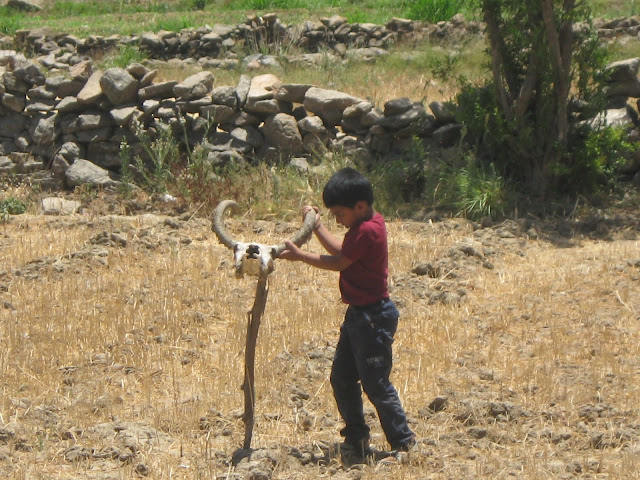 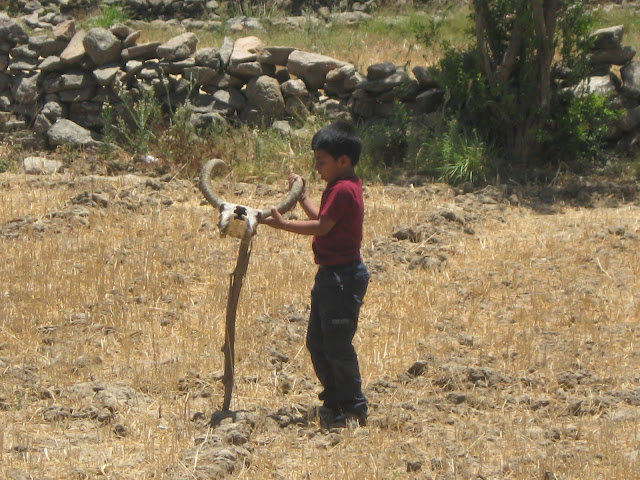 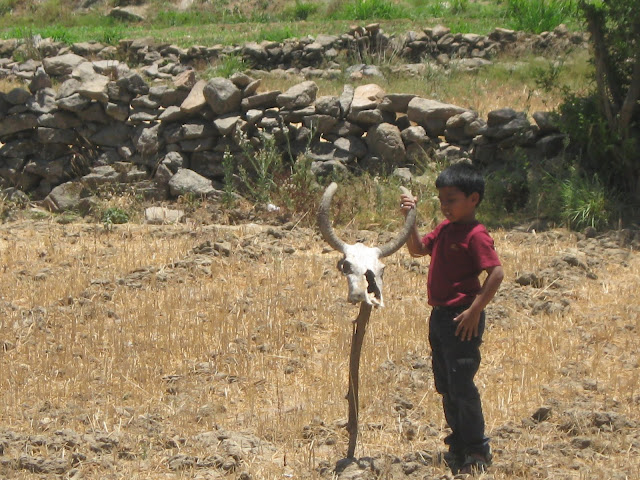 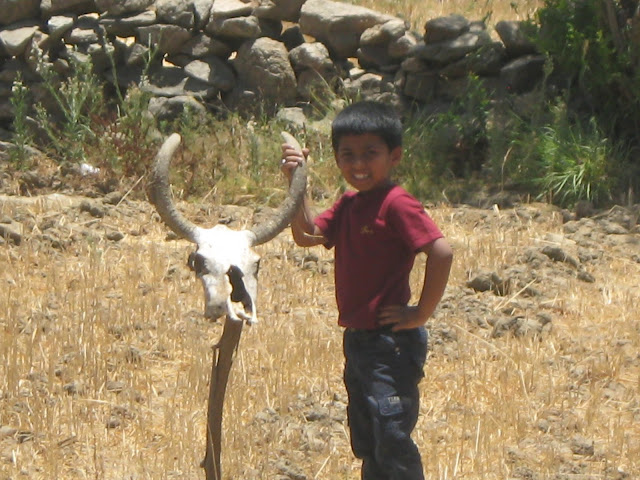 When Samhith came back, I showed him the photos I had taken. He seemed thrilled by the sequencing, and said, “Amma, you are now a photojournalist!” For once, I was absolutely lost for words!