August 08, 2011
Samhith's fascination for snails is well known to all those who read this blog! This monsoon was no different, though the enthusiasm has worn off a bit for me, and I refused to take pics of every snail we saw! He, of course, continues to look for them, and at last count, we had at least 20 big ones living among the bushes opposite our building, and numerous small ones (babies). The last time he tried to count them, he managed to go till about 80 before the bus arrived and he was forced to stop! That will give you an idea about how prolific the snails are at reproduction!! and also why they are considered pests!!! He has even started thinking of them as his pets, but which he leaves free to roam around, since he doesn't want to put them in a cage!! We have a variety of snails, ranging from huge ones about 10cm long, to tiny ones less than a centimeter in length! Here are some of them!! 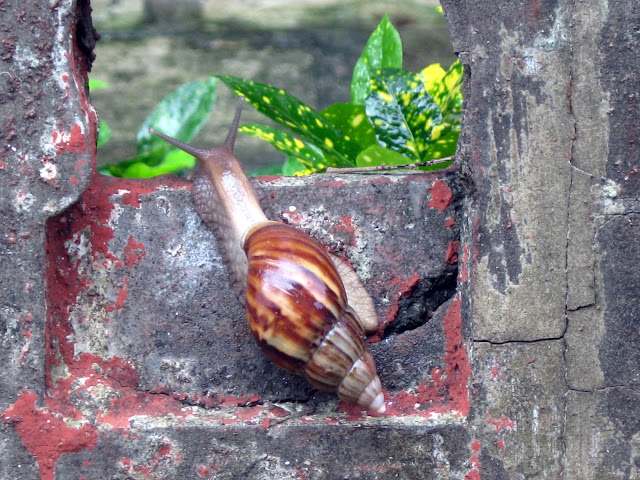 These are the most common snails we see. The shell alone is about 5 cm in length, and about 3 cm in circumference at its widest part. When the snail is out, the complete length goes up to almost 10 cm! These are just estimates.. (I have not got around to actually measuring them, though Samhith wants me to!!)

These are babies of the same variety, so are smaller, with about 3 cm long shells... 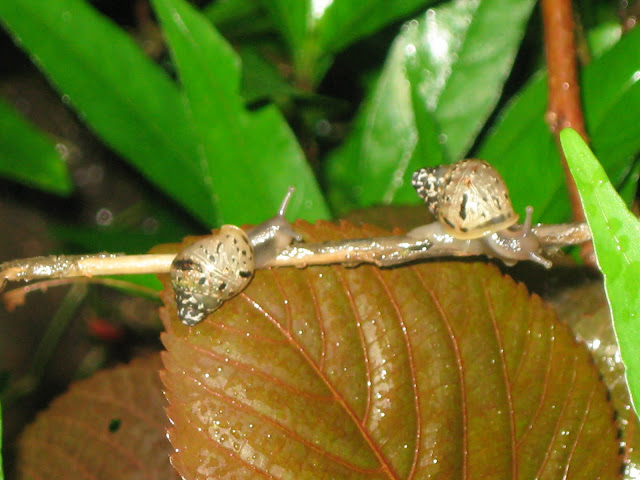 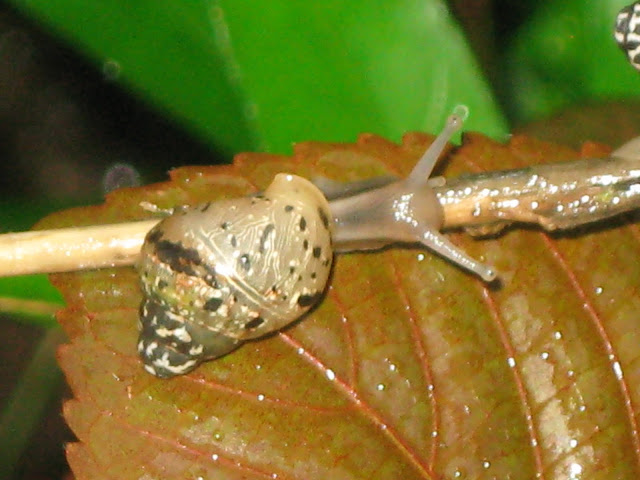 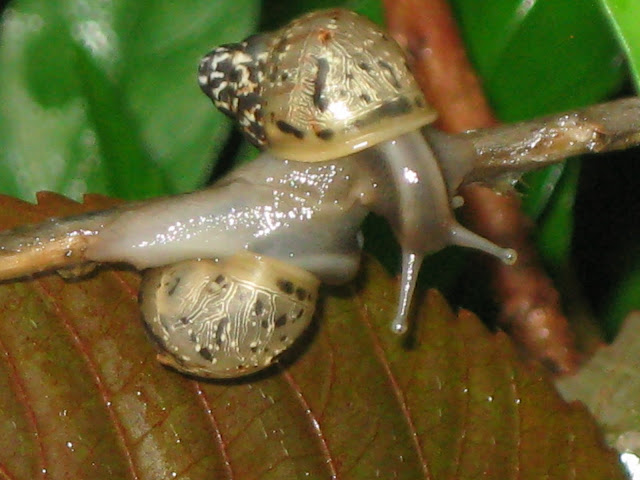 And we saw this one at the Maharashtra Nature Park. Samhith took the photograph himself! 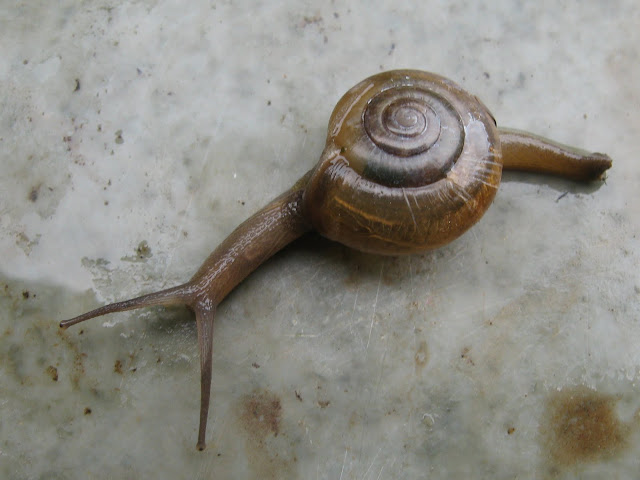 And now we come to the twist in the tale. We recently started a tiny kitchen garden at home with a few pots on our window sill (more about that later), and to our surprise, we found some really tiny snails in them!! These were less than a centimeter long even when they were out, and the shells too tiny to measure! Here are some pics...

Of the two snails in this pic, the larger one has a shell about a centimeter long! The second is half of that!!!

Persistence does pay off, for, after taking about a hundred pics, I managed to get some decent ones of them....these have been cropped and enlarged.... 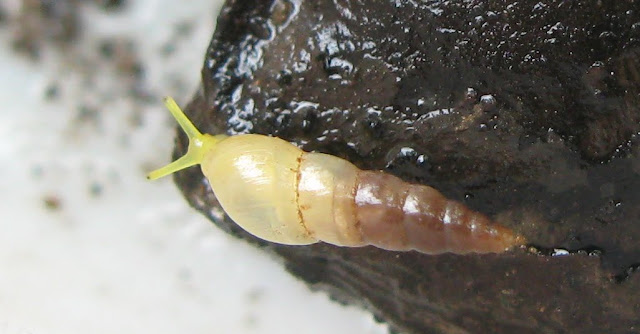 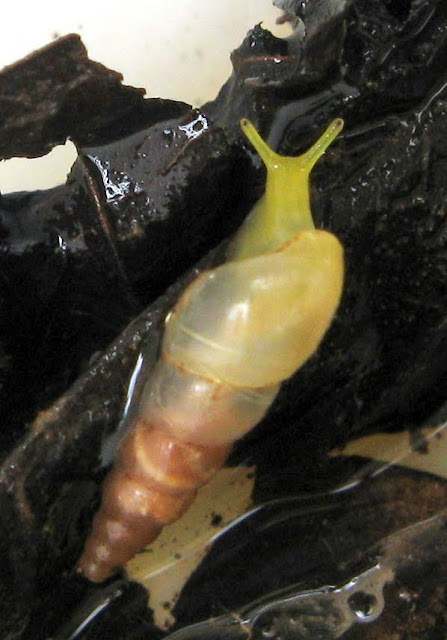 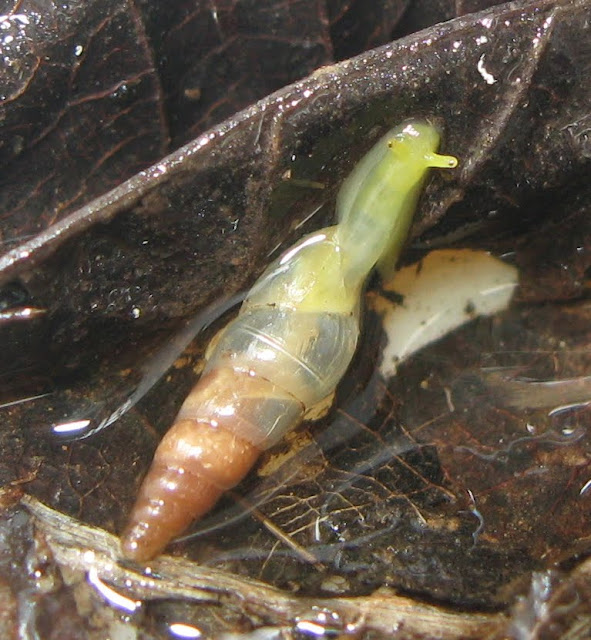 And now we come to the best part of the story..... We found a snail the other day on a leaf, which Samhith took to school, much to the amusement and entertainment of his friends! The fact that he actually touches it without a qualm makes him feel like a hero, which has encouraged him to 'collect' more!! Here is one which he found yesterday, brought it home, and has taken to school today!!! 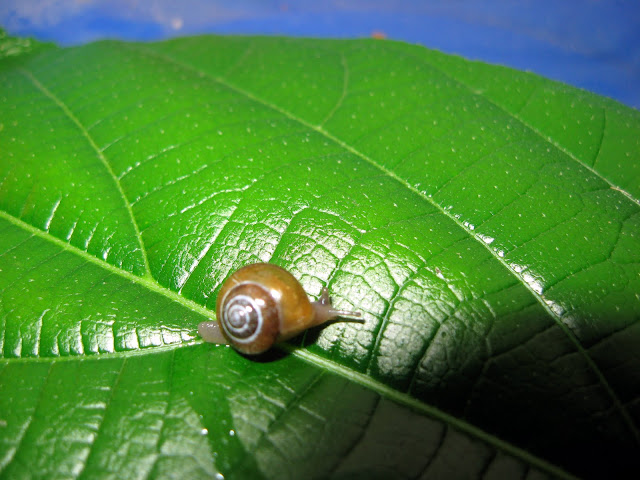 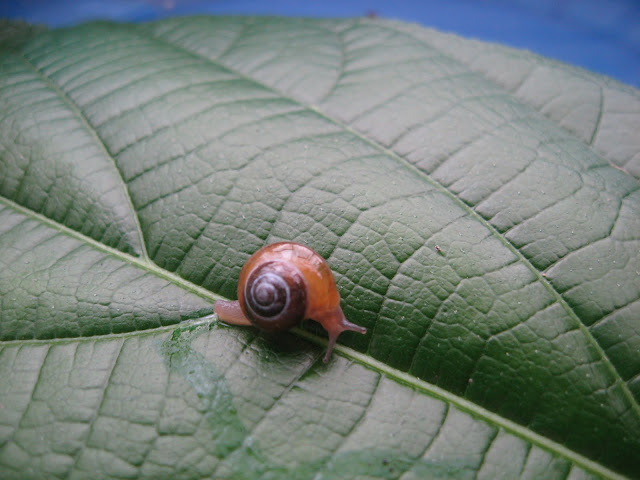 That Samhith likes snails and would want to take them to school came as no surprise, but that his friends would like them too, definitely was a big surprise for me!! Apparently, they have kept the snails among the plants in their 'pot culture' class, (wonder what will be their reaction when the snails eat up all their plants!!) and to top everything, they have even named it!!!! He is now a 'class pet' - of course, when the manage to find him, for, in Samhith's words, "He escaped through the window into the plant there, but we know he will be there, so its ok. He is our pet, but he is free!" Kids come up with the most interesting things, dont you agree?

Other Snail Posts on this blog: