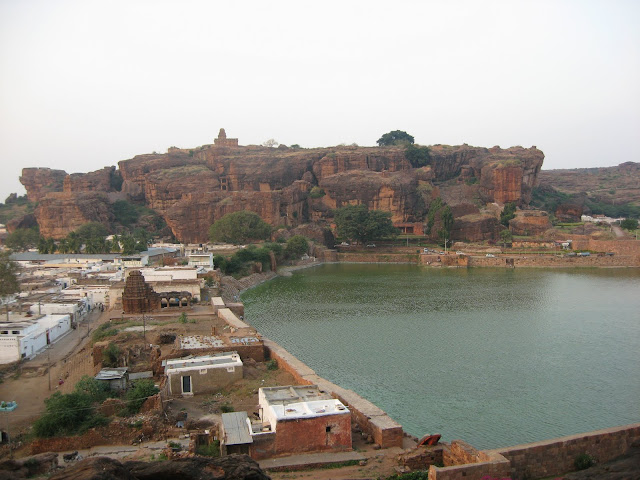 Huge red sandstone cliffs are all we can see as we drive into Badami. Soon, the lake comes into view, and the two sets of cliffs which attract thousands of visitors to this small town become clearer. Opposite us we can see the famed caves filled with tourists who stand out against the red rocks in their multi-coloured clothing. On the other side, we see a board announcing the presence of the ASI museum, and over it, an arch which appears to be the entrance of a fort. Our driver discourages us from entering. “Madam, there is nothing to see there… just two old and broken temples, and the climb is strenuous. Everything here was destroyed by the Pallava kings. No one goes there. It will be deserted.  Let us go and see the caves instead.” However, the cliffs are too inviting to miss and a sudden desire to climb and see the ruins of the old temples strikes me. Besides, every place we visited has been crowded, and the caves seem to be full too. The strain of climbing seems to be too slight a price to pay for the pleasure of solitude amidst such surrounds. And thus we set out to climb the cliffs of Badami towards the Badami Fort. Come along with me and you can experience it for yourself………….

A bit of history as we enter the fort – It was the Chalukya king Pulakesi I who made Badami, then known as Vatapi, his capital in the year 543AD. His descendents came to be known as the Badami Chalukyas. They expanded the kingdom, bringing most of the Deccan under their rule. During the reign of Pulakesi II, the kingdom extended from the banks of the Narmada in the northwestern part of India, all the way to the banks of the Kaveri, bordering the Pallava kingdom. The history of the Pallavas and Chalukyas is intertwined with constant wars, victory and defeat. Each dynasty left behind the marks of its invasions, and each dynasty gained and lost treasures. The golden period of Badami ended in 642 AD when the Pallava king Narasimhavarman attacked and occupied the city. It was only after 13 years of occupation that Badami was liberated again by the Chalukya king Vikramaditya I.

Clarification: I am not an expert on history, archaeology, or architecture. For me, the most interesting thing about a place is the story – be it history, legend or myth. I was drawn to the fort by the stories I had heard of it. As a child, I remember my mother telling me the story of Sivagamiyin Sapatham, where the story is set against the backdrop of the war between the Pallavas and Chalukyas. Pulakesi there (I think it must have been Pulakesi II) was the villain, the one who repeatedly attacked Kancheepuram and forced the Pallavas to retaliate. At Badami, I heard stories of the greatness of Pulakesi – how he united the entire Deccan region, his achievements in temple building, his greatness….. And finally, how Narasimhavarman destroyed every inch of Badami! This difference is point of view is what interested me most, and what I have carried back with me. As you come along with me on my tour of the Badami fort, try to look through my eyes and try to see what must have been a great city once, before war and hatred put an end to it all. Try to imagine what could have been possible if only humans hadn’t felt the need to fight! 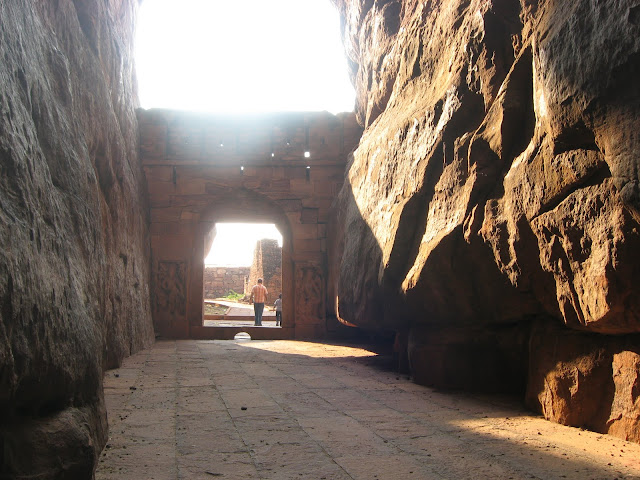 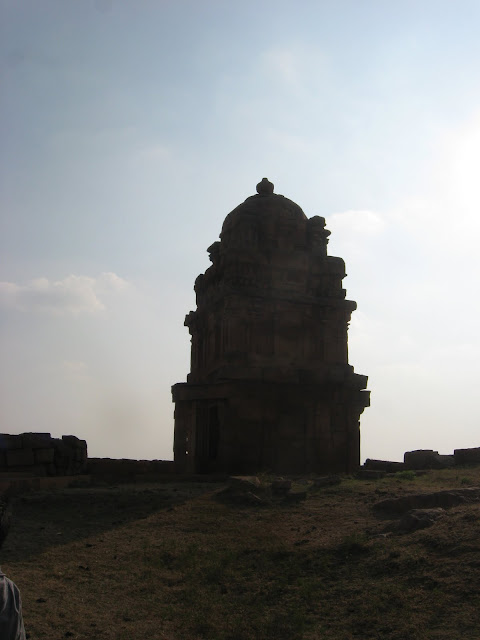 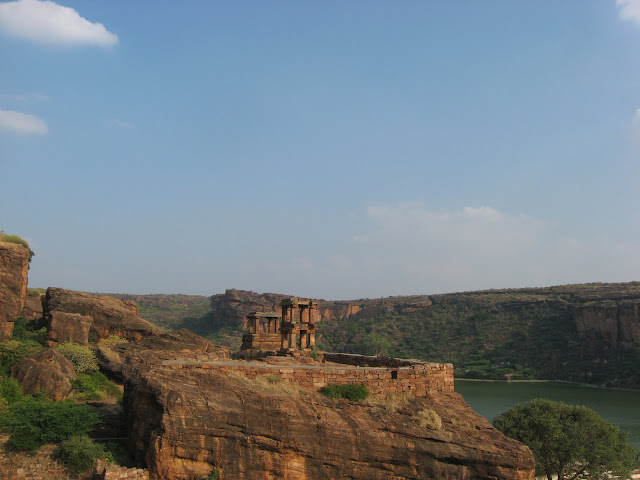 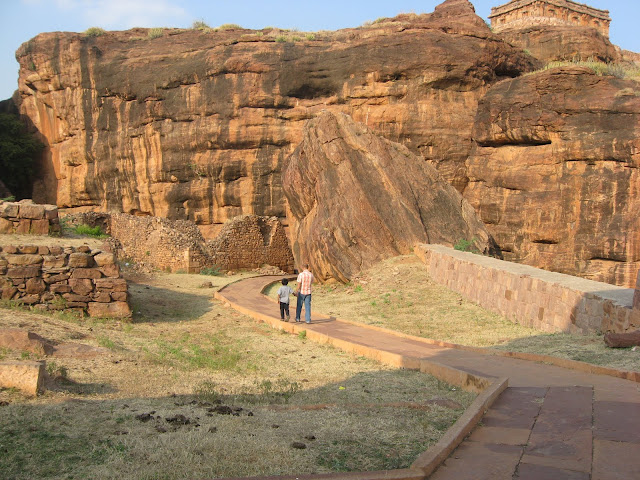 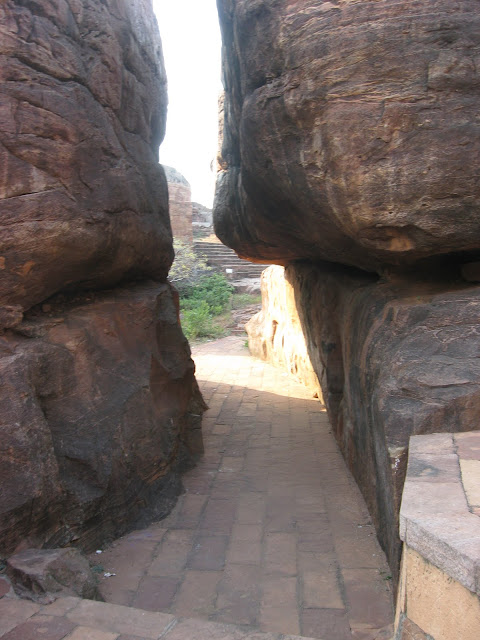 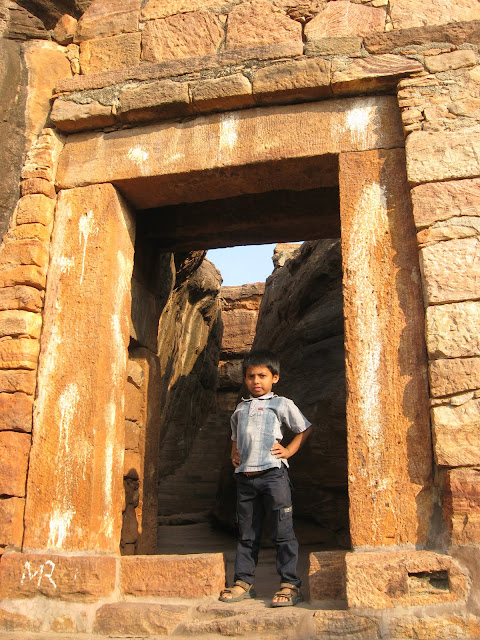 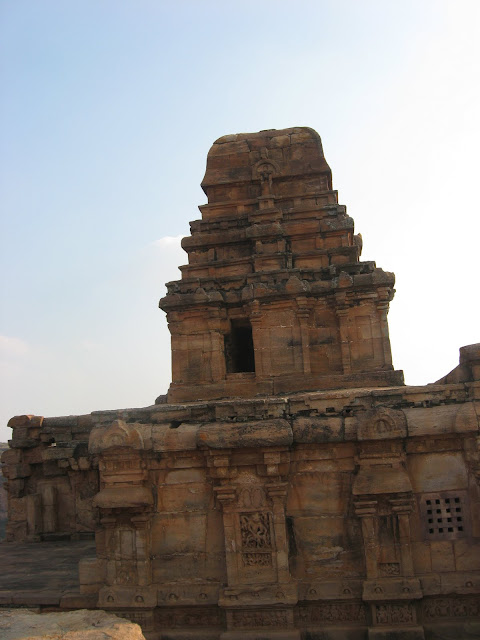 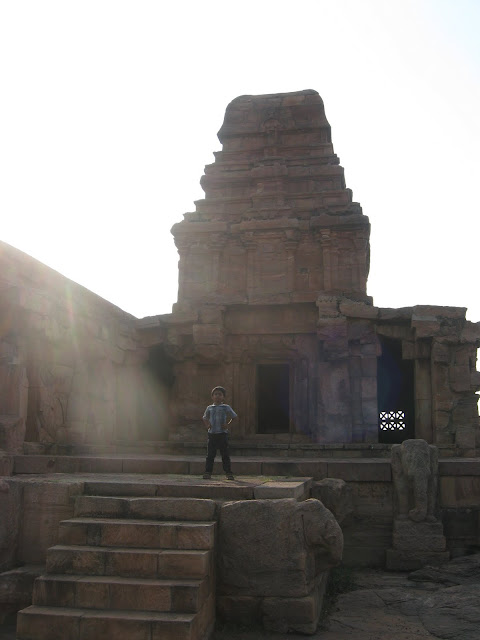 That brings us to the end of this tour...... Did you notice that only Shankar and Samhith figure in the photos? Well, thats because our driver was right - there was no one there!! We met just one more group of students climbing up as a group, and that too at the top. They seemed surprised to see us, and quietened down while we were there, so we did get what we were looking for - peace and solitude, and communion with history!