Please read the first part Badami Cave Temples Part 1 (if you haven’t already) before reading this one! 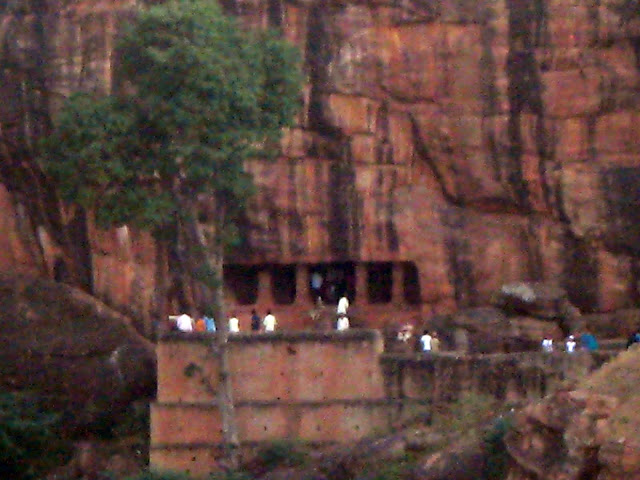 The caves at Badami have become quite a tourist attraction, and also a popular spot for school picnics and excursions. When we visited the caves in late December, there was a huge crowd of school students, all of them thrilled at having a day off from studies. The teachers accompanying them seemed bored, and least interested in anything except making sure that the children didn’t lean too much over the parapet wall and fall off!
The children were more of a nuisance, especially for the single security guard posted at each cave. He had a hard time warding off the students who were busy clambering upon anything they could find, not even realising that these were delicate sculptures meant to be admired, not climbed upon! As one belabored guard commented after I empathized with his predicament, “These beautiful sculptures have weathered rains, storms and heat for over a thousand years, but still stand tall and proud. However, how long will they stand if children keep climbing up and people stand on the sculptures, wanting to pose with them for a photograph?” Its high time something is done about this. School children should definitely be taken to heritage places for excursions. How else will they learn about the greatness of India? However, they must be made aware of their beauty, their importance, and over all, the need to take care and preserve them before it is too late! 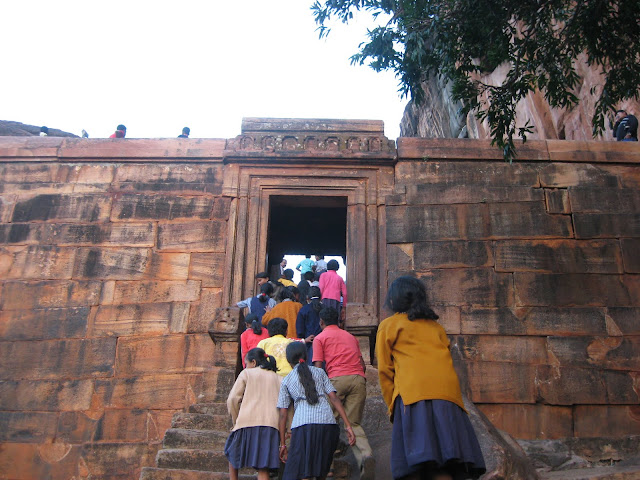 Also a nuisance were the monkeys, who were all over the place. We were warned not to take anything with us – not even a water bottle! In fact, I carried nothing to the cave except my camera, and it was this perhaps which kept me safe from them! 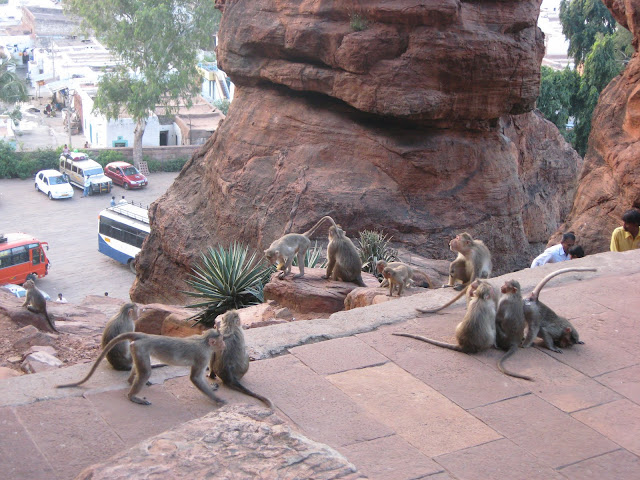 We now come to the second cave, this one dedicated to Lord Vishnu. This was a smaller cave, with just a couple of major sculptures, but it was filled with children clambering all over the place. As I waited for them to leave, I noticed the beautiful work on the ceiling of this cave…. 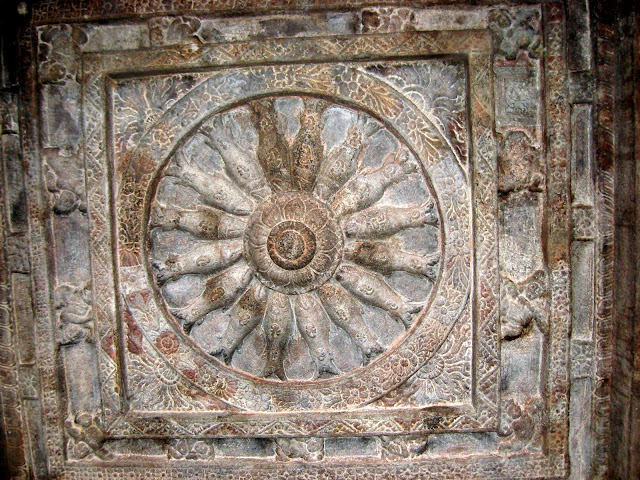 The wheel has 16 spokes, but here, each of these spokes is a fish! And these were made more than a thousand years ago, on the ceiling of a cave!

This swastika pattern seems to be a popular one, seen at Aihole, Badami as well as Pattadakkal. The most interesting thing about this pattern is that these four swastikas can be drawn without lifting our pen from the paper! 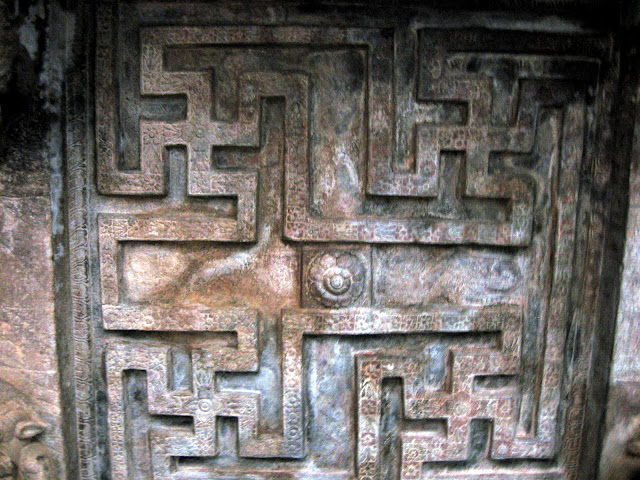 There are two major sculptures in this cave. The first one is that of Varaha – the boar. To read the story of Varaha avatar, click here. 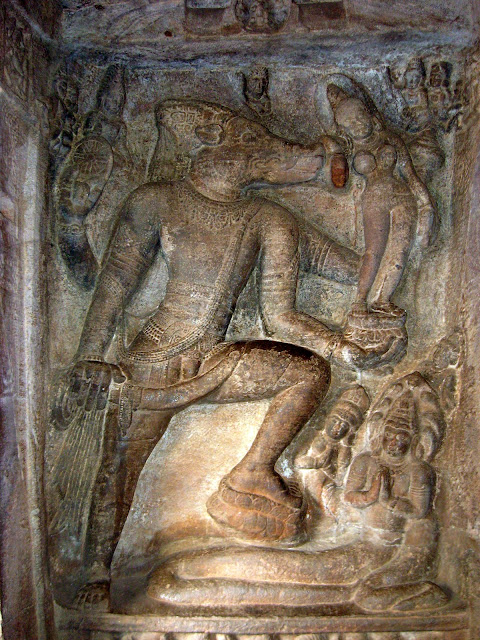 The depiction of Varaha in stone is amazing. He is shown as part human – part boar, holding Bhudevi (earth) in one hand, his discus (chakra) in the other. His left foot rests in the netherworld, as he rescues Bhudevi from the depths of the ocean. Usually, Varaha is shown holding Bhudevi on his tusks, but here, he holds her in his hand while she balances herself holding on to the tusk. The denizens of the netherworld, the snakes, led by their king, Vasuki, are shown praying to the Lord’s foot which rests in their land.

The second sculpture is that of Vamana or Trivikrama. To read the story of Vamana, click here. 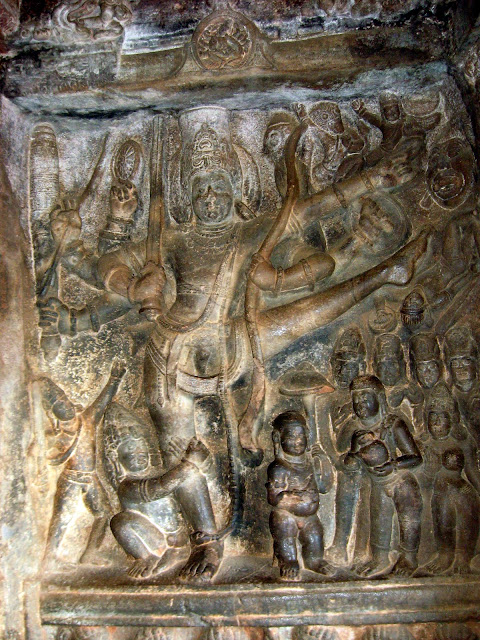 Again, see the kind of details shown…… Vamana stands with one foot on earth, and one reaches the skies. There is a figure at the top right corner which may represent the sun, thus depicting Vamana’s leg touching the sky. The whole story is depicted in the panel – with Vamana the dwarf, King Bali, Sukracharya, the demon’s advisor, and finally, Bali falling at the feet of the Lord.

This cave also has some interesting ‘signatures’ left behind by the sculptors! Here is one on a pillar – 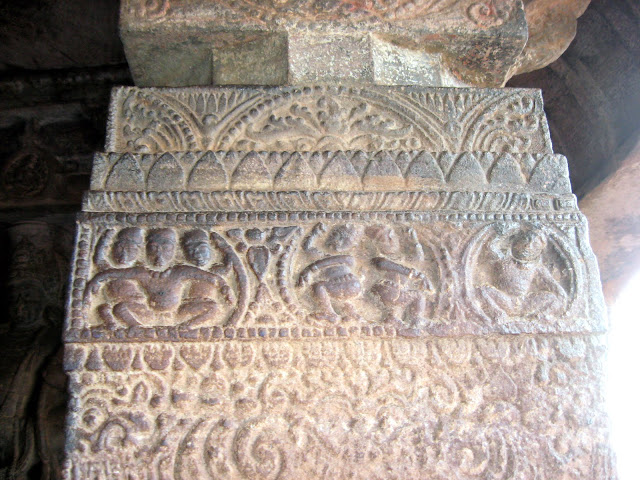 See the figures? The first one has 3 faces, the second two and the final one. What do they show? The one on the extreme right is simple – just one face and the body to go with it. the middle one has two faces and two bodies, but joined together in such a way, that each figure can depict two dancing postures. The one on the left has 3 faces, one main body and two on the side, but only four arms and legs. However, each figure is complete and again depicts different postures!

This was the simplest among the three Hindu caves. The third one is the most elaborate, so you can look forward to a treat soon in my next post!