The Cave Temples of Badami


The main attractions at Badami are the rock cut cave temples. Carved out of the sandstone cliffs in the late 6th and 7th centuries, these caves have a verandah at the entrance with pillars cut into the stone. This leads to a pillared hall or mandapa, which in turn leads to a small sanctum. There are 4 such caves – the first one is dedicated to lord Shiva, the second and third are dedicated to Lord Vishnu and the fourth one is a Jain cave. 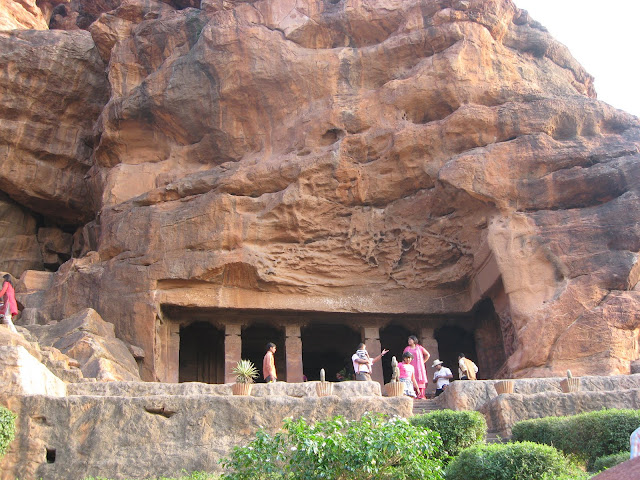 Come along with me for a photo-tour of the caves. Please excuse the quality of the photographs. I have tried to capture the beauty I saw all around me, but, there are many which do not do justice to the beauty of the originals. It was evening when we visited the caves, so the light wasn’t too helpful. Besides, the caves were so filled with school children who had come on a picnic, that just getting a shot without them in the frame was a challenge!

When I started, I intended to write about these caves in a single post, but it just went on and on and finally, I decided to cut it down into parts – one for each cave! So here goes part 1!

We begin with the first one, at the lowest level – the only cave here dedicated to Shiva. 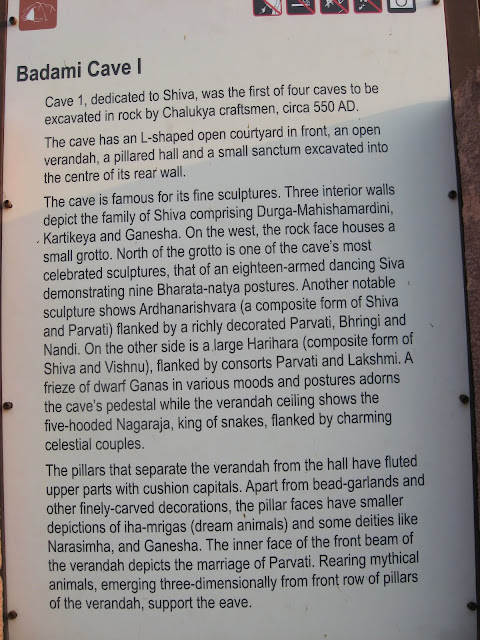 The sight which greets us here is probably the signature sculpture of Badami – the dancing Lord – Nataraja. 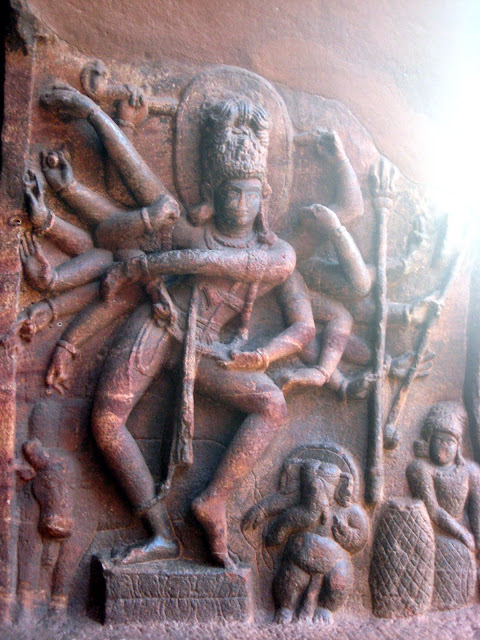 This is a unique depiction of Nataraja, since he is depicted with 18 arms. The 9 arms on the left and the 9 on the right together depict the 81 postures of Bharatanatyam – the divine dance. This cave dates back to 550 AD, but the beauty of the Nataraja remains unblemished, despite the wear and tear! On one side we can see Ganesha dancing along as one of the Ganas plays the drums! On the other side is Nandi, bowing his head, or with a slight stretch of imagination, nodding his head in tune with the music!

Also in this cave are Karthikeya…. 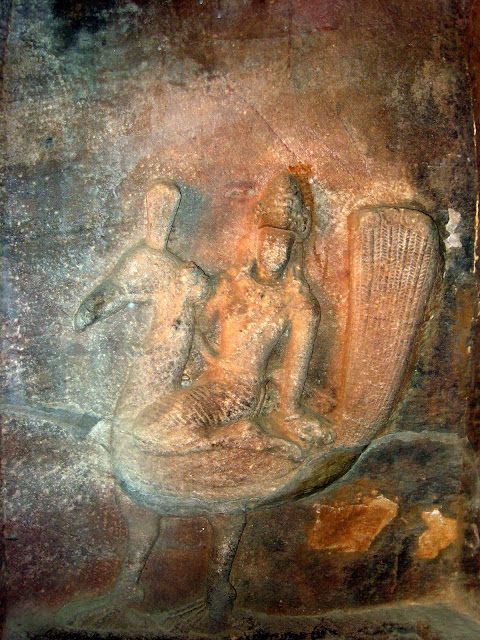 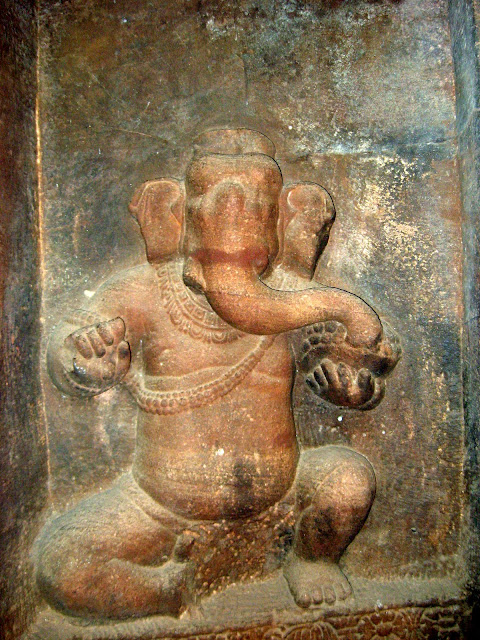 If you observe closely, you can see that this Ganesha does not have a potbelly. I was told that this depicts the famous ‘Vatapi Ganapathy’. For those of you who haven’t heard of this, a short explanation – Vatapi was the original name of Badami, and it is believed that there was a special idol of Ganesha here which was taken by the Pallavas and installed in a temple at Thiruchengattangudi near Thanjavur. The Ganesha there is still called Vatapi Ganapathy and there even is a famous song in Carnatic music dedicated to Him.

Then comes the female counterpart of Shiva – Shakti or Parvati – here depicted as Mahishasura Mardini (slayer of the demon Mahisha).. 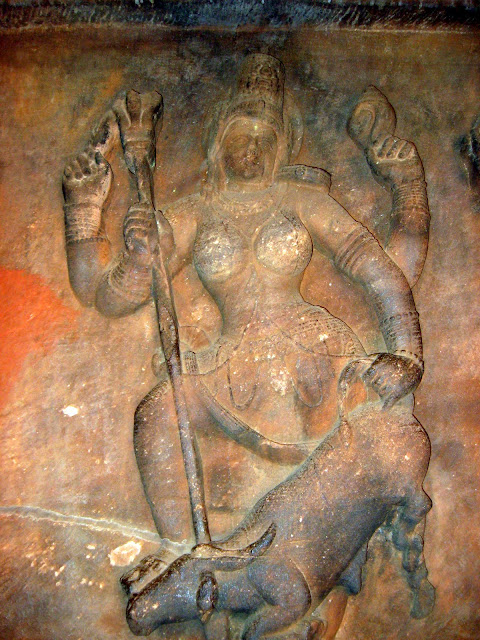 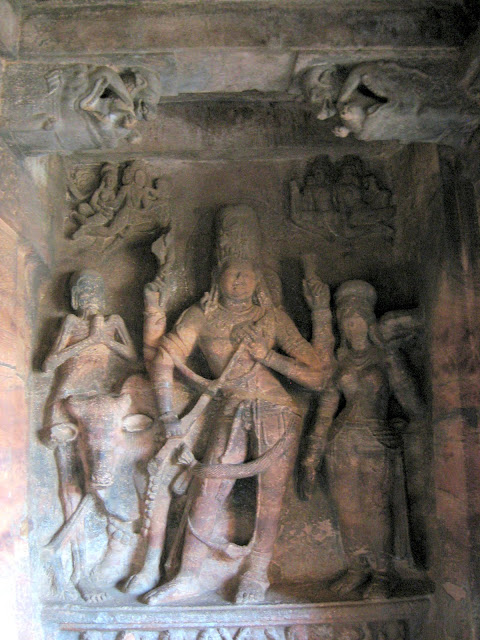 On Shiva’s side is depicted the sage Brighu – the one responsible for this form! On Parvati’s side is one of her friends. Here is a closer look… 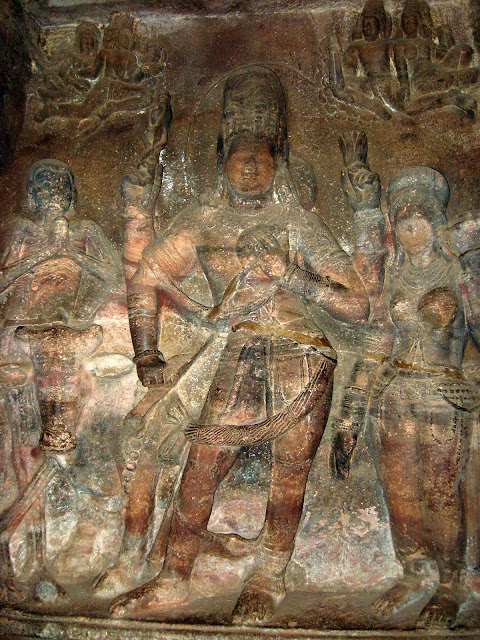 The sage’s ribs are visible, as well as the differences in the two halves of the figure – on your left, you can see the masculine portion which is so clearly different from the feminine portion on the right….. If, at this moment, you are awed, just imagine how we would have felt, standing in front of such a magnificent piece of work!

Next is Harihara – a fusion of Shiva and Vishnu – the coming together of two sects – the Shaivites and the Vaishnavites. 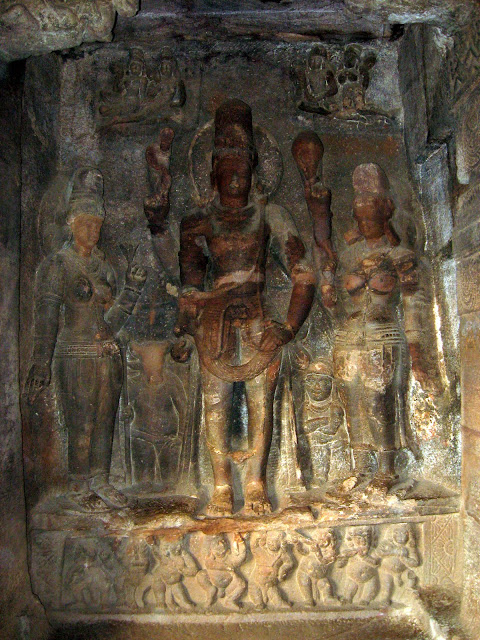 Again, a closer look shows the wealth of detail here. On the left is Shiva, accompanied by Nandi and Parvati, while on the right is Vishnu, with Garuda and Lakshmi by his side. Shiva has his matted hair piled up atop his head, a snake holding it together, a moon decorating it, while Vishnu has a jeweled crown. Shiva has snakes as ornaments while Vishnu has jewels galore. They hold their signature weapons, such as the noose and the conch. Every aspect of the two gods has been depicted so beautifully that one can just stand on and on staring at it!

There are other, smaller sculptures which adorn the caves, such as this one showing Shiva and Parvati on the Rishabha – the bull. See how Parvati has been depicted sitting side saddle! 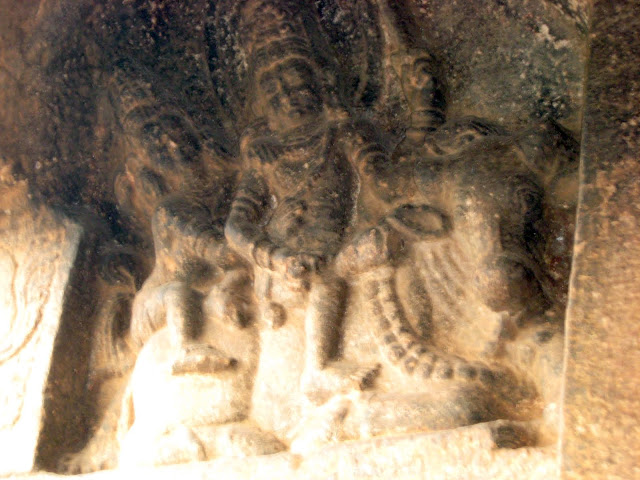 Outside are two dwarapalakas – door guardians. It is believed that these are also forms of Shiva, since they are depicted with Shiva’s weapon, the trident. 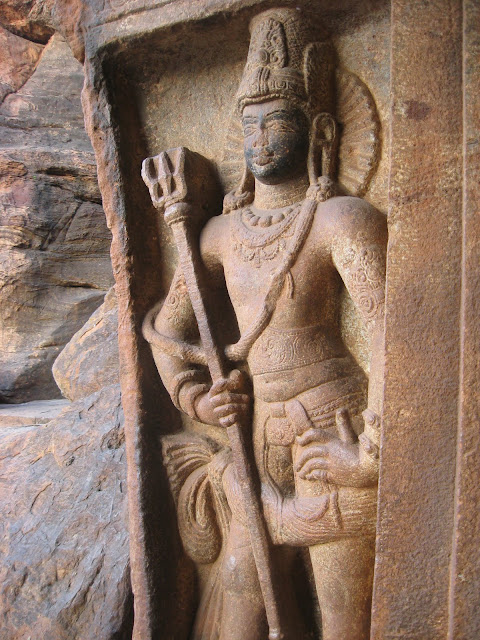 There are a couple of interesting carvings here, both on the pillars, and easily missed. Here is the first. Unfortunately, the bottom part has been lost, but what can you see? 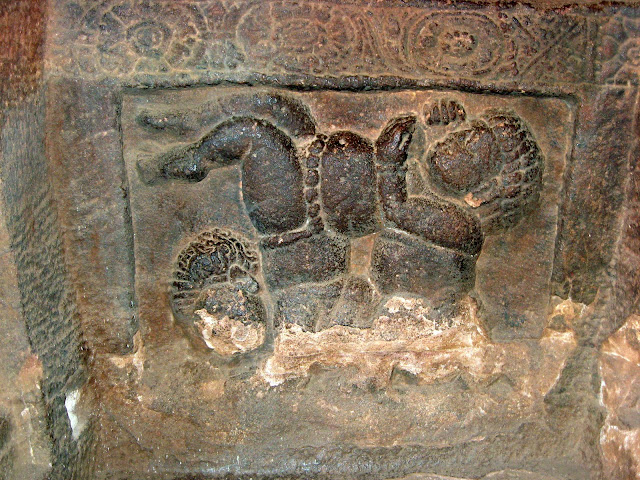 At first glance, you can see two children, can’t you? One down and one up. The lower one is crawling and the upper one is lying down. Now look closer and see how the children have been carved. Can you see two more children? One on the left is doing some kind of gymnastics and the one on the right is standing. It is believed to depict the four stages of childhood – first when the child is sleeping all the time, then, he begins crawling, then he stands, and finally, he does all sorts of gymnastics!

The second one is simpler, but no less beautiful – 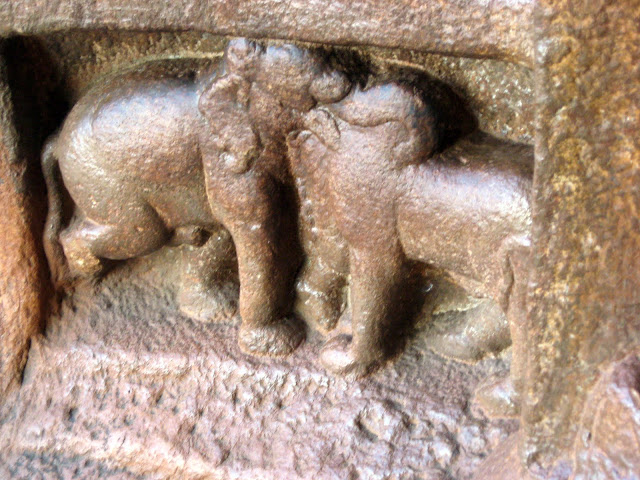 This is quite a well known depiction, showing the elephant and the bull. Can you see them clearly, though sharing a head apparently?

These carvings are believed to be the work of the master sculptors, a sort of signature, showing their skill and intelligence! We don’t know the names of the talented artists who created these marvels. They lived and died unknown. However, every time a visitor sees these beautiful works of art and appreciates it, or spends a moment applauding the skill of the creator, they surely smile, wherever they are!