When Ganesha tells us Stories..

September 05, 2011
One of the most interesting things about the Sarvajanik Ganpati Pandals is the pains they take to decorate it, especially to relate a story. While it is certainly a great stage for bringing social issues to the fore, even a mythological or historical tale has its plus points, especially if it is interesting enough for kids (and adults) to want to know more!
We have visited quite a lot of Ganeshas in our locality, but there are two we always look forward to.

One is the Ganpati at the Duke's factory. They usually pick a well known tale and try to animate it. The result is not very sound, technically, but kids seem to love the sound and light effects in spite of its shortcomings. This year, they had set up the story of Mahishasura Mardini - the form of the goddess who slays the asura Mahisha in the form of a bull. 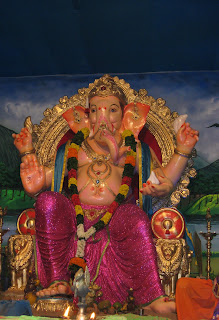 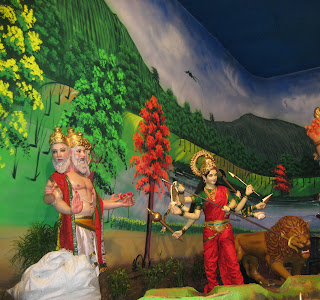 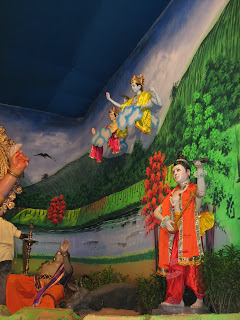 Thanks to the heavy rain, the man who worked the sound and light controls hadn't arrived, so we had to satisfy ourselves with just a look at the settings. It was a story we all knew well, even Samhith. However, as I was clicking pics, I heard one man come up and ask the priest what the story was about, and why the demon had a bull near him. Even as the priest tried to explain, I realised that many of these people have not been exposed to stories as we have, and for them, even this simple one is an opportunity to learn more.If only we could have some better and more detailed story sessions for kids from all backgrounds!!
The second Ganesha was one at a factory next to the RK Studios. The RK Ganesha is another one we visit every year, but it is one whose attractions have paled, since there is nothing new to look forward to, each year. Both the Ganesha and the decorations remain the same. Wish they would make more of an effort! Coming back to the Ganesha next door, at Prathibha Industries, they had an interesting theme - Samarth Ramdas.The scene was Sajjangadh near Satara - where the sage had his ashram in the fort built by Shivaji. It was called the 'Spiritual Capital' of the Maratha empire! 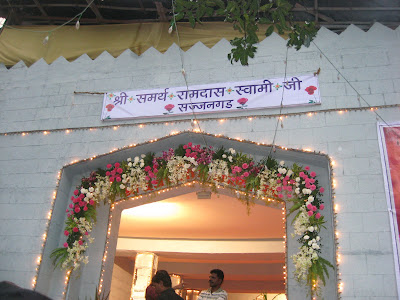 Inside, the Ganesha was placed in front of a mountain, showing a cave in which the sage meditated on the right, and his ashram at the top, with people walking up the path. 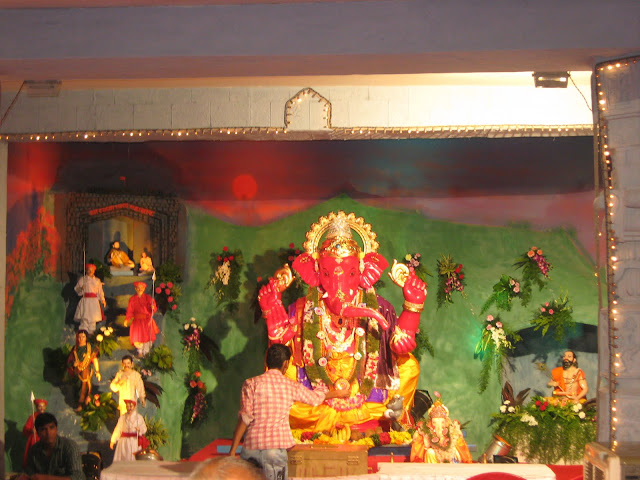 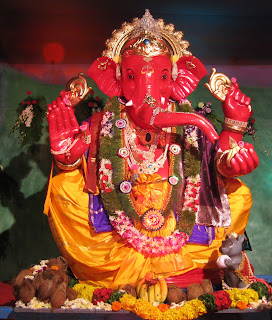 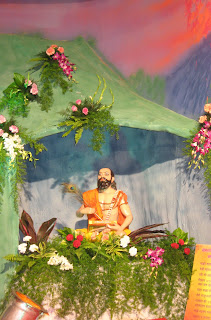 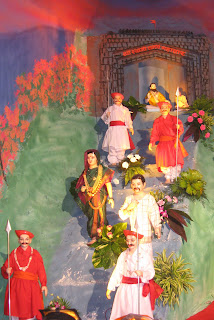 Sajjangad is where the sage attained Samadhi and all around were posters telling us about the sage and his life. 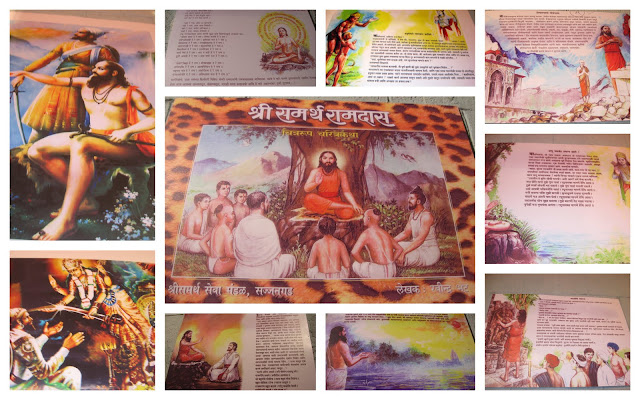 This was one story Samhith didn't know. In fact, since we visited Sajjangarh in Udaipur during the holidays, the name itself was confusing to him. This is where such displays come useful, since he is now aware of  a saint he hadn't even heard of before!
For those of you who don't know about the sage either, here is a short bio....
Samarth Ramdas was born on Ram Navami in Jalna district of Maharashtra in the year 1608 AD. Since childhood, he was a great devotee of Lord Rama and Hanuman. Even as a child, he had a vision of Lord Ram, who told him that he would guide a ruler of the Marathas to his glory. His parents convinced him to get married at the age of 12. It is a Maharashtrian tradition to say the words "Shubha Mangala Savadhan" thrice during the marriage rites. It is a call to everyone to be alert since the marriage vows are about to be taken. Hearing the word "Savadhaan", which means, Be alert, the young boy took it to be a call from the Lord, warning him against the perils of a householders life. He ran away and led a life of seclusion on the banks of the Godavari. It is said that he repeated the name of Rama thirteen crore times. He used to prostrate before the sun twelve hundred times every single day. Pleased by his devotion, Lord Rama appeared again before him and blessed him. The saint continued his work, going on a pilgrimage to various places in India, including the Himalayas, installing idols of Hanuman wherever he went. He set up 11 temples to Hanuman around Satara itself! Later, he became the spiritual advisor to Shivaji, and agreed to set up his ashram within the fort of Sajjangadh, where he finally attained Samadhi.