Of Books and The Sunday Book Club


As a book lover, I need the least of inducements to talk of books. The people I get along best with are those with whom I can converse about books. In my family, I am the one who wants books as gifts, and also gifts nothing but books! 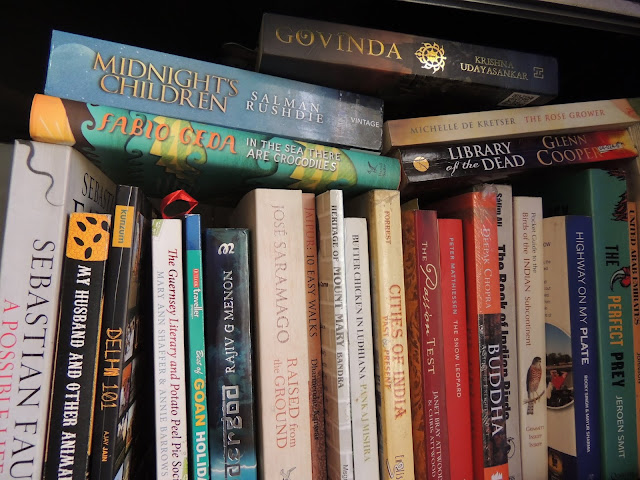 Thus, when I heard of The Sunday Book Club (TSBC in short) from Sudha, I was thrilled. I had been on twitter for a long time, but had not really been able to join in many conversations. Here was a chance for me to actually be a part of something interesting. But then came trouble in paradise. Sunday afternoons aren’t the best time for me, with the whole family at home, sometimes even guests, with lunch almost always so late, that it clashed with #TSBC. I was thus reduced once again to be a silent spectator, lurking around, going over the interesting conversations, but much after they were over. The only time I had a chance at participating was when I was travelling, but my mobile network refused support, and there I was, not able to connect. And thus it continued, and I despaired of ever participating in all those enthusiastic discussions based on some of my favourite topics.

And then, a couple of weeks back, by some sort of miracle, I  suddenly found myself free a little earlier than usual, lunch done, chores completed. I glanced at the watch, and it was just about to strike 3.... TSBC was about to begin, and I could participate at last!!!!! Hubby was having a nap and Samhith was busy with his stamps. I sternly cautioned him against disturbing me for the next hour, and headed to the comp, all set to have an hour to myself, to do what I loved best – talk about books. The icing on the cake was the topic for the day – Mythology, a topic I can never stop talking about!

So it was, that the next hour passed by, in a sort of dream, and so fast that I scarcely noticed the passage of time, so engrossed was I in the discussions, and so painfully aware of how little I had actually read L. The discussions continued, way past the time allotted, such was the enthusiasm. By the time I turned away from my Twitter Timeline to turn my attention to Samhith once more, I had gained so much – a long list of books I wanted to read, a bunch of new friends whom I hadn’t even heard of, before that hour, and above all, I was one of the winners of the TSBC giveaway – ‘Govinda’ by Krishna Udayshankar! It was surely one of my best Sundays, ever!

It has been two weeks since then, and two more topics have been endlessly discussed. The book I won has been delivered, courtesy, Hachette India, and has already been read, leading to a lot of work at home left incomplete! This is seriously not the right time for any of you to visit my home, such is the state of affairs considering my love affair with books, which has been taken to completely new heights, all thanks to #TSBC.

This post originally began as an introduction to my review of the book, but as usual, once I began I couldn’t stop myself, and this has led to too many words, and thus an entire post on TSBC. The book review itself will soon be up... or rather, as soon as I finish reading it once again! Meanwhile, if you are a book lover, or even if you would like to read more, TSBC is the place to be, on Sunday afternoons, from 3 to 4.