This is the second part of my series on the Kala Ghoda Art Festival. Please read Part 1 before reading further.

Mumbai is the city of dreams, the city which never sleeps. This post is about the visual art displays representing the city. And let me start with one of my favourites –

Dhanda, or business, is what keeps this city going. The city is called the commercial capital of our country, and this is a word that applies to all – from the lowliest labourer to the corporate honcho. This word looms over the city skyline, in letters represented by skyscrapers, towering over tiny hutments that cover every inch of space far below, on the ground. What a perfect representation of our city!!!

Space being the biggest commodity here, another oft repeated word is FSI – Floor Space Index. Instead, here is an artist’s rendition of another FSI – Floral Space Index!!! How much better and more colourful it is!!! 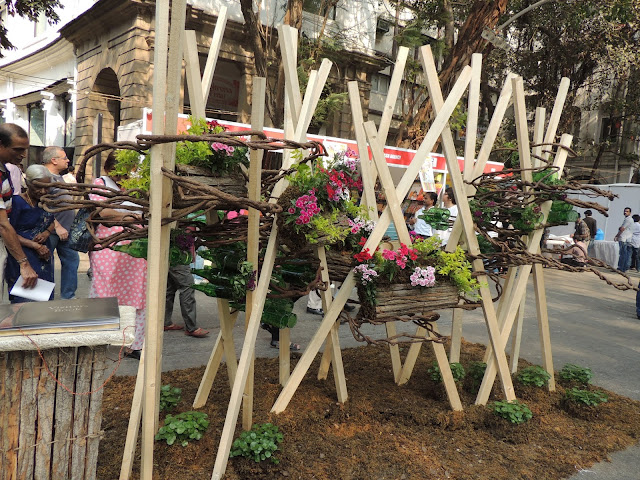 In this city obsessed with space, birds are taking a hit, especially sparrows, which have all but disappeared from the concrete jungle that is the city. 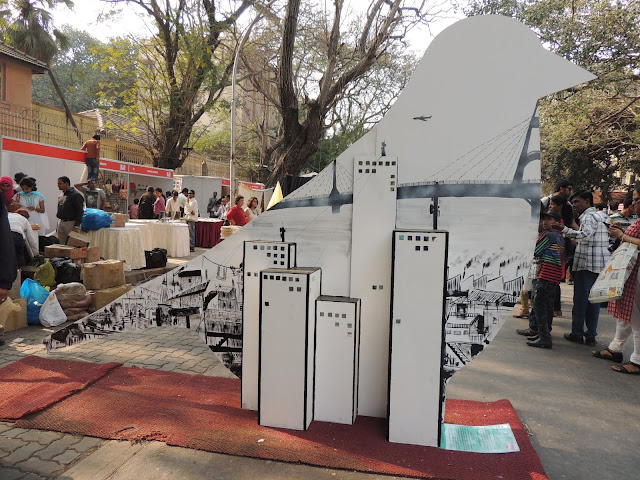 However, there is another side – the side of a city slowly waking up to the issue, for example, by building bird houses. 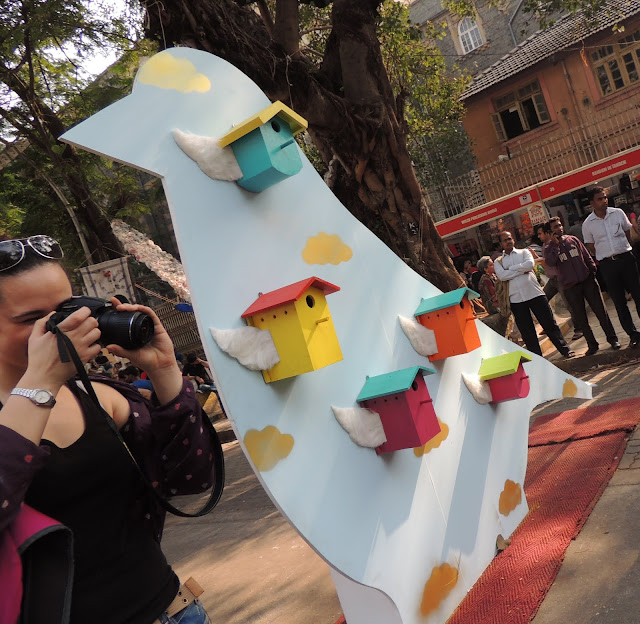 I loved this representation of a well, showing us the reflection of all the buildings which are supposedly around it... scarcely the water which it is meant to hold! 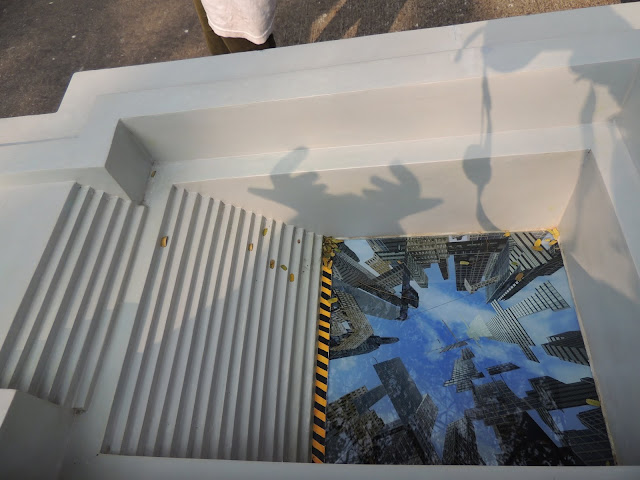 This installation showed us our city, as was evident from the Wankhede Stadium and the Nehru Science centre models. Unfortunately, the information board wasn’t put up, so we had to make our own interpretations – does this represent, for instance, the island city being flooded once again? 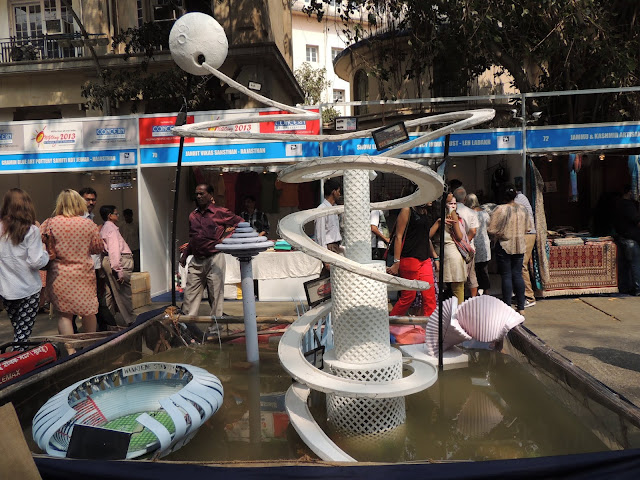 The best among all was undoubtedly the one representing Mumbai’s famed Dabbawalas. This huge dabba has apparently been made by students of the Singapore International School, which really impressed me. 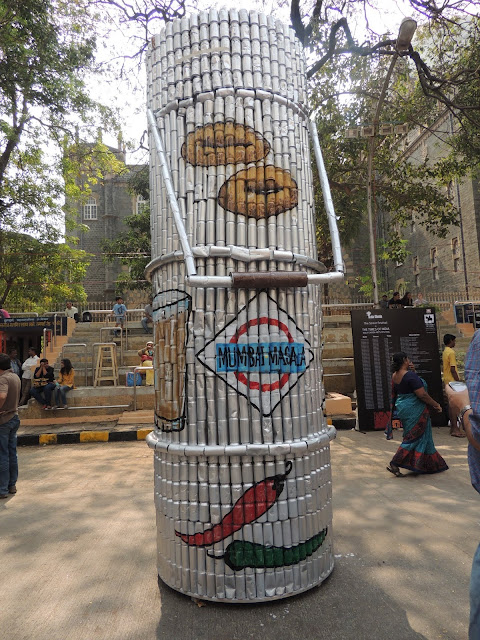 And here is the dabbawala.... literally carrying the city on his back... 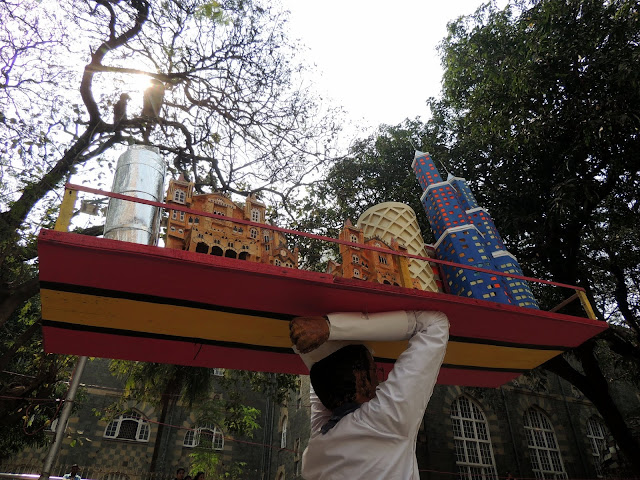 The attention to detail is great.... there are our most popular monuments right there, along with a few dabbas.. 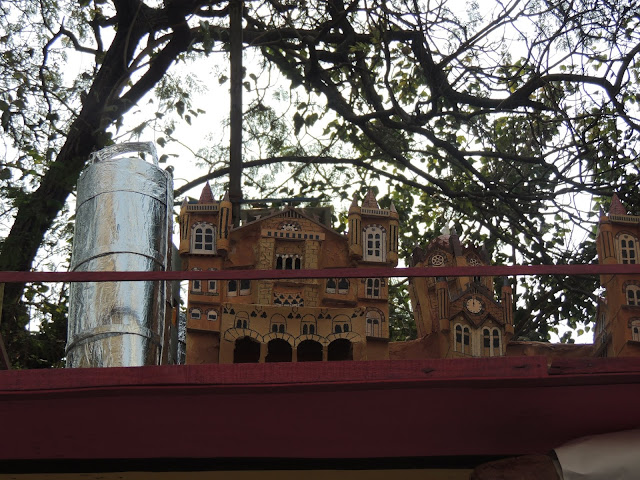 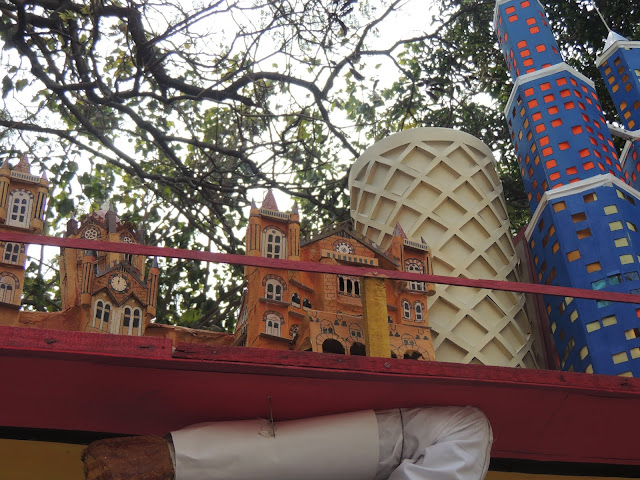 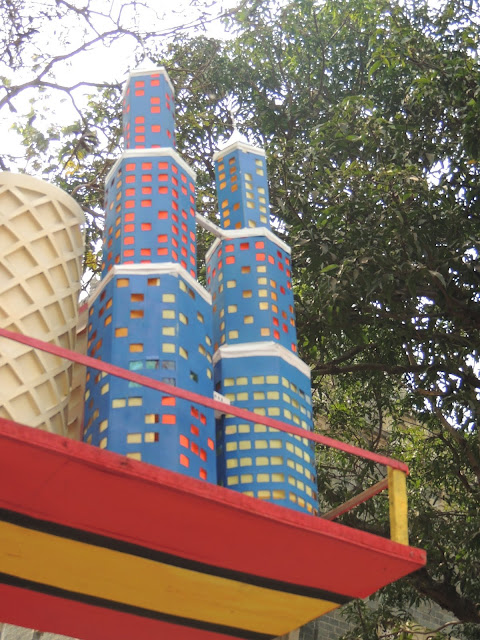 And here is a closer look at the man himself. What a wonderful tribute to a group of men who make it possible for us to have hot meals from home delivered to our office! 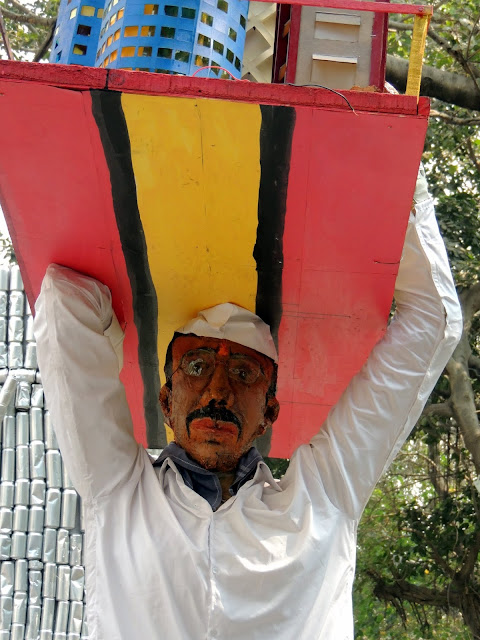 People come to the city, with stars in their eyes... which is represented by this installation, which literally shows stars in our eyes! There are stars... and then again there are stars – filmstars! 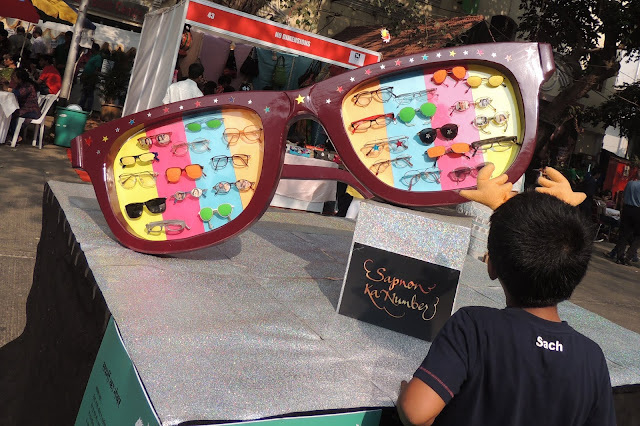 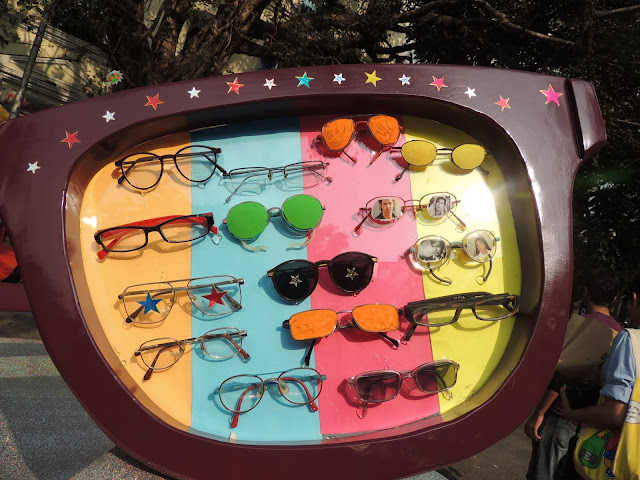 It is impossible to talk of Mumbai without films and film stars figuring somewhere. And they were here too, in large numbers, I may add – if not in person, in representations! One of the most prominent installations depicted 100 years of Indian Cinema.... 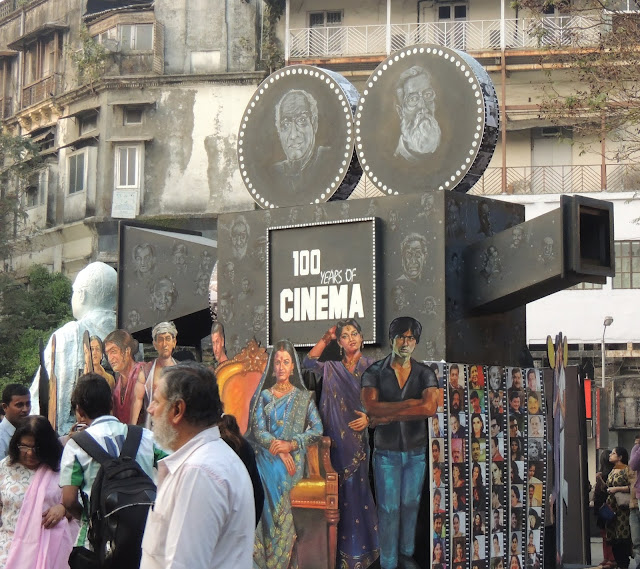 with the father of Indian Cinema, Dadasaheb Phalke looming over the installation... 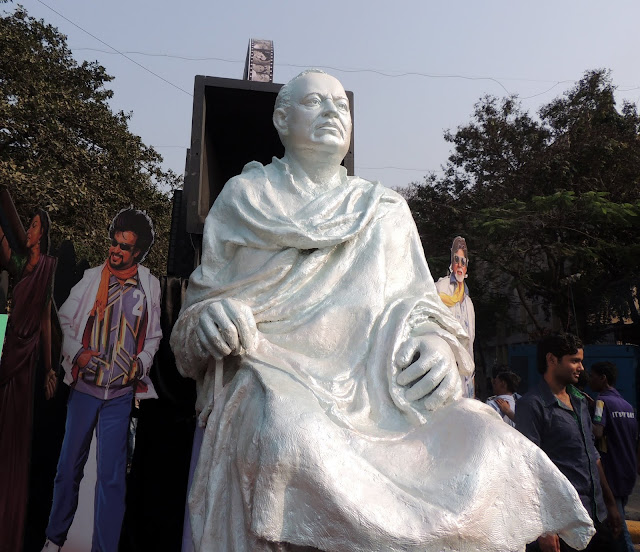 and loads of film stars, of course, the bulk from Hindi films..... 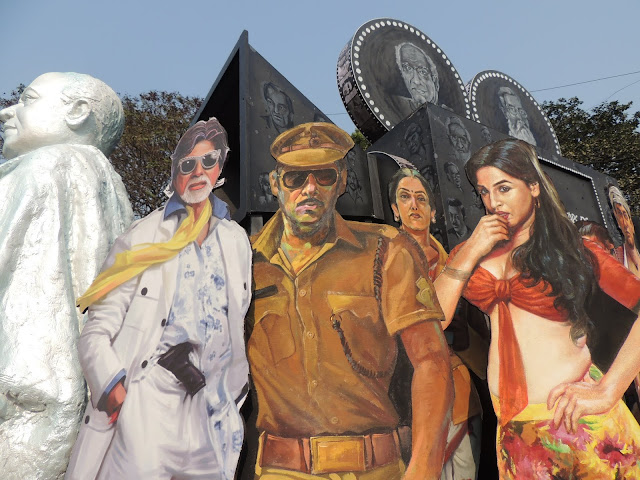 They were everywhere to be seen... even hanging from the trees! 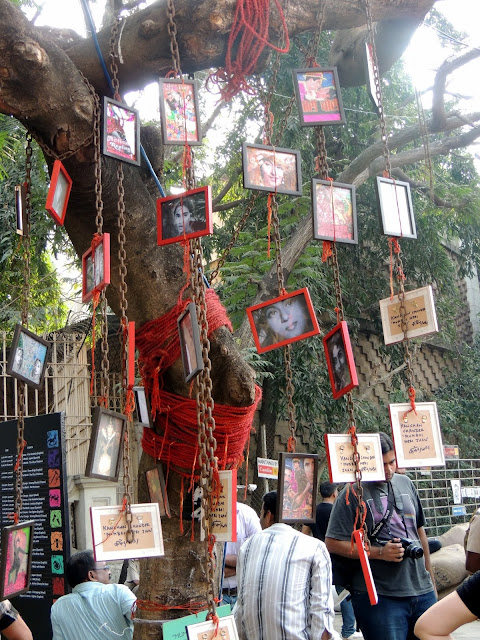 Fashion in the city wasn’t neglected either, with this huge, high heeled shoe entitled ‘Shoe in a Metro’. 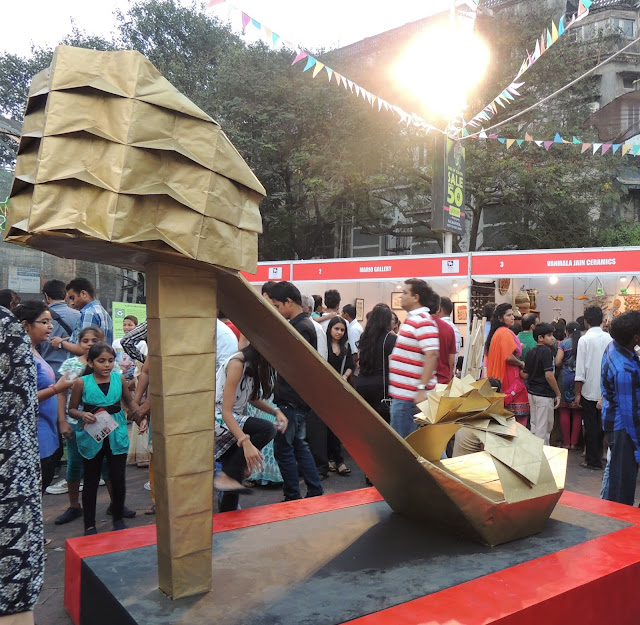 And finally, among installations related to the city, there was this huge replica of a Mummy, right outside the side entrance of the Museum, encouraging visitors to go look at the Mummy which is on display at the museum. And it looks like the ploy was successful, since we saw huge queues waiting for a glimpse of the Mummy, and thanked the stars we already had our turn!

If you are wondering, no, thats not all.... there is still more to see.. And we are still at Rampart Row! So, come back again, tomorrow, for some more glimpses of KGAF 2013!

Once again, for those of you who want to go and see it for yourselves, here is a link to the complete schedule....