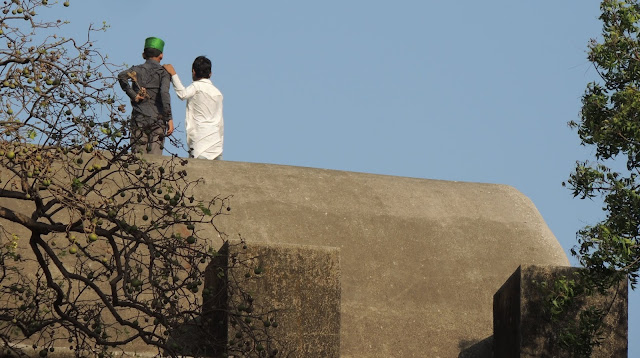 I first read about Sewri Fort in an article on the various forts in Mumbai. Every time I visited the Sewri Jetty to see the flamingos and other birds, I wondered where the fort was. A friend later told me that it was just off the road we took to reach the jetty. Unfortunately, ardent birdwatchers aren’t always heritage enthusiasts, and I never found company to go to the fort. Much as I love to explore, going into a deserted and ruined fort alone didn't seem the safest thing to do, and the fort remained on my wish list for all these years. When Travel-Logs announced their Sewri Walk, the one place I was keen to visit was the fort. Thankfully, the dates and timings were convenient for once, and I eagerly jumped on to the bandwagon!

The Sewri fort was built in 1680 by the British, on the island of Parel. The main purpose of this fort was to act as a watch tower, given its vantage position overlooking the eastern seaboard as well as the mainland. It was captured by the Siddis in 1689, and remained in their hands for a few years till the British managed to drive them away once again. The fort is said to have been instrumental in repelling an attack by the Portuguese in 1772. So much for history... now for what remains of it.... 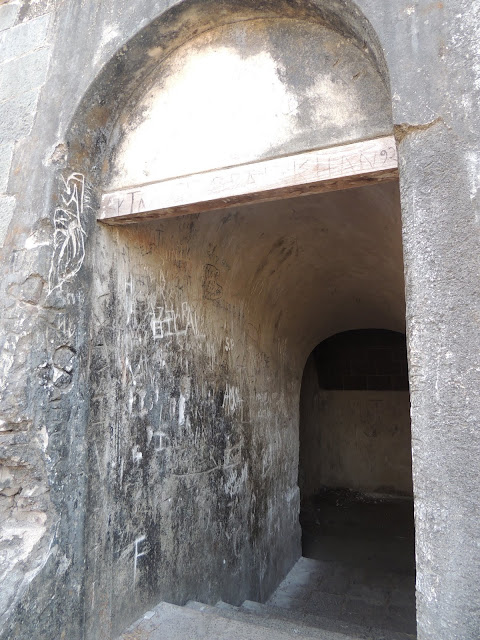 The fort is barely visible from the road. Newer buildings have come up in the vicinity... not just warehouses, but also residential buildings, which succeed in hiding this remnant of our history. If I had gone there alone, I would have wondered if there really was a fort here.

Right at the entrance is a dargah, which is what draws crowds. We found ourselves there on an Urs day, and the place was teeming with people – pilgrims, loiterers, as well as policemen. 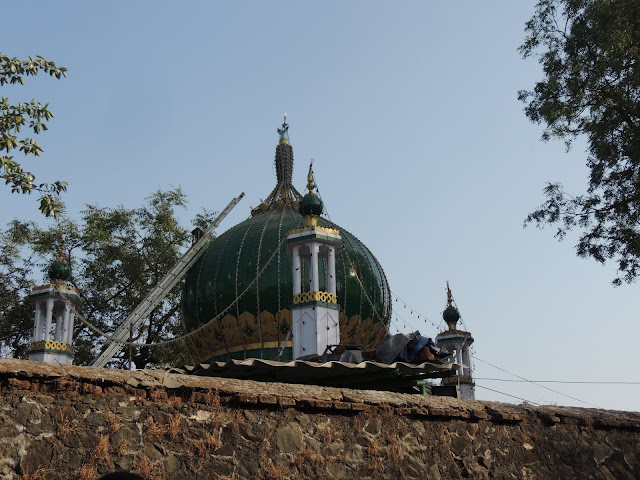 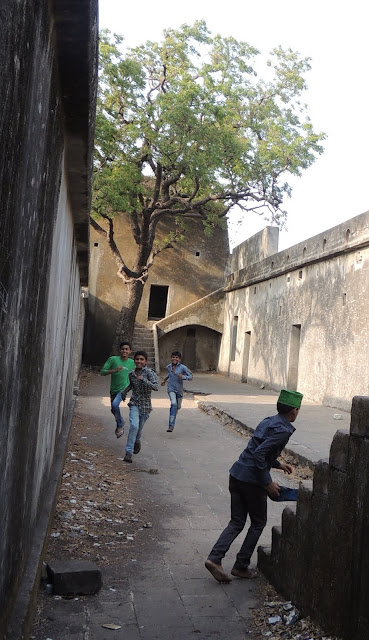 The fort has been ‘restored’, which seems to mean that almost everything has been covered with concrete. What I took to be the dome –like ceiling of the original structure is apparently an attempt to bolster the weight of the concrete used for reconstruction, something which is deeply disappointing. 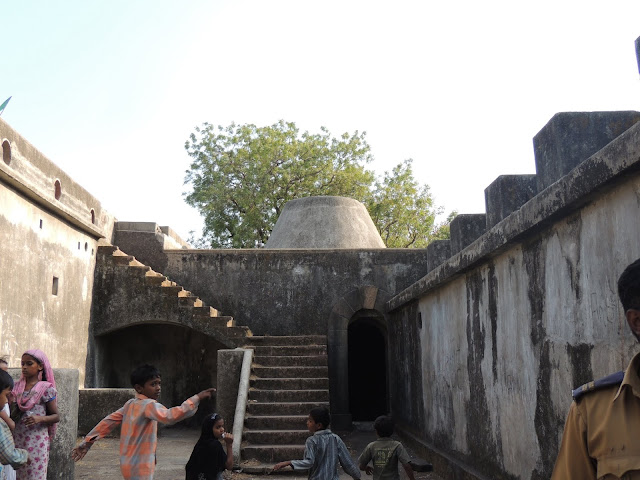 In spite of all this, traces of the structure remain and help us imagine what it might have been like, in a day when the place was solely used as a look-out at a time when war could break out anytime! 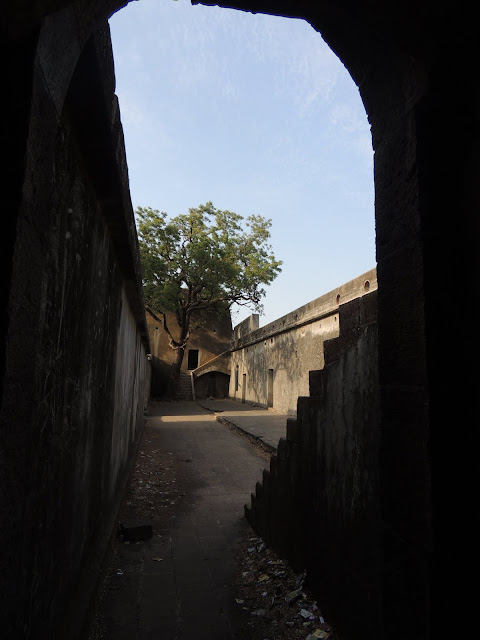 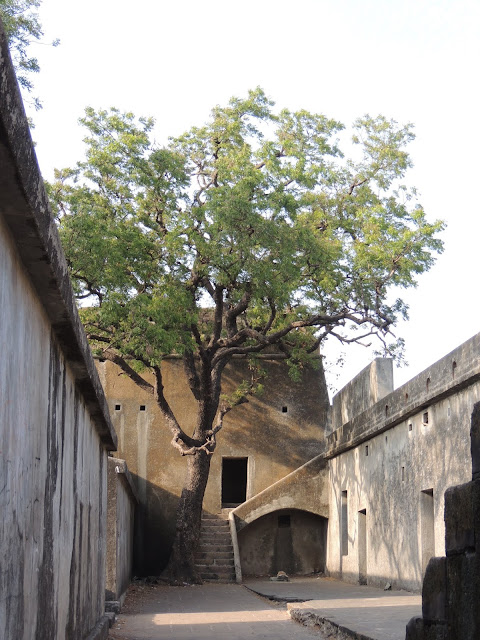 It is obvious that this must have been a functional fort – there are no embellishments, no decorations. It’s simply a watchtower, with space for those assigned to it. Everywhere there are holes, probably used for cannons or rifles. 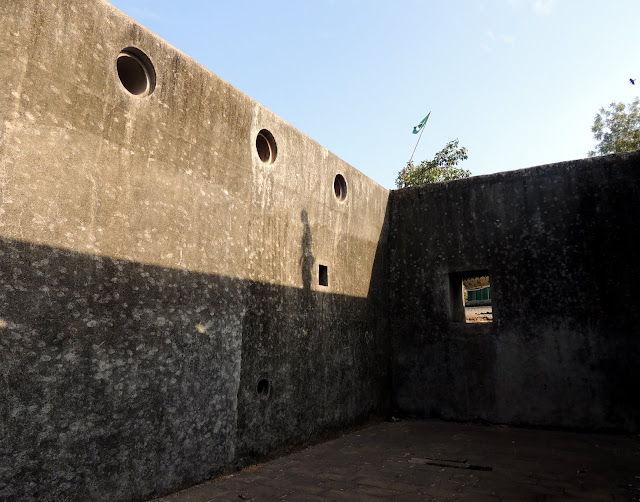 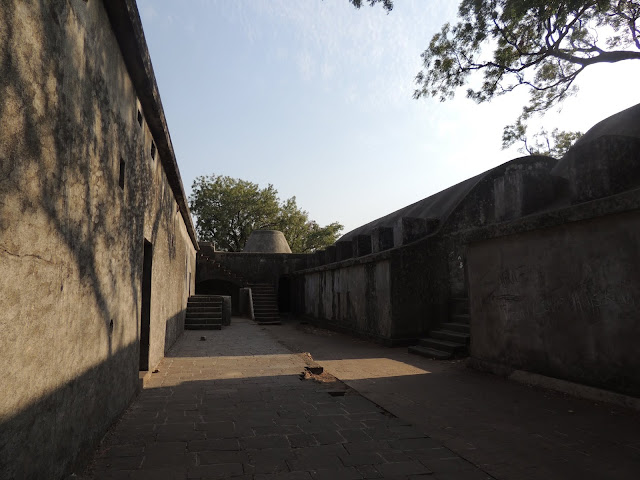 Though the fort is said to have been built in 1680, the date over the entrance says 1734.. or 1736, the variation coming from the way the last digit is inscribed... 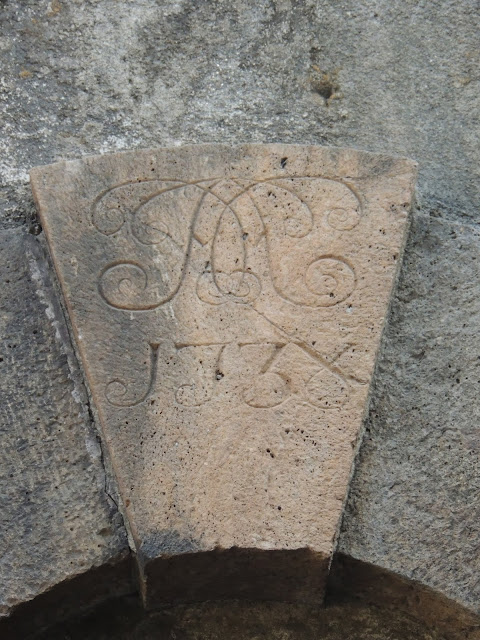 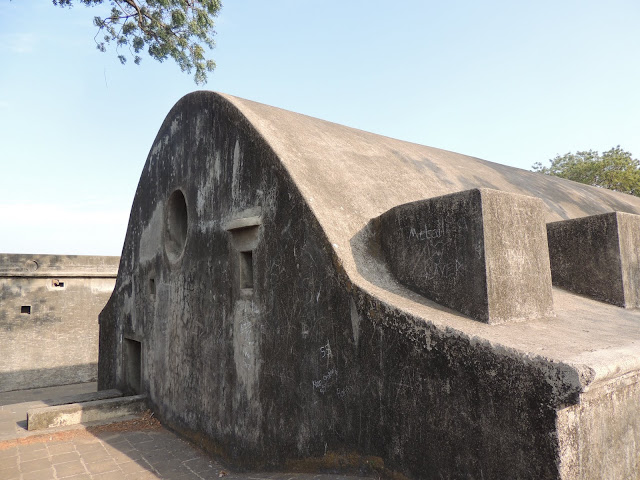 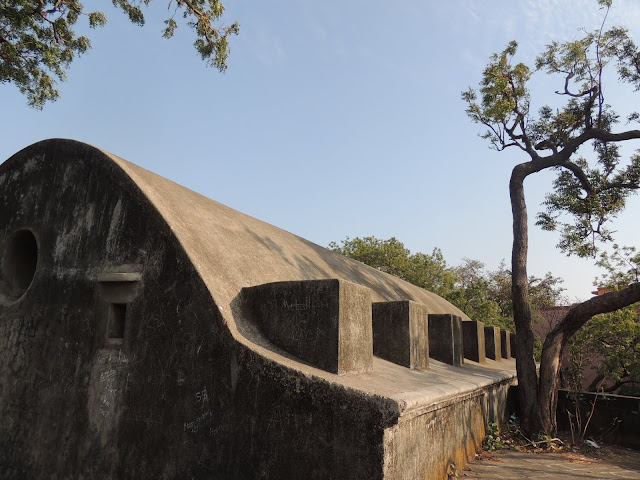 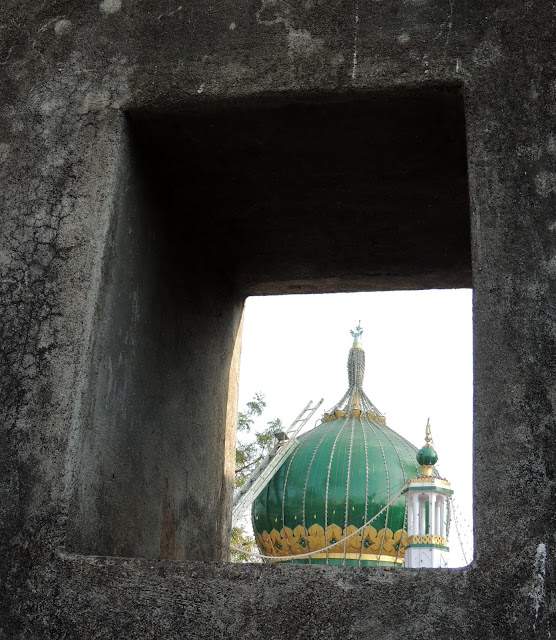 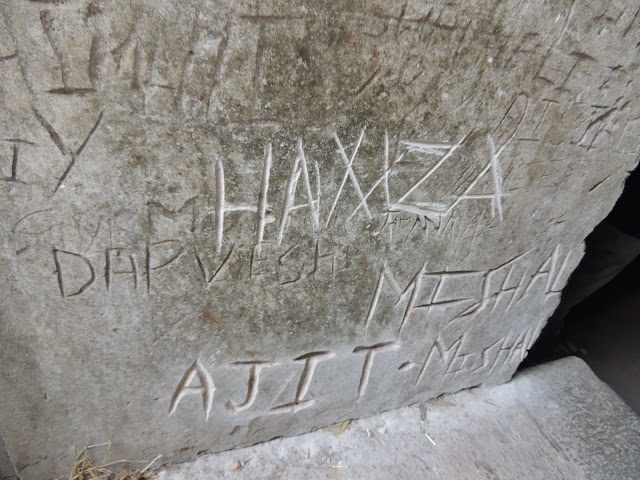 The staircases are interesting... most of them curved, but unfortunately, thanks to the renovation, only a few of them actually lead somewhere! 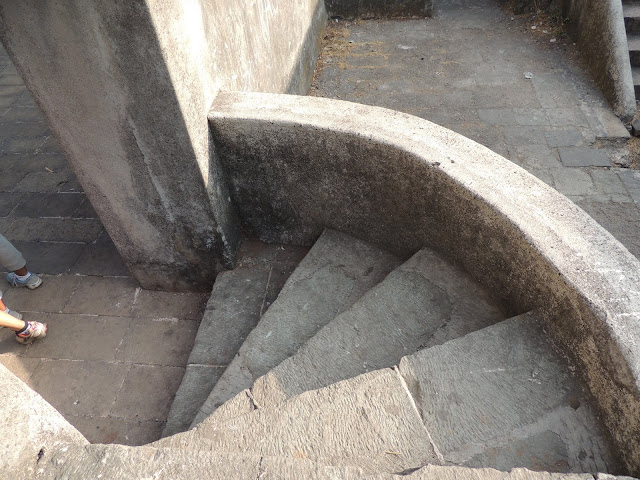 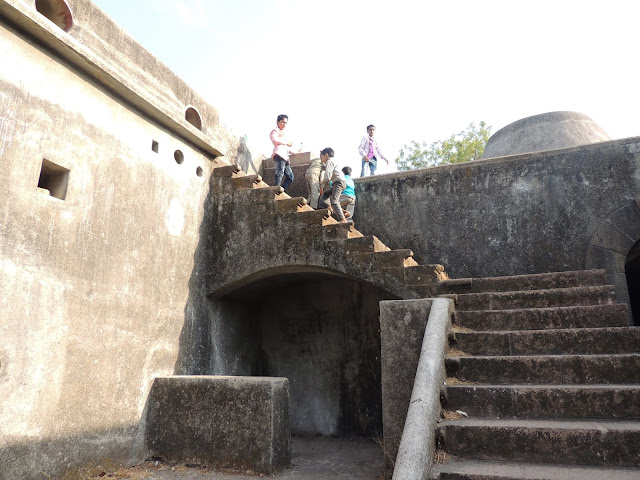 Also, so much work has been done that it is now almost impossible to distinguish the different renovations carried out in different eras. 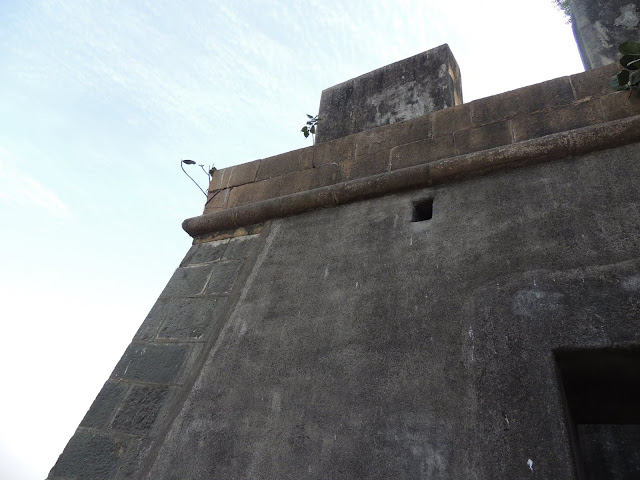 The best part of the fort is surely the view. On one side, you have an uninterrupted view of the sea... including the Gharapuri, or Elephanta Islands... 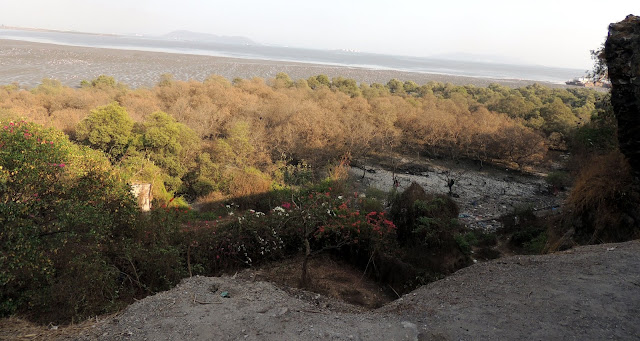 And on the other side, the view extends over Sewri – Wadala. If it weren’t for the high rises, we could probably see even further. 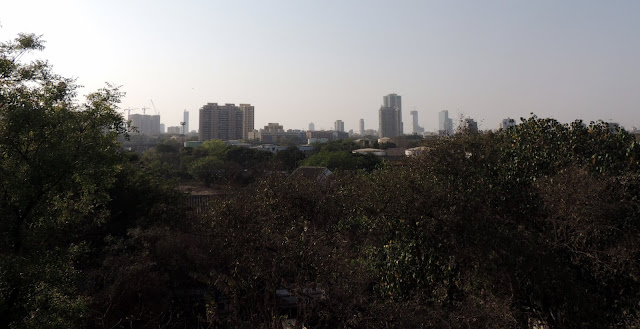 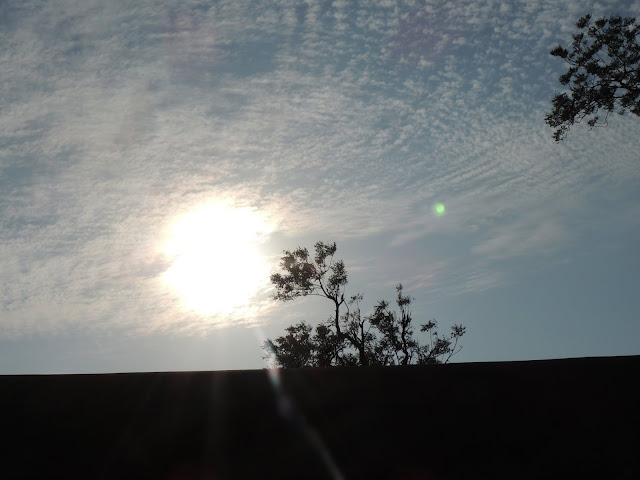 While I was searching for information about the fort, I realised that Mumbai once had 11 forts in all, of which 8 still remain, though mostly in ruins. Three have been demolished over the years. There are few cities in the world which can boast of such heritage, but it is sad to think that we hardly appreciate it. How many of us even know the forts within our city? And how many of them have we seen? Here is a timeline of the various forts in Mumbai. The image is from Wikipedia. For more information on the forts, click here.

My desire to visit the Sewri fort has now been fulfilled, but it has evoked another desire now... to visit all the forts left in Mumbai... or at least the ones which are open to the general public. Now let’s see how I can make that wish come true!