‘Amarnath’ one of the names of Lord Shiva, implies not simply that He is immortal, but that he is beyond immortality, above the concept of life and death, the one who controls all, death included. That is the very concept behind the holy shrine where He is known by that name. The Amarnath cave is situated in a terrain which is certainly among the toughest to cover, and the idol isn’t just a stone, but ice, or rather, water, which has no beginning and no end; which takes different forms, yet doesn’t lose its character; but above all, which sustains life itself! A journey to the Amarnath cave is thus not simply a visit to a shrine, but one which makes you think of life itself, to ponder on issues of life, death and everything in between. It is this thought that Aabha Vatsa puts forth in her book ‘Barfani Baba; To Amarnath, Happily’. 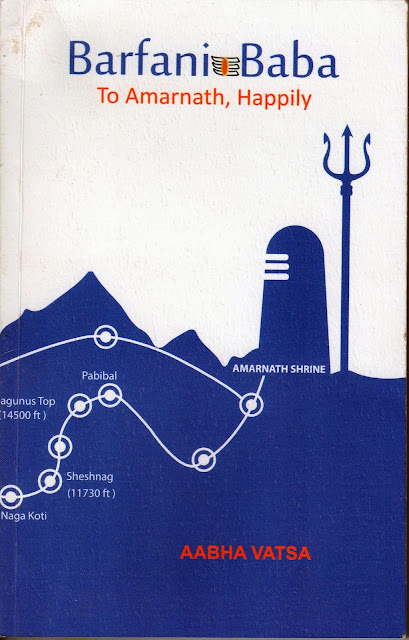 I have known Aabha for a while now, and though we have not yet met, we have connected through our blogs. When I heard she was off to Amarnath, I must confess to a tiny seed of jealousy, for her name was added to the long list of people I know who have been blessed to make the journey, and it rankled somewhere, that He hadn’t called me yet. And then again, there was the thought that I probably wasn’t ready for it. As of now, it was enough for me to read about it, and yearn for it..... and maybe the yearning would be fulfilled someday! Therefore, when Aabha asked me if I would like to read and review her book, I jumped at the chance.

‘Barfani Baba’ or ‘Lord of Ice’ is how Lord Amarnath is known, colloquially. Aabha’s choice of title is truly appropriate, for while the pilgrimage is all about a personal, spiritual quest, the yatra itself is one which relates more to the faith of the masses. People are drawn to the shrine for various reasons – spiritual, religious, curiosity, a personal test of endurance, and many others, but what carries most people through the most gruelling of challenges laid out by the harsh terrain, is faith – if not their own, that of their companions, their fellow yatris.

The book is a compilation of Aabha’s own experiences during the yatra, and she is honest and completely open about it all – from her enthusiasm to her fears, her beliefs to her doubts. It is a book which reassures people that the yatra is indeed possible for all, without covering up or passing over the difficulties and hardships.

Her candid description of the vital 48 hours of the yatra, where she struggles to hold herself upright, even on horses and palkhis, is something which reminded me of my very first pilgrimage to Kedarnath, as a young girl. Reading about her aches and pains, imagining her shivering in wet clothes, brought back memories of my mother and grandfather trudging into our room at Kedarnath, late in the night, amidst heavy snowfall. Her relief at seeing her daughter brought a smile to my face, and I remembered the thrill I felt, seeing my mom after we got separated on the path. These experiences are more than 25 years old, but reading the book made me relive those memories after a very long time.

It is experiences like these which make a pilgrimage memorable, but Aabha’s book is as much a fount of information as it is a travelogue. She intersperses her narrative with detailed information about various parts of the yatra. The information these days is easily available on websites, but through her experiences, you understand the reasons for the rules and regulations set out by the Amarnath Shrine Board for the yatra. The narrative and the information together can be really useful for someone who is planning to go on the yatra, whether by the trekking route, or by helicopter.

Aabha has chronicled her journey beautifully, from her initial excitement, to the practicalities, the fear and anxiety of the journey to the fulfilment on its completion. It is a book which underlines the spirituality of the journey, and makes you want to set off right away.