The Maharashtra Police Headquarters is a landmark at Colaba, for the road leading towards the Gateway of India. However, it wasn’t always known by this name. 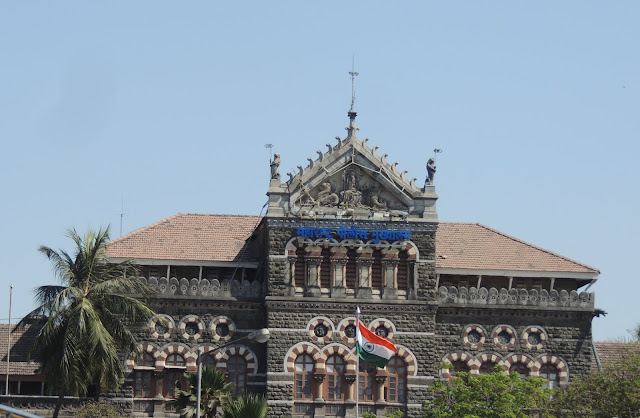 This was once the Royal Alfred Sailor’s Home, built in the 1870s to accommodate 20 officers and 100 seamen. It was originally conceived in 1870 to commemorate the visit of Prince Alfred, the Duke of Edinburgh, who laid the foundation, during his visit, at the end of Hornby row. However, the location was later changed, and when work finally began in 1872, the foundation stone was shifted here. Designed by the same architect responsible for such masterpieces as the VT station and the Municipal Corporation building, F.W.Stevens, the building took 4 years to build, and was opened in 1876.

The most arresting thing about the structure is the sculpture of Neptune on the pediment right at the top. 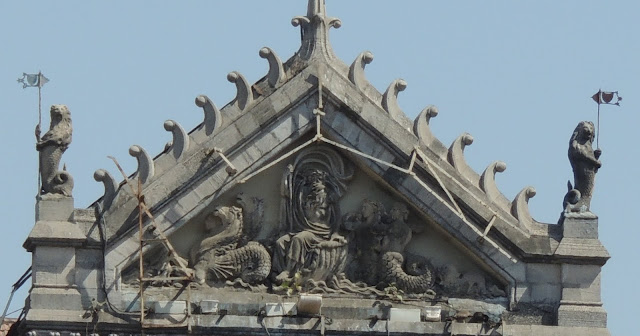 Neptune, the Roman God of the sea, is depicted surrounded by mythical creatures such as mer-people (male as well as female), and sea horses. He is seated on a shell, and is surrounded by waves of water. Flanking this panel are two stylised sea lions, fitting into the theme.

In the late 1930s, the building was acquired by the government and became the seat of the Bombay Legislative Council. Extensions were made to suit the increased usage, and the building remained the seat of the Legislative Council even post Independence, till a new building was constructed for the purpose in 1982. This one then was handed over to the Maharashtra Police Department, which has, since then, used it as its Headquarters.

If you are ever in Colaba, or visiting the Museum, stop a while to stare at the beautiful sculpture atop the building. You might not be allowed to get close, considering the security, but its size and location make it easily visible from across the road!


For more information, check out the Maharashtra Police Website.