Wayanad - Journeying into the wild at Muthanga Wildlife Sanctuary

July 08, 2013
“Are there tigers here? Will we see any wild animals? I don’t want to see just deer!” That was Samhith, protesting against our waiting in the long queue for the Jeep Safari at Muthanga Wildlife Sanctuary in Wayanad. Considering that he wasn’t even standing in the queue (it was our uncomplaining and patient guide doing so), his outburst wasn’t really justified, and I told him so. I reminded him of the Gaur and elephant we had seen in the forest en route to Wayanad, and reassured him that there were surely some wild animals in the jungle, and if he kept quiet and looked out for them, he would probably see some. Meanwhile, I kept my fingers crossed and prayed that we indeed would see something more interesting than ‘just deer’! 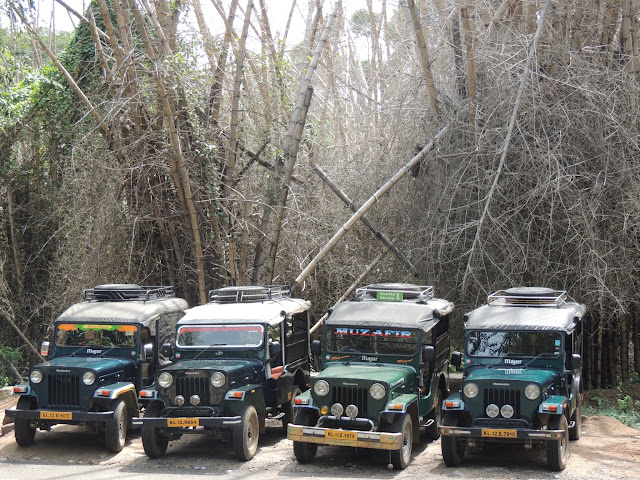 The Muthanga forest is part of the Wayanad Wildlife sanctuary, with its entry point near Sultan Bathery. It borders the Bandipur Reserve in Karnataka, and the area is known for regular elephant sightings, which draw crowds for the regular Jeep Safaris conducted by the forest department. Jeep Safaris are conducted twice daily, once at 7AM and then at 4PM. However, before we can set off on a jaunt into the jungle, we need to stand in never ending queue to buy our tickets, since people turn up hours in advance for the privilege! 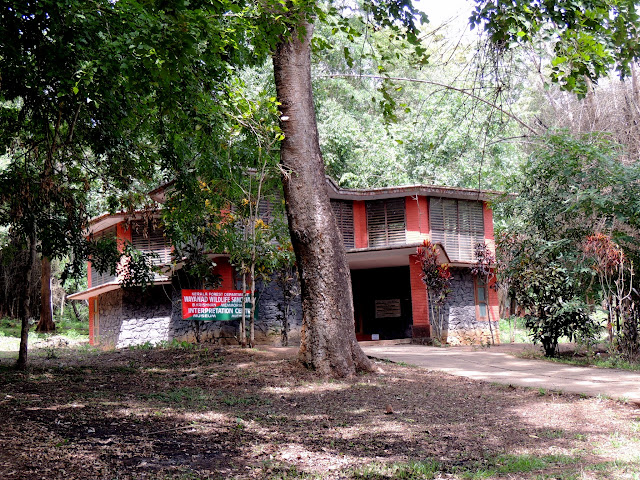 Waiting for our turn, we realised that there wasn’t much to do or see. A lone tea shop provided us some sustenance, and then we decided to go find out more about the forest and its environs. An interpretation centre showed promise, but it was unfortunately closed.  The forest office was a simple structure, with maps all over. With nothing else to do, we pored over the maps, which turned out to be quite informative, showing just how big the reserve forest was, as well as local places of interest. 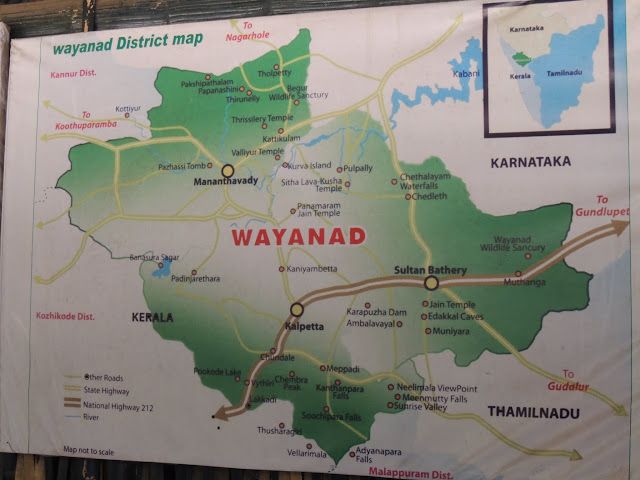 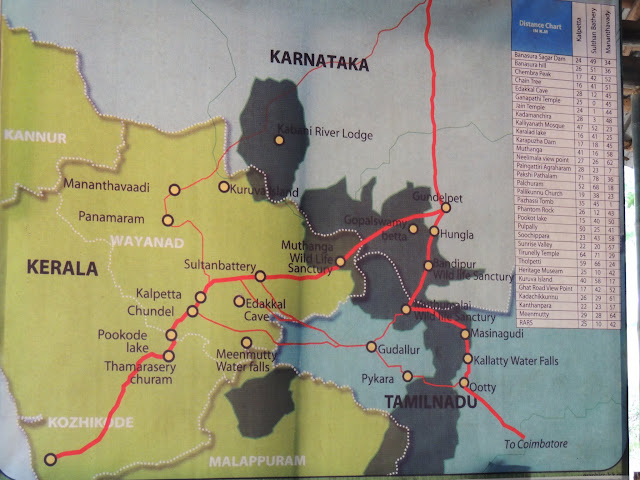 The maps and boards also informed us that we could stay within the forest itself. A bit of persistent questioning in a mixture of Tamil and English finally found us inside the forest office, in conversation with an official who confirmed the presence of cottages inside the forest, but seemed aghast at the thought that we might want to stay there! We reassured him that we were there for information alone, but that seemed equally baffling to him. Eventually, we returned with his assurance that rooms could be booked through the forest department by phone. “Details are on our website” he said, but sadly, as to the URL of the said website, he was clueless! 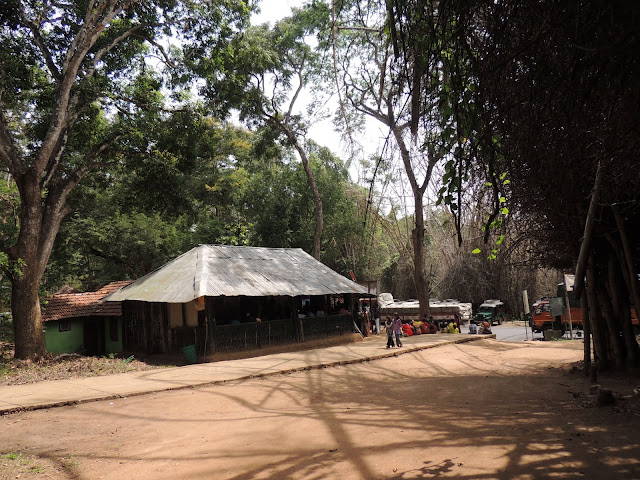 By the time we got back after our fruitless quest, the ticket queue seemed to have moved, and our guide was anxiously waiting for us, eager to set off. Our jeep had an interesting set of passengers – me and the guide discussing local flora and fauna as well as forest regulations, a newly married couple holding hands and looking all excited (probably at the thought of their first wild outing) and Samhith , sarcastically asking everyone what they thought we would see. 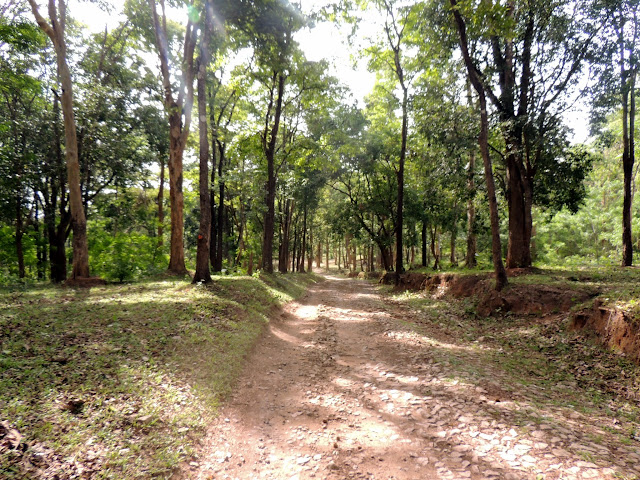 As the jeep lurched over the rougher-than-expected forest paths, the conversation turned to animals spotted recently. What everyone wanted to know was of course, if tigers had been seen! No matter how hard the ranger tried to change the conversation to other animals, the tiger invariably returned to the conversation, though the real animal remained just as elusive as ever! And then, the jeep suddenly braked to a halt, throwing us all off balance. There, right in front of us, emerging from a copse of trees, was an elephant – a tusker, no less! 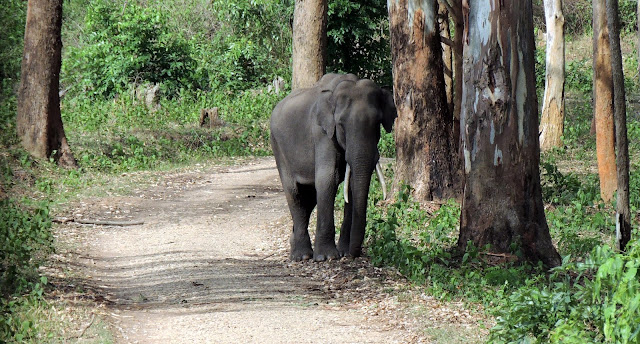 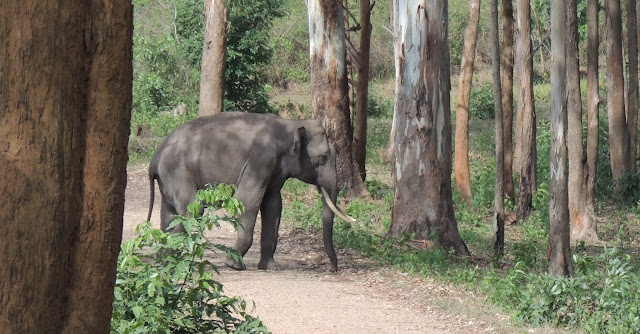 Our driver was a cautious man. He refused to go any closer, in fact, choosing to turn back and take another path, when the elephant showed no signs of wanting to move. Then suddenly came the sound of more jeeps, one of which sped ahead, frightening the elephant into the copse once again. The other jeeps thundered away, and we were left sadly pondering over the scare the elephant had been through. 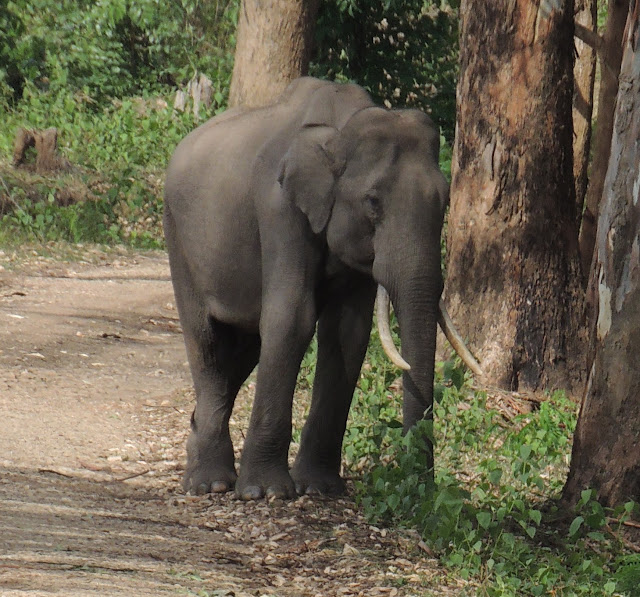 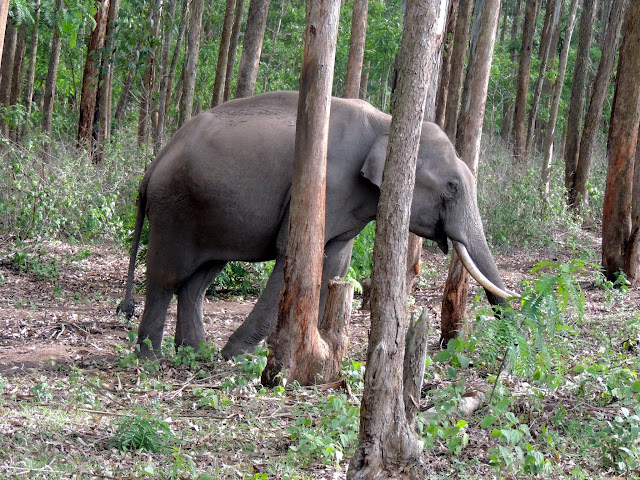 Interest in the safari having been rekindled by the elephant’s appearance, we went on ahead, stopping every now and then at the sight of deer, the only animals most commonly seen on safaris. “We saw an ant-eater here this morning” said the forest officer, and everyone stared, hoping it was still there. Of course it wasn’t. But there was something else. Something jumped from one branch of a tree to another. “Monkeys” said someone, disappointedly. “It’s a Malabar Giant Squirrel!” replied the driver. We craned our necks, anxious for a glimpse, and there it was, its trademark brown coat blending in beautifully with the forest canopy, visible only during movement. There was no use even trying for a photograph, so I let go and enjoyed the moment instead. 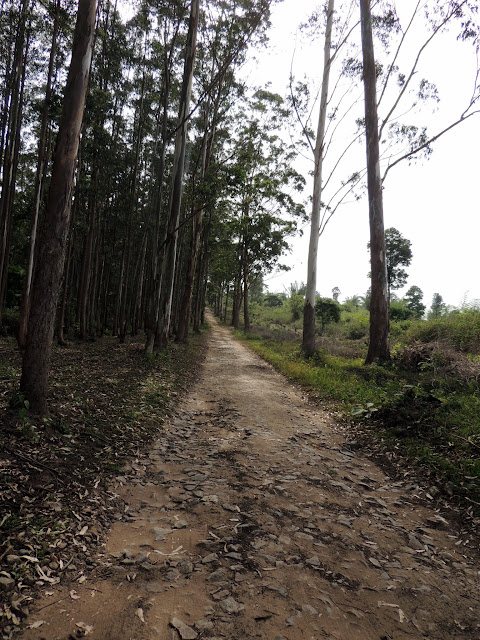 The squirrel sprinted away, as fast as it could, and we went our way, our enthusiasm now running high. A whole herd of spotted deer lazed by the side of a dried up lake, and I tried to get a decent shot. Meanwhile, Samhith and our guide had spotted something more interesting. A bird of prey hovered over the deer, and perching on a dry branch, showed off its brilliant colour in the sunlight. “Golden Eagle!!” exclaimed our guide, and Samhith’s day was made!

We spent an hour more in the jungle, but nothing came close to the exciting sightings in the first half. As we bid goodbye to the jungle and turned into the highway, Samhith had some last words to say - “Amma, we never imagined we would see a Malabar Giant Squirrel, or a Golden Eagle, did we!”

The Jeep Safaris at Muthanga are part of the Eco Tourism activities of the Kerala Forest Department. Detailed information is available at the following websites:

Jeep Safaris are held twice a day, at both, Muthanga as well as Tholpetty forest reserves. No prior booking is done for these safaris and tickets are issued at the counter an hour in advance.

Staying overnight inside the sanctuary is possible, and is sure to be a good experience. However, bookings are to be done only through the forest wardens. Contact numbers are given on the above websites.