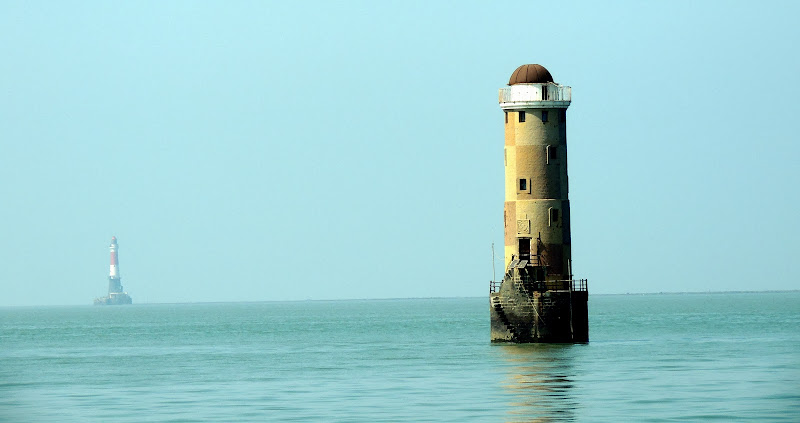 The Gateway of India is one place which is always teeming with crowds – tourists gawking at the Gateway or casting yearning glances at the luxury yachts, regulars sitting on the parapet wall, relishing a break from their routine lives, couples posing for cameras, kids chasing pigeons or feeding gulls, people waiting for ferries – either for a joy ride or to get to the Elephanta Island, or even to Alibag. If the shore is a teeming mass of people, the sea here is a melee too, with ferries, launches, yachts and fishing boats, all jostling for space. Amidst all this chaos, stands a small structure, forgotten and unnoticed.


This is the Dolphin Rock Lighthouse, built in 1856 to help ships find their way into the port. 58 feet tall, the lighthouse is unattended, and exhibits a white-green occulting light every 4 seconds, with a visibility of 7 miles. I have no idea if the lighthouse is still used, invisible as it stands among all the boats which dock at the Gateway Jetty.

Interestingly, this is just one of the three lighthouses in Mumbai Harbour.

The Sunk Rock Lighthouse was built in 1884, about 5 Km from the Gateway of India. This is an operational, though unattended lighthouse, 66ft tall, showing a red light with white rays flashing every 6 seconds.

The Prongs Lighthouse is among the most well-known among the lighthouses of Mumbai. After all, its tapering, 144 ft high tower is visible from Colaba, and can be accessed on foot during low tide (with all due permissions of course!).

This is also the only manned lighthouse in the area (and among the few offshore lighthouses in the world still staffed), used even today for the purpose it was built, in 1874. This lighthouse marks the entrance to Mumbai Harbour, and replaced the onshore Colaba Point lighthouse, of which no trace remains today. This lighthouse is located about 2.5 Km off the southernmost tip of Colaba, and emits a white flash every 10 seconds.

Further away, between Mumbai and Alibag, lies the Kennery Lighthouse, now called the Kanhoji Angre Lighthouse, on what was known as the island of Khanderi. The island was once in the hands of the Portuguese, who built a fort there. It was later occupied by the Marathas, and eventually, by the British, who built the lighthouse in 1867. This lighthouse is no longer operational, but is in the process of being developed into a tourist destination.

These lighthouses serve to remind us that Mumbai grew into the city it is, all because of its natural harbour. The port has played an important role in the development of the city, and continues to do so. These lighthouses, small and big, have played their part through history, standing as silent sentinels.  Yet we know so little of them, which is why it is so good to see the Mumbai Port Trust making an effort to open up its glorious history to visitors and tourists. I was able to visit these three lighthouses (I have yet to visit the Kennery Lighthouse), thanks to the collaboration between the Kala Ghoda association and the Mumbai Port Trust, which led to the Mumbai Port and Harbour Tour being conducted during KGAF 2014.

This post is simply one portion of the tour, and comes first simply because I was so fascinated by these lighthouses, some of which I had never heard of before. However, there were more interesting things we saw along the way, and coming up next is a photo blog of the tour itself.

The massive turnout for the tour, despite the early hour was a clear indication of just how interested people were, in tours like this, and was a shout to both, the Kala Ghoda Association, as well as the Mumbai Port Trust to conduct more such tours in the future. The Port Trust apparently has plans for regular such tours in the near future, and I hope it starts off soon.

The Dolphin Rock Lighthouse can be seen from the Gateway of India. You can see it better when you go on a boat ride, but you can still catch a glimpse of it between all the boats moored at the jetty.

The Sunk Rock Lighthouse can only be approached by boat. However, you can only see the lighthouse from a distance, since entry is prohibited, and so is approaching too close.

The Prongs Lighthouse is managed by the Directorate of Lighthouses and Lightships, and permission to visit needs to be taken from them. The lighthouse can be approached by the sea as well as land. Approach by boat is risky, since fishermen lay nets in this area. Also, permissions are needed from the Port Trust as well as the Naval authorities, due to the location. The lighthouse can be approached from the reefs during low tide, and involves a trek of about 2.5 Km each way. However, the approach is once again through Naval land, so permissions are needed.

If you can get through all these permissions from all these authorities, I am sure you will have a wonderful experience (and also lots to talk about!). However, if you, like me, would much rather wait for the Mumbai Port Trust to begin tours to the Lighthouse, we can but hope that it begins soon!