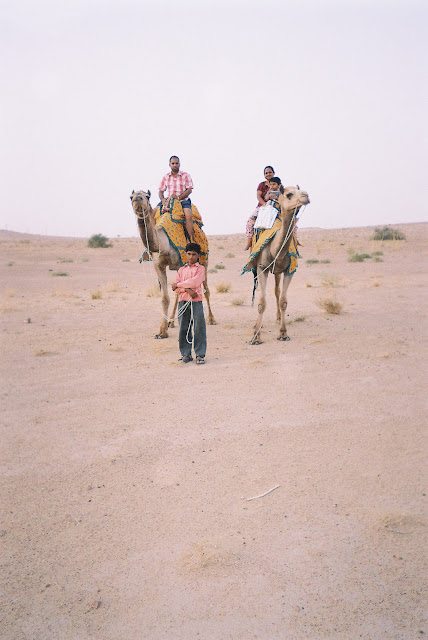 Sand and water have much in common.....One always associates the sea with the seaside, that is, the beaches. When we had been to Bordi, we were amazed to see only sand as far as eyes could see. It was low tide then, and the water was far far away.
Yet, one also associates sand to deserts. For there also, there is sand as far as eyes can see. Truly, Sand and the Sea have much in common. From where one stands, one can see only the same view, stretching, maybe to the end of the world.
As we stood on the sand dunes of Jaisalmer, surrounded by sand on all sides, we felt really small... It was so easy to get lost in the never-ending desert...if it wasn't for the guide with us..It was scary, but so beautiful...nature at her rawest... One admires the people who live there. It is probably only because they have been born there, and have it in their blood that they can survive there. It is so easy for an outsider to succumb to the vagaries of nature in that land....unbearable heat in the summer, and long, cold nights in the winter. It is the basic rule of survival of the fittest, which rules the place and one can not but help admire the people who have survived in such a place.

The Jaisalmer Fort ---Views of the fort, and the city as seen from the fort 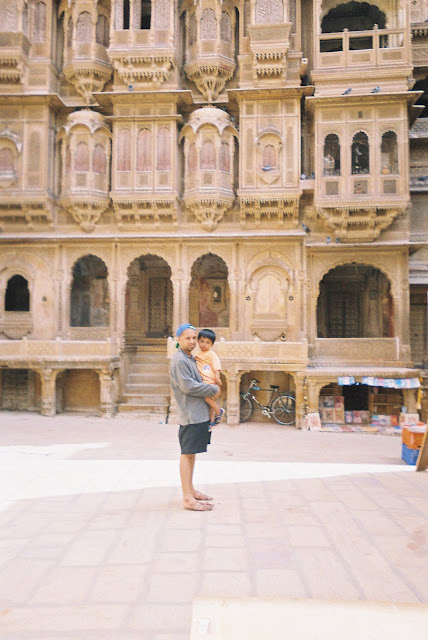 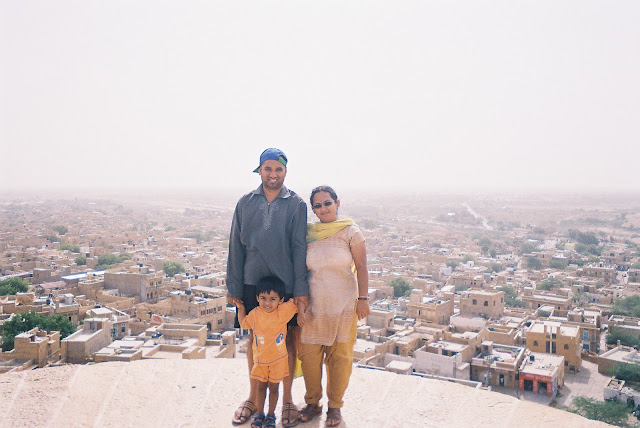 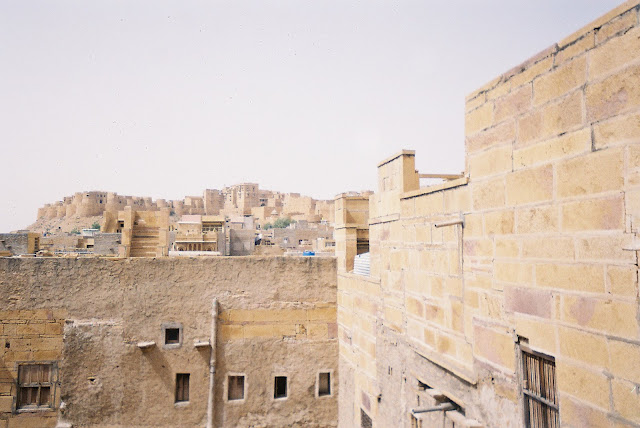 It is such people who have made Jaisalmer what it is today. The Kings who ruled this land were proud and brave, and they built a beautiful fort, which, till today guards a city full of life, within its walls. According to our guide, it is the only fort in India, where people still live. In his words, it is "A Living Fort". And what a beautiful one! Like the other forts of Rajasthan, this one too is well maintained. But, unlike the other forts, here, one can catch a glimpse of what life was like, within the walls of a fort. Narrow streets take one around the fort, within which, everyone knows everyone else. There are people pursuing professions which their great grandfathers practiced, and enjoying it ! Since the fort is a heritage site, there haven't been many changes inside, and people live in the same houses their ancestors lived in, of course with slight modifications. This lends a genuine aura to the place, which makes it a hot tourist destination. And that brings me to an interesting fact. Tourism brings in the highest revenue here, and everyone wants to have a hand in the pie. So, as our guide told us "Children all over the world learn their mother tongue first, and then the local language of the area. However, in Jaisalmer, the first language a child learns is English, followed by French and Spanish. Many children know Italian and German too. Hindi is a secondary language for them. After all, how many tourists actually speak Hindi? As far as our mother tongue is concerned, it is a dying language. No one speaks it any more. One can earn in foreign currency by speaking in the language of the tourist. Hindi brings in little, but Marwadi, nothing at all!”A very logical reasoning, borne by the truth of his words. I could see so many children conversing in foreign languages, with an ease that comes only with regular conversation, not learning. I myself have learnt French, and actually considered myself to be good at speaking the language, but honestly, I didn't have the guts to try out my language skills on them... they were so much better at it !

Among the places we visited was the Gadi Sagar Lake. It was once the source of water supply to the city, for the lake was built in such a way that there is water throughout the year. A miracle by itself, to build a like in the middle of a desert, and also have water in it. The lake is filled with catfish, which are held to be sacred by the locals. No one would dare to try to fish in the lake! On the contrary, people come and feed the fish daily, as a sort of a vow! The fish have grown to enormous sizes, and the sight of them leaping to catch the crumbs thrown by the people is an impressive one. 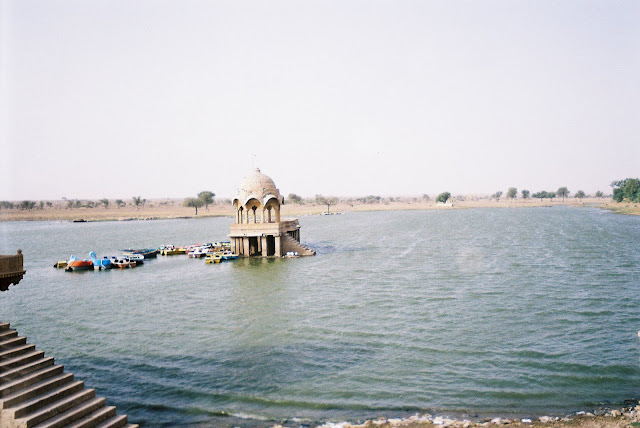 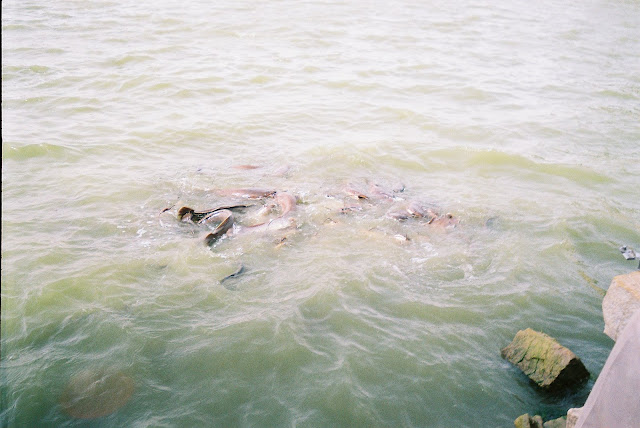 The Gadi Sagar Lake and the catfish

An interesting story goes along with the lake. This is the place where the Gangaur festival takes place, attended by the royalty. It seems that at one time, there was a prostitute in the area, who was very rich. She wanted to build something that she would be remembered for, after her death. And, being a gutsy woman, she wanted to turn up her thumb in the royalty. So, she got a huge arch built at the entrance of the lake, through which the King would have to pass during the festival. The king, would, in effect be bowing before her structure. Needless to say, the royalty wasn't impressed, and plans were made to tear down the structure. This is when the resourceful woman showed her mettle, by constructing a small temple on the arch, overnight. No one in India will knowingly destroy a temple, and the arch stands there to this day. Checkmated by the prostitute, the King pretended to ignore the arch, and entered the premises from one side. To this day, the practice continues, with the kings not using the arch as an entrance.

The Famous Arch on the Gadi Sagar Lake 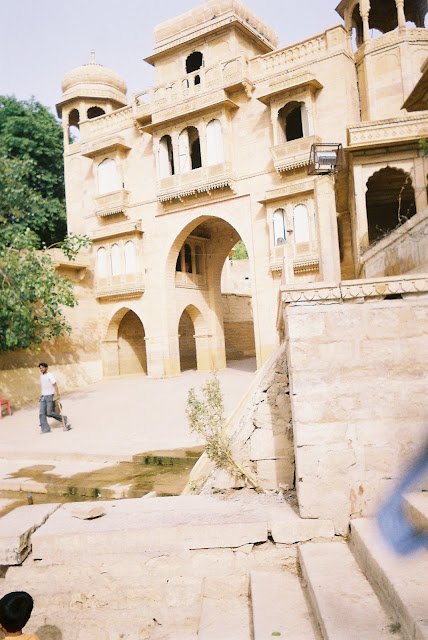 The old Havelis are a major tourist attraction in Jaisalmer, and rightly so. They are huge, and palatial, and belong to the erstwhile landlords of the area. They seem to be next in the rung after the royalty, and were as conscious of their comforts. The beautiful carvings and the architecture of the houses are worth a closer look.

We visited Jaisalmer in June, when it was hot, but not as hot it would have been in peak summer. It was the off season, and there weren't many tourists around. What I mean is that there weren't many foreigners around. The only tourists were Indians like us, on their holidays just before schools reopened. The guides told us that during the peak season, all the hotels would be full, and tents put up all along the roads. Most people came to stay in the tents. That was when the local performers would be around, lending a genuine touch to the heritage sites. From one and all, we heard about the festival season, when Jodhpur and Jaisalmer could be seen at their best.

I beg to differ. Of course, the festivals and the festivities are what make India the unique country that she is, and that is what people come to see and be a part of, from all over the world. Undoubtedly, that would be a great experience. However, one must not forget that these are places where all the population lived in a very small area, within the fort for instance. Outside the fort were vast open spaces, which have remained so, because of nature being what she is, a bit difficult to manage. The feelings and thoughts that permeate the atmosphere in such seclusion are never possible when there is a crowd. Just for that reason, I would like to go back there, again during off season. I can not forget the wonderful feeling I had, of being on top of the world, when I looked down from the fort, or the feeling of oneness with nature, which I felt on the never-ending sand dunes, or simply the pleasure of sliding and rolling down the sand dunes with my son. It is a feeling that stays with me, and one that I would encourage others also to experience. 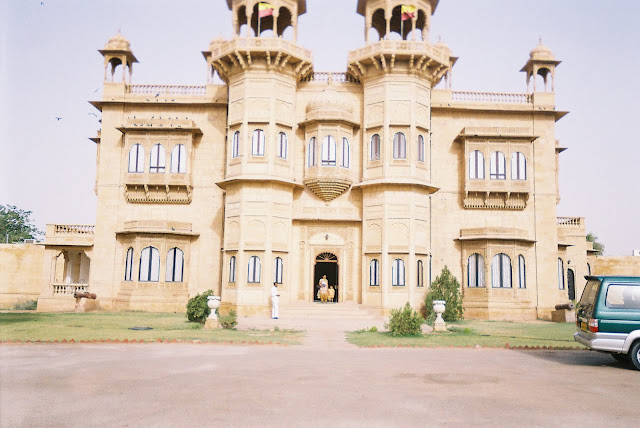 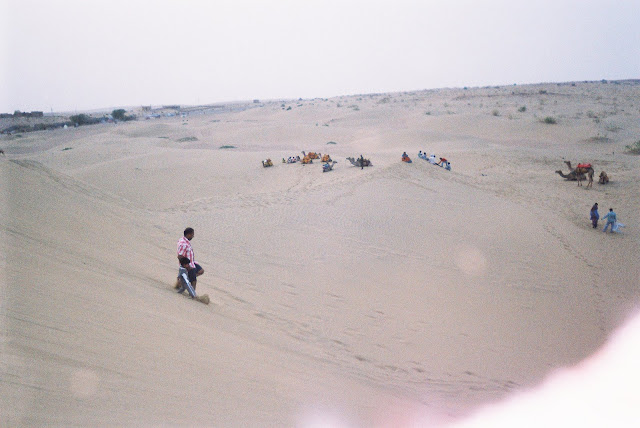 The Jawahar Mahal Palace Hotel, where we stayed & Fun on the Sand